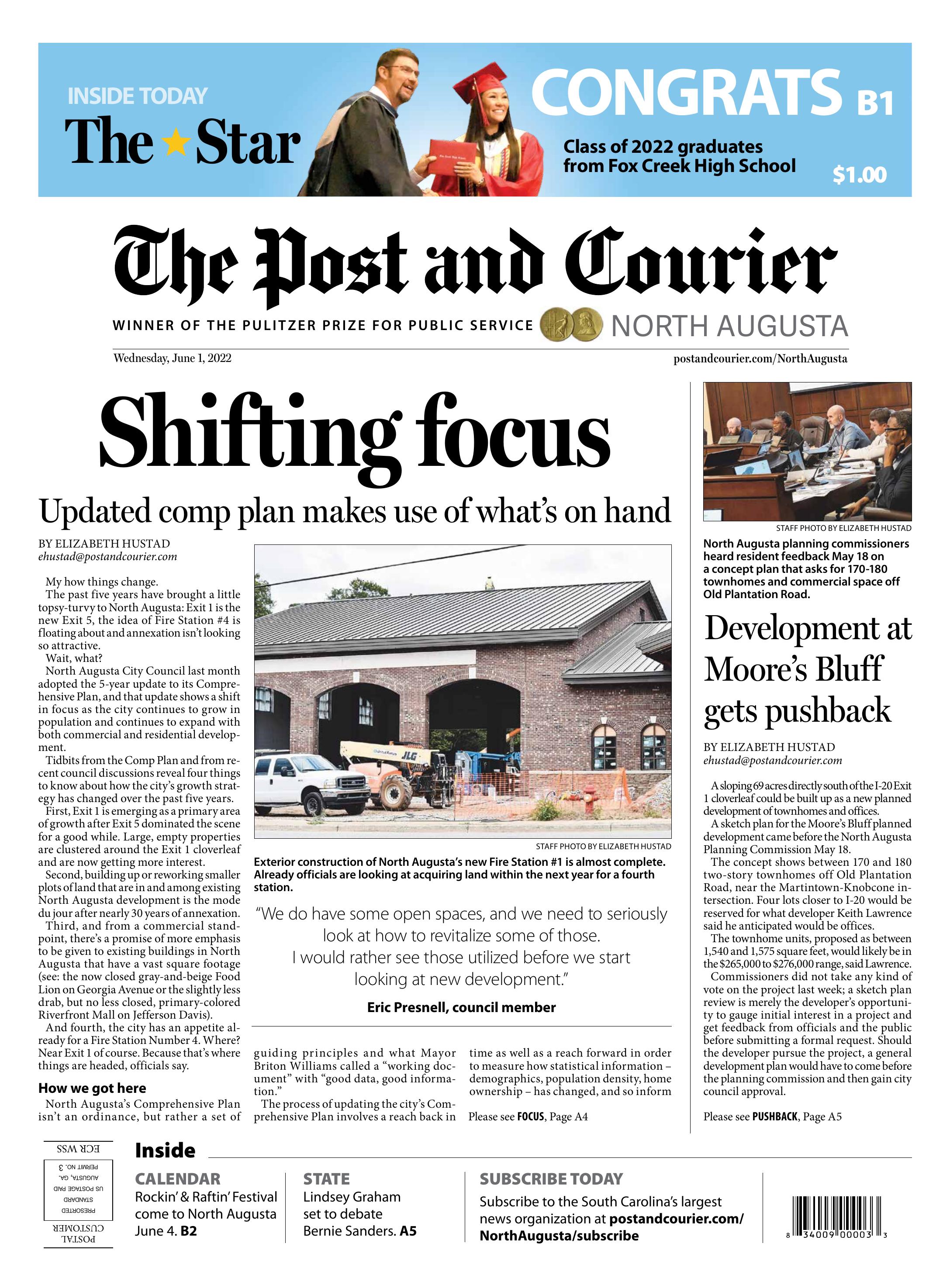 Exterior construction of North Augusta's new Fire Station #1 is almost complete. Already officials are looking at acquiring land within the next year for a fourth station.

My how things change.

The past five years have brought a little topsy-turvy to North Augusta: Exit 1 is the new Exit 5, the idea of Fire Station #4 is floating about and annexation isn't looking so attractive.

North Augusta City Council last month adopted the 5-year update to its Comprehensive Plan, and that update shows a shift in focus as the city continues to grow in population and continues to expand with both commercial and residential development.

Tidbits from the Comp Plan and from recent council discussions reveal four things to know about how the city's growth strategy has changed over the past five years.

First, Exit 1 is emerging as a primary area of growth after Exit 5 dominated the scene for a good while. Large, empty properties are clustered around the Exit 1 cloverleaf and are now getting more interest.

Second, building up or reworking smaller plots of land that are in and among existing North Augusta development is the mode du jour after nearly 30 years of annexation.

Third, and from a commercial standpoint, there's a promise of more emphasis to be given to existing buildings in North Augusta that have a vast square footage (see: the now closed gray-and-beige Food Lion on Georgia Avenue or the slightly less drab, but no less closed, primary-colored Riverfront Mall on Jefferson Davis).

And fourth, the city has an appetite already for a Fire Station Number 4. Where? Near Exit 1 of course. Because that's where things are headed, officials say.

How we got here

North Augusta's Comprehensive Plan isn't an ordinance, but rather a set of guiding principles and what Mayor Briton Williams called a "working document" with "good data, good information."

The process of updating the city's Comprehensive Plan involves a reach back in time as well as a reach forward in order to measure how statistical information – demographics, population density, home ownership – has changed, and so inform

recommendations on how and where to invest in such areas as public safety, street and water infrastructure or the park system.

The last update to the plan, prior to that approved last month, was adopted in 2017 just before Project Jackson and Riverside Village came to North Augusta. Again, my how things change.

One of the new highlights of the Comp Plan is neighborhood investment that emphasizes "large undeveloped or underdeveloped parcels with potential to grow inwardly and compactly in inner-city core areas."

Officials have time and again this year iterated that going forward, annexation would have to be strategic; not the almost carte blanche addition of acreage that began three decades ago.

And many of those "large undeveloped or underdeveloped parcels" in North Augusta are off Exit 1.

The land for that concept – which still is in its earliest stages – is across from an apartment development that is now in phase one of construction. Fifty acres of vacant land known as the McKie property lies just southeast of these two projects, while the 180-acre Hamrick Farms development is directly northeast.

Though annexation will remain part of the city's growth in future, updates to the Comprehensive Plan also show a shift in focus toward making more out of what is already here, both in land and in commercial buildings.

The Comp Plan recommends greater investment in "existing commercial hubs" that are "ripe for redevelopment."

"We do have some open spaces, and we need to seriously look at how to revitalize some of those," said council member Eric Presnell during council's May 16 discussion. "I would rather see those utilized before we start looking at new development."

There's 80,000 square feet of empty retail space in Riverfront Mall, which had been home to some 240 antique vendors until Riverside Antiques moved out at the end of last year.

The old Food Lion on Georgia Avenue is also empty with 32,550 square feet of space to offer.

Both structures date to the 1970s. And the Food Lion building looks like it's taken a pair of giant boxer's fists to its head: two holes either side of the entrance are prominent in the woodwork.

One '70s-era building, though, the old Carpet Shop at the entry to North Augusta's downtown, has a more definite future now that a local developer has purchased it (and the adjacent property) with the intention to revitalize it as commercial restaurant and office space before next summer.

But realizing a vision for what already exists – especially if what exists is empty land with a clean slate of opportunity – can be challenging, officials say.

That's the "in-fill" development that city leaders have been talking about lately: smaller plots of land suitable for one or two offices or a single home.

"I think the big issue we're going to have, and we've already seen instances of it – nobody wants their neighborhood touched, they don't want it next to them. That is something we are going to have to look at very hard," said council member Presnell.

Even a concept for a possible development near the Rapids that has come before the city so far only as a sketch plan, had generated "phone calls left and right," he added.

A Fire Station #4 doesn't exist yet as more than a fancy, but it will be a near-future need, officials say.

So, while exterior construction of the new Station #1 is nearing completion on Martintown and with the hope that fire engines will be leaving that station's bays by Labor Day, the first whisperings of land acquisition for a fourth station are taking place.

"We see the growth. Where it's going to be, where it's been coming. You can't ride through North Augusta without seeing the construction that's going on," said Chief Thomas. "There's going to be an abundance of people in certain areas."

Distribution maps that show North Augusta's existing three stations' service routes are guiding officials as they determine where coverage might need to be boosted as development continues.

These maps, plus activity coming to the planning commission, have narrowed scope on where that next station needs to go.

City leaders have already identified the area of West Martintown and I-20, near Knobcone Avenue, as priority due to the expected growth in that area, both in new development and in expansions to existing developments.

North Augusta city administrator Jim Clifford informed city council members last month that "nascent discussions" with property owners were already taking place and that the city has the appetite to acquire the necessary acreage for a future fire station within the next 12 months.

Projects like the River Falls apartments and Hamrick Farms are already at the "outer limit" of the city's existing fire coverage, said Clifford.

A specific parcel for Station #4 hasn't yet come before elected officials, but the options are being sought now for their future input and approval.

""I think the big issue we're going to have, and we've already seen instances of it – nobody wants their neighborhood touched, they don't want it next to them. That is something we are going to have to look at very hard."

"We do have some open spaces, and we need to seriously look at how to revitalize some of those. I would rather see those utilized before we start looking at new development."

North Augusta planning commissioners heard resident feedback May 18 on a concept plan that asks for 170-180 townhomes and commercial space off Old Plantation Road.

A sloping 69 acres directly south of the I-20 Exit 1 cloverleaf could be built up as a new planned development of townhomes and offices.

A sketch plan for the Moore's Bluff planned development came before the North Augusta Planning Commission May 18.

The concept shows between 170 and 180 two-story townhomes off Old Plantation Road, near the Martintown-Knobcone intersection. Four lots closer to I-20 would be reserved for what developer Keith Lawrence said he anticipated would be offices.

Commissioners did not take any kind of vote on the project last week; a sketch plan review is merely the developer's opportunity to gauge initial interest in a project and get feedback from officials and the public before submitting a formal request. Should the developer pursue the project, a general development plan would have to come before the planning commission and then gain city council approval.

That was good news for the 30-some people who came to the Municipal building last Wednesday. Many of those who filled the third-floor gallery weren't too keen on what they saw.

Traffic was the main point of contention, and particularly traffic in the aggregate.

"Even at the sketch level, we need to have a plan for that [traffic] before we allow people to start grading, doing wetlands mitigation and all these other things," said one resident last Wednesday, working off of the comments of the woman who spoke before him and who questioned whether it wasn't "putting the cart before the horse" to move forward with a project before having a holistic traffic plan in place.

The very section of Martintown where Moore's Bluff has been proposed was part of the traffic study that the city of North Augusta adopted last April and that officials have said they'd like to revisit sometime this year.

And the 1.1 miles that were the focus of that study — the 1.1 miles from Knobcone Avenue to Gregory Lake Road — have fast caught the eyes of developers.

The River Falls apartments, adjacent to the proposed Moore's Bluff development, are now in phase one of construction. About 180 acres of mixed-use development, the Hamrick Farms project, is also moving forward to stretch along the southside of I-20, just east of Exit 1.

Also on Martintown, just south of that specific 1.1-mile corridor of the traffic study, are 50 acres that have been proposed for a mixed residential development across from TrueNorth Church.

And at the northern end of that corridor, commissioners last Wednesday and immediately prior to reviewing the Moore's Bluff sketch plan, recommended by a 4-2 vote that council annex 43 acres near the Martintown-Gregory Lake intersection to accommodate 150 residential units.

"Is there a limit to the number of cars that that stretch of Martintown can accommodate?" asked one resident.

The collective impact of development on the city of North Augusta was a focus point for commissioners and council members when they held a joint session earlier this spring.

At that time, planning commission chair Dr. Christine Crawford had said it can be a challenge to get developers to look beyond their own projects and see what the city might have to face traffic-wise when those projects are added up.

That line of thinking came up again last week, with commissioner JoAnn McKie saying that with continued development in North Augusta not slowing down, a fix to the traffic problem had to be in the forefront for the city's decision-makers.

"Things have changed on Martintown Road, and we might as well figure it out and how we're going to make it work better," she said.