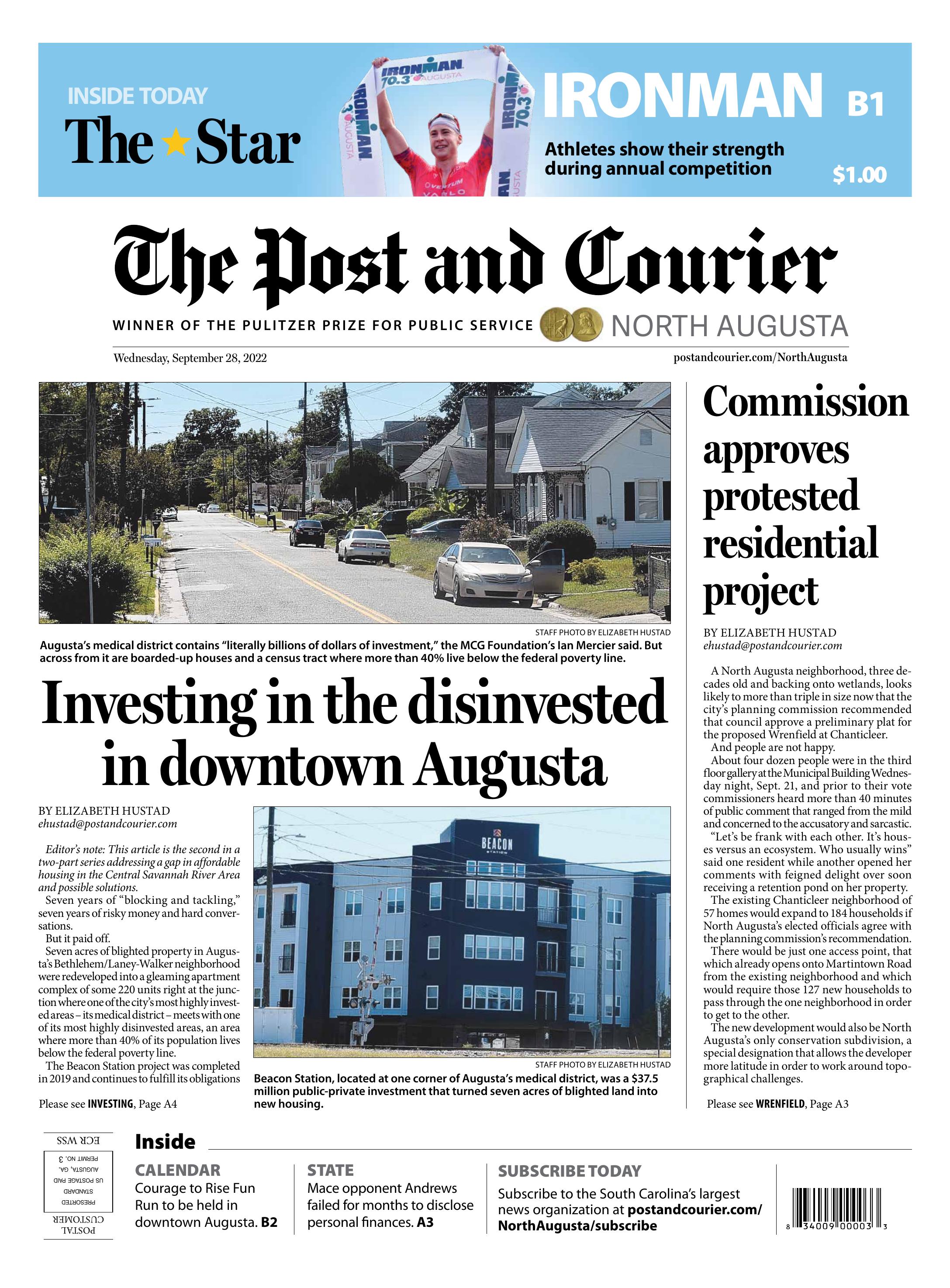 Augusta's medical district contains "literally billions of dollars of investment," the MCG Foundation's Ian Mercier said. But across from it are boarded-up houses and a census tract where more than 40% live below the federal poverty line.

Beacon Station, located at one corner of Augusta's medical district, was a $37.5 million public-private investment that turned seven acres of blighted land into new housing.

Editor's note: This article is the second in a two-part series addressing a gap in affordable housing in the Central Savannah River Area and possible solutions.

But it paid off.

Seven acres of blighted property in Augusta's Bethlehem/Laney-Walker neighborhood were redeveloped into a gleaming apartment complex of some 220 units right at the junction where one of the city's most highly invested areas – its medical district – meets with one of its most highly disinvested areas, an area where more than 40% of its population lives below the federal poverty line.

to the city of Augusta, which had floated a $37.5 million General Obligation bond in what developer Jakob Von Trapp said might be the first of its kind master lease agreement between a municipality and a developer.

"It was a huge political risk," said Von Trapp. But it was also "one big, courageous decision by the government, at scale, in a prominent location" that helped create more economic activity in the neighborhood.

Investing in the disinvested: Laney-Walker

Von Trapp was one of many industry professionals who attended the National Community Development Association's (NCDA's) Region IV conference in downtown Augusta earlier this month.

Michael German, a former representative to the federal Department of Housing and Urban Development (HUD) for Alabama, was another attendee, and he had much to say about the state of his own childhood neighborhood in Montgomery, recalling a street of boarded up homes.

"I think that's a reality we see when we go through a lot of places," he said. "How do we salvage these communities where people live?"

About a mile and a half north of Augusta's Beacon Station is another public-private investment at another corner of the city's medical district.

The $33.5 million HUB for Community Innovation opened at the corner of Chafee Avenue and Fenwick Street in June.

Its purveyors included such disparate groups as Augusta National, Augusta University, the Community Foundation for the CSRA and the Boys and Girls Clubs of Greater Augusta. Its funding was a mix of corporate investment, federal grant dollars from the Choice Neighborhoods program and New Market Tax Credits.

The city of Augusta has been pushing to reverse years of disinvestment in the predominantly African American Laney-Walker neighborhood and the historic mill district of Harrisburg, which lost much of its economic power when the textile industry vacated the U.S. en masse during the late 1990s.

Data for the 30901 Zip Code, which includes Augusta University and the Laney-Walker neighborhood, show that 43% of the population lives below the federal poverty line. Median household incomes are $21,300 and the area has a housing vacancy rate of 21.4%.

A map of 30901 that shows the area's level of distress is a stark image.

A Distressed Communities Index is a score given to an area by analyzing such demographic statistics as housing vacancy, joblessness and percent change in jobs available.

The map of the 30901 Zip Code is nearly all a bright orange, considered 99.7% distressed – except for a tiny white smudge in the middle: Augusta University.

The Medical College of Georgia, the Dental College, research buildings, a cancer center, "literally billions of dollars of investment," said Ian Mercier, president and CEO of the MCG Foundation.

All of it can be seen from a pin drop on Google Maps. "And you can spin that [view] and look on the exact opposite side of the same street, and you'll see 800-square-foot, thousand-square-foot houses that are falling apart. Bad lighting, bad streets, grass that's this tall...a lot of the houses are boarded up. And it's like that all around this institution."

"Part of my responsibility is to get our institution to understand that the community right outside our front door is as important as any community we're [already] serving and maybe more so," said Mercier.

Mercier and the MCG Foundation are together one of the three groups involved in the HUB Augusta Collaborative that got the ground turning soon after Augusta National Chairman Fred Ridley announced in 2020 that the golf club and its corporate partners would be investing $10 million into the project.

Expanding beyond the Laney-Walker area to Augusta as a whole, the federal poverty rate is 23% or slightly higher than the state as a whole, but more than twice the U.S. average of 11.6%.

Chanticleer resident Eddie Hipp said he was worried about the pile-up of cars waiting to turn onto Martintown, saying this is already a problem and one that will only grow if another 127 homes are added to the neighborhood with no new access point.

A North Augusta neighborhood, three decades old and backing onto wetlands, looks likely to more than triple in size now that the city's planning commission recommended that council approve a preliminary plat for the proposed Wrenfield at Chanticleer.

And people are not happy.

About four dozen people were in the third floor gallery at the Municipal Building Wednesday night, Sept. 21, and prior to their vote commissioners heard more than 40 minutes of public comment that ranged from the mild and concerned to the accusatory and sarcastic.

"Let's be frank with each other. It's houses versus an ecosystem. Who usually wins" said one resident while another opened her comments with feigned delight over soon receiving a retention pond on her property.

The existing Chanticleer neighborhood of 57 homes would expand to 184 households if North Augusta's elected officials agree with the planning commission's recommendation.

There would be just one access point, that which already opens onto Martintown Road from the existing neighborhood and which would require those 127 new households to pass through the one neighborhood in order to get to the other.

The new development would also be North Augusta's only conservation subdivision, a special designation that allows the developer more latitude in order to work around topographical challenges.

Commissioners had last month, on Aug. 17, tabled their decision on the Wrenfield project after rescinding that same evening a 2-2 vote that would have killed the project of 127 single-family homes.

This week, the advisory board — again just a contingent of four — stood as one to unanimously recommend approval by the city council.

"I've not run into a developer that has made these kinds of concessions," said commission Vice Chair Tim Key, who said the developer was utilizing every inch of the property he could while still preserving wetlands.

Commissioner Bob Bigger, who last month had been on the side of denying the project, said this week that he could find no reason not to recommend approval of the project given that it falls within the city's development code.

Commissioner Rett Harbeson again recused himself due to his professional connection with the project's architect. Commissioner Len Carter was absent this week; and commissioner JoAnn McKie has recently resigned, citing a desire for more time with family.

After the vote, the gallery erupted into a series of "nays"; one woman shouted "Our voice counts, too — and and it wasn't heard!"

During the public comment period, which by the rules of the commission wasn't strictly required, traffic and environmental concerns were top of the list for resident complaint.

Chanticleer resident Eddie Hipp brought evidence for commissioners of the already problematic exit from Chanticleer onto Martintown Road and said he worried that a pile-up of even more vehicles might block his driveway, one of the first in the neighborhood.

Leaving the neighborhood is already "between difficult and impossible," he said. "It's bad now, and with 127 additional homes, it's just going to get worse."

One woman was upset enough to call the traffic engineer on the project an "idiot" and then shout at commission Chair Crawford before quoting the line in "Big Yellow Taxi" that "they paved paradise and put up a parking lot."

The Chanticleer development, though, wasn't ever intended to be just the 57 homes that stand there now.

The property behind the existing neighborhood, the property that was considered Wednesday night and which would become Wrenfield at Chanticleer, was annexed into North Augusta in 1991 and has been zoned for single-family residential all this time.

Maria Ditty, daughter of the developer who had put up the existing Chanticleer neighborhood, was present Wednesday. Had she or her sister gone into the business of development after their father passed, she said, the homes would already be there. "The whole entire area was zoned for single-family homes," she said.

This isn't the first time in recent memory that the 67 acres behind Chanticleer has come to the planning commission.

The project first came before commissioners last October for a sketch plan review — the first step in a formal project proposal and one meant to gage interest among both city officials and the public. The proposal at the time was known as Big Pine Subdivision and had flown under the radar, receiving little public input.

In the year since, project engineers and the developer have worked through a stormwater management plan and traffic study, conducted in March this year, so as to make the project work in an area challenged by its topography.

An additional access to the new Chanticleer neighborhood was at one point considered for the south end of the development, connecting to Shawnee Drive, but this was later deemed infeasible due to the creek there and the steep grade of the land.

"We don't want to add to this issue," said Dan Holloway, a representative with developer Merit Commercial Holdings (MCH). Holloway said that it's his intention to leave the streams untouched and to preserve what can be preserved.

"We are cutting trees down, we are adding traffic," he said. "But we are trying to be cognizant [of conservation]."

Former commissioner JoAnn McKie, who resigned between last month's session and Wednesday's, has iterated time and time again that much of the property now coming up for development is going to have wetlands associated with it.