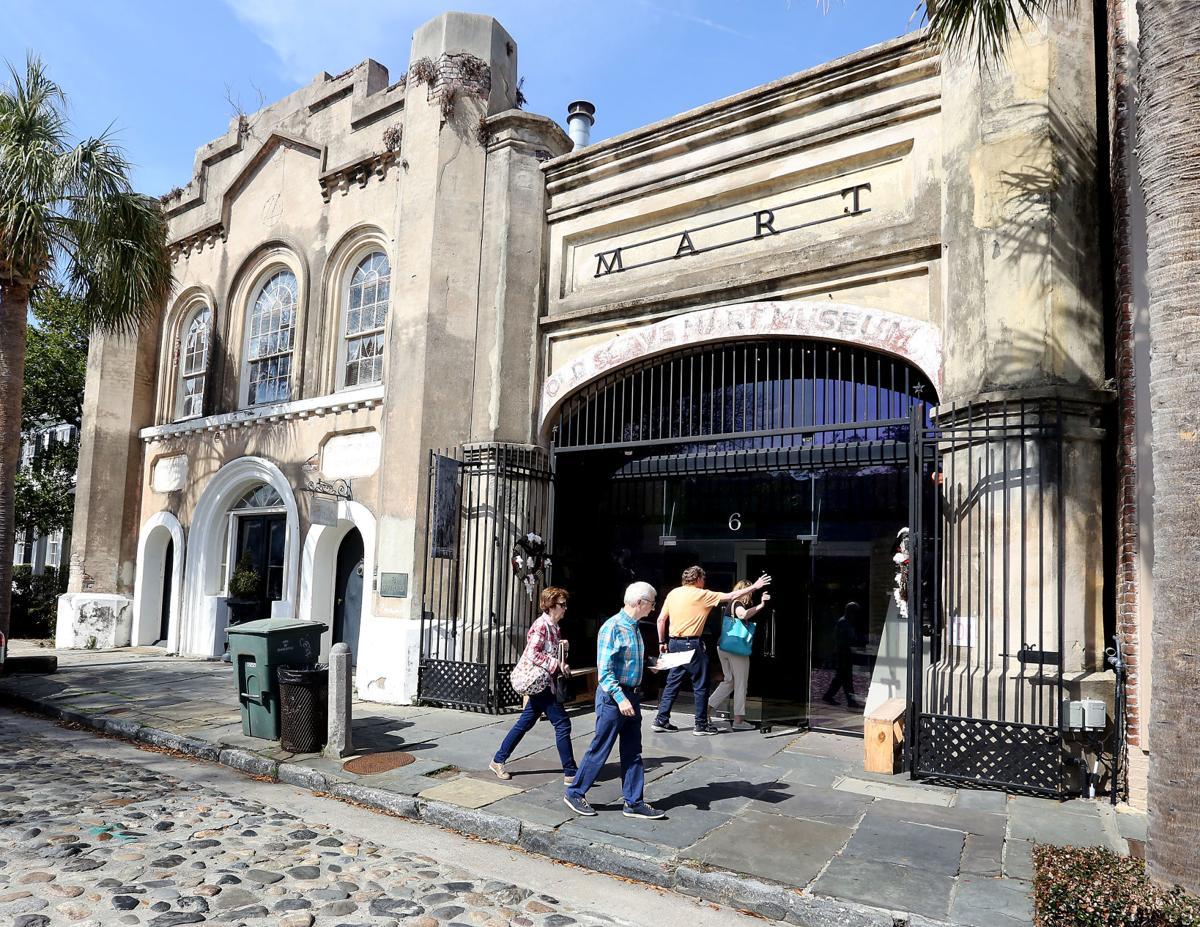 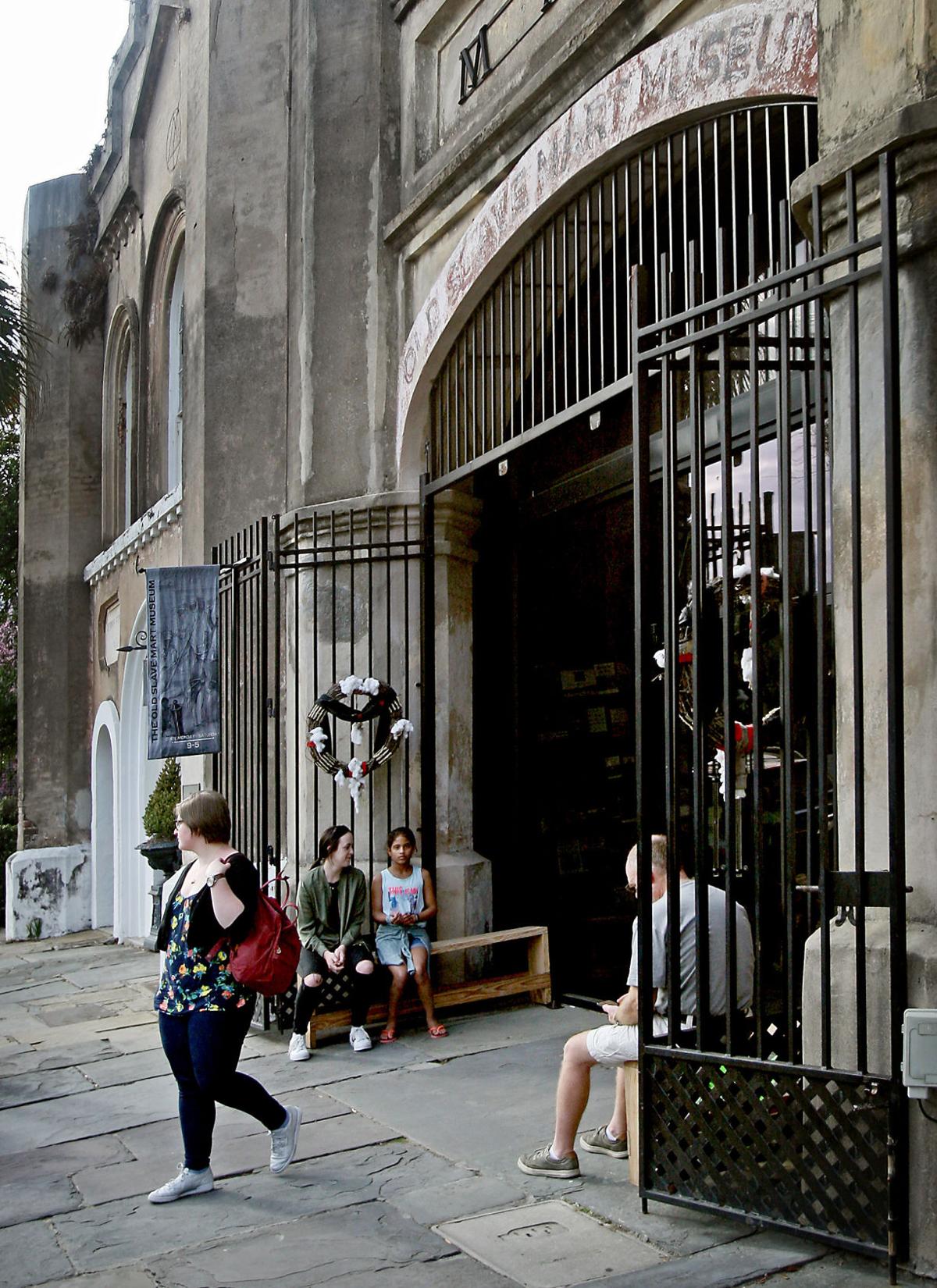 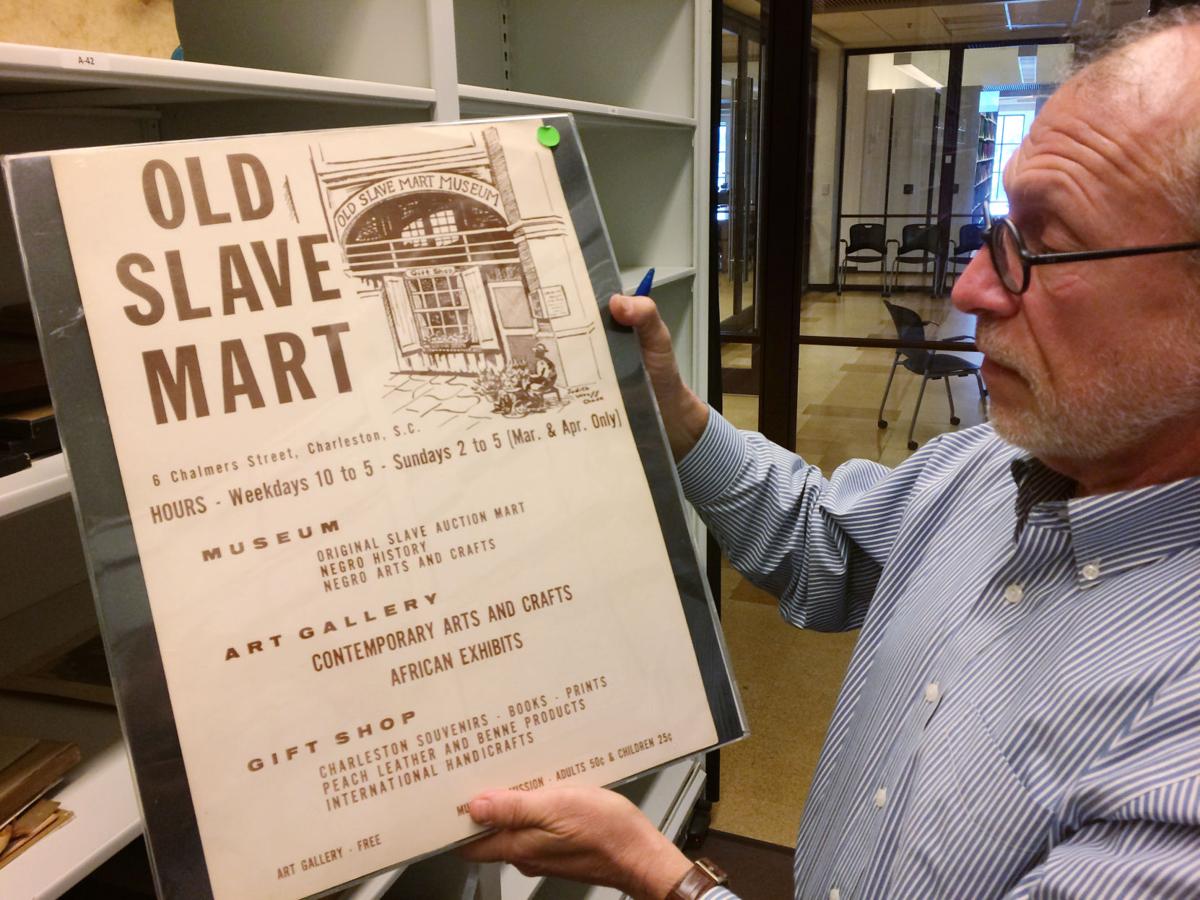 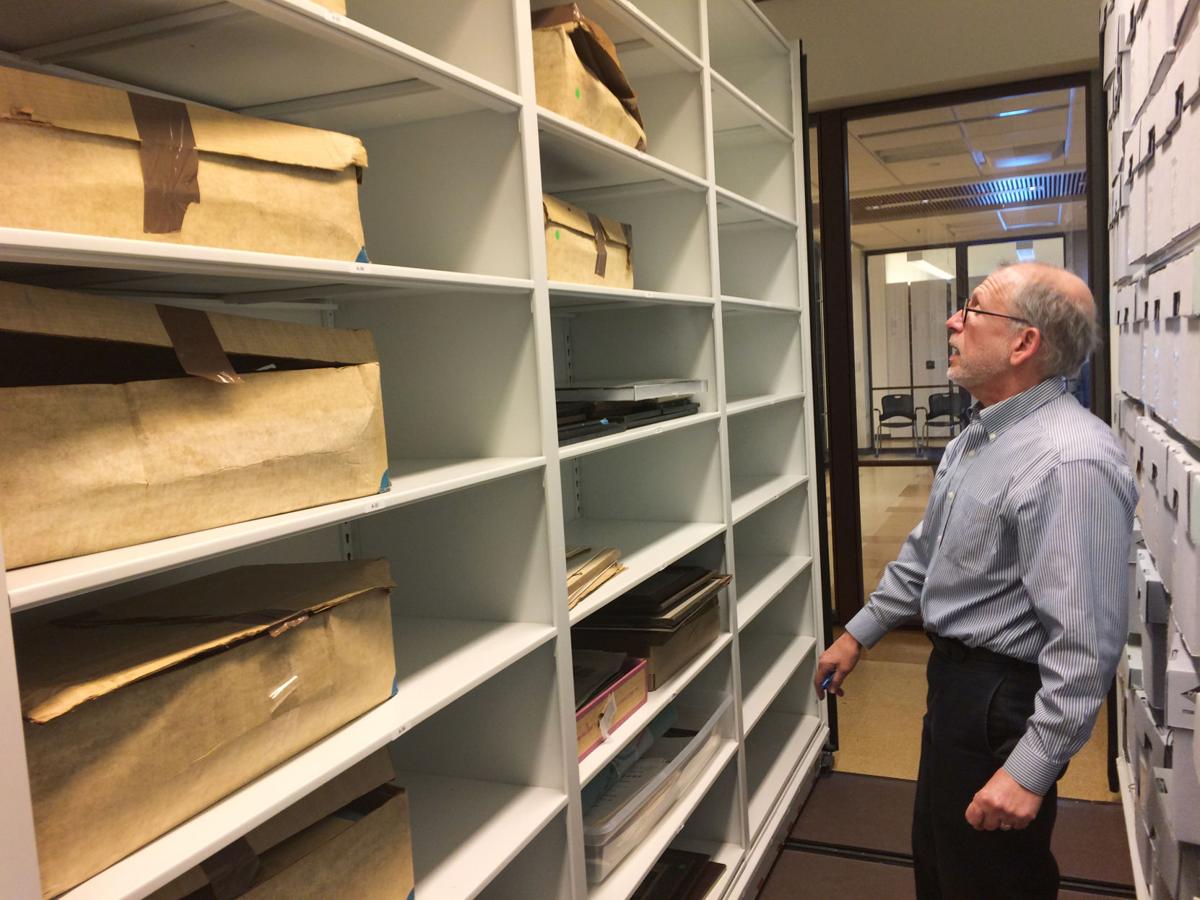 Harlan Greene of the College of Charleston's Addlestone Library looks over some of the 47 boxes of Old Slave Mart Museum papers the college recently bought at auction. Robert Behre/Staff 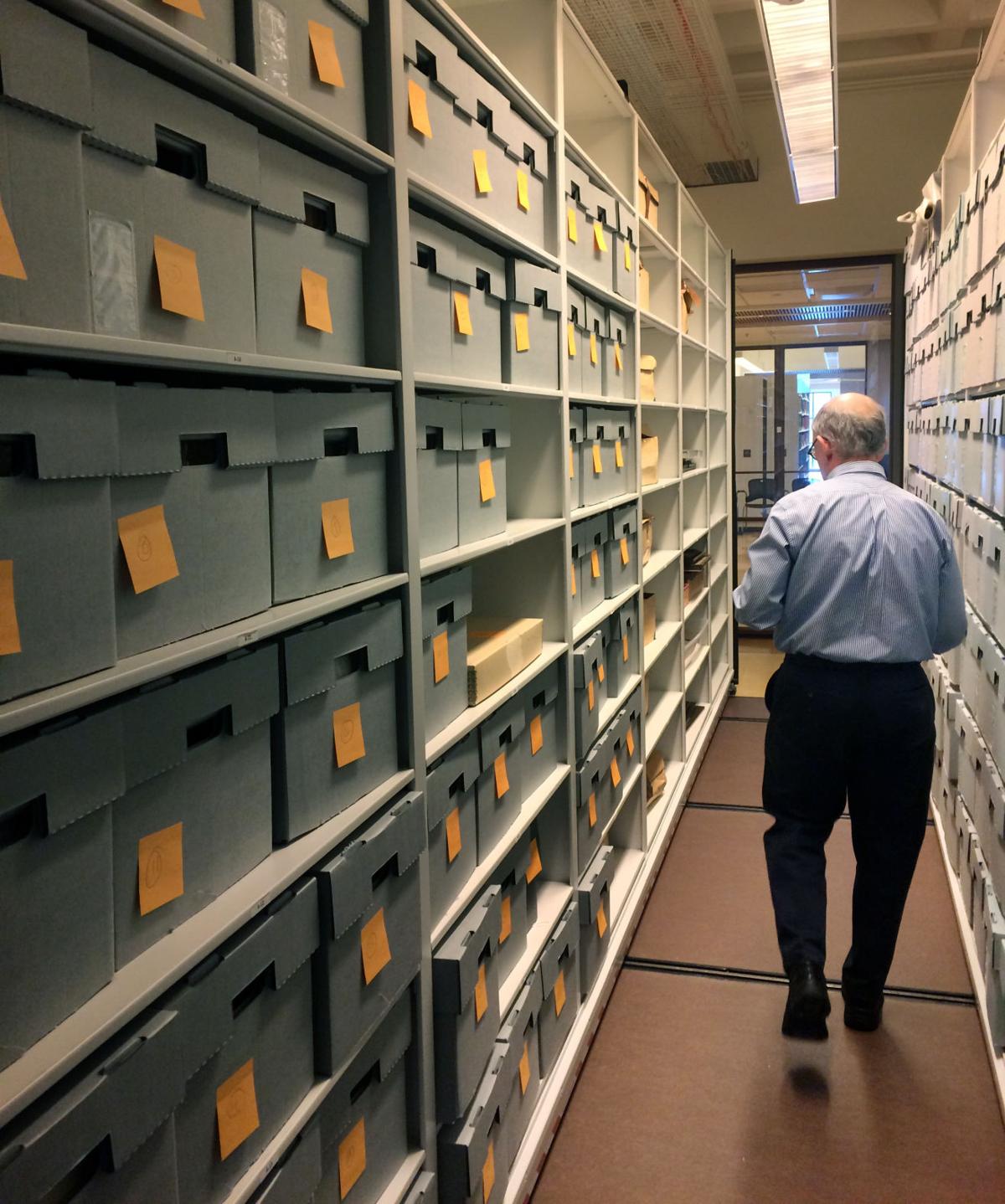 The College of Charleston has not organized the Old Slave Mart Museum papers it recently bought. Once it does, it might keep only a faction of the material in the 47 boxes (left). Robert Behre/Staff

Harlan Greene of the College of Charleston's Addlestone Library looks over some of the 47 boxes of Old Slave Mart Museum papers the college recently bought at auction. Robert Behre/Staff

The College of Charleston has not organized the Old Slave Mart Museum papers it recently bought. Once it does, it might keep only a faction of the material in the 47 boxes (left). Robert Behre/Staff

When Charleston's Old Slave Mart Museum opened its doors on Feb. 21, 1938, the privately run tourist attraction was a ball of contradictions.

Founded by an Ohio transplant, the site made many white Charlestonians uncomfortable by putting a part of its slave history on public view, but the institution also sold Colonial Belle Goodies and didn't stray far from the moonlight and magnolias messaging of the era.

Miriam B. Wilson, whose father was a decorated Union veteran, purchased the modest structure at 6 Chalmers St. because it was a surviving example of a mart where slaves were sold domestically before the Civil War.

She ran the museum until her death in 1959, after which two Charleston sisters, Louise Alston Graces and Judith Wragg Chase, stepped in to preserve it and keep it open. They closed it in 1987, after which the city bought the building — but not its collection, which largely left town.

The current version of the Old Slave Mart Museum, which the city opened in 2008, bears little resemblance to its forerunners, aside from the walls surrounding it.

And it will continue to evolve: The College of Charleston recently acquired dozens of boxes of papers from the museum's formative years, papers that will help historians understand the mart's unique role as one of the nation's first and only museums to interpret slavery.

Ethan Kytle and his wife Blaine Roberts are history professors at California State University-Fresno. Both also previously taught and studied in Charleston, where they were inspired to tackle their new history "Denmark Vesey's Garden," an account of how Charleston remembered slavery after it ended.

During their research, they got access to the papers behind the Old Slave Mart Museum's original incarnation. When they learned these papers — and other Old Slave Mart artifacts held by the late Carroll Greene Jr., founder of The Acacia Collection — were going up for auction last fall, they tipped off a friend.

That friend was Harlan Greene, a historian and author who also handles special collections at the College of Charleston's Addlestone Library. He laid plans to scrape together money to try to bring them home.

"We really did see it as our patrimony," he said. "I was dealing with the owner, and the auction company for months before it went to auction."

The College of Charleston was able to scrape together $5,400 to place the winning bid for the 47 boxes, more than 50 linear feet, of material.

Most other artifacts went elsewhere, though the college's Avery Institute successfully bid $1,320 on a portrait of Ellen Craft, a light-skinned Georgia slave who successfully bluffed herself to freedom by claiming that her husband was actually her slave who was accompanying her on her trip north.

Greene said the collection of papers has few objects and probably no trophies, "but if I wanted to study the creation of the museum or the running of it, the papers are vital.

"Certainly, there is going to be racist stuff in there, too, but we couldn't let it get away," Greene added. "It's too important to understand the psychology of the city."

The Old Slave Mart Museum is like many of Charleston's most visited sites in that it has many layers of history.

For instance, the Joseph Manigault House museum at John and Meeting streets speaks of the wealth and taste of one of the Lowcountry's most prominent planter families, but it also tells of the birth of the city's preservation movement in the early 20th century, when influential women and men in the city rallied to save it.

The Old Slave Mart has its original story as a place where slaves were held and auctioned off, but then there's a later story about how it presented an uncomfortable part of Charleston's history before blacks and whites had equal civil rights.

That's the history that has recently received new attention.

Kytle said the museum's creation takes up a big portion of a chapter in the book "Denmark Vesey's Garden."

"You're looking at the memory of slavery in Charleston, and the Slave Mart is a pretty remarkable institution in its three manifestations," he said. "It’s also remarkable in the earlier story of the United States. It was the first museum that focused on slavery in America, and for most of the 20th century, it was the only one. It’s unique in that way."

And Wilson emerges as a complicated figure. "She was proud of her anti-slavery heritage," Roberts said. "Her father was a defender of the Union. Her paternal grandfather was very much in the anti-slavery camp and moved from Virginia because of his opposition to slavery. She remembers how 'Uncle Tom's Cabin' had a strong influence on her."

She had her critics — some even accused her of visiting a butcher shop to procure blood to smear on the museum's floor and pretend it was from slaves. But today, through the lens of history, her critics might come from a completely different side.

"The story she told about slavery was basically right out of the white Southern playbook," Kytle said. "She whitewashed slavery and bought in entirely to the Lost Cause denials that were all around her in Charleston." In other words, her view of slavery often glossed over its horrors, such as beatings and separating families.

Historian Stephanie Yuhl, author of "The Golden Haze of Memory: The Making of Historic Charleston," also has leafed through the museum's papers and agreed the Old Slave Mart Museum "is really important as one of the first places that attempted to historicize the American slave trade."

While Wilson was no racial progressive per se, Yuhl said, "you can’t have a paternalist narrative of slavery if you start the story in a cage where slaves were being inspected for sale.”

Greene agreed. "Looking at her today, we would say she was paternalistic, but she did try to put slavery on the map."

A visit to the Old Slave Mart Museum today reveals a very different place than when it was in private hands.

When the city reopened it in 2008, its exhibits focused on the history of Ryan's Mart itself, then used the building as a springboard to get at the larger history of the domestic slave trade.

On Thursday morning, the museum was packed. About 64,000 people visited it last year, up about 10 percent from 2016, said Operations Director Ista Clarke. Its visitation is on par with the city-run Old Exchange Building.

"This is a destination for people," Clarke said. "They come from all parts of the United States and abroad."

Edwin Breeden, who directs research and interpretation at both the Old Exchange Building and the Old Slave Mart Museum, said he was "thrilled and extremely grateful" to learn the college had acquired the slave mart papers.

And it's clear some of these papers will influence future displays.

"We already managed to find several really great images and documents that we're planning to incorporate into some of our new displays at the museum," he said. One example is an image of a historic plaque that once was placed on the "barracoon," the jail where slaves were kept before their sale. The four-story brick building on Queen Street was razed around 1950.

The city is at the early stages of planning for a more focused, site-based interpretation of the history of Ryan’s Mart, he said.

Part of the change will extend the site’s story into the 20th century, he said, including its rebirth as one of the nation’s first museums dedicated to the interpretation of African-American history.

Ethan Kytle and Blain Roberts, authors of "Denmark Vesey's Garden," will give two talks here next month. Both will begin at 6 p.m. and are free and open to the public: