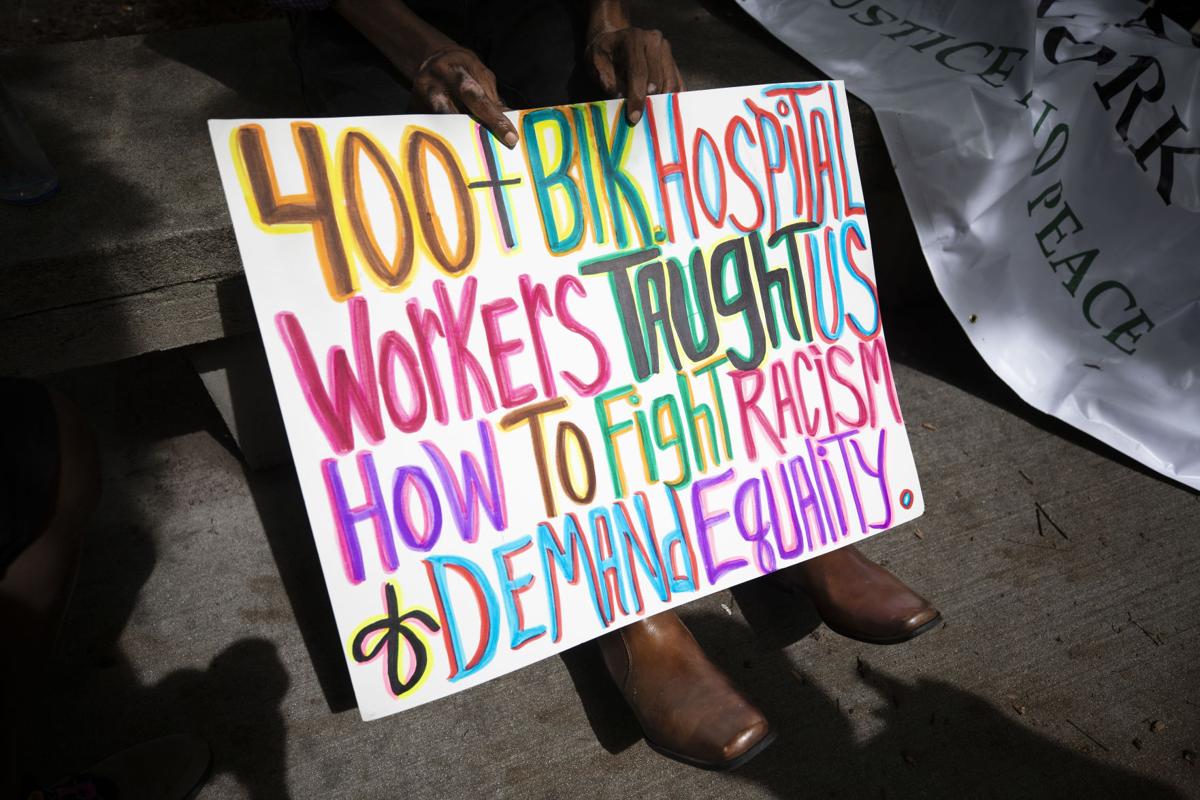 Jerome Smalls holds a sign during an event to commemorate the 50th anniversary of the Charleston hospital workers' strike on Saturday, April 13, 2019. Lauren Petracca/Staff 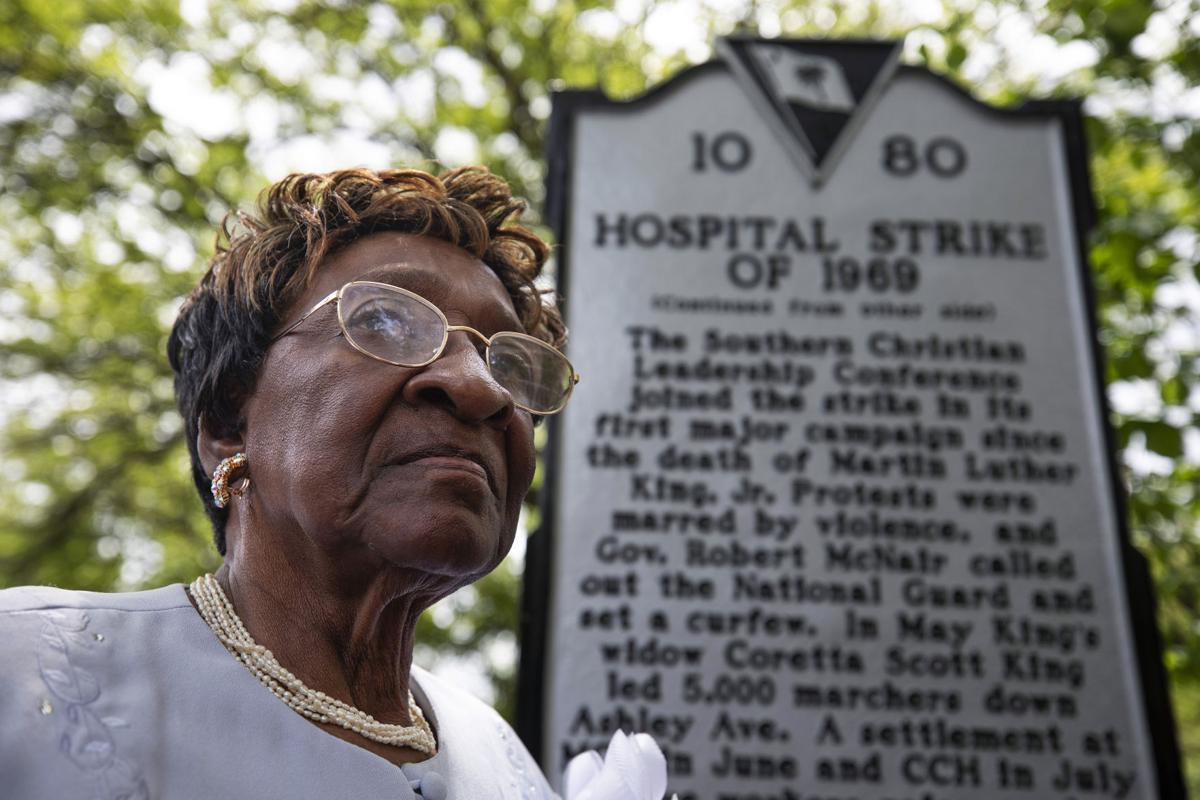 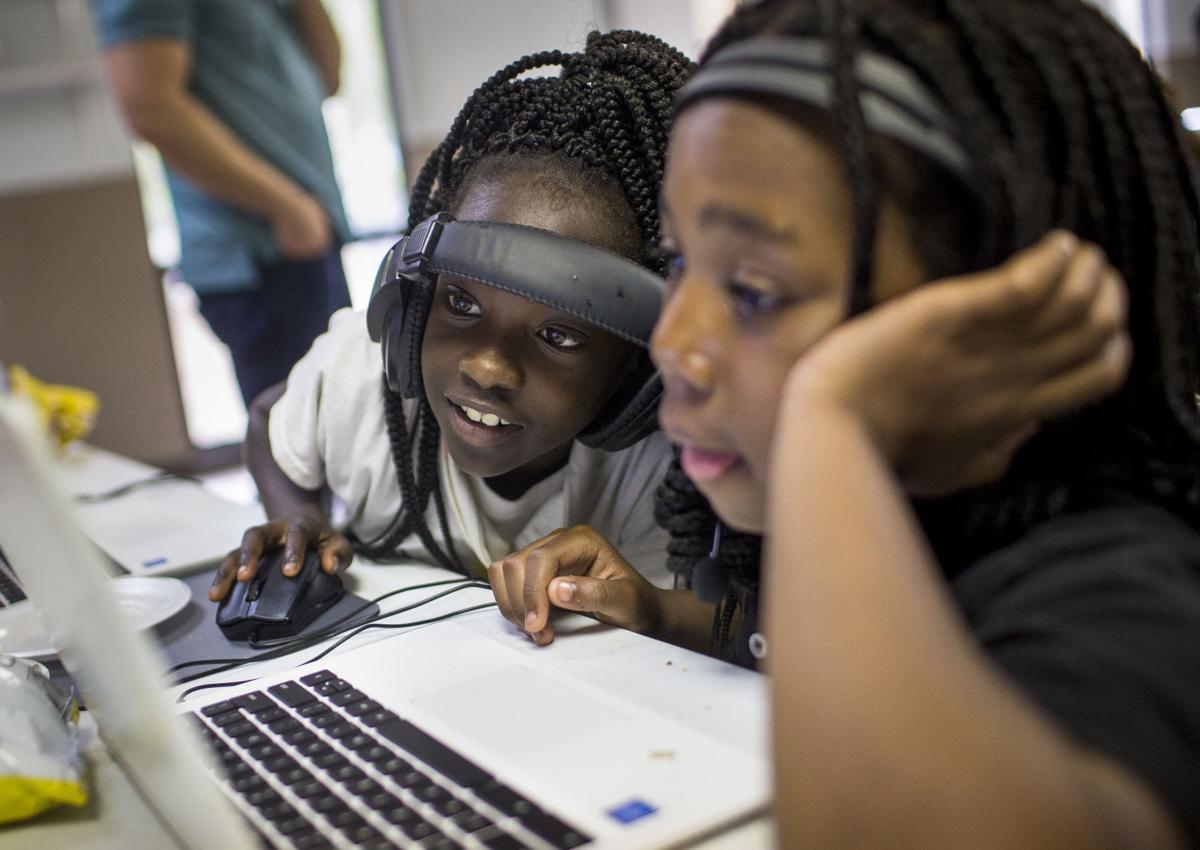 Heaven Polite, 7 (left), looks over to the screen of Savannah Haynes, 10, during a CodeON workshop put on by Charleston Women in Tech on April 17 at the Freddie Whaley Community Center in Charleston. File/Andrew J. Whitaker/Staff

Jerome Smalls holds a sign during an event to commemorate the 50th anniversary of the Charleston hospital workers' strike on Saturday, April 13, 2019. Lauren Petracca/Staff

African American hospital workers in Charleston made history 50 years ago by fighting for workplace and wage equality.

Half a century later, that fight is far from over, and data show that the problems may have gotten worse.

A report from the College of Charleston's Race and Social Justice Initiative found that the "economic gulf" that existed between black and white residents in Charleston County at the time of their protest has not disappeared and is, in some ways, even wider today.

Racial disparities also persist in the job market. While unemployment rates have recently reached historic lows in South Carolina, African Americans in the state experience unemployment at a rate twice that of white workers.

Daron Lee Calhoun, outreach coordinator for the college's initiative, was one of the contributors to the disparities report and has worked closely with the original strikers this year as the city has remembered their work.

"They give me hope, but it also hurts a little to see them still fighting, because they should be resting now," Calhoun said. "We shouldn't be going through the same things 50 years later."

'Daunting but not insurmountable'

The State of Racial Disparities in Charleston County

This report, published by the College of Charleston's Race and Social Justice Initiative in 2017, outlined racial disparities in the county, i…

The college's State of Racial Disparities report collated and contextualized data from 2000 through 2015 to break down findings on wages and poverty, barriers to affordable housing, educational attainment, health and environmental hazards and crime and policing.

In Charleston, which Calhoun said is like a "micro study of what's going on in America," all of these issues are interconnected.

"You cannot separate any of these issues from the others," Calhoun said.

The report's introduction explained its purpose: to identify and analyze inequities as a first step in eradicating them. The findings assembled were "daunting but not insurmountable," the report said.

Measures of household income, which were taken from Census Bureau data and the American Community Survey, showed economic gaps that are "as wide or wider" today than they were in the 1960s and 1970s.

The report references a National Urban League study that showed black families in the Charleston area had a median income of just under $30,000 — less than half the median income of white families in the region. The same findings showed significant earnings gaps in Nashville, Columbia, Atlanta and Raleigh, but Charleston's income gulf was the widest of those metro areas.

Calhoun said he's seen the city utilize the report since it was released in late-2017 and hopes the new leader of the city's office of Diversity, Racial Reconciliation and Tolerance will adopt some of the data-based approach.

One year after Charleston apologized for slavery, a broader conversation has begun

"We knew there were these disparities. We knew gentrification was happening," Calhoun said. "But no one had laid out the data in that way."

The college is also working to create similar reports, he said, for Berkeley and Dorchester counties. And after new census data is measured nationwide in 2020, the college will have an opportunity to look at these numbers again and determine whether progress was made in the past five years.

The report laid out three "necessary ingredients" for bridging the county's earnings divide: a commitment to lowering the poverty rate, an effort to fight discrimination in the labor market and strong job growth within black communities.

Though recent jobless rates across the U.S. have been historically low, the gaps between white and black unemployment rates have persisted. In May, the unemployment rate for black Americans was 6.2 percent, compared with 3.6 percent for all adults.

In South Carolina, the unemployment rate held at a historic low of 3.2 percent from last September through March, but figures differed based on race.

According to an analysis by the Economic Policy Institute of employment statistics and population data, the unemployment rate for white workers in South Carolina during the first quarter of this year was less than the statewide average, about 2.4 percent. The jobless rate for black residents was about double that at 5 percent.

That's reflective of figures seen across the country, said Valerie Wilson, the director of the Economic Policy Institute's Program on Race, Ethnicity, and the Economy. Black workers had unemployment rates at least twice that of white workers in 16 states and the District of Columbia during the first quarter of 2019.

Among those states, however, South Carolina has one of the lowest African American unemployment rates, just behind Tennessee, and the rate is well below its pre-recession level.

Wilson said the 2-to-1 ratio seen in black-white unemployment figures has been "incredibly consistent" over time. The disparity persists even when separating workers by education level, such as comparing the jobless rates among black and white college graduates.

"That, to me, is strong evidence that racial discrimination exists in the labor market," Wilson said.

One area that may provide some opportunities to shrink these economic and employment gaps is Charleston's growing tech sector, said Djuanna Brockington, the women and girls empowerment coordinator at the Greater Charleston YWCA, a group that fights to "eliminate racism and empower women."

"It's growing, wages are high," she said, "but we can do a better job of bringing people from this area, and minorities, into those opportunities."

In her role, Brockington provides resources and workshops for women in the Charleston area, particularly women of color who are at the beginning of their careers or at a transitional point in their professional lives.

The YWCA also facilitates coding clubs for girls as young as third grade. The "Y Girls Code" groups were launched in 2016 and are now in six schools across the area.

Those programs, along with resources like SC Codes, a free online resource from the S.C. Department of Commerce that went live in the fall, are critical to bringing local, diverse talent into the area's tech industry, Brockington said.

Beyond the tech sector specifically, Brockington said that transparency about wages across all jobs and industries can help achieve more equal pay for women and minorities. Policies like not asking prospective employees about their pay history and publicly posting salary ranges for open positions hold employers more accountable, she said.

"Secrecy allows people to come in at different rates," Brockington said, "and that often hurts women and minorities the most."

Through the eyes of the Charleston hospital workers movement: 50 years later