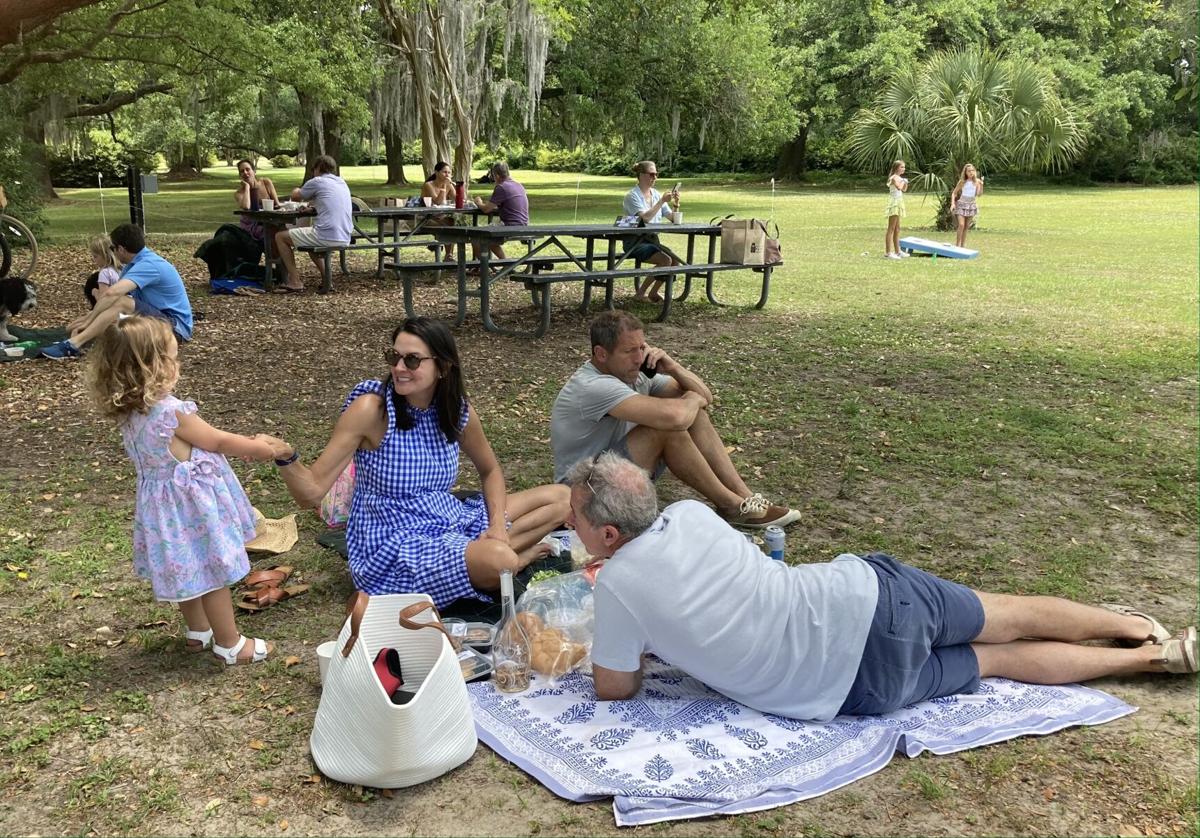 Patrons of Charleston Parks Conservancy's Picnic in the Parks fundraiser enjoyed a family-friendly outing in Hampton Park on May 22. Maura Hogan/Staff 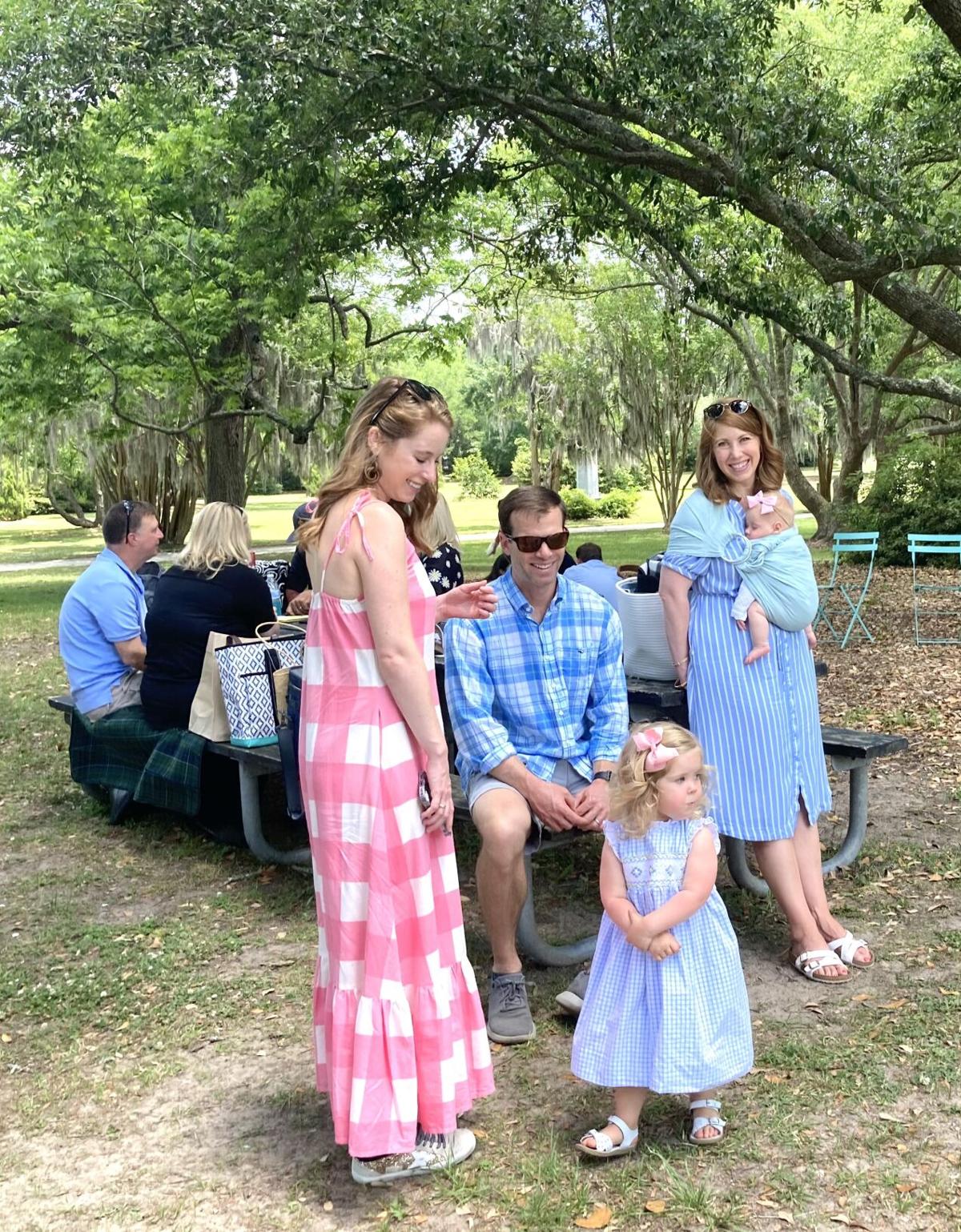 Patrons gathered in Hampton Park on May 22 to enjoy chef-made picnic fare during the Charleston Parks Conservancy's Picnic in the Parks event. Maura Hogan/Staff 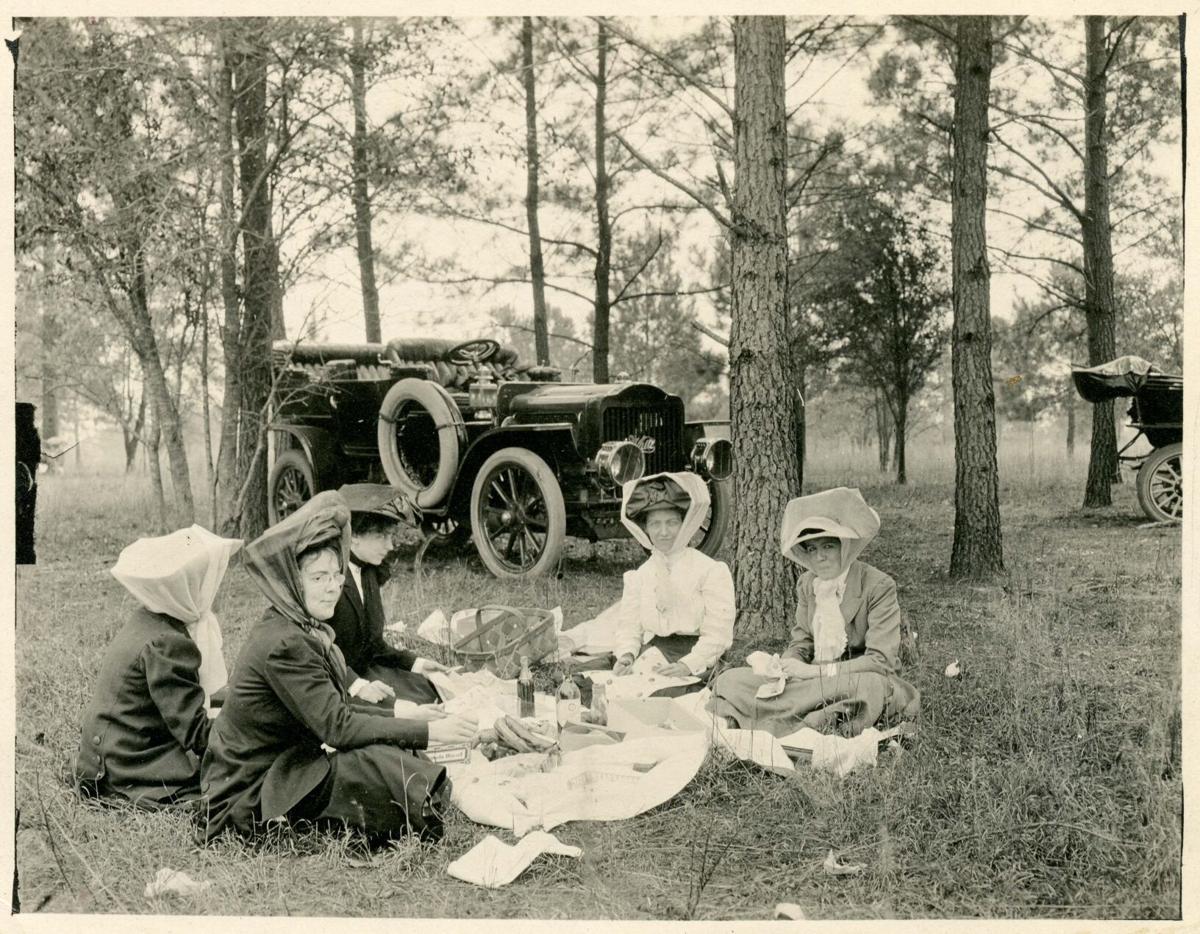 In the early 20th century, well-to-do South Carolinians who were members of the Auto Club would motor to picturesque settings to picnic. Charleston Museum/Provided 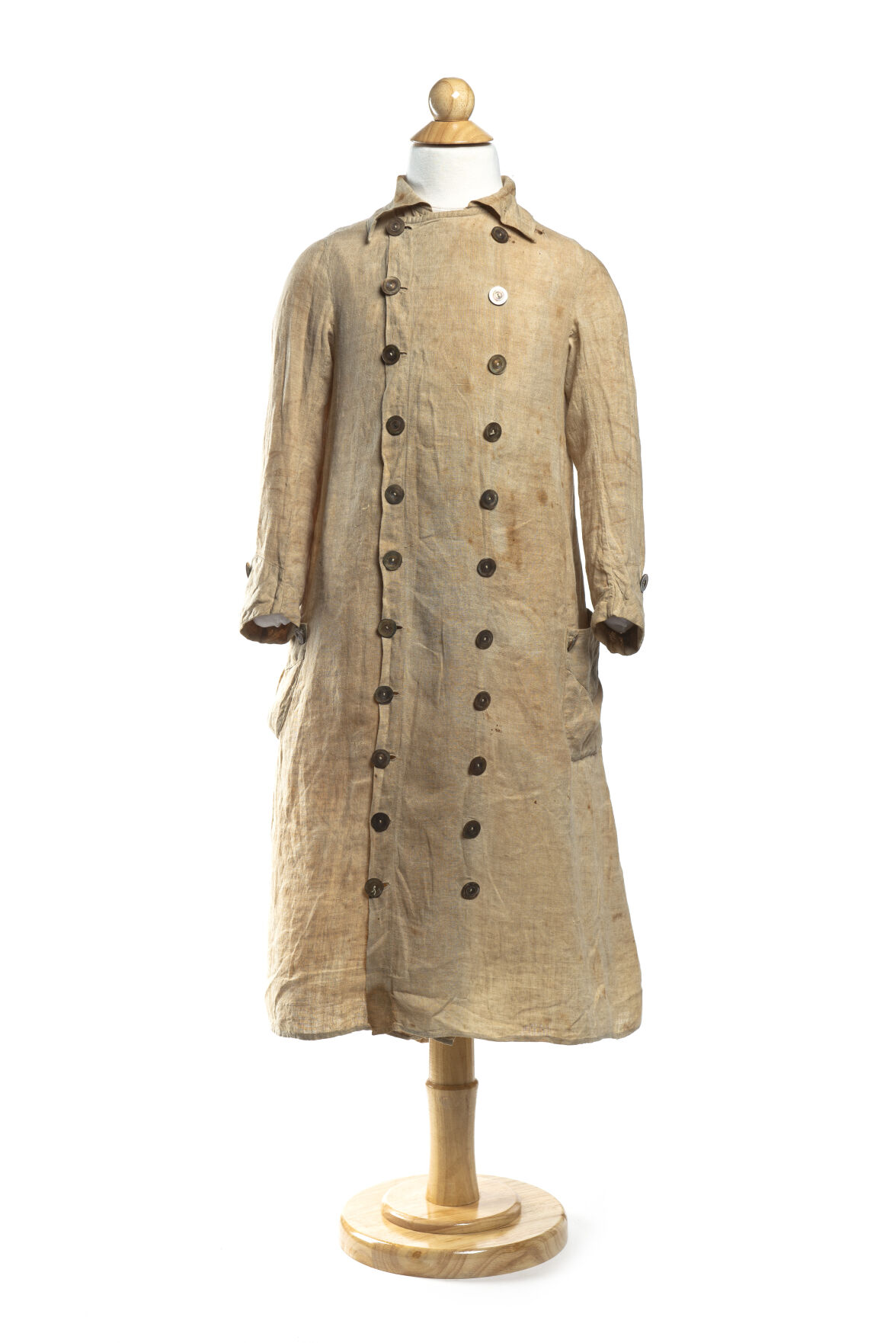 A duster jacket worn by Charleston Renaissance artist Anna Heyward Taylor as a child, when her family would motor to picnics around South Carolina. Charleston Museum/Provided 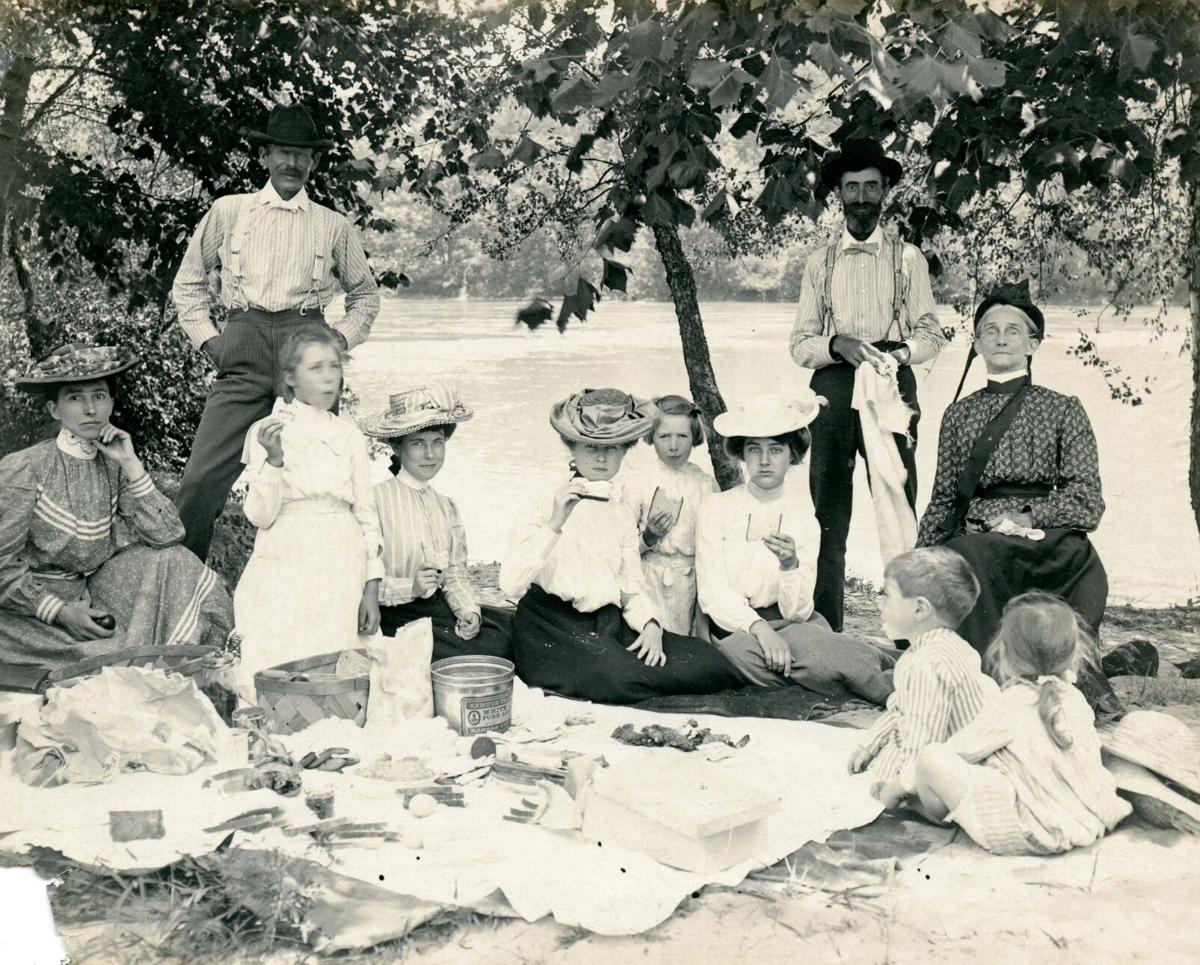 A picnic on the French Broad River in North Carolina demonstrates the perennial appeal of outdoors gatherings in earlier days. Charleston Museum/Provided 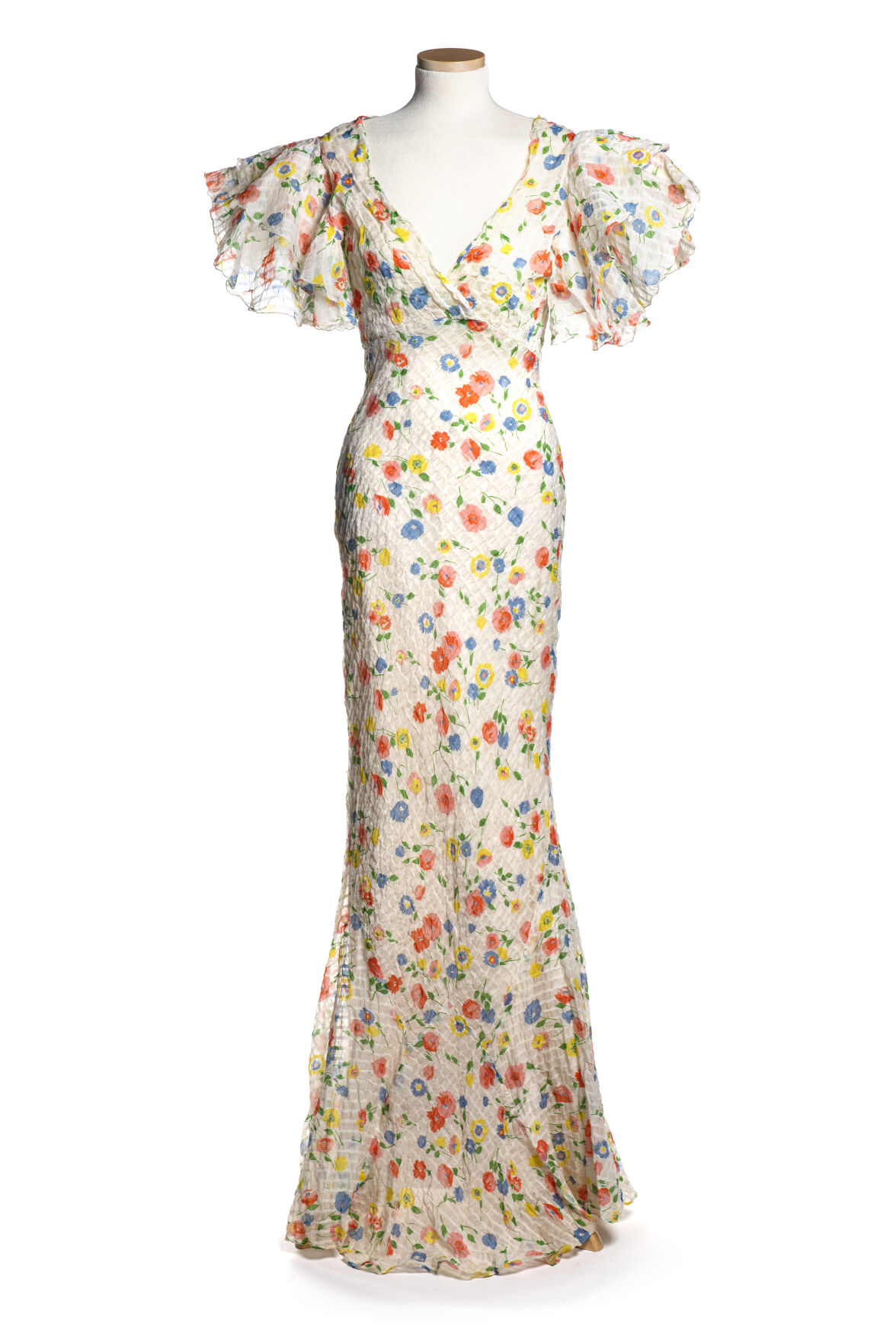 On a recent, picture-perfect Saturday in May, a few dozen cheery, chill families and friends idled at Hampton Park. Spreading out smart tartan blankets, they sampled the likes of fried chicken, succotash salad and bread pudding plucked from fresh, pre-packed picnic bags they had collected at the nearby Rose Pavilion.

Toddlers in smocked dresses trundled about, with mothers in bright gingham prints blithely keeping watch. A pair of the park's denizen ducks waddled by, de facto hosts surveying the gathering in their home.

The occasion was Picnic in the Parks, Charleston Parks Conservancy's pandemic-conceived fundraiser centered on coming together to indulge in high-end baskets full of chef-created fare.

This year more than ever, the pull of a picnic is a no-brainer. It's ideal for those tentative about rubbing shoulders in the great indoors. It's the cure for anyone still in the throes of spring fever. It's catnip for enthusiasts of alfresco meals brimming with finger-friendly local delights.

Picnics from the past

While open-air pursuits seem particularly suited for the here and now, the appeal of such grassy gatherings is by no means a new notion in Charleston.

As much a part of the city's social fabric as a bright, ground-level blanket, picnics have been a stalwart social setting in Charleston for centuries.

According to Nic Butler, historian at Charleston County Public Library, the word for the city’s local picnic traditions was originally "maroon," derived from the French term "marronage," as well as the earlier Spanish-Caribbean term "cimarron." In 18th-century English, a "maroon town" was the term for a camp set up by enslaved runaways.

“By the early 1800s, however, the term also took on the meaning of a getaway or excursion, as in ‘pack your maroon bags for a weekend trip,’” he said.

Following the rise of steam-powered ferries, the 1830s found White Charleston residents embarking on their own "maroons" of social recreation on a nearby island or beach.

“The newspapers of mid 19th century Charleston are filled with springtime advertisements in which social groups, like militias, societies, clubs and churches, would hire a steamboat and a band for a day-long maroon to an island, where they would fish, dance, feast, shoot at targets, and so on,” he said. The term "picnic" occasionally appeared as part of those activities.

According to Butler, by the late-1860s, formerly enslaved people (and free persons of color) were advertising their own maroons in the local newspapers, and post-war outings also often included baseball. Butler cites one prominent example from DuBose Heyward's 1925 novel, "Porgy," which features a maroon excursion to fictional Kittiwah Island. In the 1900s, early automobile enthusiasts were also known to motor the countryside for such outings.

Another popular spot for 19th-century picnics was Magnolia Cemetery, where picnickers availed of their family plot, socializing with other families grouped at their own plots. The late Ted Ashton Phillips Jr., author of “City of the Silent: The Charlestonians of Magnolia Cemetery,” was known to reference the Sunday excursions when giving Magnolia tours of the cemetery's storied habitués.

Plan a summer of leisurely reading with these SC-connected books

When the Charleston Parks Conservancy was forced to forego its annual fall Party in the Parks fundraiser last year, its leaders instead hatched a mid-pandemic measure. Enlisting the help of restaurants to fill picnic baskets, the conservancy offered them up for purchase, encouraging recipients to enjoy them on their patios or in Charleston’s parks.

“That was our answer to having to cancel Party for the Parks and still have a fundraiser without getting people together,” said Austin Nelson, a former Charleston Parks Conservancy staff member who now works on contract as the organization’s park events coordinator.

You could say the concept hit it out of the park.

“People really loved it,” she said.

On May 22, they brought the picnic baskets back, this time adding an in-person locale at Hampton Park near the Rose Pavilion.

Guests were offered baskets with two menu options, filled by either Harvest Catering or Magnolia’s Restaurant (with the Conservancy paying restaurants for all food), wine and a covetable blanket donated by First National Bank. They could imbibe in the otherwise alcohol-free public space at a designated wine garden.

The picnic attracted a few dozen attendees, who nibbled, chatted, tossed frisbees, dallied with cornhole games or simply blissed out to musician Thomas Champagne's mellow selections, among them "Carolina on my Mind."

Team members said the manageable size worked well for the picnic, allowing the organization to safely test the new venture. The thought is to build the event for future years.

The event also served as an extension of a pandemic phenomenon of community members increasingly enjoying Charleston parks, Nelson noted. Many, particularly family members who found themselves homebound with distant learning, had been coming to the parks in droves.

“The parks became such a respite for so many people. … They knew they enjoyed parks, but I don't think they realized how instrumental they are in everyday life,” Nelson said.

Carolina Park: A Mount Pleasant master-planned community with a focus on family, community and nature

The Parks Conservancy is not the only organization focused on leafy reveries.

In May, Charleston Museum launched a new exhibition, “The Lawn Party: From Satin to Seersucker,” which runs through Sept. 19 in the Textile Gallery. The show shares many garments that would have been just the thing for a fashionable outing in decades past (as well as others more suited for starchier occasions.)

The exhibition follows the museum's fall offering, “Designers and Artisans in the Lowcountry." Charleston Museum Curator of Historic Textiles Virginia Theerman noted the fall show had more of an academic bent, examining makers and creators in the Lowcountry.

For the spring show, she veered toward a theme focusing on elegance and glamour, embracing an ethos of hope as the city began to emerge from the pandemic.

“I thought, ‘What’s better than party clothes?” she said.

Party withstanding, there is curatorial rigor stitched into those breezy folds. The show focuses on four fibers: silk, synthetics, linen and cotton. It also features some formal attire like evening dresses to exemplify the fabric.

“We examine each fiber and how it reacts to heat and humidity and what makes the garment appropriate for outdoor wear,” Theerman said.

One thing is clear: The pastoral idylls of yesteryear were far from the flip-flop fests of today.

Take for instance, the summer-light white cotton “lingerie” dresses from the early 1900s, so called for their likeness to the undergarments of the day. Prettily poised at the exhibit’s entrance, a soignée set welcomes museums patrons like a pair of fetching hostesses primed to usher them off to a Charleston garden.

Other period-specific sartorial wonders include the linen dusters. According to Theerman, they were once worn by members of the local Auto Club, who in the early 1900s motored to the countryside to set up picnics. Easy to launder and offering full coverage, the full-length coat protected clothing from road dust kicking up in open-top cars. The smaller one in the show was worn as a child by Charleston Renaissance artist Anna Heyward Taylor.

The trend may be taking off.

The Emeline Hotel currently offers a “Picnic Perfect” deal, with guests collecting a custom-made picnic basket from the hotel's restaurant, Frannie & The Fox, to carry them off either by the hotel's bicycles or a Mini Cooper.

But any local can dream up their own getaway. Nelson notes that the conservancy is involved with 25 parks in Charleston. Places from Morris Island to Edisto Beach State Park offer ideal settings for gatherings, too.

"The beauty of a park is that there is nothing political," observed Nelson. "If you can't love a park then what are you doing?"

Whether you opt for decked-out spreads or rougher-hewn retreats, anyone can find their sweet spot outdoors in the Lowcountry. All it takes is a cooler and a calling.