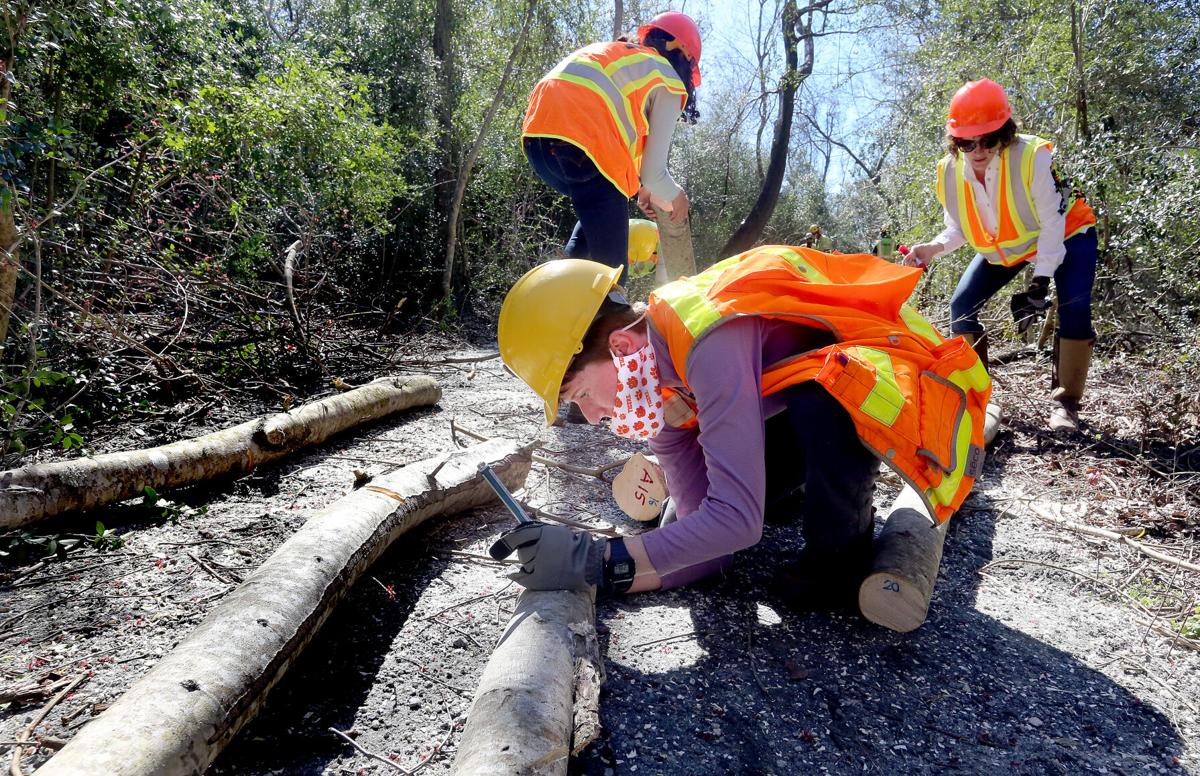 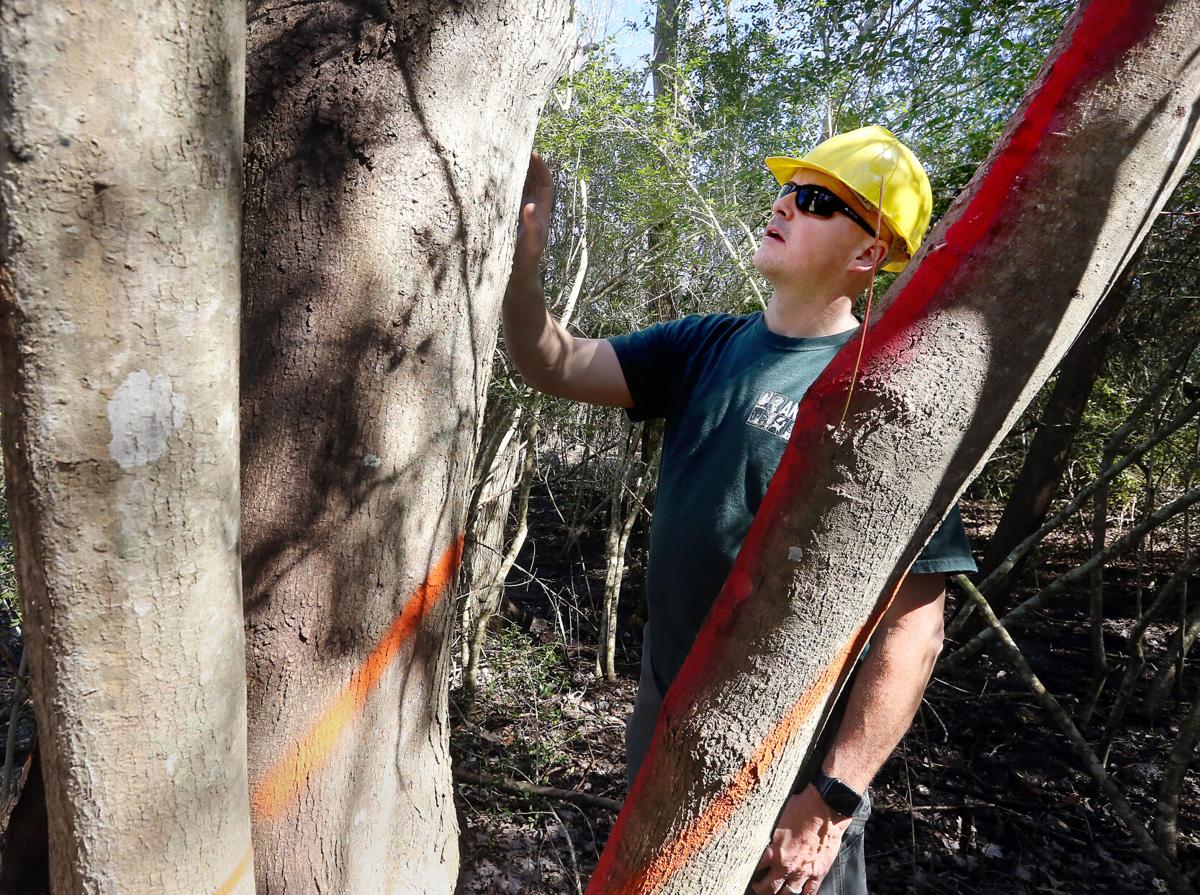 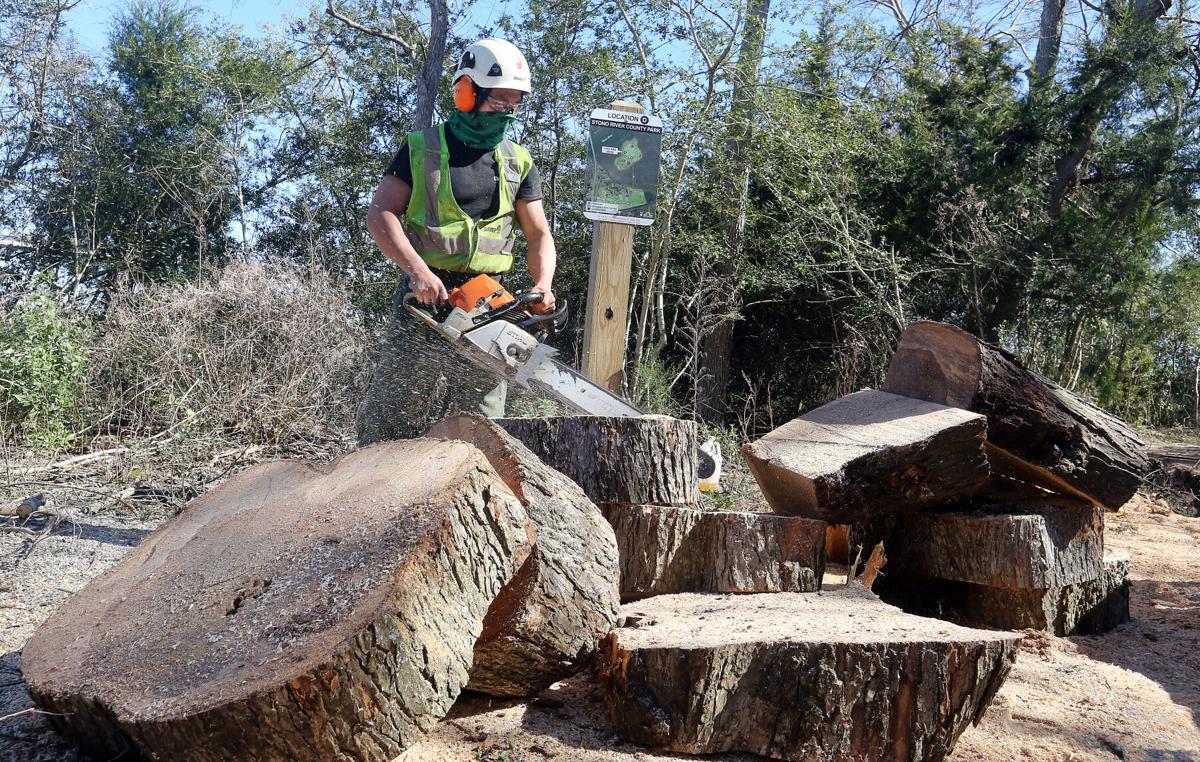 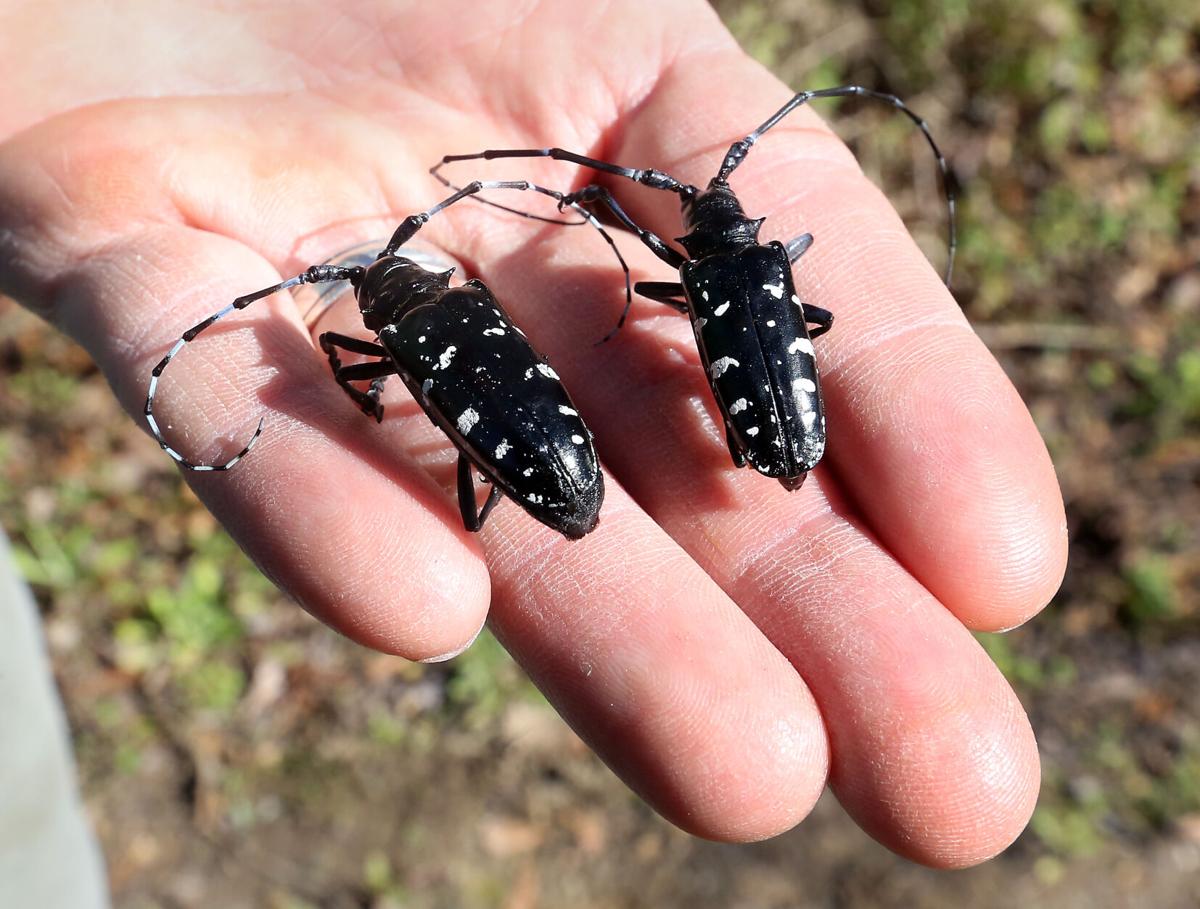 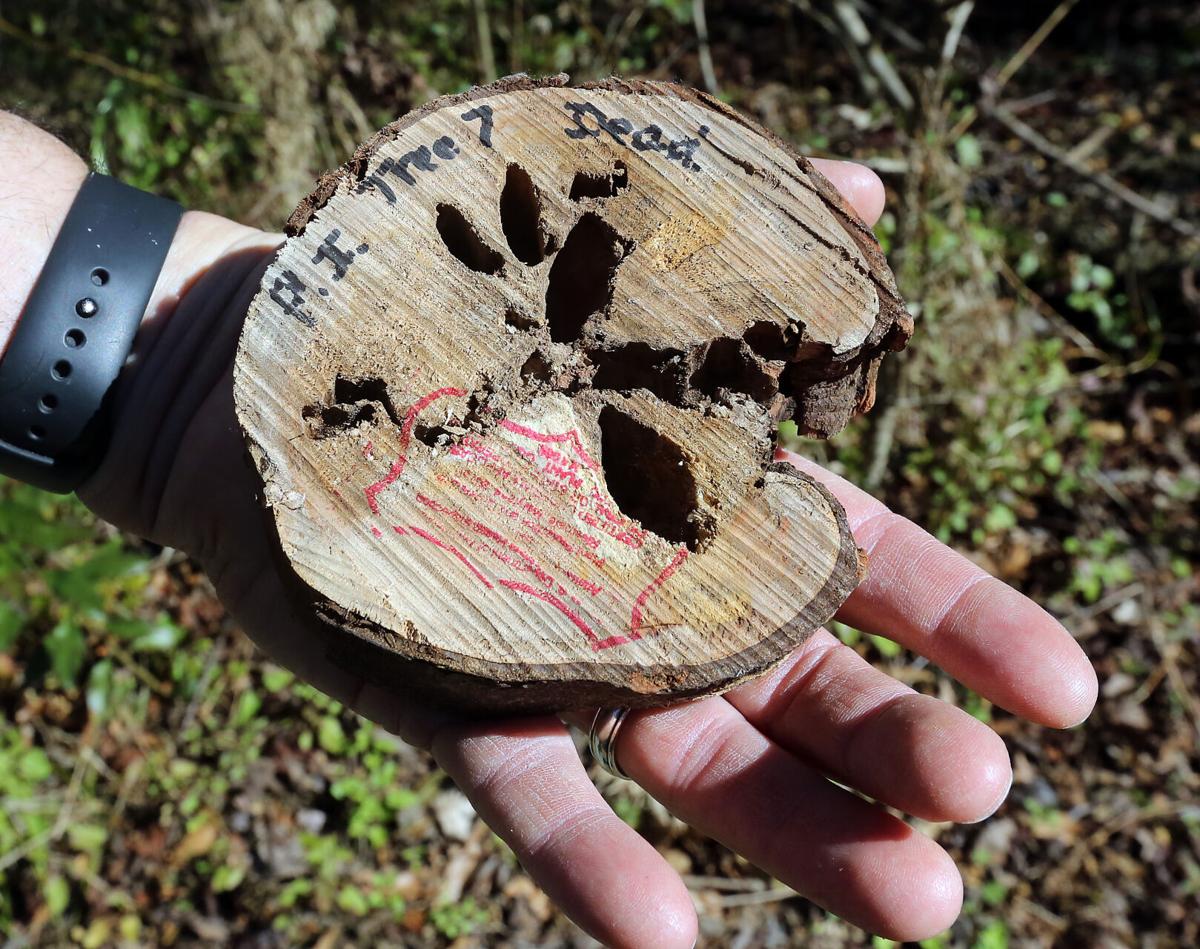 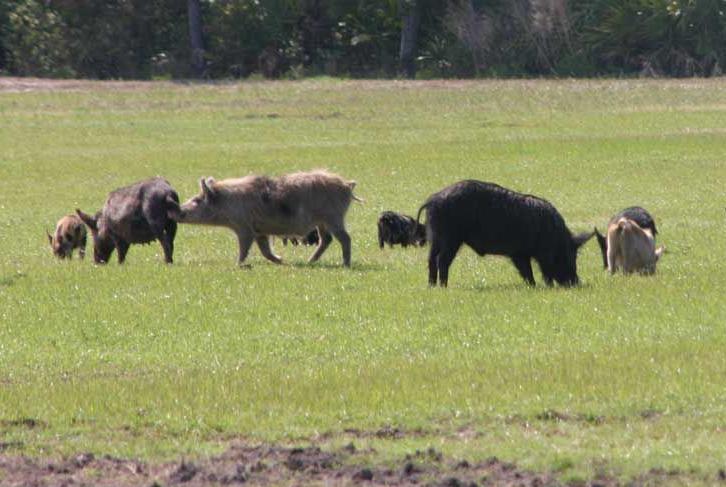 Feral hogs like those seen here are are prolific breeders. File/Clemson/Provided

Tracks from Emerald Ash Borers are left in a tree. File/AP

Over the past 40 years, South Carolina has spent $40 million to rid the state of invasive aquatic plants, such as hydrilla, covering more than 206,000 acres.

And those are just for foreign plants in the water.

Invasive species — both plant and animal — of all types cover South Carolina soil, forests and waterways. Some of them are fairly new to the Palmetto State. Others have been around for hundreds of years.

They are all potentially problematic to varying degrees. That's because the introduction of invasive species is one of the top reasons native plants and animals become endangered or threatened. These so-called "invasives" often compete with, prey on and displace native species.

Here are some of the state's top concerns.

Weighing around 200 pounds, wild hogs released by the Spanish in the 1500s have become one of the most intrusive breeds competing for resources in the Palmetto State today.

Charles Ruth, a big game program coordinator for the S.C. Department of Natural Resources, said when Spanish explorer Hernando de Soto roamed the Southeast, he brought a few pigs over with him. Some of the hogs escaped and made a home along the lower Savannah River floodplain.

That was nearly 500 years ago.

To this day, wild hogs are competing with native animals such as deer and wild turkeys for food and basic habitat. DNR estimates as many as 140,000 wild hogs roam South Carolina and have been established in every county in the state.

“They’re typically tied to creek areas or particularly these major river floodplain systems that we have, rather than up on high ground,” Ruth said.

From a food standpoint, wild hogs like to eat anything they can get in their mouth and swallow. When they root in search of food, it damages the soil, which can lead to erosion and water quality issues.

Hogs pose an issue for agriculture, too. Ruth said the species’ impact on the timber industry is a good example. After crews cut timber, they go back and plant tiny pine trees in the area. The hogs have been known to eat the newly planted seedlings.

There are methods to control them but there are so many. There is no closed hunting season for the animals in South Carolina, but hunters must have a license. Night hunting is allowed. People can also trap the hogs at any time without a permit or license.

The illegal transport of feral hogs has become a problem in rural South Carolina, and a bill in the S.C. Legislature aims to prevent people from doing so.

Asian longhorned beetles have been on the radar in South Carolina since June when they were first detected in the Hollywood area of Charleston County.

The bugs are native to China and Korea and are known to travel to new areas through shipping crates, wood-packing materials and firewood. They burrow inside trees. Once they are large enough, the beetles chew a tunnel out. The holes left behind weaken the wood, which can cause the trees to break and fall apart.

Close to 4,000 infested trees have been identified so far in Charleston County. Officials with the U.S. Department of Agriculture believe the infestation has likely been present in the area for at least seven years.

The USDA and Clemson University are working to control the situation through the removal of trees. Steve Cole, director of regulatory and public service programs at Clemson, said taking down infested trees is the only way to really control the pests.

There have been more than 400 tree removals in Charleston County, including in the Stono Ferry neighborhood and recently the Stono River County Park in Johns Island.

It could take years to fully control the situation.

Tallow is one of the most aggressive and widespread invasive weeds in the Southeastern United States. It has been reported primarily in 10 states, including along the South Carolina coast and in North Carolina and Georgia.

The USDA describes tallow as a weed with dark green bark and hairless leaves that could grow as a large shrub or a tree reaching up to 60 feet tall.

There are different opinions about how the Chinese tallow tree got to America. Dr. David Coyle, a forest health and invasive species professor at Clemson University, said experts primarily believe the plant was brought over by Benjamin Franklin just before 1800. He wanted to use it to start a candle industry.

“You can extract this tallow oil from the seeds and stuff,” Coyle said. “And his thought was, you know, back in the day when everyone used candles, he would make this candle industry from the Chinese tallow and get wealthy and all that type of thing.”

Tallow is one of the few plants in the fall that makes pretty red foliage, Coyle said. Some beekeepers still value the plant because the pollinators like them. But tallow is so aggressive that it can completely take over and turn marsh areas to scrub lands.

Coyle said there is no real value to the plants as they can’t be used for lumber or anything like that. But they essentially take over and push out native plants.

The USDA has proposed issuing permits to release Asian beetles (Bikasha collaris) and moths into environments affected by tallow to help control the situation. The USDA’s Animal and Plant Health Inspection Agency said other management options like chemicals and physical and mechanical control only provide temporary solutions.

The USDA doesn’t expect the suggested insects to have significant environmental impacts.

This tree is native to China and produces some of the first white flowers of the year. These aggressive plants include stems and branches with thorns that can reach up to 3 inches long. They can spread by seed or through roots and quickly take over a roadside, old field, pasture or vacant lot, according to Clemson. The ecological implications of the callery pear invasion are still unknown.

This fungus is spread by the redbay ambrosia beetle. Coyle said it affects any species in the plant family Lauraceae, which includes bay trees, sassafras and avocado. Infection is generally lethal to the tree. It is estimated that 300 million to 500 million trees have been killed in the Southeast.

The USDA said the emerald ash borer is responsible for the destruction of tens of millions of ash trees in the United States. The small beetle is found in several Upstate counties. It is widely considered the most impactful forest invasive species of this generation, Coyle said.

Cogongrass is one of the most concerning weeds in the Palmetto State. It is scattered in about a dozen counties in the state but found mostly in the Lowcountry. The S.C. Forestry Commission said the plant is native to Southeast Asia and is particularly a forest pest.

The plant increases fuel loads, so forest fires or prescribed burns in infested stands can get hotter than the trees can take, the commission said. When the trees die, increased light allows the plant to explode and convert a forest to grassland.

Coyle said nothing eats the weed and it is costly to eradicate.

Chris Page, the manager of DNR's aquatic nuisance species program, said water hyacinths have been one of the biggest problems in the state lately as far as aquatic invasive species are concerned.

The floating plant grows more in lakes, but they can get into rivers and streams, too.

"It doubles its biomass every two weeks in the summertime, roughly," Page said. "So you can image big masses floating around."

Page said the water hyacinth is a beautiful plant, but it can be very problematic for all sorts of things.

The plant's growth in the state's coastal counties have blocked water access and use in places including the Goose Creek and Black River reservoirs and the Ashepoo, Cooper and Pee Dee rivers.