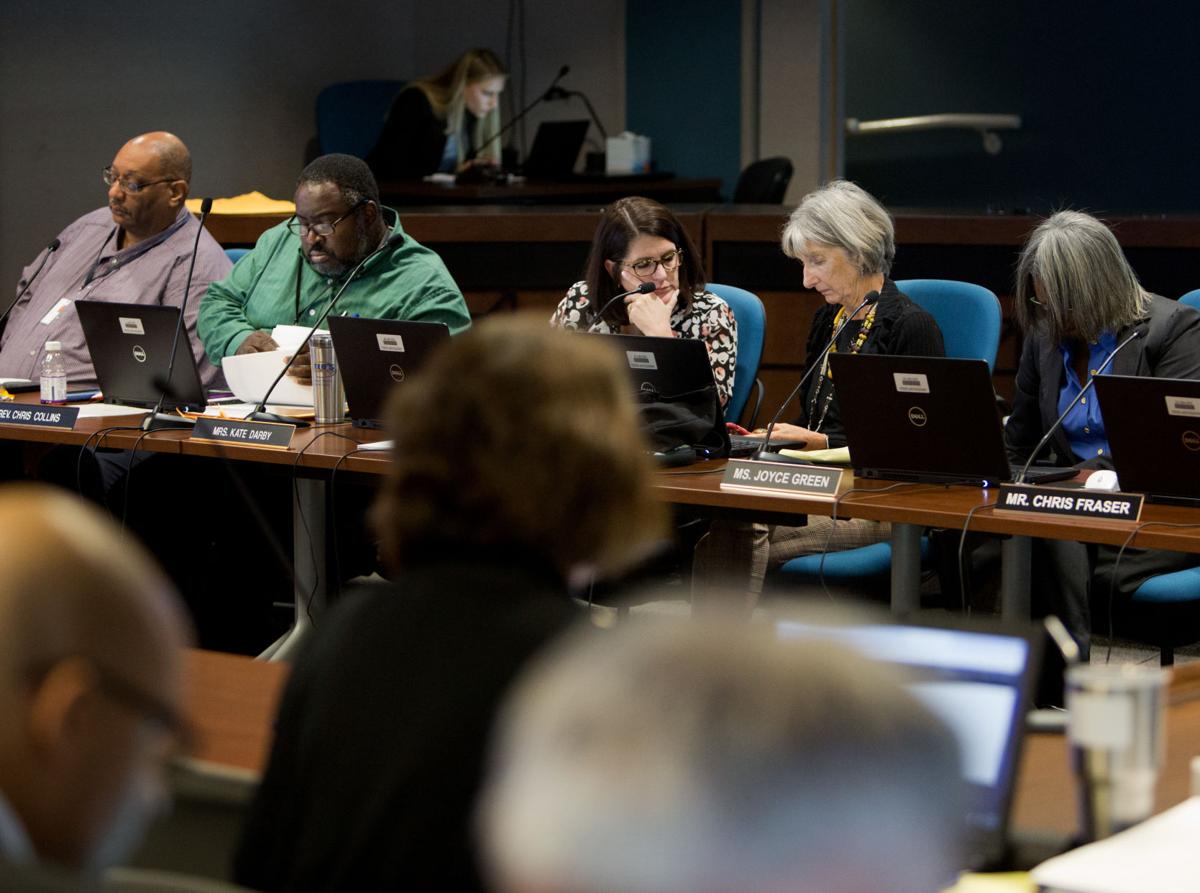 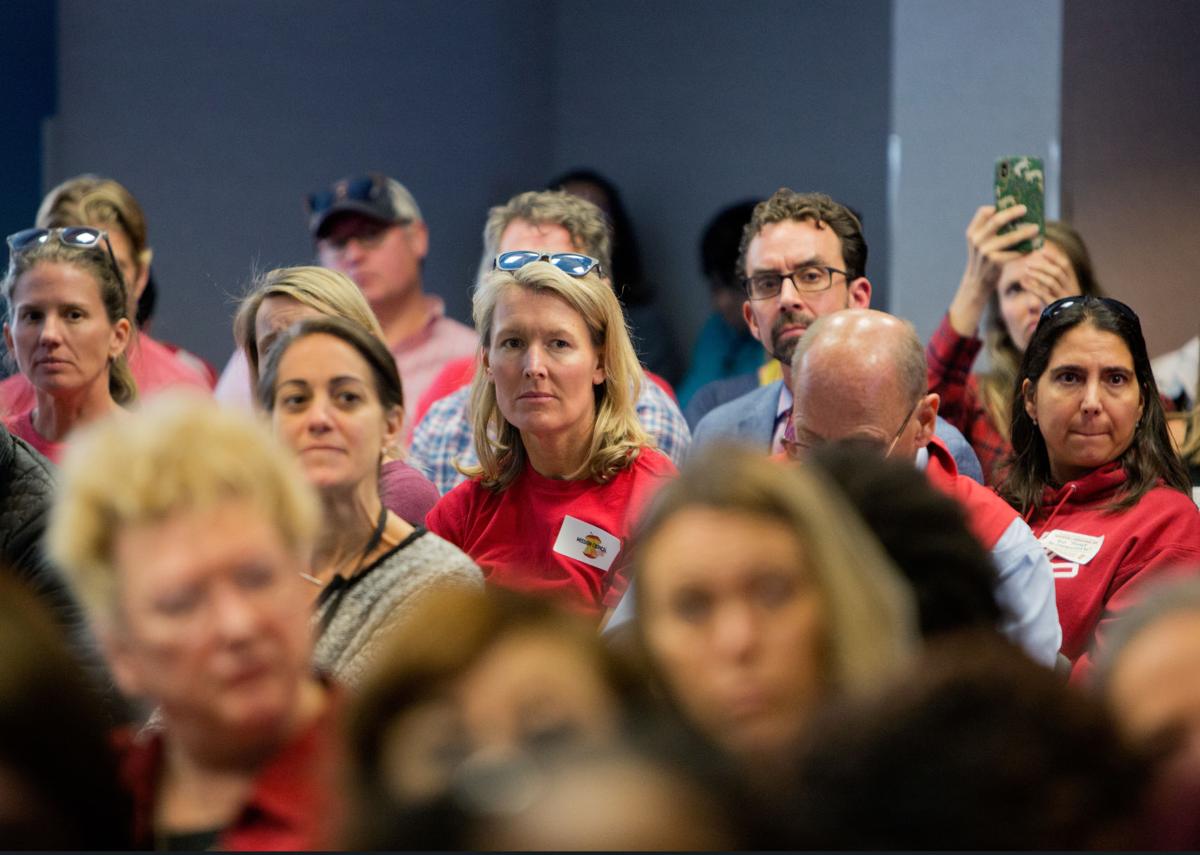 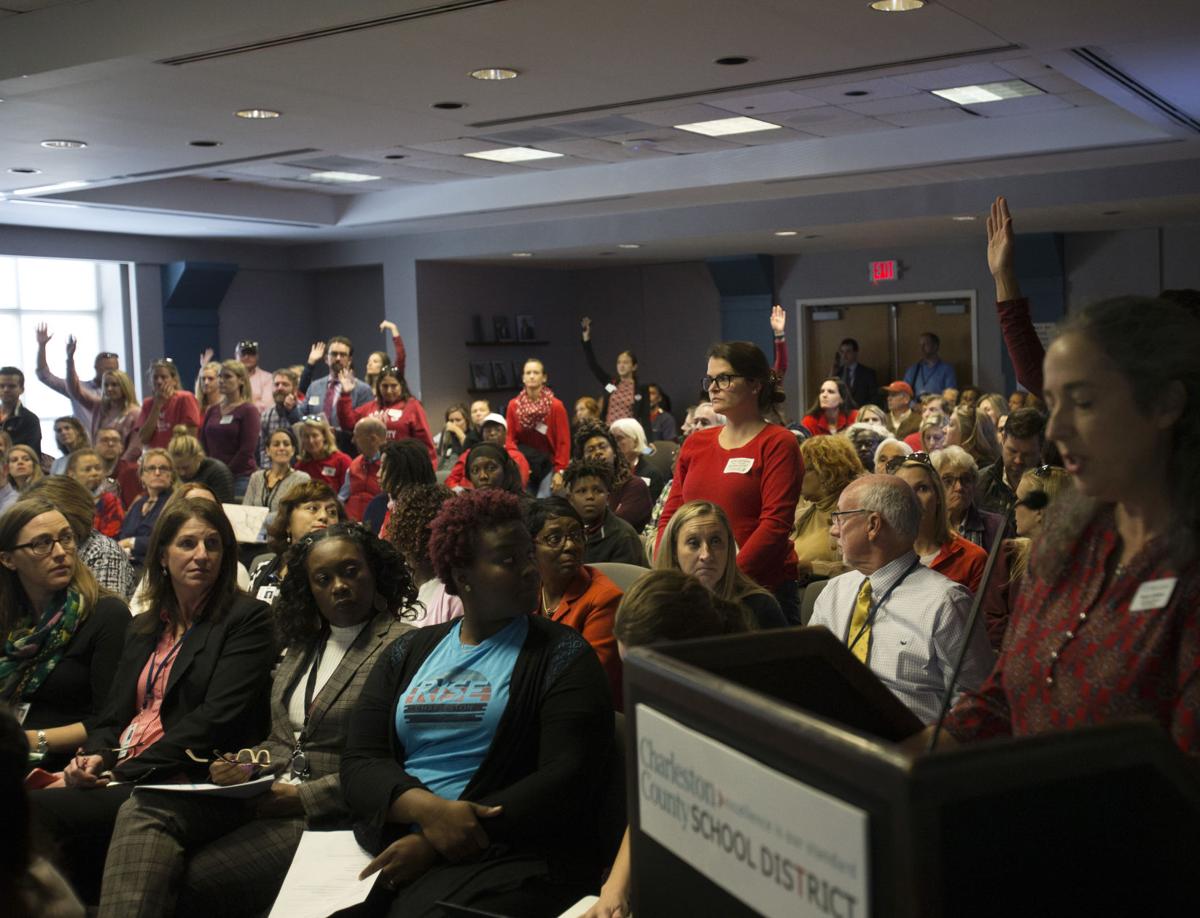 Sarah Johnson, a Constituent District 2 board member, addresses the Charleston County School board during a meeting Monday Nov. 11, 2019. Gavin McIntyre/Staff

The Charleston County School Board is moving forward with bold and controversial changes that could affect more than 40 of the district’s 87 public schools and programs, despite growing pushback and an organized protest Monday.

During the board's 5½-hour-long meeting, board members debated details of more than 20 recommendations designed to provide more equitable opportunities for all students.

The specific ideas have changed three times during the past two months, and Monday was the first time the board had the opportunity to discuss, review and vote on the district’s formal recommendations.

Some proposals, like a plan to build a new Ladson Elementary and create an early childhood education center in its place, sailed through on a unanimous vote. Others, like the plan to combine Lambs, Hunley Park and W.B. Goodwin elementary schools on one North Charleston campus, were split, but passed with 6-3 vote. Board members Kevin Hollinshead, Cindy Bohn Coats and Chris Collins cast the dissenting votes.

Despite protests, Charleston County School Board moves ahead with several changes

Collins worried about the impact of combining at-risk students on one large campus.

“There’s no clear goal, clear academic vision or strategic plan in place that’s going to make sense," he said of the consolidation. "You’re not housing goats or sheep. These are students.”

"I also have been a sheep farmer. I don't believe that they are treating our children like goats or sheep," Board Member Priscilla Jeffery countered.

"There are professionals sitting here who work for us, who've been working on this for a very long time and have a lot of collective experience," Jeffery said. "I think it's really disrespectful to assume that they have done less than their best."

Most of the agenda items that were approved Monday will be brought to the board for a final vote on Nov. 18. The board delayed a final vote on changes to partial magnets, Buist Academy for Advanced Studies, Memminger Elementary and Academic Magnet High School until Dec. 16.

Here's a summary of where the changes stand:

Charleston school board to vote on major changes, despite community pushback

Schools known as constituent magnets usually have a defined attendance zone. They differ from partial magnets in that additional seats are allocated to students living outside the attendance zone but within the constituent district.

The board voted to remove the partial magnet status of James B. Edwards Elementary, Jerry Zucker Middle and Mitchell Elementary. Students outside of the attendance zone for those schools may apply to attend through the student-transfer process.

The board also voted to eliminate the partial magnet status of Haut Gap Middle. If it gets final approval, the school will become an advanced studies constituent magnet for eligible District 9 and Camp Road Middle School students. Preference would be given to District 9 students, who typically attend schools on Johns Island.

The board passed a motion to leave Sullivan’s Island Elementary School as is and remove it from a list of schools that might lose partial magnet status. This action is final and does not need a second vote to approve.

The board voted to remove Laing Middle School’s partial magnet status. If it gets final approval, it will have a defined attendance zone and will serve as a constituent magnet for students who live in constituent districts for St. James Santee and Mount Pleasant.

The board did not approve a recommendation that would have directed the district to consider eliminating the partial magnet status of St. Andrews School of Math & Science. This action is final and does not need a second vote to approve.

The board voted to remove the partial magnet status of North Charleston Creative Arts Elementary and Jennie Moore Elementary. If the recommendation gets final approval, they will be transitioned to constituent magnets with attendance zones for students living in constituent districts for North Charleston and Mount Pleasant/St. James Santee, respectively.

The board approved a motion to allow existing students that would be impacted by changes to partial magnet schools to stay in the school until they age out. The district will look into the cost of providing transportation for those students.

The board approved a recommendation to evaluate the additional staff in place at partial magnet schools and determine if continued funding of the positions is warranted for 2021-22.

The board approved a plan to transition Mary Ford Elementary School to a full-scale early childhood and family engagement center. Mary Ford students would be rezoned to Chicora Elementary. The change will be considered for final approval at the Nov. 18 meeting.

The board approved a motion to include the construction of a new Ladson Elementary School in the 2020 penny sales tax referendum. The former campus would be renovated and converted into another early childhood and family engagement center. The change will be considered for final approval at the Nov. 18 meeting.

The board approved a plan to combine Lambs, Hunley Park and W.B. Goodwin elementary schools at a renovated Lambs campus through the 2020 penny sales tax referendum. If approved, either the Hunley Park or the Goodwin campus would be renovated to house a third early childhood and family engagement center in North Charleston. The motion will be considered for final approval at the Nov. 18 meeting.

The board approved a plan for new enrollment guidelines at Academic Magnet High School. Up to 30 percent of the seats would be offered to students who meet admissions criteria and also attend a middle school in Charleston County that has a poverty index of 80 percent or higher. The "top two" program that admits the top two students from every CCSD middle school who meet admissions criteria would continue.

All remaining applicants would be rank-ordered by criteria score to fill available seats. This plan has changed from a previous version presented to board members last month. It will be considered for final approval at the Dec. 16 meeting.

The board approved a plan to change the grade structure and enrollment process at Buist Academy for Advanced Studies. The school would shift from a K-8 grade school to a third- through eighth-grade school.

No new K-2 students would be added next year, and grades K-2 would be phased out by the 2023-24 school year. Grades 3-6 would be expanded by one class per grade next year. For 2020-21 only, priority entrance would be given to students scoring at the 75th percentile or higher on MAP reading or math who attend an elementary school in Constituent District 20 or elementary schools in Charleston County with a poverty index greater than 80 percent. New entrance criteria for third-graders would be developed by July 2020. The plan will be considered for final approval on Dec. 16.

The board approved a plan to convert Memminger Elementary to a countywide International Baccalaureate magnet with a K-2 advanced academic component starting next year. Additional kindergarten students will phase in next year. Eligible students living downtown in Constituent District 20 will receive seating priority. The existing attendance zone will stay in place. In 2023-24, eligible third-graders from the K-2 advanced program would be served in the school's advanced academic program or could apply to Buist. The plan will be considered for final approval on Dec. 16.

The board gave initial approval to create an advanced academic program at West Ashley High School through a partnership with the College of Charleston. As soon as they are ready to do so, students would begin enrolling in college-level coursework. Eligible students from Burke High School would attend the program for half or full days while remaining enrolled at Burke. The plan will be considered for final approval on Nov. 18.

Two West Ashley middle schools would be consolidated by putting all sixth-graders at West Ashley Middle and all seventh- and eighth-graders at C.E. Williams Middle. The recommendation will be considered for final approval on Nov. 18.

A plan to return Haut Gap Elementary to a middle school for grades 6-8 was approved. Fifth-grade students would remain at their respective elementary schools. The recommendation will be up for final approval on Nov. 18.

The board approved a motion to include the construction of a new elementary school on Johns Island on the 2020 penny sales tax referendum. The location of the new school has not been determined. The recommendation will be up for final approval on Nov. 18.

A plan to combine Minnie Hughes Elementary and E.B. Ellington Elementary at Ellington's campus next year was approved. The district will also conduct a transportation study to determine if Jane Edwards Elementary should be considered as an enrollment option for some Minnie Hughes students. The decision will be up for final approval on Nov. 18.

Editorial: Big changes for Charleston schools? School board, parents must work together

A motion passed to study the feasibility of creating one Montessori middle school to house seventh- and eighth-grade students from Murray LaSaine, James Simons, Hursey and Montessori Community schools for the 2020-21 school year. The recommendation will be considered for final approval on Nov. 18.

A motion to revamp the gifted and talented program to ensure that at least 5 percent of students at each school in grades 3-8 receive services designed to advance academic achievement passed. This recommendation will be up for final approval Nov. 18.

The district also will designate 15 schools as “acceleration schools,” including those identified for State Comprehensive Support and Improvement; State Priority Schools; schools with both unsatisfactory overall and student achievement ratings; and K-12 feeder patterns of schools with low performance.

The board also directed district administration to bring state policy waivers essential to provide leaders of these schools greater autonomy for approval in December. The plan will be considered for final approval on Nov. 18.