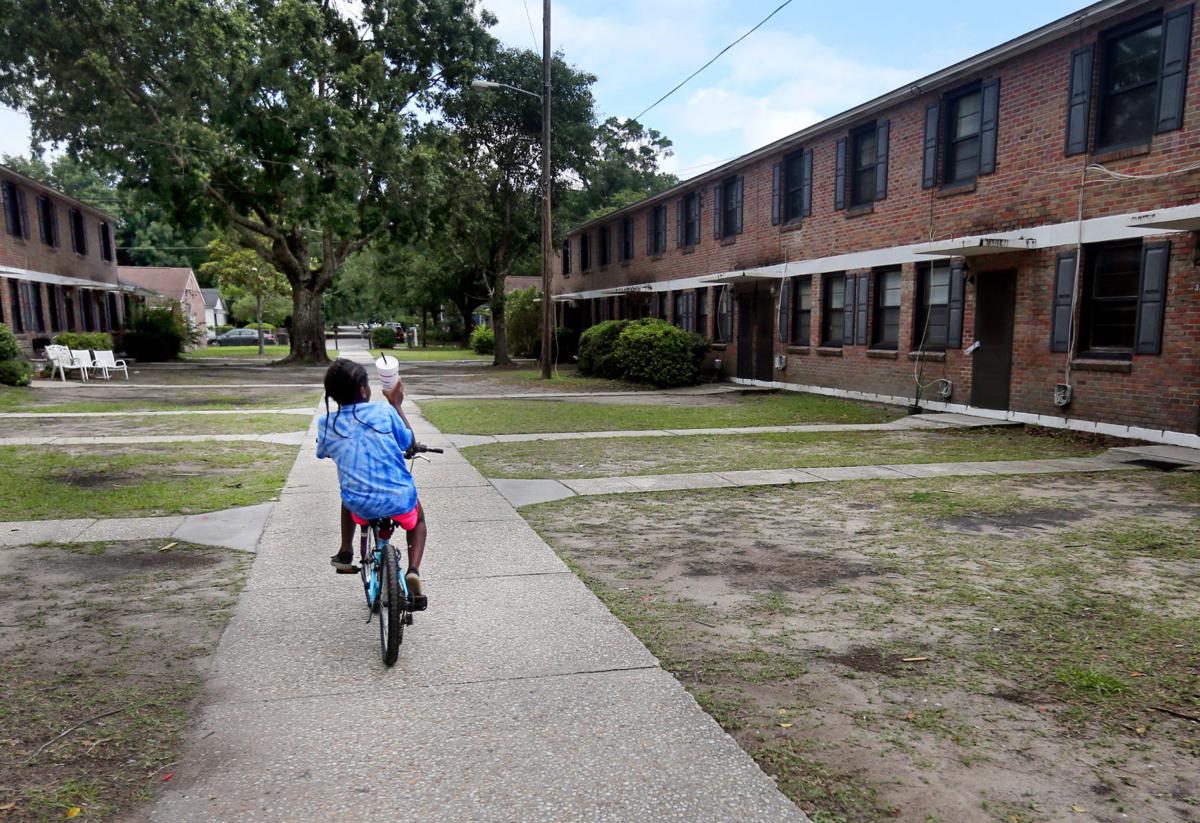 Children play on the sidewalks around the Edmund Jenkins Homes in the Old Village of Mt. Pleasant Thursday May 31, 2018. Grace Beahm Alford/ Staff 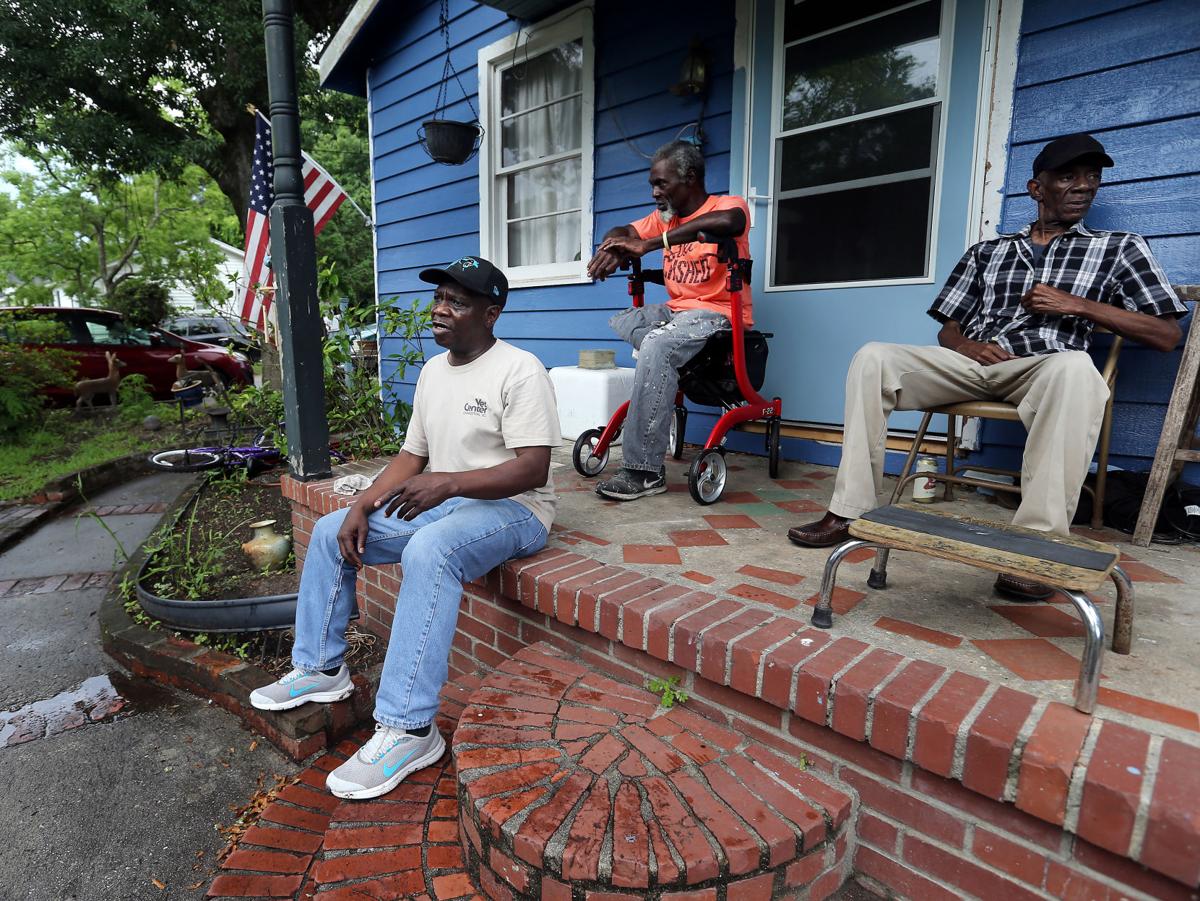 Edgus Conyers spends the afternoon with friends Benjamin Rainey and Edward Robinson across the street from the at the Edmund Jenkins Homes in the Old Village of Mt. Pleasant Thursday May 31, 2018. Lifetime residents Conyers and Robinson both lived for a time at the Edward Jenkins Homes. Grace Beahm Alford/ Staff 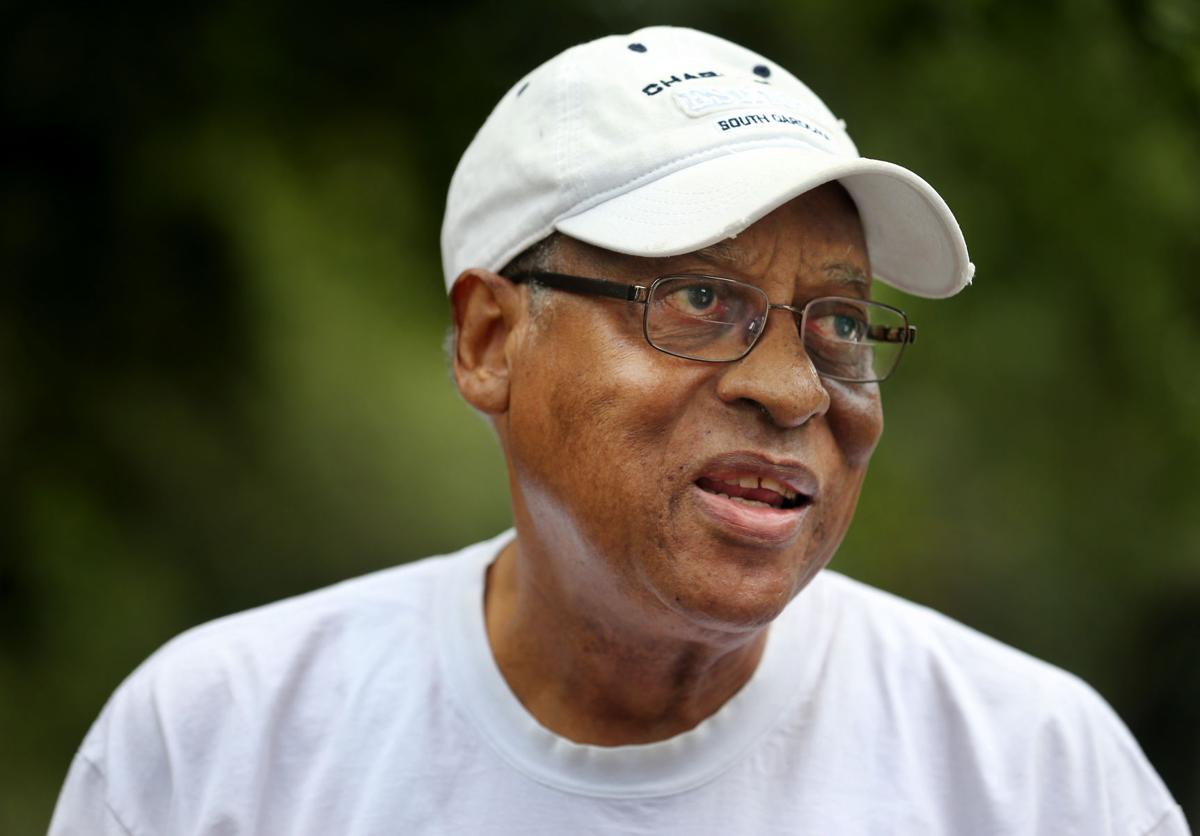 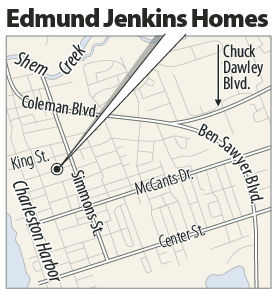 Children play on the sidewalks around the Edmund Jenkins Homes in the Old Village of Mt. Pleasant Thursday May 31, 2018. Grace Beahm Alford/ Staff

Edgus Conyers spends the afternoon with friends Benjamin Rainey and Edward Robinson across the street from the at the Edmund Jenkins Homes in the Old Village of Mt. Pleasant Thursday May 31, 2018. Lifetime residents Conyers and Robinson both lived for a time at the Edward Jenkins Homes. Grace Beahm Alford/ Staff

MOUNT PLEASANT — South Carolina's fourth-largest city was quite a different place in 1950, a racially diverse town with fewer than 1,900 residents. Even then, affordable housing was a problem.

These days, with sky-high rents and the average single-family home selling for more than $630,000, housing is increasingly out of reach. And a small apartment complex built in 1953 still accounts for all of the government-subsidized housing in the town.

"I was born in that house, right behind the project," said retiree Edgus "Gus" Conyers, pointing just past the Edmund Jenkins Homes complex on Bank Street in the Old Village.

Conyers, born in 1952, was among the black residents of Mount Pleasant who accounted for 44 percent of the town's population at the time, and less than 5 percent now. An Army veteran and Mount Pleasant homeowner now, Conyers lived in the Jenkins Homes as a child and still meets with friends who live nearby.

"That's stayed there, while everything around here changed," he said.

When a reporter started asking Conyers and friends he had gathered with about the history of Jenkins Homes, one of the men zipped off in his car and quickly returned with 84-year-old Walter G. Brown Jr., who was a long-serving member of the town's Historical Commission.

Brown said the 28-unit apartment complex, which is owned by the Charleston Housing Authority, offered some residents of the community better living conditions than they had at the time.

"We had what they called 'row houses' — a row of one-room houses, with a toilet out back and a water spigot next to it," Brown said.

"It was basically for the domestic workers," Brown said.

He credits then-Mayor Francis Coleman for asking the Charleston Housing Authority to build the Jenkins Homes, which were named in honor of a black town resident who was the town's marshal from 1920 to 1927. He died in 1930.

“It was kind of the original workforce housing, before that term existed," said Charleston Housing Authority President and CEO Don Cameron. “It’s the only public housing in Mount Pleasant."

“My understanding is that way back in the early '50s, there was only one housing authority in the area, and that was us," he said. “The housing authority was approached by Mount Pleasant, which was concerned about housing for sanitation and public works employees, close to work."

Since the mid-20th century, Mount Pleasant has expanded its boundaries and grown from 1,857 residents in 1950 to an estimated 86,668 in 2017. Housing costs soared as well, and in 2008 the town briefly attempted to incentivize private developers to create, at least temporarily, more affordable houses and apartments.

That effort resulted in 10 homes and 18 apartments sold or rented at below-market rates, targeted at middle-income residents. Elsewhere in the Charleston area, there are about 1,000 "workforce housing" apartments for middle-income tenants, who are not low-income and may earn more than most people in the area.

Mount Pleasant's workforce housing effort had a short life. Amid growing resentment over development and large apartment complexes, the town in 2015 eliminated the "density bonus" incentives that had created the 18 less expensive apartments at The Boulevard apartments on Coleman Boulevard. Then the town created a task force to study affordable housing.

None of its efforts or studies, though, have contemplated housing for low-income residents who mostly include residents earning less than 80 percent of the area's median income. By contrast, workforce housing often is built for tenants earning up to 120 percent or even 150 percent of the middle income for the area.

Jenkins Homes is the only place low-income housing exists in Mount Pleasant, and it's possible there because it's government subsidized and the Charleston Housing Authority has owned the property since the 1950s. Residents pay 30 percent of their income, whatever that may be, for rent and utilities.

“If the town had a hand in it, they would probably tear it down and build condominiums, or something,” said Jenkins Homes resident Jesse Simmons.

The federal government has been providing less and less support for public housing, and the long-term future of Jenkins Homes is not clear.

"In the foreseeable future, I would see the property probably being enhanced, working toward extending its useful life," Cameron said. "Longer term, I think we will have to look at what HUD (the U.S. Department of Housing and Urban Development) calls 'repositioning the asset.'"

He said the Charleston Housing Authority is committed to keeping at least the same number of housing units in Mount Pleasant, but "repositioning the asset" could mean eventually redeveloping the property where Jenkins Homes sits.

Meanwhile, Cameron said the authority plans some improvements at Jenkins Homes, such as landscaping and painting.

A Mount Pleasant proposed a ballot referendum asking voters if they would pay a little more property tax in order to fund $10 million in land purchases by the town.