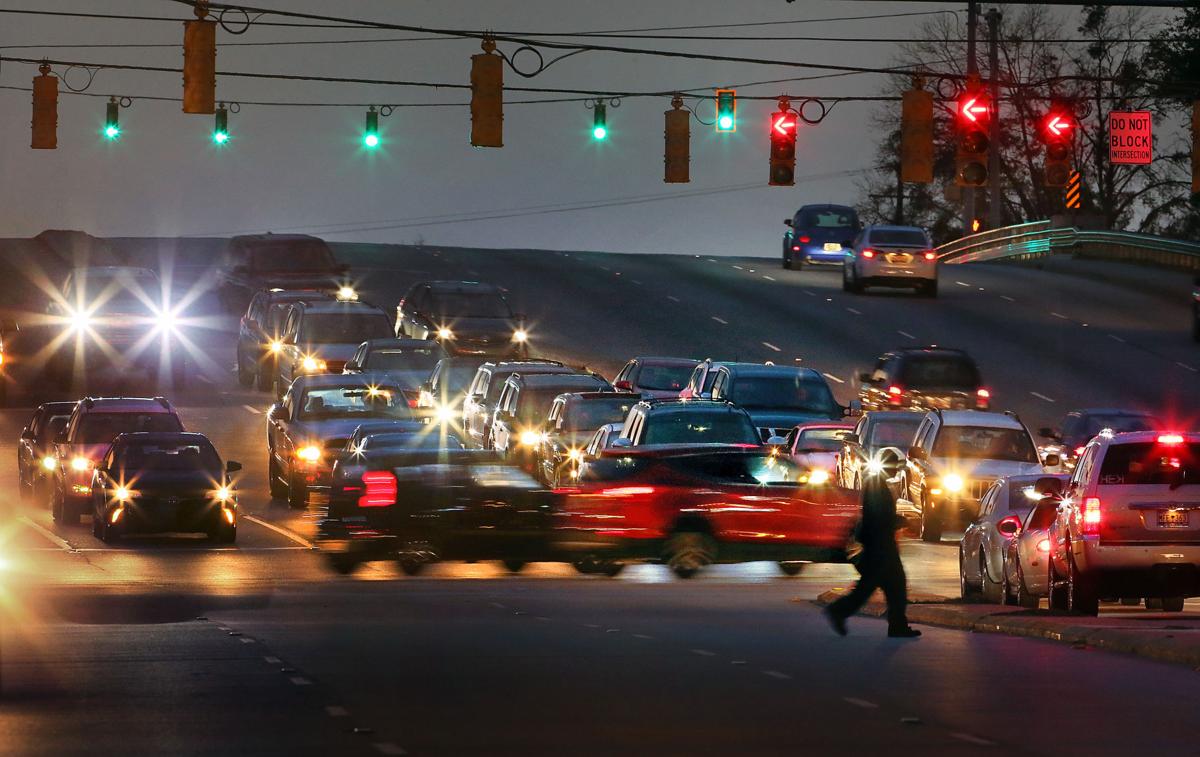 A man walks on Ashley Phosphate Road where it crosses Interstate 26. With talks surrounding social-distancing efforts, advocates for alternative modes of transportation are hoping the COVID-19 pandemic has offered new insight into the importance of biker and walker safety.  File/Staff 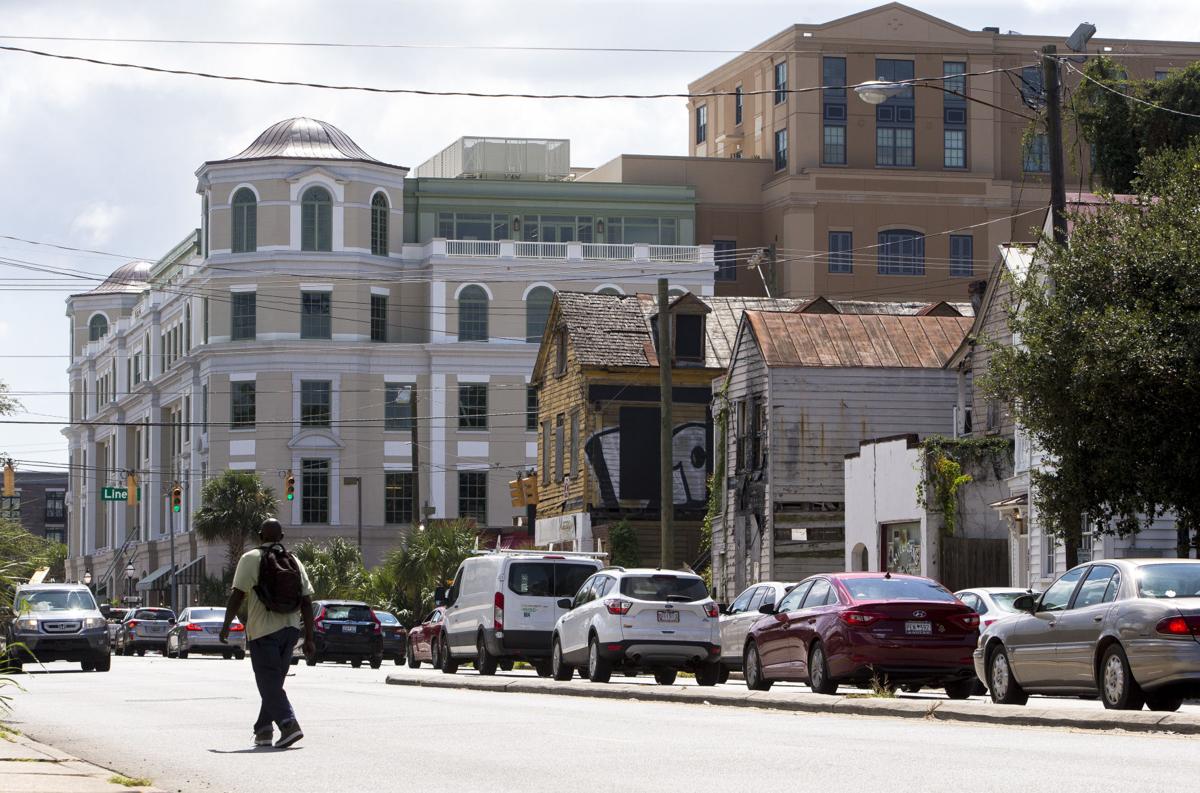 A person walks across Meeting Street near The Guild apartments on Wednesday, Sept. 26, 2018, in Charleston. Advocates for alternative modes of transportation are hoping the COVID-19 pandemic has offered new insight into the importance of biker and walker safety. File/Andrew J. Whitaker/Staff 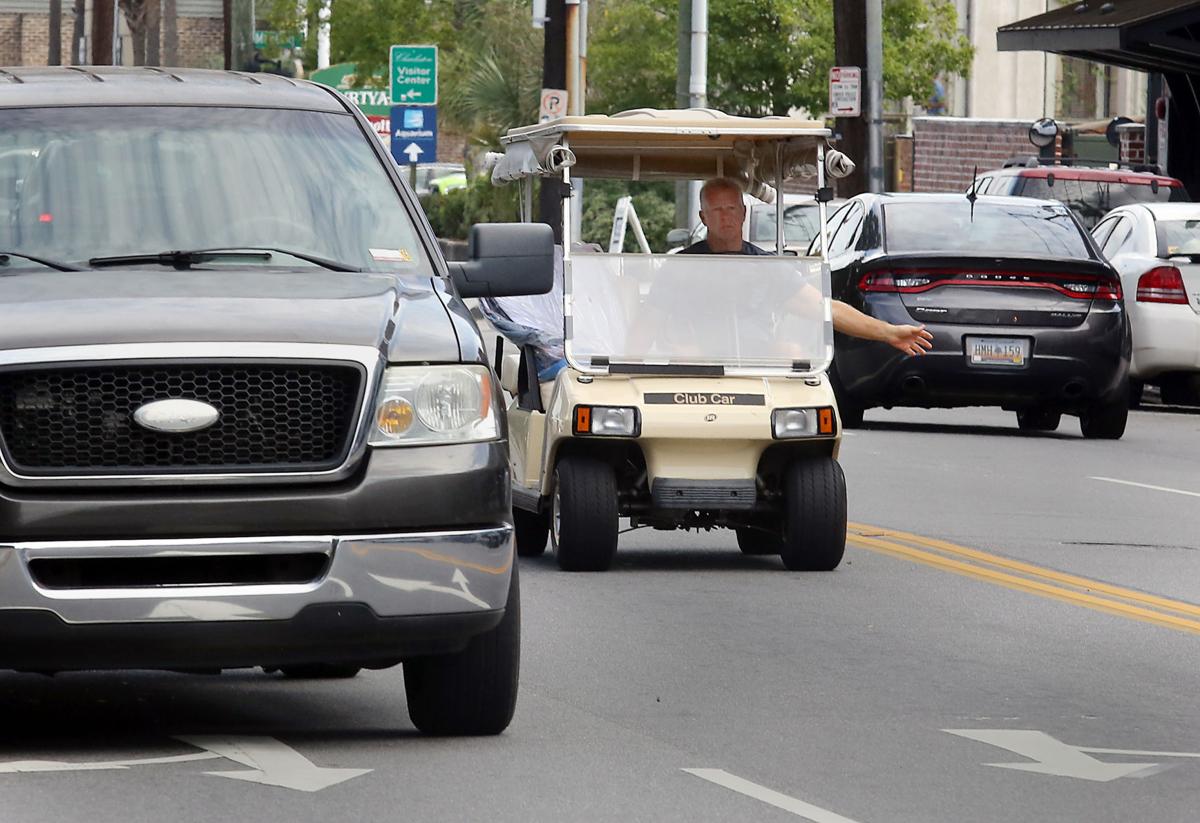 A man driving a golf cart down Calhoun Street signals to other drivers that he is preparing to turn onto Charleston's King Street in October 2018. King Street may eventually get a dedicated lane for cyclists. File/Brad Nettles/Staff

More than a month before the coronavirus forced people outdoors, representatives from state and local agencies walked one of the area's most dangerous corridors to discuss ways to make it safer for pedestrians and bikers.

But then the pandemic ripped through the state, forcing stay-at-home orders and leaving typical rush-hour chokeholds, such as Ashley Phosphate Road, less congested.

While this has temporarily offered more space for biking and walking, non-motorists know this new benefit will be short-lived as officials take steps to reopen the economy.

Five of South Carolina’s top ten most dangerous corridors for bikers and walkers are in Charleston County.

With talks surrounding social-distancing efforts, advocates for alternative modes of transportation are hoping the crisis has offered new insight into the importance of biker and walker safety.

"The silver lining of this pandemic is this new reality we’re dealing with probably helps implement designs we talked about months ago," said Charleston Moves Executive Director Katie Zimmerman, who oversees a nonprofit that encourages alternative modes of transportation.

In collaboration with municipal agencies, engineers and nonprofits throughout the state, the S.C. Department of Transportation recently completed field audits for South Carolina's 10 most dangerous corridors for walkers and bikers. Five of those corridors are in the Charleston area, including sections of Meeting, King, Calhoun and St. Philip streets downtown and Ashley Phosphate Road in North Charleston.

Discussions around possible fixes ranged from repainting crosswalks and broken crossing signals on Ashley Phosphate to installing a bike lane on King Street downtown, along with widening the sidewalk for walkers in the bustling business corridor.

Though solutions could be a long way away, advocates are encouraged by the conversations that occurred during the field walks.

Zimmerman said revamping King Street south of Calhoun Street, one of the nation's most popular business corridors, was the most extensive idea discussed. The endeavor would involve turning one of the traffic lanes on King Street into a lane for cyclists.

Zimmerman said she would be "blown away" if the state paid for such a project. She said the single project would be too expensive for DOT, which has to cover the entire state with safety initiatives for non-motorists.

“I appreciate the state is starting to do this stuff," Zimmerman said. "It's long overdue. But it's not enough."

Keith Benjamin, director of Charleston’s Traffic and Transportation Department, said King Street functions already as a one-lane road for traffic, given its parallel parking. He is grateful that other agencies are agreeing that King Street south of Calhoun Street has to be viewed in a different way in order to address pedestrian and biker safety.

“How do we take advantage of the fact traffic is already functioning in a certain way?" he said. “Those opportunities are definitely there.”

The corridors were identified based on bike and pedestrian incidents per mile, and DOT has dedicated $5 million to address non-motorized projects. A multidisciplinary group is currently compiling the reports that will offer recommended safety improvements.

Tailored solutions are being crafted for each corridor and will be provided in the final audits, said Leland Colvin, DOT’s deputy secretary for engineering.

Given $5 million likely won't be enough to cover all of the state's pedestrian and transportation needs, the Berkeley-Charleston-Dorchester Council of Governments said it's willing to help support the endeavor.

The agency would be willing to aid potential safety initiatives, such as crosswalk and bus stop improvements, in addition to projects that would enhance sidewalk connectivity, said Sarah Cox, a planner with the agency.

“We are leveraging where we have control of transit monies to help implement and offset some of those costs," Cox said.

People in the North Area are familiar with the hazards.

North Charleston resident Thaddeus Thompson walks Ashley Phosphate twice a week to grab a bite to eat, visit with friends and get some fresh air. During his trips, he's noticed crossing signals that weren't working. While walking the road May 1, Thompson observed a near-accident when a car almost rear-ended a vehicle preparing to make a turn.

"I feel like people in South Carolina rush for nothing," he said.

Summerville resident Amanda Hill has been without her own car since her vehicle was totaled in January. She was in North Charleston the afternoon of May 1, crossing Ashley Phosphate while holding a bag of groceries and on her way to visit friends. Hill wasn't surprised to hear the corridor is one of the most dangerous in the state for pedestrians, noting commuters aren't actively watching for walkers.

"People are aggressive down here," she said. "You have to be on the offense."

Will Greene lives on Percy Street downtown and mostly walks to his job at the Ralph H. Johnson VA Medical Center. He stopped biking as often after almost getting hit by cars several times. Greene said he's embarrassed one of the nation's top tourist destinations also has some of the most dangerous streets for bikers.

"It's something the city and state need to commit to," he said.

Some say that the coronavirus pandemic has highlighted the need for better infrastructure for pedestrians.

Elisa von Marschall, a downtown resident who works remotely as a data scientist, recently assessed the city's sidewalk data. Most of Charleston's sidewalks were less than 6 feet wide and offer limited space for social distancing, said Marschall, whose study noted some neighborhoods, such as South Windermere, lacked any sidewalks.

During the pandemic, Marschall has observed more people biking and walking, suggesting that people would use alternative modes of transportation if the infrastructure were in place. She hopes the number of pedestrians doesn't decline after the crisis.