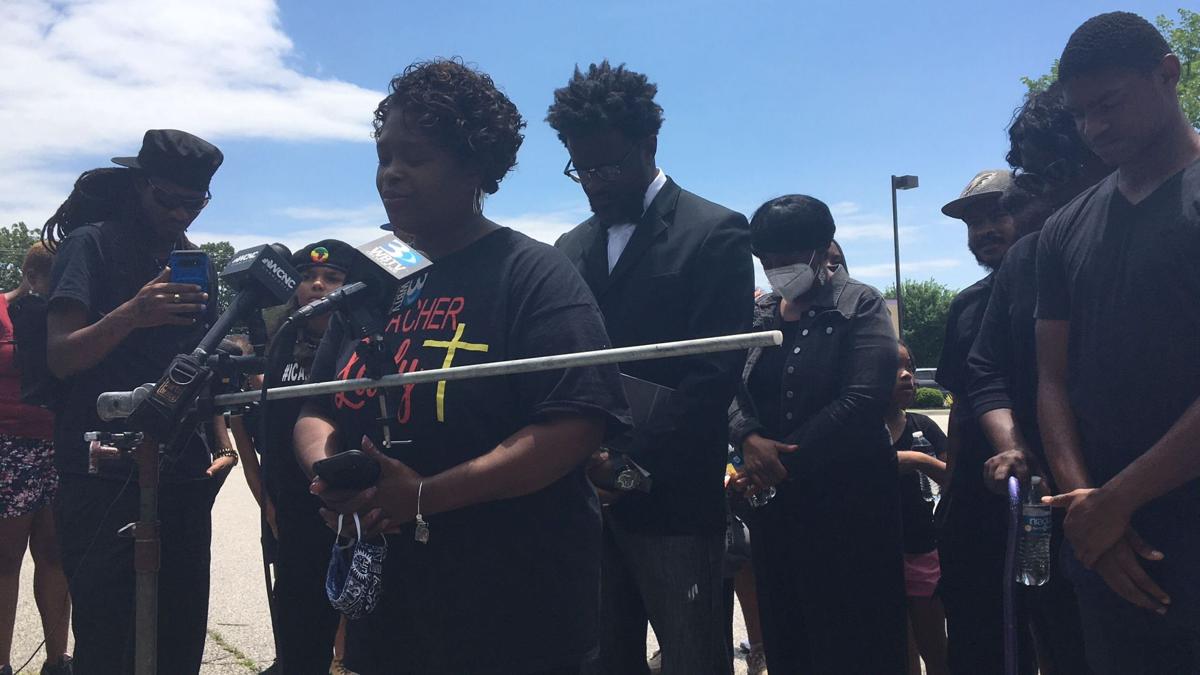 Tabatha Strother, cousin of Ariane McCree, bows her head in prayer along with supporters on Friday, June 12, 2020. After McCree was shot and killed by police, his family has called for the officers involved to be fired and criminally charged. Joseph Cranney/Staff 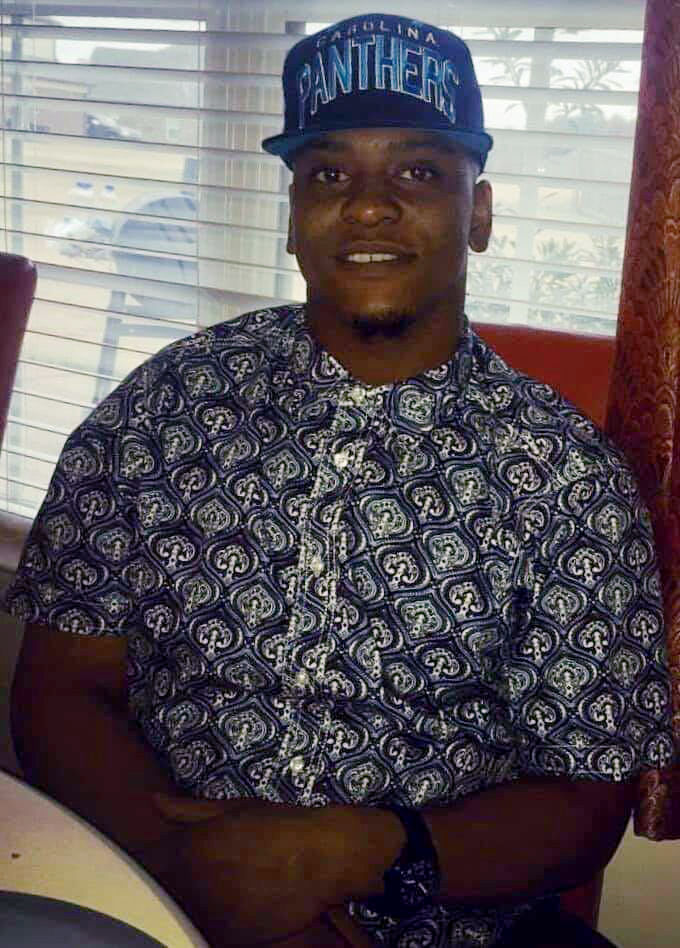 Ariane McCree, 28, was shot and killed by police while handcuffed in Chester on Nov. 23, 2019. Provided

Tabatha Strother, cousin of Ariane McCree, bows her head in prayer along with supporters on Friday, June 12, 2020. After McCree was shot and killed by police, his family has called for the officers involved to be fired and criminally charged. Joseph Cranney/Staff

Ariane McCree, 28, was shot and killed by police while handcuffed in Chester on Nov. 23, 2019. Provided

CHESTER — After months of community unrest, the police department in this small rural city this week released a video of officers fatally shooting a handcuffed black man they said was wielding a gun in a Walmart parking lot last November.

But the grainy police body camera footage failed to provide closure to the family of 28-year-old Ariane McCree, the man shot by officers. They maintain the video does not demonstrate that McCree did anything wrong, and the family called on Friday for the officers involved to be fired and criminally charged.

Two Chester officers, Nicholas Harris and Justin Baker, told investigators they shot and killed McCree only after the former Chester High School football standout aimed his pistol at them while fleeing an arrest for shoplifting.

Mullins McLeod, a Charleston attorney who has filed a wrongful death lawsuit against the Police Department on behalf of McCree's family, has said there is no way McCree could have aimed a gun at officers with his hands cuffed behind his back.

Shell casings recovered from the scene showed the officers fired on McCree at least two dozen times, but there was no forensic evidence that McCree had ever fired his gun, according to the State Law Enforcement Division's report on its investigation. The Post and Courier obtained the report this week through an open records request.

6 takeaways from Post and Courier investigations into SC police tactics

The video released this week does not provide a conclusive answer.

The footage, from Baker's body camera, is of poor quality and lacks audio in important moments because the officer activated his body camera only after the shooting began.

The video shows what appears to be a silver object, possibly McCree's gun, near his right side. But it does not clearly show McCree aiming the gun at officers or even holding it in his hand.

The video does show an officer recovering a pistol by McCree's right side after he collapsed to the ground. Investigators later determined McCree had purchased the Taurus pistol from a pawnshop, according to the SLED report.

SLED's investigation of the shooting found McCree had taken a $45.87 door handle from the store without paying earlier that morning. McCree was detained when he returned to the store two hours later. An officer said McCree headbutted him, sprinted out of Walmart's loss prevention office and then retrieved a gun from his car. A chase through the parking lot ensued, ending with a flurry of gunshots.

Baker shot at least 13 times; Harris, at least 11, according to SLED. The video indicates McCree was about eight cars away from Baker when the officer began firing.

McCree died at the scene from a gunshot wound to the chest.

“It is clear from both officer and witness statements that McCree pointed his gun at the officers while handcuffed and that the officers then responded by firing their weapons at him," the Lexington Republican wrote. "Because the officers acted in self-defense and defense of others present at the scene, the Attorney General’s Office has declined to prosecute the officers.”

The shooting has roiled tensions in this small city of 5,400 between Columbia and Charlotte. Chester has struggled since the textile mills that provided its backbone closed decades ago. Its population is 68 percent black, and about a quarter of its residents live in poverty, according to census figures. It has made headlines in recent years for gangs and brutal murders, including the shooting of a city councilman in 2014.

At a news conference in Chester on Friday, McCree's family criticized officials for waiting more than six months to release the video, which was first published Thursday evening by the Chester News & Reporter.

The family says the video shows McCree was not a threat to officers.

Charlie Stringfellow, McCree’s grandfather, took issue with the police’s use of force after an alleged shoplifting incident.

Chester Police Chief Eric Williams was unavailable to comment Friday because he was dealing with a death in his family, a spokesman said. Chester Mayor Wanda Stringfellow could not be reached for comment. Mayor Stringfellow is the cousin of McCree's mother, according to a family member.

On Thursday, Williams told the Chester News and Reporter that officers are allowed to use deadly force when their lives and the lives of others are put in danger.

Officers used that specific wording in explaining to SLED investigators why they shot at McCree.

"Unfortunately, this young man made a bad decision on that day," Williams told the Chester newspaper. "A decision that cost him his life. Under no circumstances, is that an easy thing for me to deal with, or an easy thing to say. I am also an African American male, but at the same time, I believe in right and wrong, I believe in standing up for what’s right, and in this profession, I believe there comes a time when an officer has to respond in a lethal manner to protect himself and others."

Williams said McCree's family saw the video footage in March, when Wilson decided not to charge the officers involved. He said the Chester police declined to release the video out of respect for the family.

McLeod, the family's attorney, said Williams "is telling the community he is sworn to protect that Ariane aimed and fired a handgun while both arms were handcuffed behind his back and despite the fact that SLED confirmed the weapon they say he had was never fired."

Williams told the paper he didn't know whether the community would accept the police's explanation now that they can see the video.

"But what I can tell you is the facts are undeniable," he told the News and Reporter. "The facts are on the video — they have been vetted, the investigation is done and we are trying to be as transparent as possible.”

Friday morning, a crowd of more than 20 family and supporters gathered outside the Walmart parking lot where McCree was killed. The store was closed after protesters had marched through it Thursday night.

Supporters came from as far away as Charlotte and Marion, S.C. They broke out in chants of, “No justice, no peace.”

“I don’t know about the peace,” Melvin Hughes cried out. “They don’t ask for peace when they come to get you.”

Hughes, a bishop, traveled from Winnsboro. He grew up with the McCree family and noted what he described as the area’s broken relationship with law enforcement.

"There is no unity within the community."