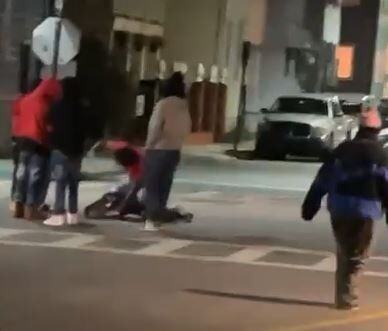 A 62-year-old homeless man is attacked in downtown Charleston the evening of Wednesday, Jan. 20, 2021. Police are investigating. Provided 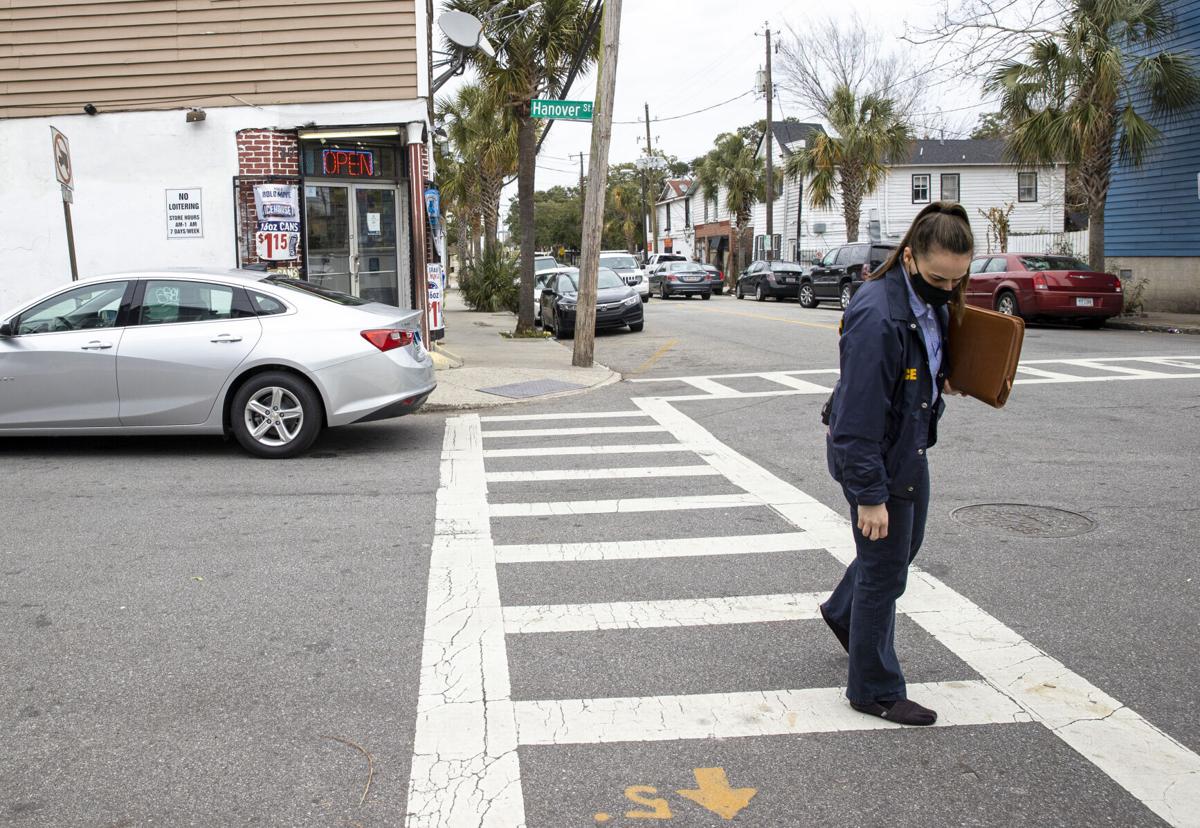 Officer Lacey Chesser with the Charleston Police Department looks for clues at the intersection of Columbus and Hanover streets on Thursday, Jan. 21, 2021, a day after a 62-year-old man was beaten Wednesday night and hospitalized. Andrew J. Whitaker/Staff 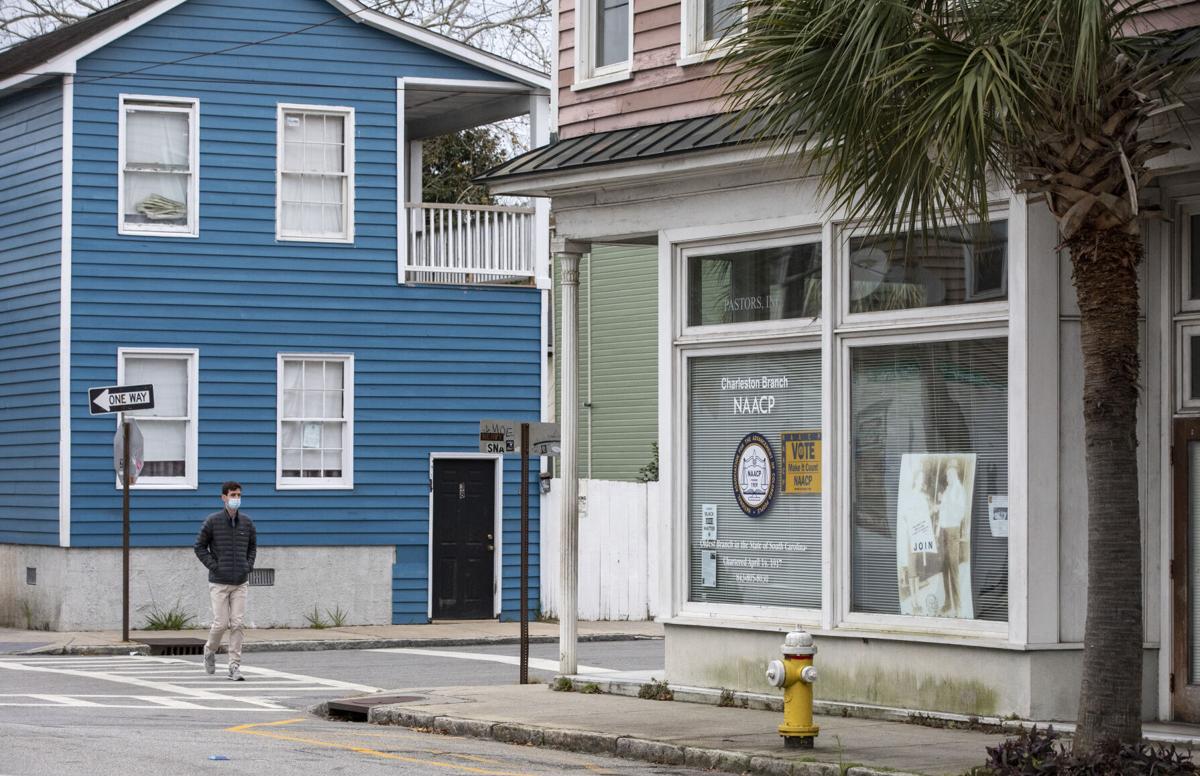 The intersection of Columbus and Hanover streets in downtown Charleston is pictured Thursday, Jan. 21, 2021, after a 62-year-old man was beaten in the middle of the street Wednesday night and hospitalized. Andrew J. Whitaker/Staff 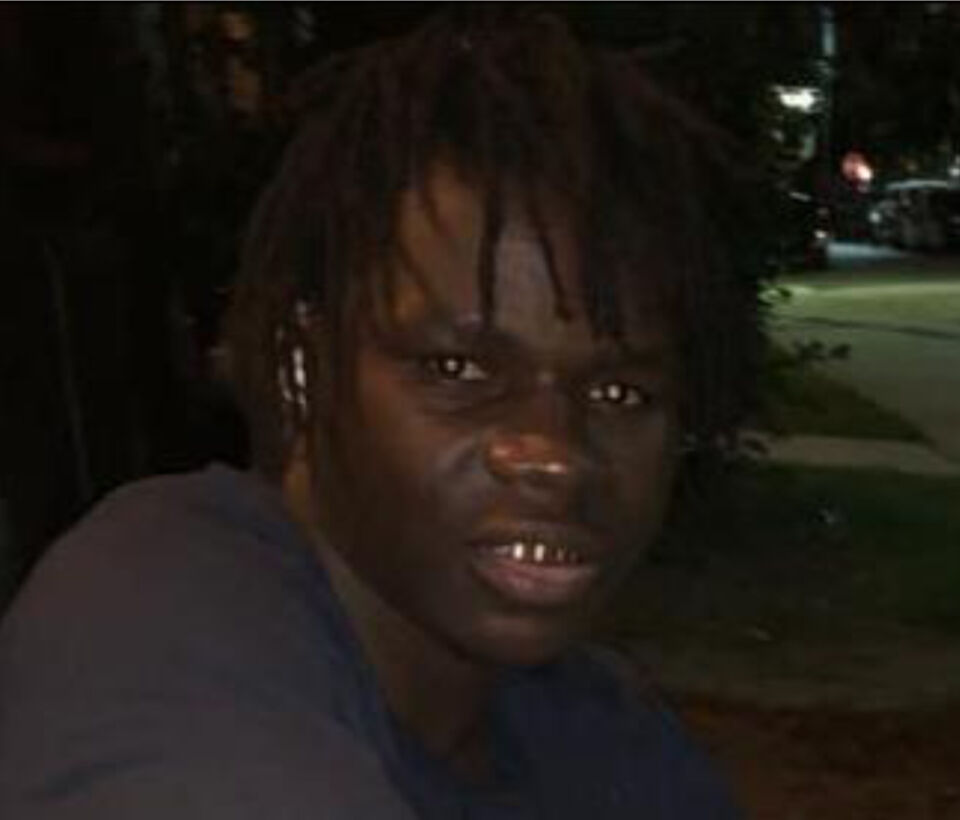 A 62-year-old homeless man is attacked in downtown Charleston the evening of Wednesday, Jan. 20, 2021. Police are investigating. Provided

Officer Lacey Chesser with the Charleston Police Department looks for clues at the intersection of Columbus and Hanover streets on Thursday, Jan. 21, 2021, a day after a 62-year-old man was beaten Wednesday night and hospitalized. Andrew J. Whitaker/Staff

The intersection of Columbus and Hanover streets in downtown Charleston is pictured Thursday, Jan. 21, 2021, after a 62-year-old man was beaten in the middle of the street Wednesday night and hospitalized. Andrew J. Whitaker/Staff

A brutal beating of a 62-year-old homeless man on Charleston’s East Side was captured on video by a resident, and police are investigating.

The footage of the Wednesday night attack was provided to The Post and Courier. It is graphic and depicts a group of men repeatedly punching the victim, who lies on the pavement. The blows are violent, their thuds heard clearly in the video.

One person stomps on the victim. Another throws an object at the victim.

At one point, one of the assailants says between blows, "I'm gonna punish you all night."

The victim has not yet been publicly identified. He remains hospitalized.

Police named a suspect in the case on Thursday night. Johnathan Romain Montgomery-Coleman, 26, is wanted on suspicion of assault and battery of a high and aggravated nature, police said.

Montgomery-Coleman is described as 5-foot-11, 200 pounds with black hair and brown eyes, police said. His last known place of residence was not available.

As the investigation continues, several residents told the newspaper Thursday that the incident is one of many that have left them frustrated and fearful.

"It's not that uncommon around here," said one East Side resident, who recorded the video. He's lived in downtown Charleston for 10 years but recently moved from the Spring Street area to the area near Hanover Street.

The man, who asked to remain anonymous for his safety, said he was walking to a corner store a little after 7 p.m. Wednesday to buy a lottery ticket. He was only inside for a few minutes, but when he came out, he saw several young men beating another man in the middle of the intersection of Hanover and Columbus streets.

It was shocking to him. He ducked out of the men's view and started filming. As more people came up to see what was going on, the attackers left, he said. About 20 minutes later, he saw police at the scene.

"I've never felt unsafe there before," he said.

A woman who said she has lived in the area a long time, said in a letter to city officials she witnessed the aftermath.

In a lengthy email sent to police officials, Mayor John Tecklenburg and East Side residents, the woman, who asked her name be withheld due to possible retaliation, said she is disturbed by the brutal, brazen crime and that Wednesday night's beating is the latest sign that something is seriously wrong in the community.

"Hopefully the reason this happened will come to light but one thing is clear — this was not a silly college student walking home at 2 in the morning drunk and putting them self at risk — this was a very violent incident at the time of day when we're all coming home from work, tourists are walking to dinner, and kids are still out," the woman wrote. "The fact that it happened publicly on well traversed Columbus Street is even more concerning."

Phelipe Hurt, another neighborhood resident, said he witnessed the end of the assault and described violence in the community as coming in cycles.

"It just seems like it's the same thing every year," Hurt said.

According to an incident report, officers arrived about 7:30 p.m. after a 911 caller said he drove past a corner store on Columbus Street and saw the victim on the ground in front of the store. He pulled over and tried to help the man until emergency medical services arrived.

How South Carolina cops, prosecutors are seeking to end a revolving door of repeat violent offenders

The victim appeared to be "heavily intoxicated," EMS told police. He had a scrape on his head and a bloody mouth, the officer noted in the report.

Surveillance footage showed two men in their 20s dragging the victim from the street and leaving him in front of the store, the report said. Then, the men left.

Police are searching for suspects.

"The detectives are vigorously investigating this case to bring the suspect/suspects to justice," police spokesman Charles Francis said in an email.

On Thursday afternoon, the intersection of Hanover and Columbus streets was quiet. A Charleston police investigator was on the scene.

Post and Courier reporters asked several residents whether they’d seen or heard anything about the beating. None said they did.