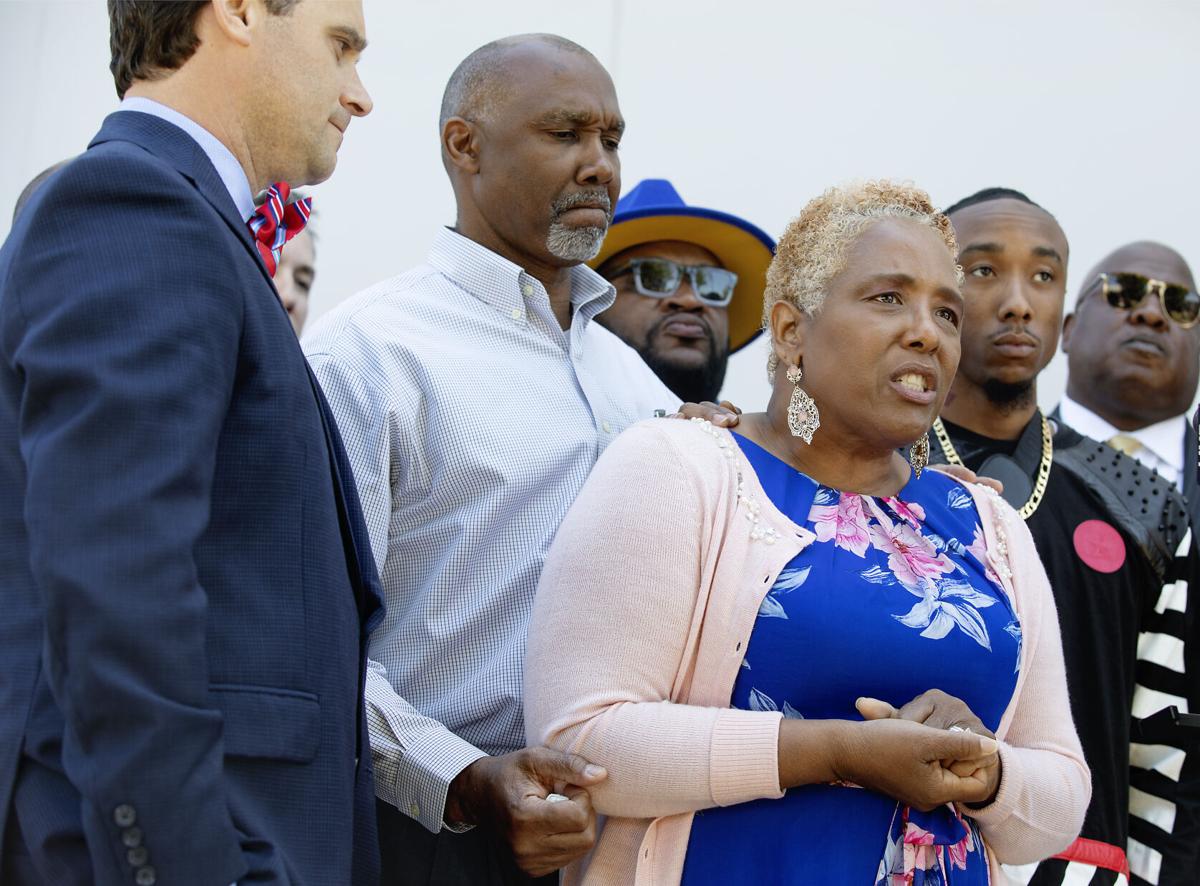 Attorney Mark Peper joins the family of Jamal Sutherland — including his father James Sutherland, mother Amy Sutherland and brother Jamar Sutherland — outside the Charleston County jail on Friday, May 14, 2021, to speak about his death after the release of body camera footage. Grace Beahm Alford/Staff 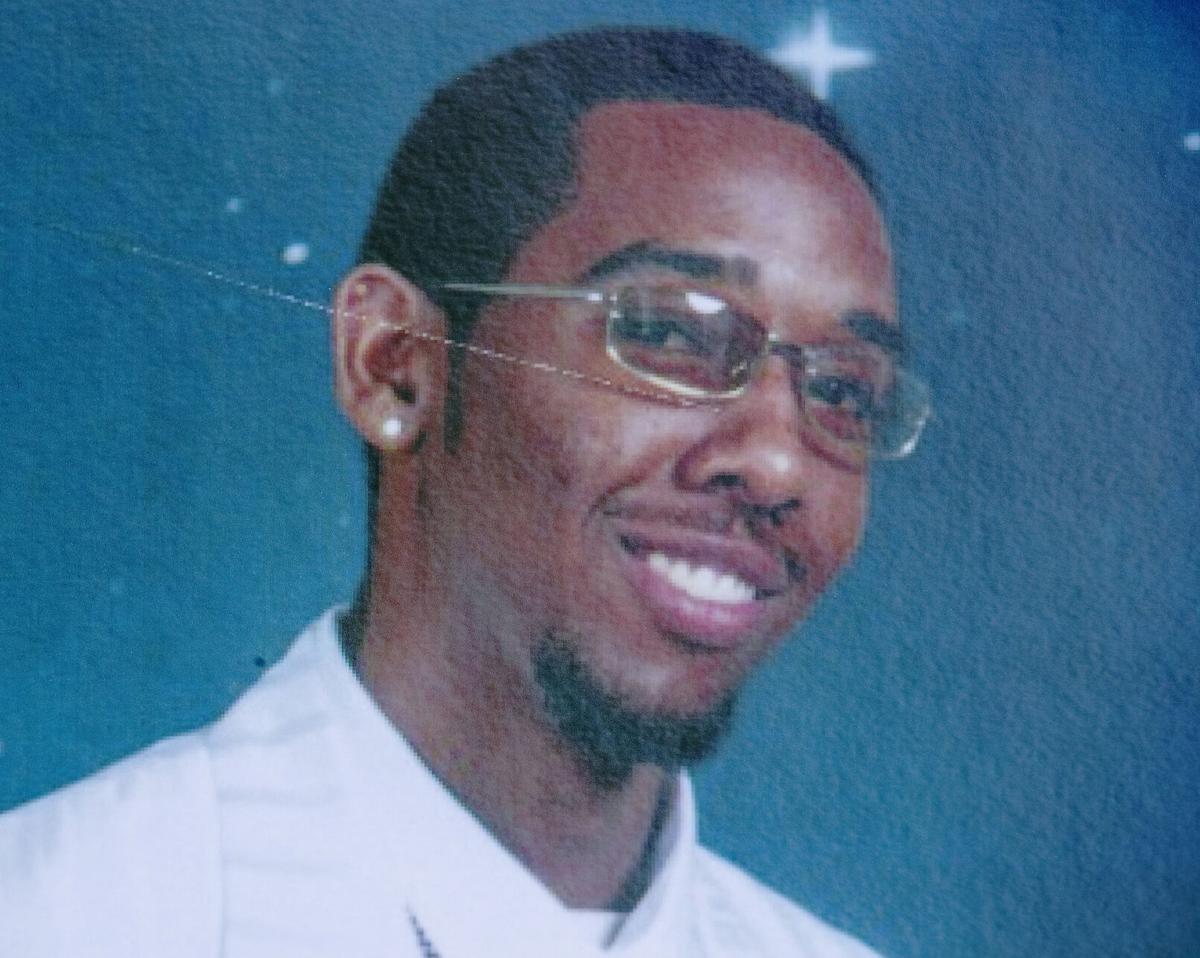 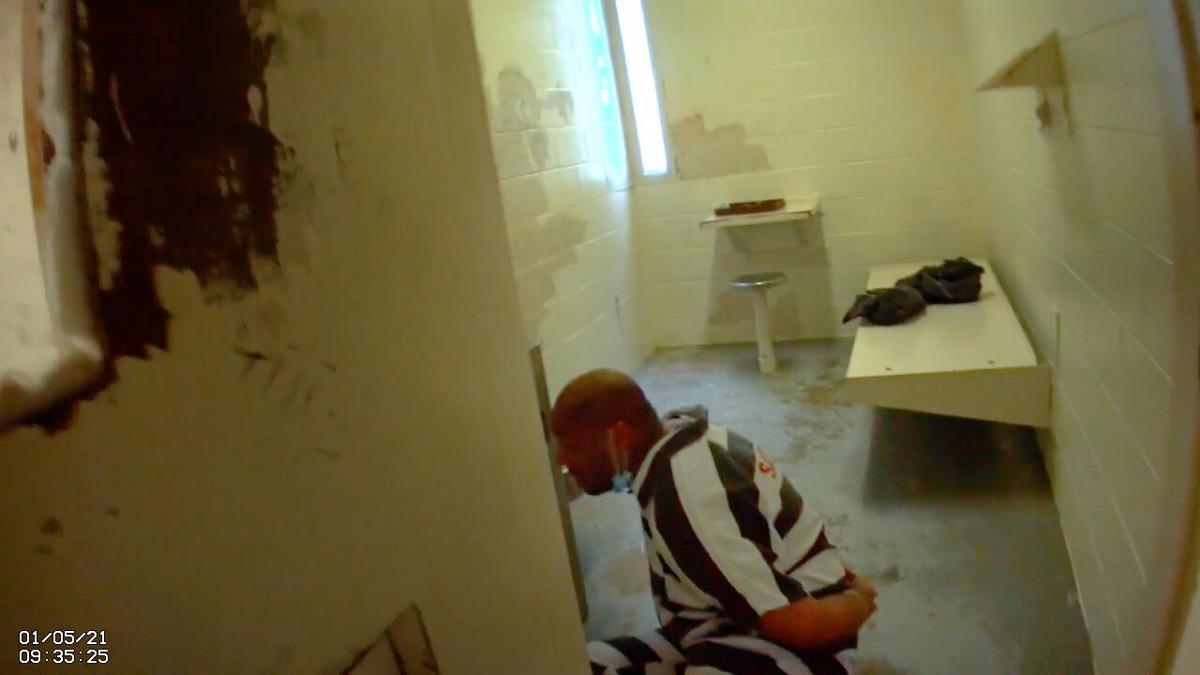 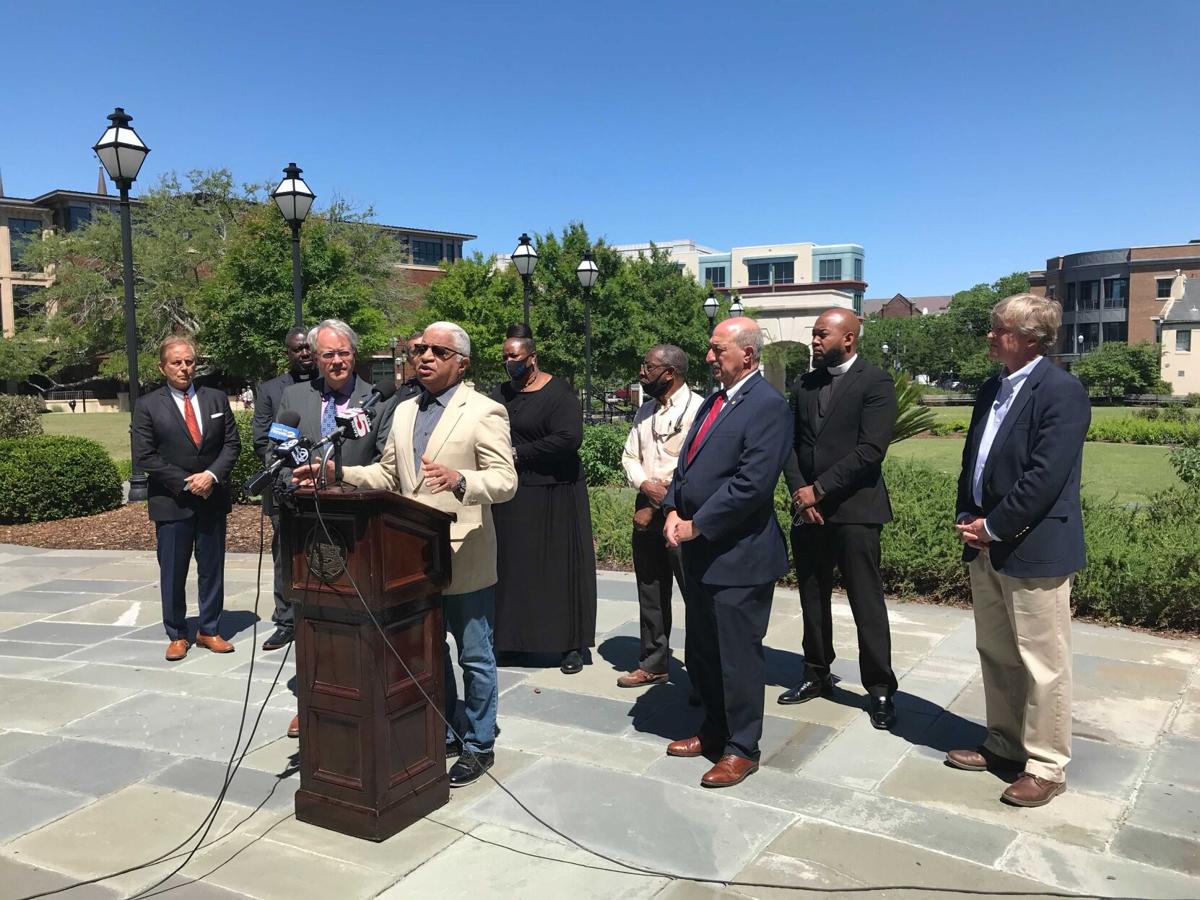 Members of the clergy and city officials on May 14, 2021, discuss the death of Jamal Sutherland in the Charleston County jail and the videos of his death released by Sheriff Kristin Graziano the night before. Sutherland died in jail custody on Jan. 5, 2021. Adam Parker/Staff 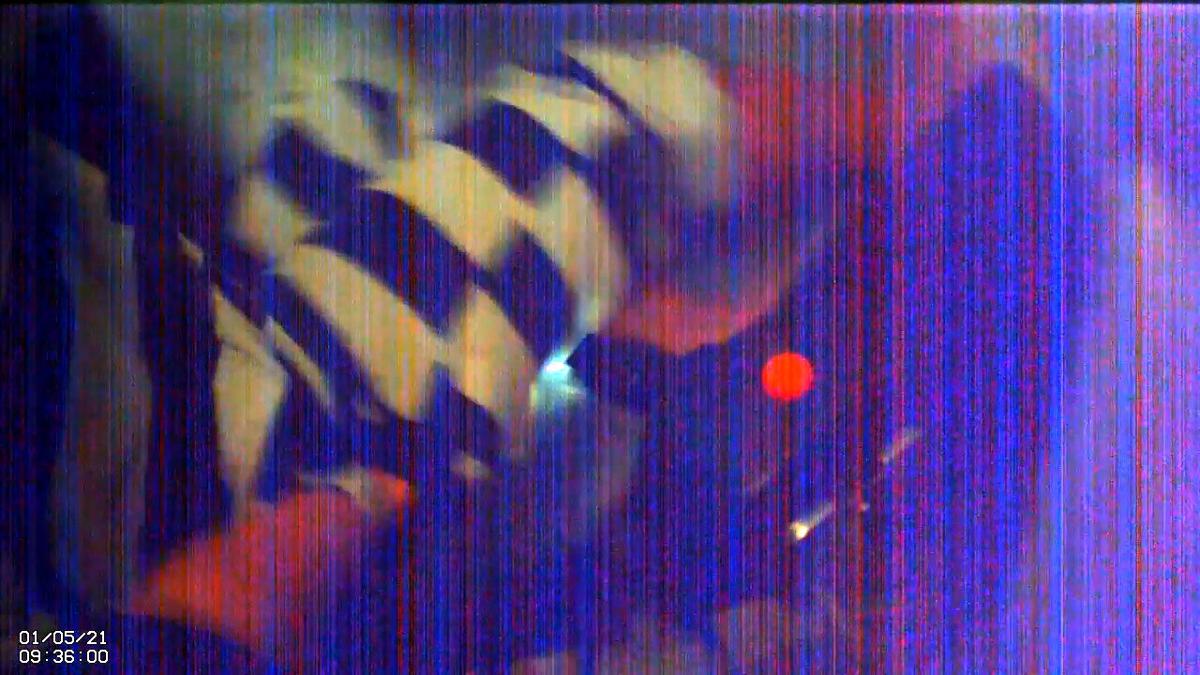 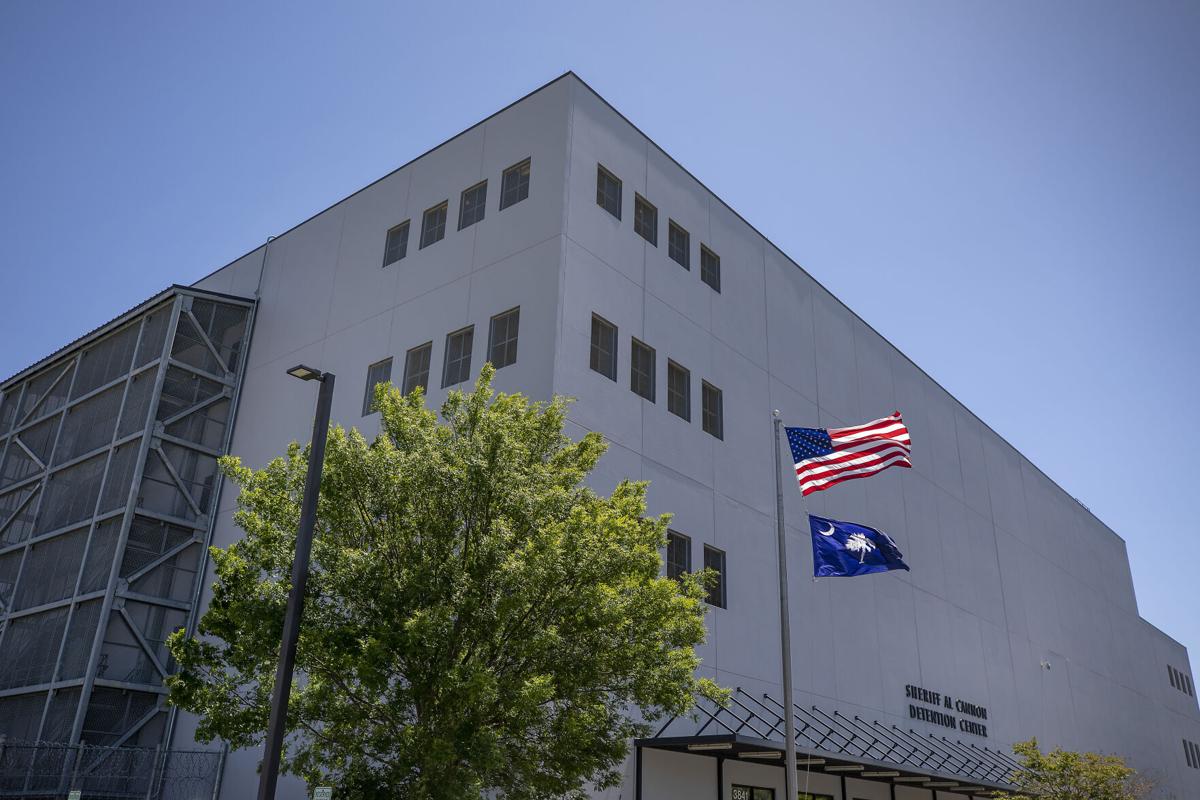 Attorney Mark Peper joins the family of Jamal Sutherland — including his father James Sutherland, mother Amy Sutherland and brother Jamar Sutherland — outside the Charleston County jail on Friday, May 14, 2021, to speak about his death after the release of body camera footage. Grace Beahm Alford/Staff

Clergy and elected officials voiced outrage yet urged calm a day after the late-night release by the Charleston County Sheriff's Office of dozens of videos showing in graphic detail the final moments of Jamal Sutherland's life.

The look into the 31-year-old's January death at the county jail raised serious questions about how people with mental illnesses are treated by police, advocates and officials said. Release of the videos late May 13 came after several days of ratcheting tensions over an investigation that spanned months and left lingering questions over how and why Sutherland died.

The videos drew parallels to the death of George Floyd, a Minneapolis man killed in police custody last year. Like Floyd, Sutherland was also Black. In both instances, a law enforcement officer had a knee on the men's bodies while each stated: "I can't breathe."

Speaking outside the Sheriff's Office on May 14, Sutherland's mother said her second of three children was a man of God who should have been treated better.

"Mental illness doesn't give anybody the right to put their hands on my child. That's my child. I loved my child," Amy Sutherland said.

"Remember, he is a human being. He is not an animal," she added. "He was treated like one, but that's not who he was."

Sutherland's death remains under investigation. The newly released videos show that deputies shocked him with a stun gun as they tried to get him out from a cell to attend his bond hearing.

The county coroner attributed Sutherland's demise to an “excited state” with adverse effects of prescription drugs as deputies tried to subdue him. His manner of death remains undetermined and under investigation, according to the coroner.

Sutherland died a day after Sheriff Kristin Graziano was sworn into the role. In a separate news conference on May 14, she acknowledged that the videos her office released were horrific.

The two deputies involved, Lindsay Fickett and Brian Houle, are still employed with the Sheriff's Office. They have been reassigned to desk duty and an internal investigation is ongoing, which could determine their future with the agency.

Ninth Circuit Solicitor Scarlett Wilson has said she expects to make a decision on whether to file charges by the end of June.

In the meantime, Graziano said the Sheriff's Office would review what occurred and develop policies on how to better care for inmates with mental health conditions.

At another news conference earlier in the day, the Rev. Matthew Rivers of Charleston's St. John’s Chapel called for progress on a communitywide debate about injustice and mistreatment to address police brutality.

“We want to tell Black Lives Matter we are here with you, we want you to know your voice matters,” he said, challenging local clergy to get involved in the dialogue.

“We want justice, we want to say the name Jamal Sutherland," Luther Reynolds, Charleston's police chief, said at the same press conference. "We want this to get the attention it deserves,” he added, while also calling for civility and cooperation.

The newly released video included body camera footage that captured deputies as they entered Sutherland's cell to take him to a bond hearing. It was the morning of Jan. 5 and Sutherland had been at the jail for roughly 14 hours.

Sutherland ignored repeated commands that he drop to his knees while inside his cell. After using pepper spray, deputies Houle and Fickett ordered Sutherland to get onto his stomach.

Sutherland had been jailed after fighting broke out at Palmetto Lowcountry Behavioral Health, a mental-health facility. Days earlier, he heard voices and became paranoid. Sutherland was diagnosed with bipolar disorder and schizophrenia as a teenager and lived with his parents in Goose Creek.

Sutherland and another patient from the center were arrested after the fight, accused of third-degree assault and battery, a misdemeanor, and taken to the jail.

Inside the cell the next day, deputies told him to stop resisting their efforts to get him in handcuffs. At one point, Sutherland was heard saying: "I'm not resisting, officer."

As he was handcuffed, Houle had his knee on Sutherland's back and remained there for over 2 minutes.

When deputies eventually lifted the man out of his cell, he was visibly limp and unresponsive, his head slumped onto his shoulders.

CPR was then performed on Sutherland, both by hand and with the assistance of a mechanical device known as a "thumper" which provides chest compressions. Medical staff also responded to examine Sutherland, who continued to appear unresponsive.

A video recorded Houle, the deputy, saying Sutherland got hit with a stun gun "probably about six to eight times at least."

Pressure had been mounting on Graziano, the sheriff, to release the videos showing Sutherland's final moments despite fears that it could spark protests in response.

In a statement when she released the videos after 10 p.m. May 13, Graziano said she had waited to do so in deference to Sutherland's family.

But the time was right to make them public, she said.

"I will continue to make myself available to the Sutherland family and offer my sincere condolences," Graziano said in the statement. "I must respect the integrity of the ongoing investigations to ensure justice is served, and therefore I will not be commenting on specific aspects of the video."

Deputies used their stun guns to subdue Sutherland even before he showed signs of aggressive resistance. That goes against guidelines published by the International Association of Chiefs of Police.

Stun guns should not be used by more than one deputy, only be deployed on people actively resisting or showing aggression who also are at risk of harming themselves or others, according to the guidelines.

Axon, the company that makes Tasers, a brand of stun gun, specifically calls for law enforcement officers to not use them on people with mental health conditions.

While stun guns are meant to not kill a person, that is not always the case.

The news agency Reuters documented more than 1,000 incidences in the United States in which people died after police stunned them, specifically with a Taser.

Dr. Justin Norris, an emergency care physician at Roper St. Francis Healthcare, said the electrical pulse from a stun gun causes short, sustained muscle contractions which can cause more serious reactions if the person has a certain medical conditions or is using drugs or prescriptions.

A statement from a coalition of activist groups called Sutherland’s death “an egregious lack of regard for the human rights of mental health patients," especially those in custody.

“Jamal’s death speaks to the inefficacy of police training to handle mental health crises and how their presence further escalates an already delicate situation,” the group’s statement said.

Sutherland’s death was similar to one at a state Department of Mental Health facility in 2019.

There, longtime patient William Avant suffocated at the bottom of a dogpile of caregivers who were attempting to restrain him, The State newspaper reported in 2019.

Employees pinned Avant face down and lay across his back for 4 minutes, preventing the patient's diaphragm from expanding to take in air. Their actions broke from the mental health agency's employee training, which stresses patients should only be physically restrained when absolutely necessary, and never face down. The department's training manual, in all capital letters, demands employees never lie across the patient's head, neck, back or chest as doing so might "interfere with their breathing."

Avant’s family sued the agency and later agreed to a $1.95 million settlement.

Sutherland's parents have not yet filed a lawsuit related to their son's treatment in the jail. But they are represented by an attorney.

Around noon May 14, Amy Sutherland stood alongside her husband, James, and another of their sons in front of the hulking concrete jail in North Charleston.

She pleaded for calm and prayed for justice, while urging that the videos of her son's final moments not lead to violence.

If you are on the Post and Courier mobile app and trying to view the video, click here.

What SC leaders are saying