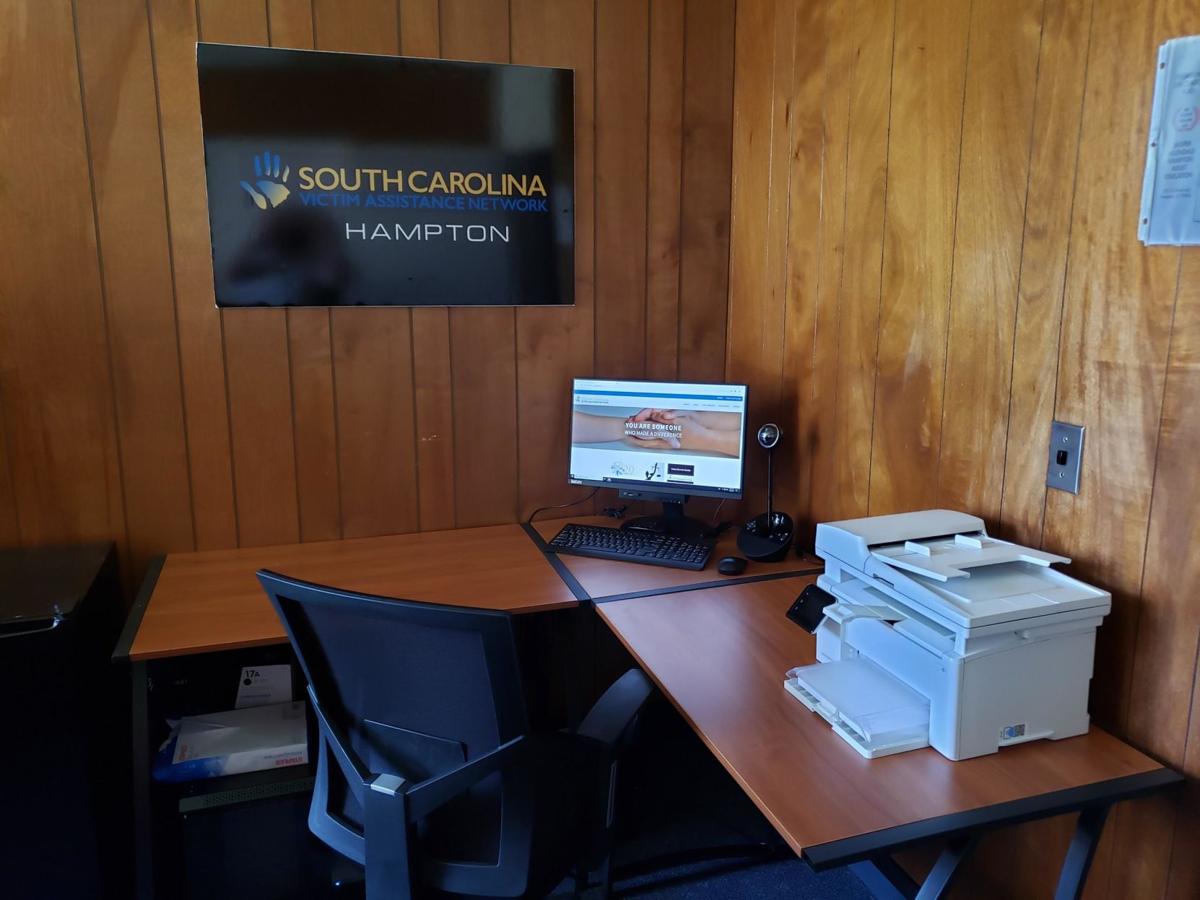 Client centers in seven rural South Carolina counties have access to a computer with video conferencing technology, a printer, scanner and copier. Provided 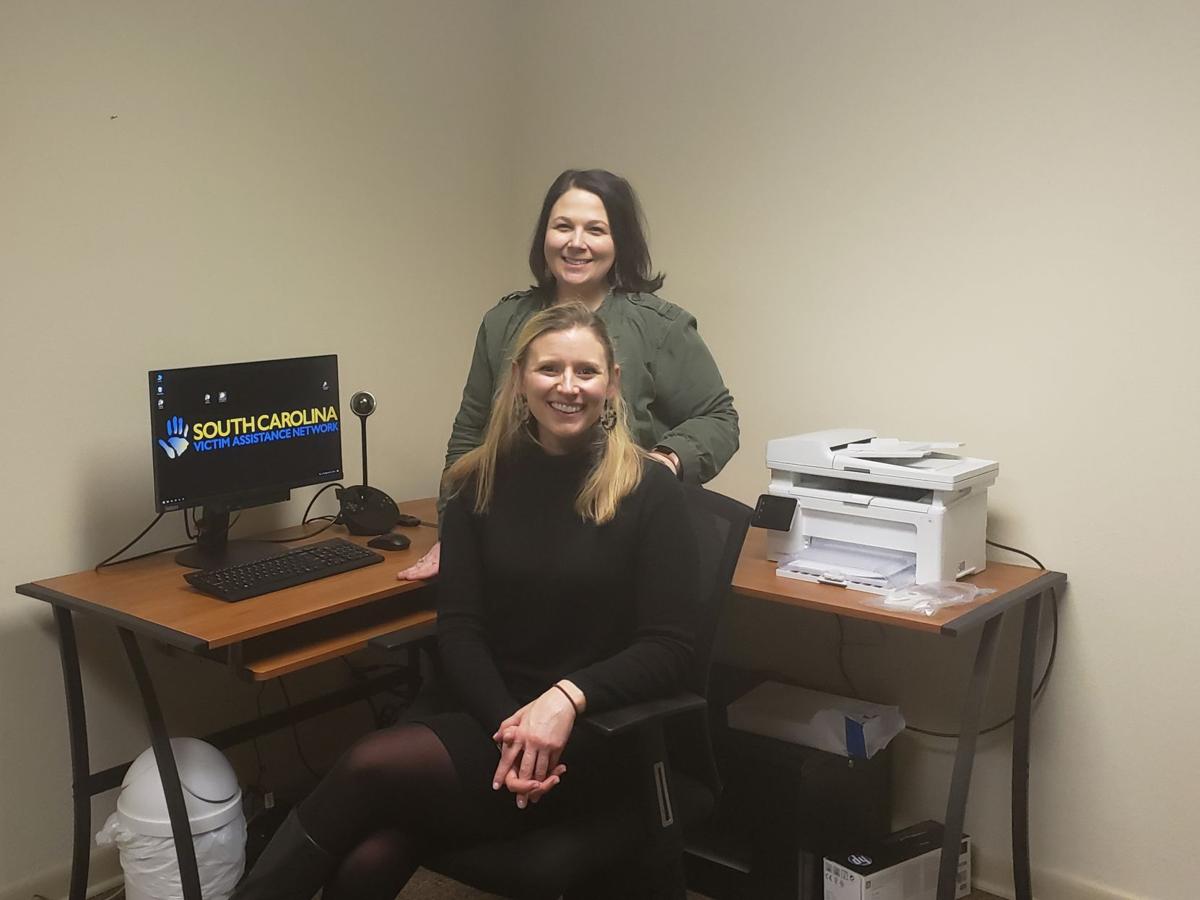 Sarah Ford (standing) and Katie Coleman (seated) are pictured on Feb. 27 at the opening of the first rural client center in Barnwell. Provided

After joining the South Carolina Victim Assistance Network as its legal director in 2017, Sarah Ford began noticing a recurring problem.

Crime victims in the rural parts of the state often struggled to reach and afford what few legal services exist near them.

“They’re notoriously expensive,” Ford said. “It’s ridiculous the amount of money people have to pay just to make sure that they’re OK. It shouldn’t be that way.”

So Ford and Katie Coleman, a senior staff attorney at SCVAN, sat down to brainstorm how their organization could best help victims of violent crimes in areas of South Carolina that have been traditionally underserved and underprivileged.

The biggest gap, they said, came from a lack of access to proper technology. So many victims not only struggled to find an affordable lawyer but also had no way to communicate with them.

Then they found a grant through the National Crime Victim Law Institute that emphasized using technology to reach crime victims — and the newest SCVAN program, Reaching Rural, began to take shape.

The program allows any victim of a violent crime to use SCVAN services free of charge, including its legal team of seven attorneys and five support staff members.

Ford said it was important to use what technology victims already had — namely, smartphones — to better reach them. Using video conference technology rather than regular phone calls is at the crux of Reaching Rural’s new effort.

“When you’re looking at someone and you say, ‘I’m your lawyer, I represent you,’ then they know my face,” she said. “I might not be right there in the room with them, but they can pick me out of a crowd. They can see me when I meet them at the courthouse or whatever it is we’re going to do. They know, ‘That’s my lawyer.'”

SCVAN clients could not be interviewed for this piece due to privacy concerns.

The centers are equipped with computers, copiers, scanners and video cameras so victims can speak and work with the network's lawyers. The organization also is developing a website where pro bono attorneys can volunteer to help rural crime victims.

“It’s a really unique way of trying to reach crime victims of people who would not normally be able to meet an attorney,” Ford said. “It gives them some confidence and some control in often very uncontrolled situations.”

Though Reaching Rural is not quite one year into its grant, the results are already beyond what Ford and Coleman expected. The service is averaging as many as 15 inquiries a week on a myriad of issues in what Coleman said is still a developing area of law in victims rights.

“There’s a lot of intersectionality in the different types of law that go into the pot of how we can help victims on multiple levels, not just on upright-facing, obvious issues,” she said. “It’s really exciting to be operating a little bit in a Petri dish.”

So far, Reaching Rural has connected SCVAN attorneys with clients they simply wouldn’t have been able to help otherwise. In one instance, they were able to have an initial video conference with a client and be in the courtroom with that client the next morning.

In another, they were connected with a case in Orangeburg where three high school students accused a classmate of sexual violence.

“Victims get very emotional in a positive way that they now have this kind of voice. That they have the buy-in, they have an attorney, they feel more empowered,” Coleman said. “It’s very difficult to come forward and talk to a lawyer about any kind of problem because it’s very private and you feel vulnerable.”

Though Reaching Rural is still a pilot phase, Ford said she hopes it eventually is expanded throughout South Carolina and beyond.

“Something that was an idea a year and a half, two years ago, that we barely had any idea, ‘Is this even possible?’ And then seeing it in action ... and go from an idea to a phone call to us in court with them the next day, it’s really powerful,” she said. “We’re blessed to do it.”

Teen wants new cooking gear so she can practice her passion

Mandy is 17 and lives with her mother in a single-parent household. Mandy, an only child, has taught herself how to cook and loves to do so for her mother because she sees how hard she works at a local gas station. Read moreTeen wants new cooking gear so she can practice her passion

Most S.C. districts aren’t targeting their relief money at certain groups of historically disadvantaged students. A program at Beaufort that is could be a model for others. Read moreHow much pandemic relief money reaches SC's neediest students remains unclear