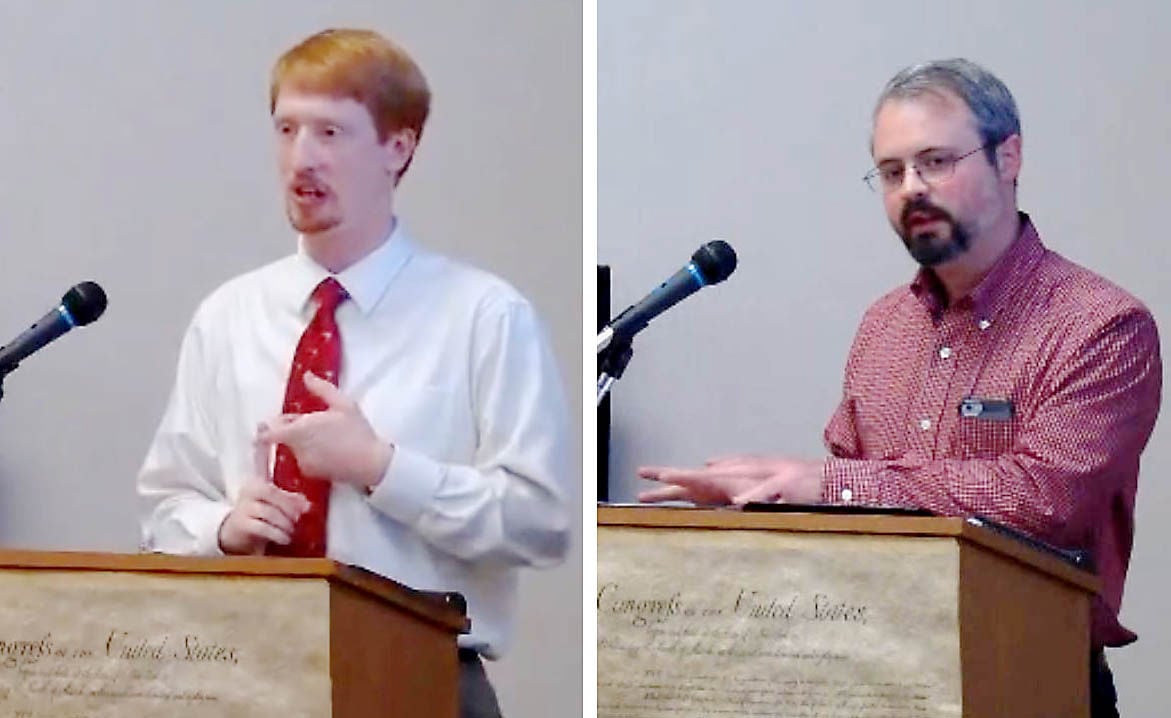 Rep. Josiah Magnuson, R-Campobello (left), and Rep. Jonathon Hill, R-Townville, appear in videos on YouTube speaking about the Virtue Solution Project, their group with a "community preparedness center" in Magnuson's hometown where community members will be able to come for spiritual support and survivalist training. Via YouTube

COLUMBIA — For those concerned about societal collapse or impending disaster, two South Carolina lawmakers have a plan. It includes community ammo depots and tactical weapons training.

State Reps. Josiah Magnuson, R-Campobello, and Jonathon Hill, R-Townville — both from tiny towns in the Upstate Bible Belt— are in the process of setting up what they call the “Virtue Solution Project,” a group that is seeking to either save America or survive a societal collapse, which they both believe is likely coming.

The organization is a mixture of religious ministry, grassroots political organizing and disaster prepping. At its core, their movement hopes to save the country by reshaping it to their interpretation of the Founding Fathers' ideals.

They are advocating that their followers, and offshoot groups, form their own communities that will no longer have to rely on corporate America or the “tyrannical” federal government. They are encouraging neighbors to support “principled men” — such as themselves — who are willing to nullify laws and court rulings they don’t agree with, like abortion, gay marriage, gun restrictions and federal standards for driver's licenses.

For their members who are not in political office, they advocate doing their part by finding their way onto juries in order to acquit people charged with crimes they personally believe are “unjust.”

If that doesn’t work, they will have “community preparedness centers," where there will be access to “reading material, tools, food storage, ammo, and more.”

The centers will be there when the economy collapses, a natural disaster occurs, a foreign nation attacks, the federal debt dooms the country or an electromagnetic pulse wipes out the nation’s infrastructure. All are scenarios they have considered.

It’s also at these “micro hubs” that neighbors and fellow members of their “militia” will be able to learn about spiritual leadership, first aid, farming techniques, renewable energy sources, and setting up “perimeters” and other “tactical defense” strategies.

“There’s probably going to be a lot of little crises, but there will eventually come a point where there is a major disaster of some sort in our country, in all likelihood,” Magnuson said during one of the lectures he gave in the past year and downloaded onto YouTube.

“We need to be ready for that, and that will give us an opportunity to have a fresh beginning.”

'Islands of refuge' being established

Magnuson, 25, was first elected last year. He is already in the process of developing one of these so-called “lighthouses” or “islands of refuge” near Campabello on a roughly 1-acre tract of land just off U.S. Highway 176. He says the handful of other people involved at this point are planning other groups near Pickens, Simpsonville, Charleston and across the border in Georgia.

According to documents published by the group online, their long-term goal is to “train and equip one million neighborhood leaders” that are willing to “build a fresh beginning for America.”

Magnuson said his center in Campobello — an old barn that was purchased by an LLC he set up late last year — will start out as a coffee shop, but will hopefully grow into the vision that he and Hill have developed.

“It’s serving two purposes,” Magnuson told The Post and Courier. “As we build that strength, it prevents doomsday, and on the other hand, if we don’t succeed, then this provides, like, lifeboats.

“I think all Christians understand that there is a prophetic element to this, living in the end times and so forth,” he said.

Some aspects of their proposal resembles militia groups in the Western United States. Other material produced by the state lawmakers looks like that of Christian nationalist groups.

“The way I would describe this group is the John Birch Society meets prepper-culture, combined with a kind of Christian restorationist sensibility and expressed in a business PowerPoint kind of way,” said David Sehat, a history professor at Georgia State University.

“That seems to me to sum up the group, which is super weird, also super interesting and super disturbing in some ways.”

But the oddest part of the entire group, several academics said, is that it is founded by two elected officials, in this case serving in the high halls of the state Legislature.

Not a threat, they say

Hill, 32, said people shouldn’t read too much into the group’s material because they are only in the infant stages of developing their ideas. The point, he said, is not to scare people, it’s about self-sufficiency and providing for your neighbors.

During the early gatherings of the group that have been posted on Youtube, Magnuson made it clear he is not advocating for an armed insurrection.

“We’re not saying that everybody should go and pick up guns and go have a revolution,” he said.

According to their campaign websites, both Hill and Magnuson were home-schooled, and both grew up with fathers who were pastors.

Hill is now a self-taught webpage developer, according to his campaign website. He ran the Anderson Tea Party from 2009 to 2012 and was elected to office in 2014.

Magnuson was just elected during the recent 2016 election, and studied for two years with Oak Brook College of Law, a school for “aspiring Christian attorneys.”

The first-term lawmaker was also the founder of several Christian groups when he was younger, including the Young Christian Leaders' Alliance, for which he drafted a constitution.

Magnuson also operated a blog where he shared photos of trips to the Creation Museum in Petersburg, Ky. He warned his followers about big businesses like Lockheed Martin, General Motors and Wal-Mart, which he said was “encouraging the progress of the coming union of Canada, the United States, and Mexico.”

Magnuson and Hill see their “virtuous” communities as the answer to government overreach.

Part of their solution is to limit the need for government by having the people in their select communities and churches provide social services instead of the government.

In one of his lectures, Hill raises the question of any government role in public education.

“There’s nothing wrong with education,” he said. “We can talk about whether it’s government’s role to fund that or control that.”

His idea of public education is a one-room schoolhouse where parents choose the teacher.

“That’s the way it worked back in the day,” he said. “And then we got away from that and now we basically have career politicians and bureaucrats on a school board that are running things. It’s no longer the parents.”

Other members of their group took that anti-government sentiment further. Patricia Wheat, a speaker who took part in their lectures on more than one occasion, raised questions about the legitimacy of state and local police.

“However, militia have authority under the Constitution of the United States, of the State of South Carolina and the Bible,” she continued. “Which one overrides?”

Wheat’s comments, Hill said, were the result of “like-minded people thinking out loud,” and that he and Magnuson found her comments “objectionable.”

“She would be an example of one of those individuals that goes much further towards anarchy than we are comfortable with,” Hill said.

On the group’s webpage, they link to a commercial for the Peacekeeper app, which allows people to contact their neighbors with an alert if they want them to respond to an emergency instead of police.

“This isn’t some type of political overturning movement," Magnuson said. "It’s more of a political and economic replacing movement."

Until their replacement movement takes hold, however, the two lawmakers are working to counteract the current political system in the House of Representatives by trying to nullify laws they determine are unconstitutional or morally evil.

Magnuson has sponsored bills that would allow local government to enact laws mandating transgender individuals use the bathrooms that correspond with the sex on their birth certificate or would define “personhood” as a fertilized egg, effectively nullifying court decisions upholding access to abortions.

On their website, they give the example of a bill that Hill previously helped to sponsor that would prevent state employees from issuing marriage licenses to same-sex couples.

On their Facebook page, the group held up the trial of the Bundy Brothers, the armed anti-government protesters who took over a federal wildlife refuge in Oregon, as a good example of jurors refusing to convict people for laws they believe are unjust.

“Whether or not you agree with the Bundys, this is clearly a victory for the jury system, and demonstrates its power to protect courageous citizens!” they wrote.

While Magnuson and Hill explicitly advocate against calls for secession, several professors said some of their movement's language and ideas are similar to those in the former Confederacy.

Michael McVicar, a professor of religion at Florida State University who studied the South Carolina group Christian Exodus during the early 2000s said, "When you start talking about nullification, that old Confederate ideology is just percolating right under the surface."