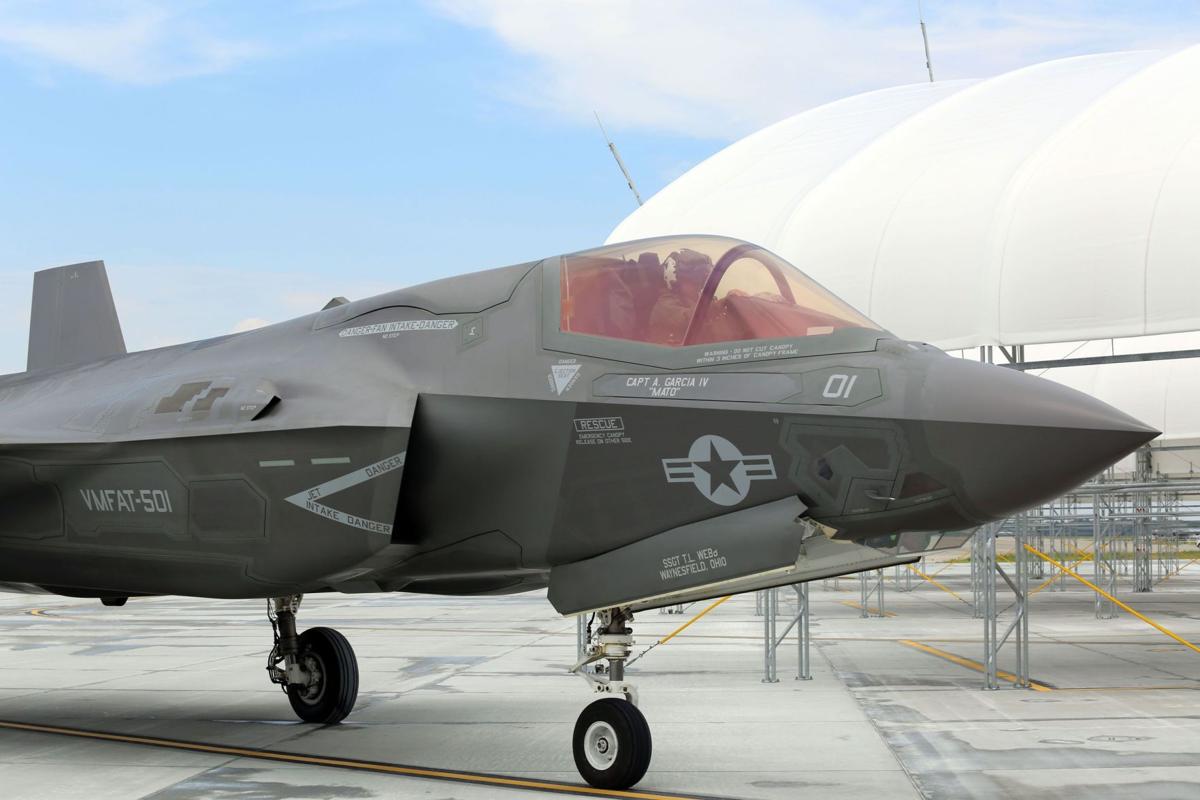 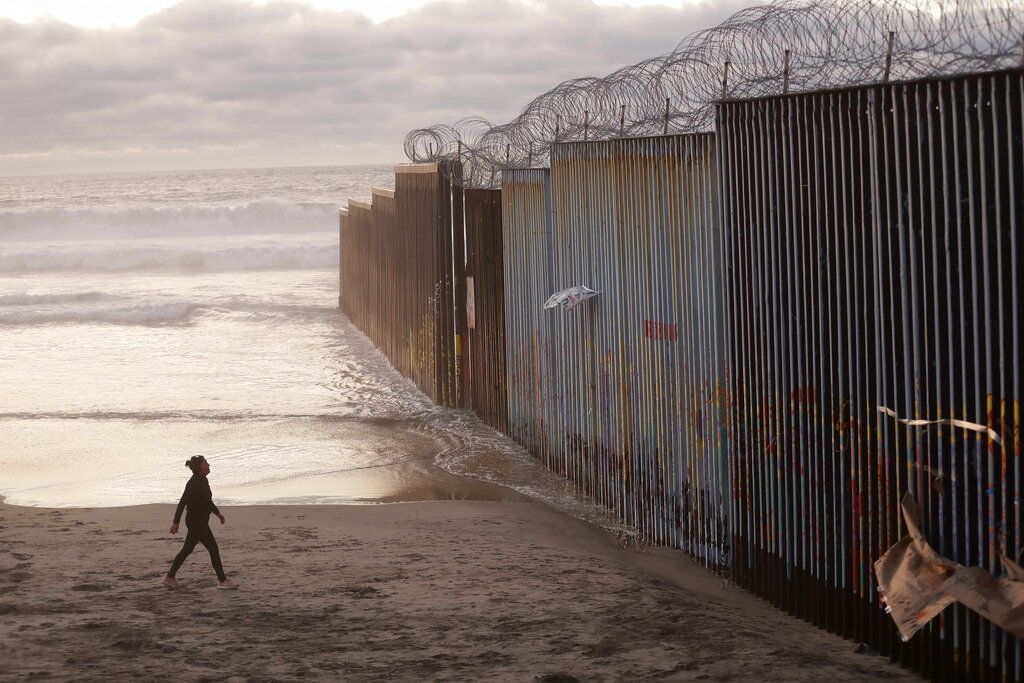 FILE - In this Jan. 9, 2019 file photo, a woman walks on the beach next to a border wall topped with razor wire in Tijuana, Mexico. The House is scheduled to vote today on a resolution to nullify the president's declaration of a national emergency, arguing there is no justification for it to fund a wall along the U.S.-Mexico border. (AP Photo/Gregory Bull, File) 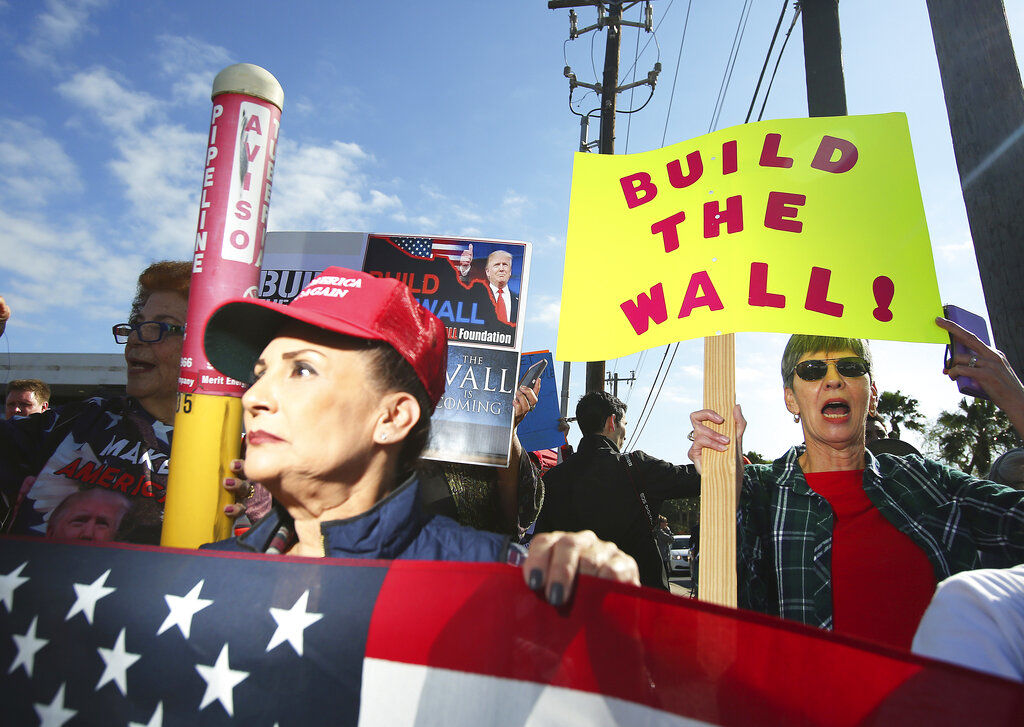 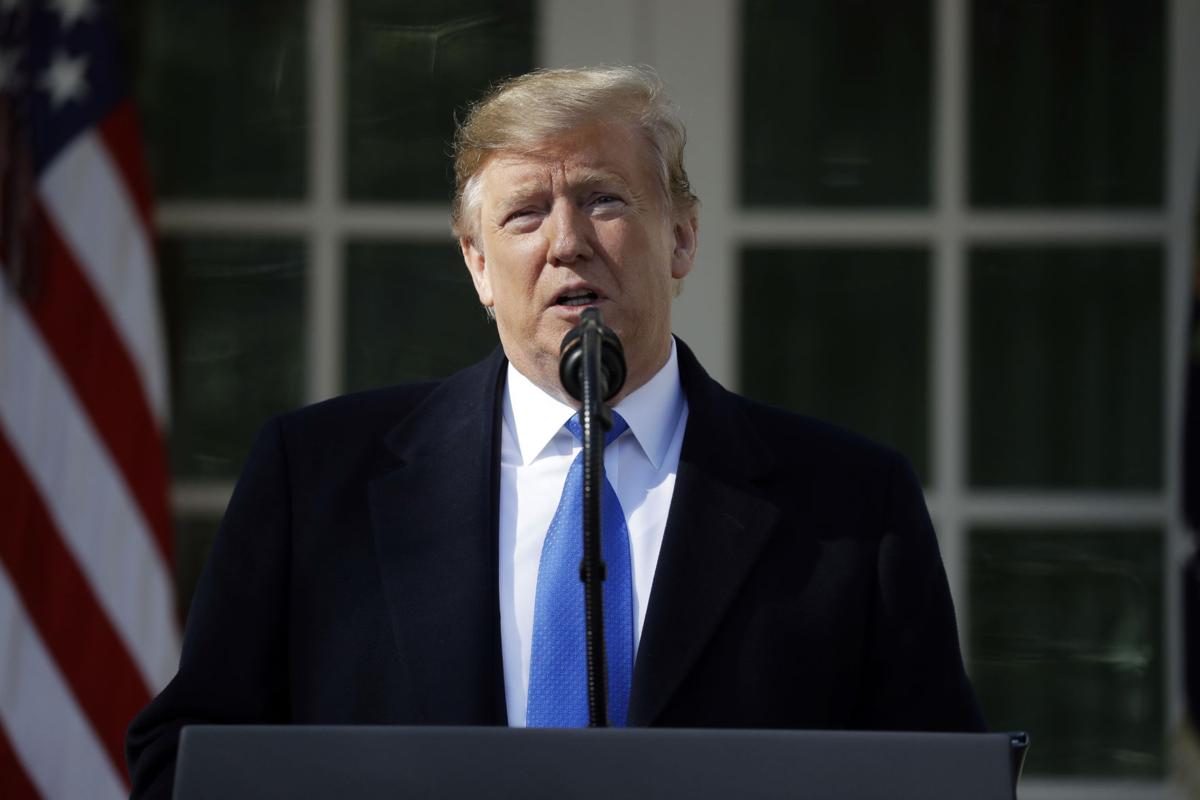 President Donald Trump speaks during an event in the Rose Garden at the White House to declare a national emergency in order to build a wall along the southern border, Friday, Feb. 15, 2019, in Washington. (AP Photo/ Evan Vucci)

FILE - In this Jan. 9, 2019 file photo, a woman walks on the beach next to a border wall topped with razor wire in Tijuana, Mexico. The House is scheduled to vote today on a resolution to nullify the president's declaration of a national emergency, arguing there is no justification for it to fund a wall along the U.S.-Mexico border. (AP Photo/Gregory Bull, File)

President Donald Trump speaks during an event in the Rose Garden at the White House to declare a national emergency in order to build a wall along the southern border, Friday, Feb. 15, 2019, in Washington. (AP Photo/ Evan Vucci)

But what projects are actually at risk may be significantly smaller.

The Pentagon released a list of potential military construction funds this week that could be cut worldwide to help create the wall on the Mexico-U.S. border. It covered $291 million in projects at the Marine Corps Recruit Depot Parris Island, Shaw Air Force Base, Fort Jackson and Joint Base Charleston.

These are the South Carolina military projects that the Pentagon could be cut to pay for President Donald Trump border wall:

But there has been confusion among lawmakers and military advocates about what Palmetto State projects could be affected.

The Pentagon included several barracks on its target list but reiterated its priority is to maintain housing needs.

The agency also said only projects with an award date after Sept. 30 would be at risk. Only one South Carolina project on the Department of Defense list meets that criteria: a $10.7 million replacement for a fire station at the Marine Corps Air Station Beaufort.

A replacement for the air station's Laurel Bay Fire Station was scheduled to be awarded in April 2020, according to the Pentagon list.

Bill Bethea, chairman of the S.C. Military Base Task Force, told The Post and Courier the list was "hastily made" and received clarification from U.S. Sen. Lindsey Graham's office that the fire station was the only project that appeared most vulnerable of being cut.

Lt. Kevin Boss, a Marine air station spokesman, said the proposed list of military project cuts have not affected anything so far, including the fire station. The Laurel Bay station, built in 1967, responded to seven fires in the housing area last year and provided additional emergency assistance to local fire departments, the base said. Officials expect to award a contract for the construction of a new firehouse in 2020.

Bethea said there is a desperate need for a new fire station because it is "very old and needs to be replaced."

"We are agonizingly investigating it ourselves," Bethea said. "We're very concerned."

Kevin Bishop, a spokesman for Graham, said the Seneca Republican will pursue more funding for any South Carolina projects that face delays this year and will continue to advocate for military projects in the state until the list is finalized.

“Senator Graham will continue to support construction of walls and barriers on our southern border as well as advocating for projects important to South Carolina," Bishop told The Post and Courier. “If Democrats had chosen to supply funding to protect our border – a position which until President Trump took office had bipartisan support — none of these projects would even be in jeopardy of having their funding delayed.”

Trump declared a national emergency last month to bypass Congress after they declined funding on the border wall. Section 2808 of the U.S. Code allows for the president to allocate certain military funding to accomplish his policy objectives. Since utilizing his constitutional authority, Trump has angered many, including Charleston Democratic U.S. Rep. Joe Cunningham.

“I’ve been clear that I believe sidestepping Congress and the Constitution by declaring a state of emergency sets a dangerous precedent and using funds critical to the safety of our nation and the well-being of our armed forces undermines our national security," Cunningham said. "The president should work with Congress to ensure our borders and ports of entry are as secure as possible instead of taking money away from vital military construction projects in the Lowcountry.”

Republican U.S. Sen. Tim Scott said through his spokesman that he would also seek funding for military projects.

"Senator Scott is aware of the Section 2808 funding pool and has previously spoken with the Appropriations Committee to ensure that any project that is stalled is fully funded afterwards," spokesman Ken Farnaso said. "Both the security of all South Carolinians and everyone in our nation is top of mind and we need to make sure that it continues to be our No. 1 priority."

Running out of 'easy choices'

Overall, more than $13 billion worth of projects across the world have been identified on the Pentagon's report. While the Department of Defense said no final decisions have been made, the move is still troubling to military experts.

Brad Bowman, senior director of the nonpartisan Foundation for Defense of Democracy’s Center on Military and Political Power in Washington, D.C., said some cuts to military projects undercut America's ability to react in times of crisis.

Rick Berger, a military research fellow at the conservative-leaning American Enterprise Institute, said the Pentagon doesn't move quickly on a lot of these projects, so it will take some time before they decide what will actually need to be cut for funding. Some of the projects are simple, others are more complex.

“The Department of Defense is going to do its best to mitigate its impact," Berger said. "But you run out of easy choices really, really fast.”

The overall list is long ranging, providing for everything from waste facilities and parking lots to schools located on base and air traffic control towers.

“If a parking lot doesn’t get built, we’re all going to live," Berger said. “But there’s a ton of these middle schools, you have to pit those against F-35 maintenance facilities.”

Overall, 56 percent of current military and veterans said they approve of the job Trump is doing as president, according to AP VoteCast, a nationwide survey of midterm voters taken in 2018. By comparison, 43 percent disapproved.

Voters who had not served in the military were more likely to disapprove (58 percent) than approve (42 percent) of Trump's job performance.

Todd Shaw, chairman of the University of South Carolina's political science department, said he's unsure of how the state's military cuts, if enacted, would affect his military voting base. Overall, he said it wasn't likely.

"This president has been successful to a degree where his rhetoric has been powerful enough where people will disagree with his policy choices but still align with him politically," Shaw said.

Berger said cutting from the military to fund the border wall is a risky move by potentially pitting two major GOP voting issues, the military and the border, against each other. The move to dip into military funding may not even fully-fund the wall.

“It’s really a dumb move,” Berger said. “It’s likely not going to build a major portion of the wall and it takes a big issue from Republicans, the military ... a big Republican priority.”

Editor's Note: This story has been updated to reflect that Brad Bowman said some, not all, cuts to military projects affect military readiness.