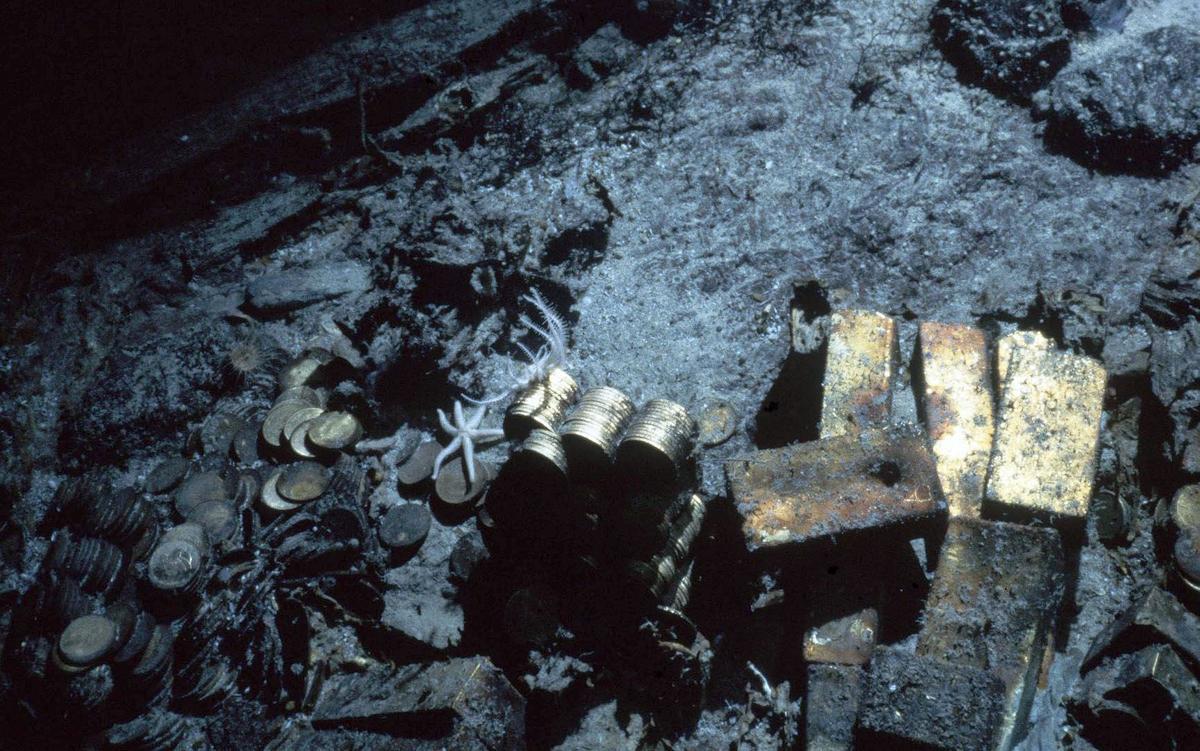 Gold bars and coins from the SS Central America are shown in 1989 littering the bottom. The mail steamship sank in a hurricane in 1857. 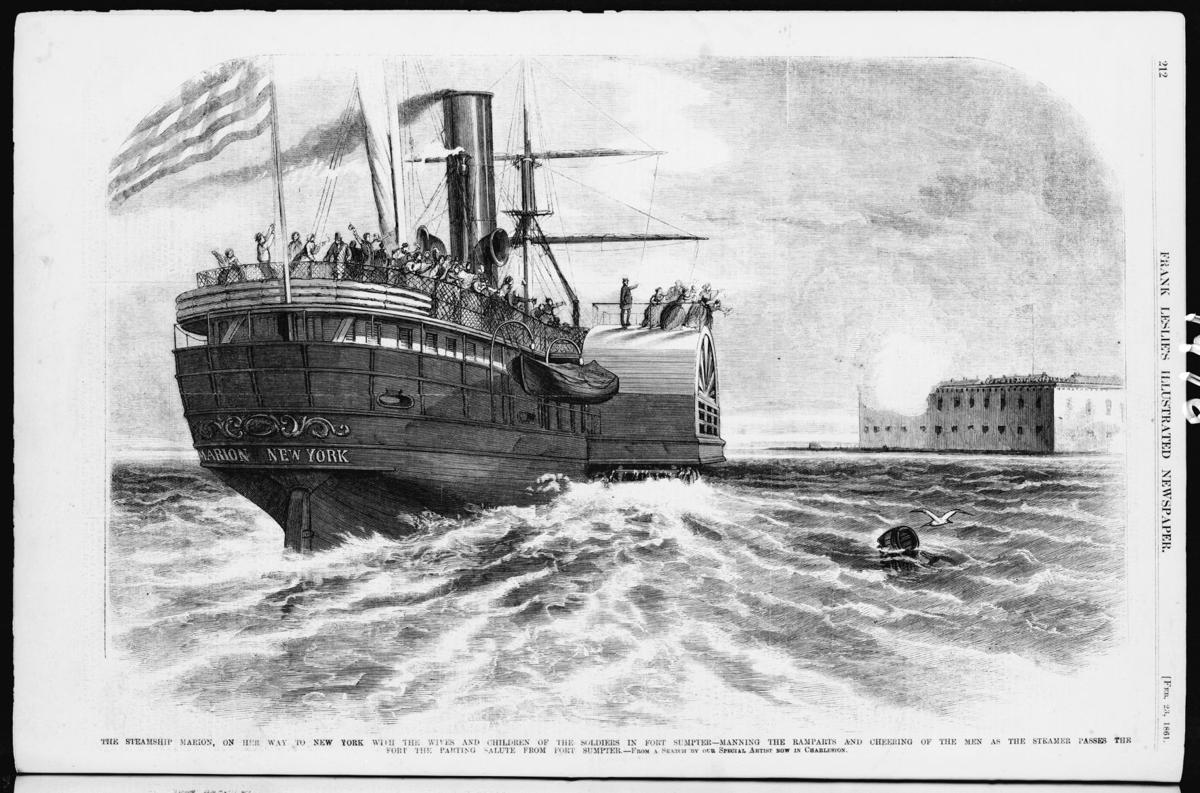 The steamship Marion (above) on her way from Charleston to New York in 1861, was a mail carrier like the S.S. North Carolina. It blew a boiler and sank. Library of Congress

MURRELLS INLET — The ship owned by the richest man in America is giving up its gold, again.

The North Carolina was a side-wheeled steam packet, a coastal transport that carried mail and was owned by Cornelius Vanderbilt. It was on its way from Wilmington, N.C., to Charleston in July 1840 with about 25 people aboard, including congressmen and their families returning from a session in Washington, D.C.

It collided with the Governor Dudley about 21 miles off Murrells Inlet and sank.

Down to the bottom went what was reported to be a large amount of gold.

The hunt for treasure is still on in South Carolina

That was true as hundreds of thousands of dollars worth of gold coins and other artifacts were scavenged from the site 20 years ago. Last month, a second treasure hunting dive team, the Florida-based Blue Water Adventures, went scouring for more.

The company published photos of a coin on its Facebook page last week, but has said little public about the salvage work.

The piece, a $10 gold piece "is pristine Mint State condition, and the finest known example. The unbroken pedigree also adds considerably to its desirability," Jeff Garrett, of Mid-American Rare Coin Gallery, told The Post and Courier. "The coin will become the center piece of an advanced collection of U.S. gold coins."

The North Carolina wreck site hasn't stayed too secret. Today, most of the wood has been eaten away by worms. But axles, sheet metal, pipes, brass and bronze spikes that held it together lie scattered in the silt on the sea floor.

Kehl Carter, of Murrells Inlet, dove the shipwreck for years before he knew what it was. In the mid-1990s when he was hired aboard the earlier salvage operation, he was scouring the bottom when his hand came across something in the silt. A gold coin.

"I held it up in the water. I swam to the other divers to show them. That's how excited I was," Cater recalled.

The coin he found would get more exciting. Its 1838 date came with a "C." It was one of 700 minted in Charlotte, N.C., from gold mined nearby in the Uwharrie Mountains.

The "C" coin was so rare it would later sell for $80,000. Those earlier salvagers came back with at least 18 coins and two gold watches.

That company, too, was so secretive that its crew didn't tell Carter what they were after until he figured it out, he said.

Carter showed the Blue Water salvage team where to dive. The coins they have found are from that site, he said.

The North Carolina is the stuff of mysterious legend.

"Commodore" Cornelius Vanderbilt, who owned both ships, established a railroad and shipping network that made the family one of the wealthiest in America for generations.

His money built Grand Central Station in New York City. His heirs built the Biltmore Estate in Asheville, the palatial manor that was the largest home in the country, which they used as a mountain lodge at a time when you could walk out the front door to hunt.

At his death in 1887, Vanderbilt's net worth was estimated to be more than $200 billion in today's dollars.

Competitors described him as shrewd, aggressive and ruthless in his approach to business, according to History.com.

"Both mail ships operated between Wilmington, N.C., and Charleston, S.C., traveling the same route in opposite directions," according to a Bureau of Ocean Energy Management survey conducted with the S.C. Maritime Research Division in 2014.

"Despite a clear, calm night and fair warning, both vessels saw the other miles away, one of the vessels deviated from protocol and Governor Dudley rammed the quarter of North Carolina," the survey said.

"Crew and passengers evacuated, and the vessel sank within 15 minutes; no lives were lost but newspapers reported the shipment of mail and personal cargo, including congressional payroll of $15,000 to $20,000, was lost."

Oddly, after the "deviated" wreck, neither Vanderbilt or his heirs filed a claim or made an effort to salvage the ship or contents, leaving it to sit and sink into 3 or 4 feet of muck.

The Fayetteville Observer at the time reported "the baggage and mail are lost and with them a large amount of gold."

The lore of lost ships and gold has drawn treasure hunters to the Carolinas for centuries. The stormy waters and perilous reefs made for countless shipwrecks across a busy trade route. Pirates roamed the deep and the islands.

At least a few of the tales are real. Two decades ago, explorer Tommy Thompson found a cache worth millions of dollars around the 19th century wreck of the Central America some 160 miles offshore South Carolina. He ended up embroiled in legal problems.

Archaeologists, historians and even medical researchers don't like unscientific scavenging at the sites, which could also reveal a trove of historic and climate information, as well as organisms that provide potential cures.

But beyond 3 miles out, the ocean is virtually open once a salvage operation has custody of the wreck. The National Oceanic and Atmospheric Administration is tracking the salvage work but doesn't have an active role, according to its legal staff.

Blue Water, and its partner organization Endurance Exploration Group, started after the shipwreck in 2018, by filing for custody of the wreck site with the U.S. Securities Exchange Commission.

"The S.S. North Carolina and the S.S. Governor Dudley were owned by the Wilmington and Raleigh Railroad Company and were used to transport passengers between railheads in Charleston, South Carolina, and Wilmington, North Carolina," the filing said.

It also noted that Vanderbilt hadn't insured either ship and didn't try to find or salvage it. The family heirs have never searched for it or "asserted any claim" to the ship, cargo or valuables.

"There could be a lot more out there, if you go by the (ship's) manifest," Carter said. But based on the fact that no claims were filed and none of the family searched for the shipwreck, he suspects it's more likely the value of the ship and lost cargo was inflated on the manifest, as a business write-off.