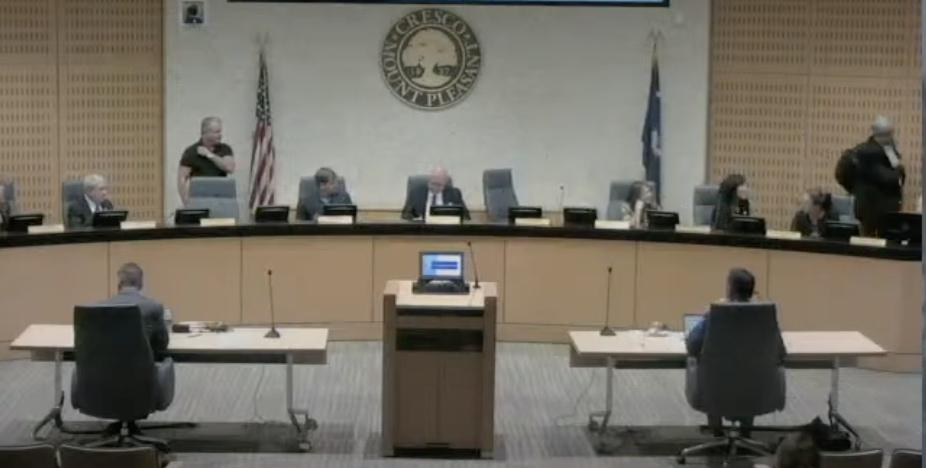 In this screenshot, Mount Pleasant Councilman Tom O'Rourke (right) abruptly leaves a Town Council meeting Tuesday, Oct. 12 2021, after a motion was made to cancel a land purchase he supported. 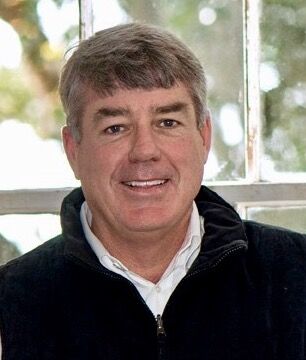 At issue is whether to cancel a previously approved contract to buy nearly 33 acres of land in the Carolina Park development between Faison Road and the Mount Pleasant Regional Airport.

Mayor Will Haynie and two councilmen, Howard Chapman and Jake Rambo, unsuccessfully tried to scrap the deal, with Chapman saying the money could be spent on drainage improvements instead.

Apparently upset by the effort, Councilman Tom O'Rourke abruptly left what would be his last council meeting, as other members of council urged him to stay. O'Rourke, who is not seeking re-election, walked out immediately after Chapman made the motion to cancel the land deal.

"I am no longer a member of council and have nothing to say about anything," he texted a Post and Courier reporter Oct. 13, declining to answer questions about the events of the meeting.

O'Rourke, the former long-time director of Charleston County Parks and Recreation, has been serving his first term on Town Council and remains a member of council until his seat is filled in the election.

Councilwoman Kathy Landing, who is running for mayor against Haynie, accused the incumbent of pulling a political stunt by trying to end the contract at the Oct. 12 council meeting.

“This is completely out of order," Landing told Haynie at one point. "And I see that smile on your face, and it’s not appropriate."

The events played out at the very end of the meeting. At the start of the meeting, several town residents had questioned the lack of transparency about the land purchase, which would consume most of the $7.5 million in American Rescue Plan Act funds the town expects from the federal government.

Haynie said it made sense to reconsider the deal because it was the last council meeting ahead of an Oct. 31 deadline when the town could still get back its deposit on the purchase.

“All we know is that we’re getting a $7.5 million windfall … and we’re going to spend $6.5 million on something we don’t have a plan for," he said. “It puts the town in the real estate business."

Town officials have said little about the purchase or what's intended there, partly because there is no specific plan.

Some council members think the property could be home to a performing arts center some day, or a senior center for the north end of town, or recreation facilities, or some combination of those things.

“Certainly, we need to get this piece of property into the town," said Councilman Gary Santos, who supports the deal and is up for re-election.

Supporters see the land as a opportunity to plan ahead because the fast-growing population in the north end of Mount Pleasant will need additional services, and the price of land in the town has been soaring.

“The problem is, we don’t know what’s going there," said Chapman. "We haven’t developed a plan.”

He countered the town has developed and vetted a plan to improve drainage and flooding, and the money could be used for that purpose.

The town's purchase involved 33 acres of a 106-acre tract and would take that portion off the property tax rolls. The undeveloped property is currently taxed as agricultural land, and the total property tax bills have amounted to less than $4,000 yearly, according to county records.

Mount Pleasant would get just under a third of that land for $6.5 million.

“This is at a deep discount to a very low appraisal value," said Landing. "We’d be purchasing this at less than $200,000 an acre."

The land is owned by Lerato LLC, which is controlled by Chris Marino, who could not be reached for comment Wednesday.

Opponents of the land purchase didn't so much question the price as they did the purpose. Rambo described it as a public-private partnership, and he said those don't work out well, citing Charleston County's involvement in the failed Naval Hospital redevelopment in North Charleston.

Muddying the water a bit, an apparently unrelated plan to construct an entertainment venue in Carolina Park involving competitive video gaming — also along Faison Road — has been in the news in recent weeks.

Landing, who has been enthusiastic about the e-sports venue, suggested some people mistakenly thought the town's land deal was a part of that.

Plans in the works for esports auditorium, content production site in Mount Pleasant

Councilwoman Guang Ming Whitley has been talking with Marino for more than two years about the town acquiring land in Carolina Park as a home to a performing arts center, among other things. In 2020, Whitley and Marino co-wrote an opinion article for The Moultrie News calling for the town to use county Greenbelt funds for a land purchase there.

“I just think the potential here is so limitless for the town," Whitley said at the Oct. 12 meeting.

Mount Pleasant doesn't have a performing arts center, or any substantial amount of money set aside to build one, although it's the fourth-largest city in the state.

In the end, the vote on the contract Oct. 12 was much like the original vote. Just three votes were cast against the contract, so the deal moves forward with many questions left to be answered.