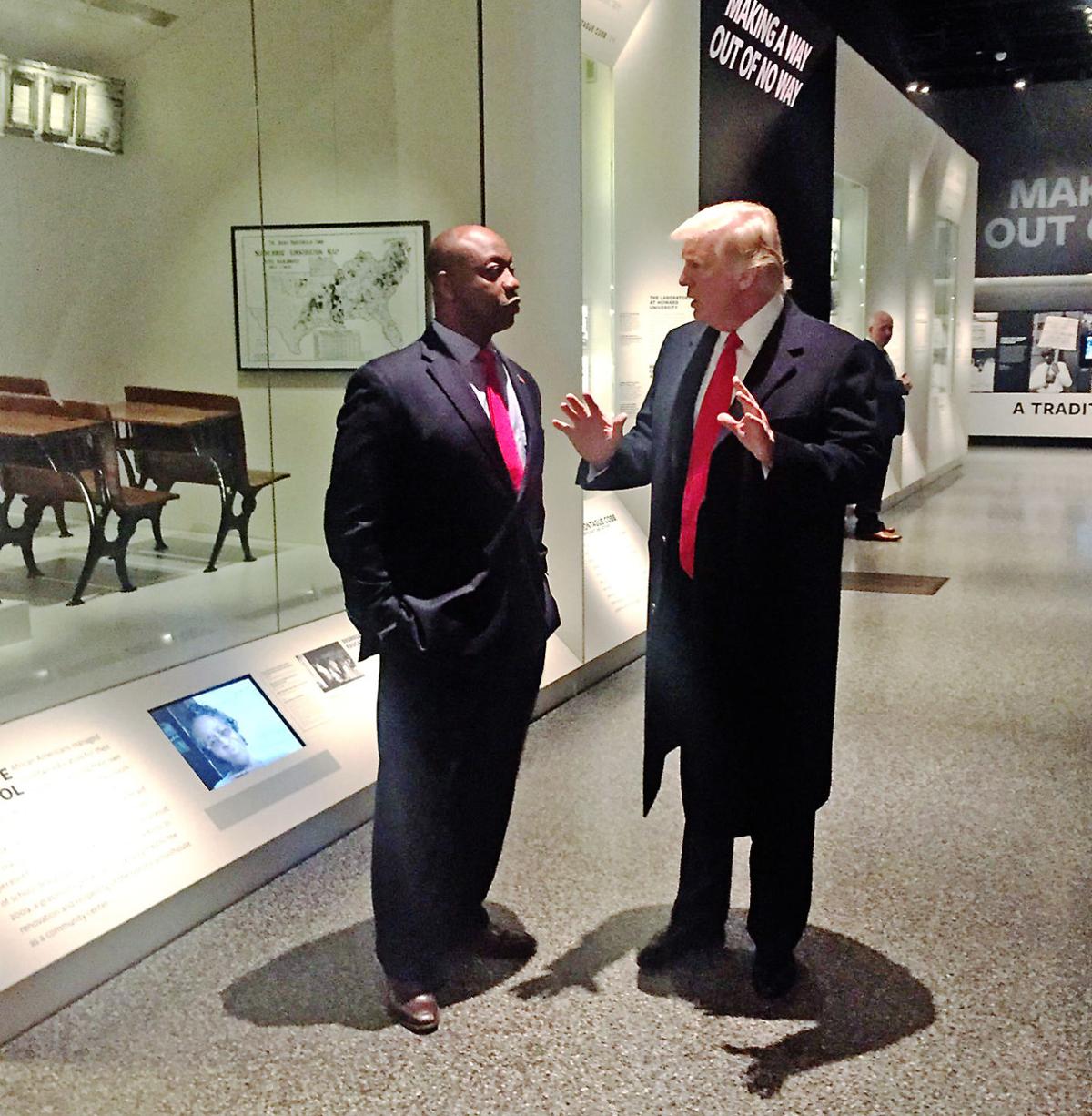 Sen. Tim Scott was part of a delegation to tour the National Museum of African American History and Culture with President Donald Trump on Tuesday. Provided/Office of Sen. Tim Scott 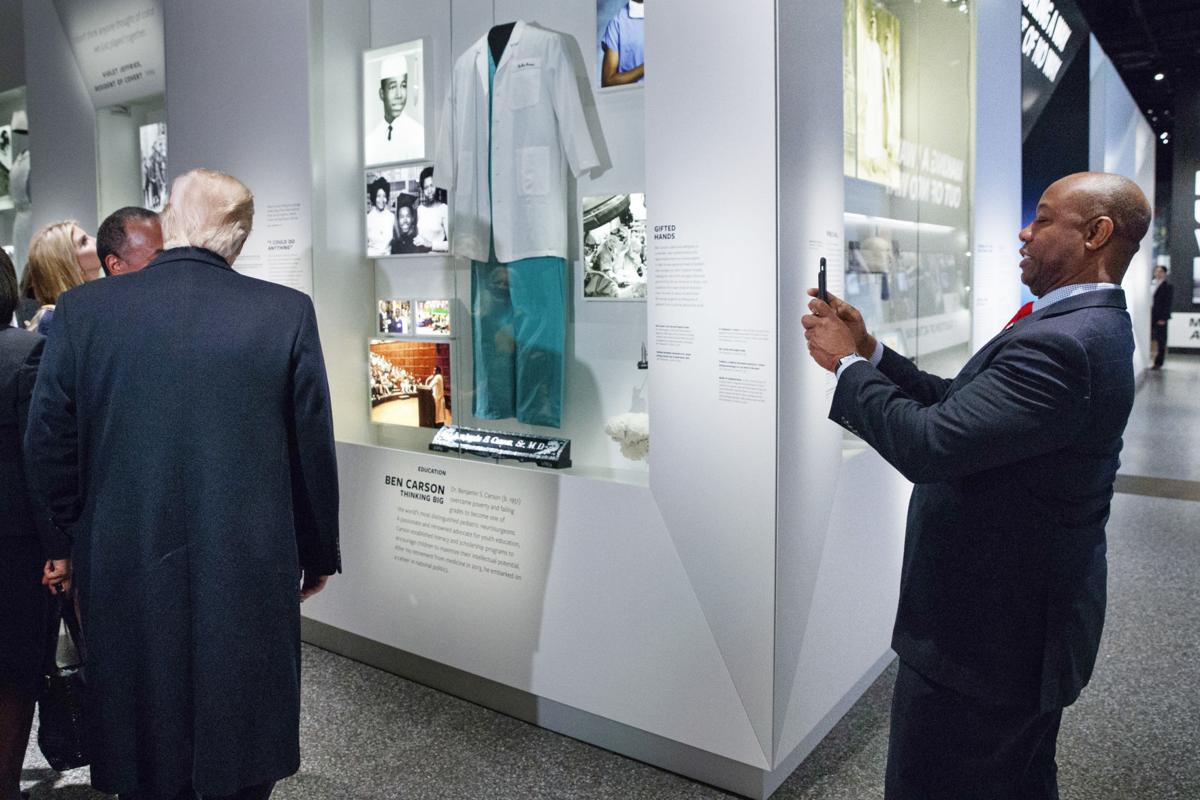 Sen. Tim Scott, R-S.C., takes a photo of President Donald Trump during a tour of the National Museum of African American History and Culture, Tuesday in Washington. (AP Photo/Evan Vucci)

Sen. Tim Scott was part of a delegation to tour the National Museum of African American History and Culture with President Donald Trump on Tuesday. Provided/Office of Sen. Tim Scott

Sen. Tim Scott, R-S.C., takes a photo of President Donald Trump during a tour of the National Museum of African American History and Culture, Tuesday in Washington. (AP Photo/Evan Vucci)

"A friend of mine," Trump said Tuesday of Scott during remarks at the Smithsonian Institution's newest offering. "A great, great senator from South Carolina ... fantastic in how he represents the people."

Until Tuesday, Trump and Scott had not actually spent any length of time together since the lead-up to the South Carolina GOP presidential primary just over a year ago this week.

"I like the state of South Carolina," Trump said Tuesday. "I like all those states where I won by double, double, double digits."

Scott has become a fixture at White House events to mark Black History Month as the Senate's only black Republican and the first African-American to be elected from the South since the Reconstruction era.

Since Trump’s swearing-in Jan. 20, Scott has accompanied Vice President Mike Pence to West Point to meet with black cadets and to a roundtable to speak with black entrepreneurs.

Scott said his participation in Trump’s delegation to the black history museum — which also included Housing and Urban Development Secretary-designate Ben Carson — was a natural fit.

“This one just seemed like a perfect one,” Scott told The Post and Courier. “I do want to be a bridge-builder and I do think (going to) the African-American museum (with) President Trump is a great place for me to be and help at least illuminate the important role that folks have played in building this country.”

Trump has cited his strides with the black community during the campaign and since his inauguration. However, his comments about crime in inner cities and his recent suggestion that an black reporter set up a meeting for him with the Congressional Black Caucus, has rankled critics.

Asked whether he thought Trump needed a “bridge-builder” between his administration and black Americans, Scott replied, “stay tuned. We have a lot of work to do. I think we will make more progress than folks will give us credit for.”

Scott is helping orchestrate a forum next Tuesday with presidents of historically black colleges and universities. He said Trump would also be meeting with some of those HBCU leaders that could occur in tandem with executive actions.

In the meantime, Scott said he is building relationships with the administration to promote some of the ideas he thinks Republicans should seize on, particularly relating to education and helping poor children succeed.

“I’ve been purposeful about this,” he said. “I’ve had a responsibility as a senator to South Carolina, and I would love to have an open door policy with the administration so I can continue to promote some of the priorities that we have in our state to help move our country forward."

Scott described himself as having a “policy role, a legislative role and also an important role in finding the glue that makes America great.”

As for the museum visit, Scott said he wanted Trump to draw his attention to the slave cabin Smithsonian curators transported from Edisto Island to Washington. He also spoke to Trump about Charleston’s complicated history with slavery and importing human cargo.

“We talked about the importance of progress in our country, talked about divisions in the country and how he hoped to find a way to heal them,” Scott said. “And I just encouraged that sentiment, that it’s important for us to find a path forward.

“Of course we visited Dr. Carson’s exhibit,” said Scott, returning to the museum visit agenda. A glass display case celebrating Carson’s pre-politics achievements in neurosurgery is featured among the examples of black achievement. “And (Trump) is a boxing fan, so we spent some time at the Muhammad Ali.”

Scott said the new president seemed to absorb the collection during the one hour and forty minutes the group spent at the museum.

“He asked a fair amount of questions,” Scott said.