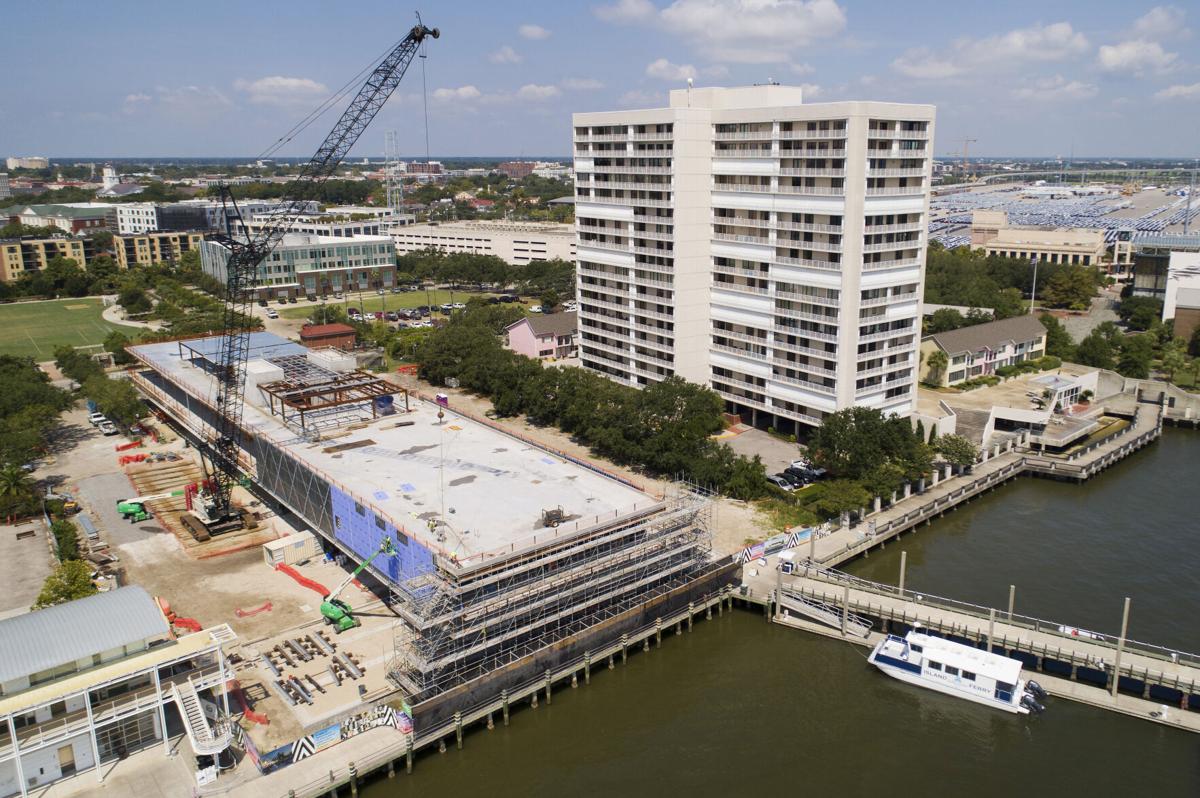 Construction crews work on the International African American Museum on Wednesday, Aug. 12, 2020. A plunge in tourism and business travel is rippling through the local economy as accommodations tax revenue drops and  museums, theaters, festivals and local governments see their funding slashed. Lauren Petracca/Staff 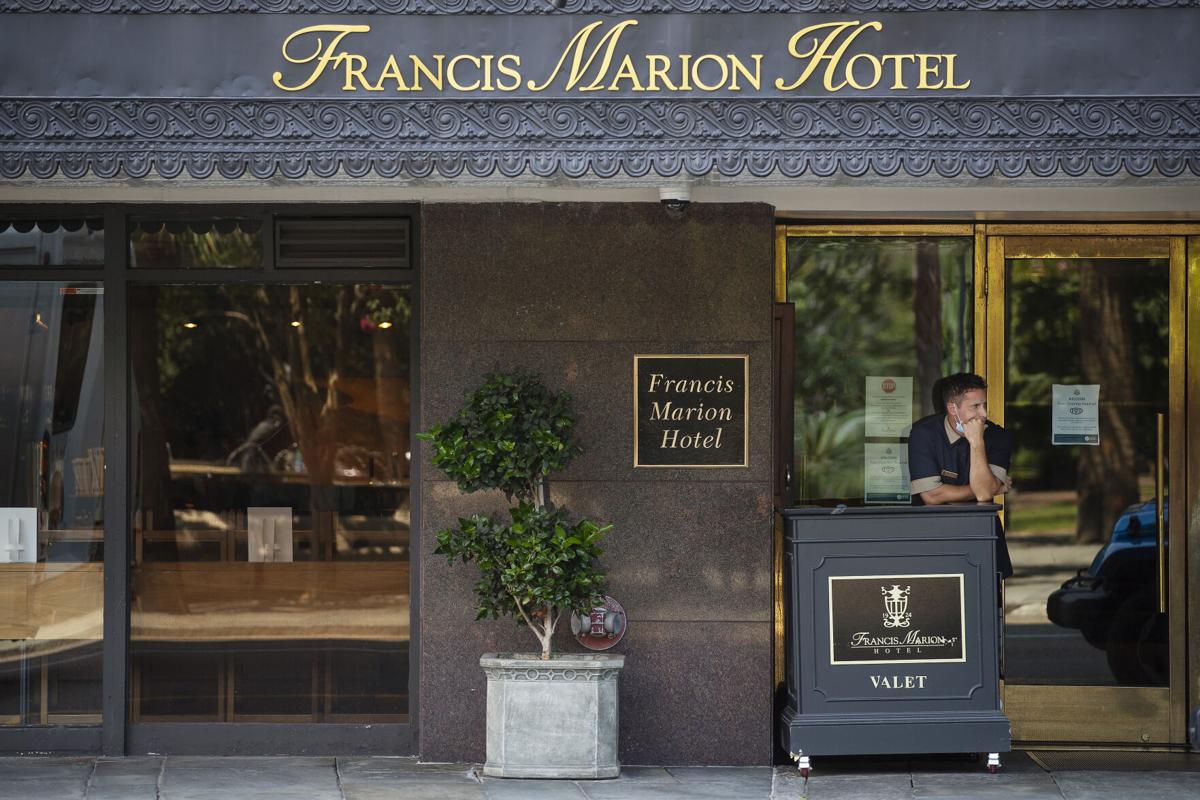 A concierge waits for guests outside the Francis Marion Hotel on Wednesday, Aug. 12, 2020. Lauren Petracca/Staff 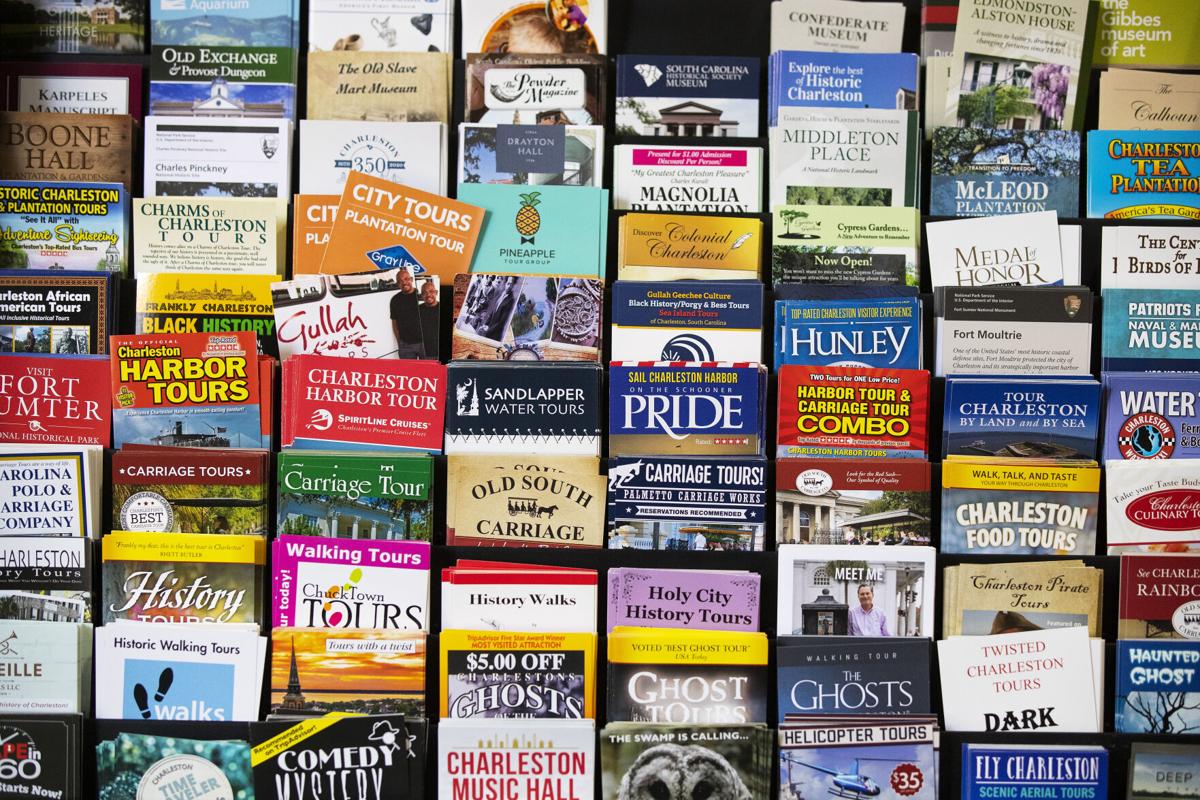 Travel brochures are displayed in the Charleston Visitor Center on Wednesday, Aug. 12, 2020. A plunge in tourism and business travel is rippling through the local economy as museums, theaters, festivals and local governments see their funding slashed.  Lauren Petracca/Staff

In a replay of the Great Recession, a plunge in tourism and business travel is rippling through the local economy as museums, theaters, festivals and local governments see their funding slashed.

The money comes from hotel taxes collected by the state, county, and some towns and cities. It supports public services such as police and fire departments, and the institutions and festivals that bring tourists and put "heads in beds," as local officials say.

When hotel rooms are empty, so are municipal bank accounts for accommodations taxes — known as A-tax, for short. This year, Charleston County has eliminated A-tax funding for 40 local governments, arts groups, festivals and institutions that were budgeted last year.

Those same organizations have been facing serious financial challenges for months. The S.C. Aquarium, which received $25,000 in A-tax funding from Charleston County last fiscal year, will get $0 this time around.

The aquarium just laid off 23 employees and reduced some jobs from full-time to part-time.

Attractions use A-tax money to promote themselves to potential visitors, but now it's unclear for some if they'll be able to fund marketing budgets this year.

There is a "domino effect," said Cat Coughlin, who manages marketing and communications at Drayton Hall.

Like other historic sites, visitation there has dropped off significantly. Drayton is only open Friday through Sunday instead of seven days a week. On the days it is open, the site is seeing about 40 percent of its average visitation.

Without admissions where they need to be, it's unclear where the money would come from to pay for advertising, especially now that grant dollars Drayton Hall thought it would get aren't coming.

Coughlin's main concern is being able to get the word out about the new house tour the museum is starting this fall. It's the product of about two years of work by the curatorial staff and shifts focus to the people who were enslaved here.

At the county level, a domino effect is playing out, too. Fewer people are filling hotel rooms, so there's less money for marketing to attract tourists, but also less money for county services that millions of annual tourists require.

“What has happened is we are anticipating that we will not collect enough A-tax to cover the costs the county incurs and distribute funds to the municipalities," said Corine Altenhein, Charleston County deputy administrator for finance. “We essentially lost March, April, May and June."

The county collected nearly $18 million in hotel taxes in the fiscal year that ended June 30, 2019. That plunged to just over $12 million for the 2020 fiscal year, with most of the hit coming this year. Revenue is estimated to fall to $10 million for 2021.

Most of that money will be kept by the county for its own budget, but millions are still distributed to projects that have agreements or contracts with the county. They include the Charleston Museum, the North Charleston Convention Center and the International African American Museum. The Charleston Area Convention and Visitors Bureau will get $1.26 million, a roughly $1 million budget cut, for tourism marketing for the region.

For towns and cities that levy their own hotel taxes, such as Charleston and Mount Pleasant, the losses are compounded. Their own A-tax revenues are down, and they are getting no A-tax money from the county this fiscal year.

“I think 2021 will be hit harder than 2020 because in 2020 we had seven good months," said Mount Pleasant Chief Financial Officer Marcy Cotov. "We don’t know when things are going to come back."

The Medal of Honor Museum, a project to which the town has devoted most of its share of county funding, was expected to get $500,000 last year but got nothing from the county.

"We are trying to figure out how we will make up for these losses," said the city of Charleston's Chief Financial Officer, Amy Wharton. “It’s just a very big impact impact very quickly."The county also cut to zero the $1.25 million annual allocation Charleston had been getting for the International African American Museum, but no impact is expected because the county's payments were running ahead of schedule on that project. Wharton said the city's debt payments for the museum are covered through March 2023.

Towns and cities have the ability to tax, or borrow, and they have large workforces. Some, like Mount Pleasant, have already frozen positions and halted pay increases.

Small arts organizations and other nonprofit institutions have less flexibility, and little business to sustain them during the pandemic.

For some, the risks of the virus have still kept them closed or operating in a very limited capacity.

That's the case at the Children's Museum of the Lowcountry in downtown Charleston, which has largely stayed closed to the public except for select "play date" times for a limited number of guests. Unlike an art gallery or a garden, the museum is like one big high-touch surface, making it very difficult to operate safely.

Right now, the museum loses money every time it opens, said Executive Director Nichole Myles. Combine that with the constant upkeep needed for their city-owned building, a historic train shed built in 1859, and they're "losing money every day," she said.

For them, A-tax funding is not supplementary, Myles explained. With no visitation to speak of, it was some of the only money they expected to get this year. Losing the county money is less substantial, but the Children's Museum gets the bulk of its A-tax money — about $100,000 — from the city of Charleston.

The first installment of the 2020 allocation was received earlier this year, but three-quarters of it has not been paid. Like other city A-tax recipients, Myles received a letter in June warning the museum that the rest of their grant would not be paid on schedule and might not be paid at all.

"You may receive a portion of these funds later in the year," the letter said. "However, it is just as likely that any future payments will not be made."

A final decision on grant payments would likely be made sometime between October and January, according to the letter.

At least one of the county's A-tax cuts, the almost $13,800 that went to the Charleston Food + Wine Festival last year, won't have an impact since the 2021 event has already been called off.

But others, like the Southeastern Wildlife Exposition — the unofficial annual kickoff to Charleston's tourism season — are, as of now, still on and will have to come up with their own money to advertise. About $13,700 in county A-tax funds went to the event last year.