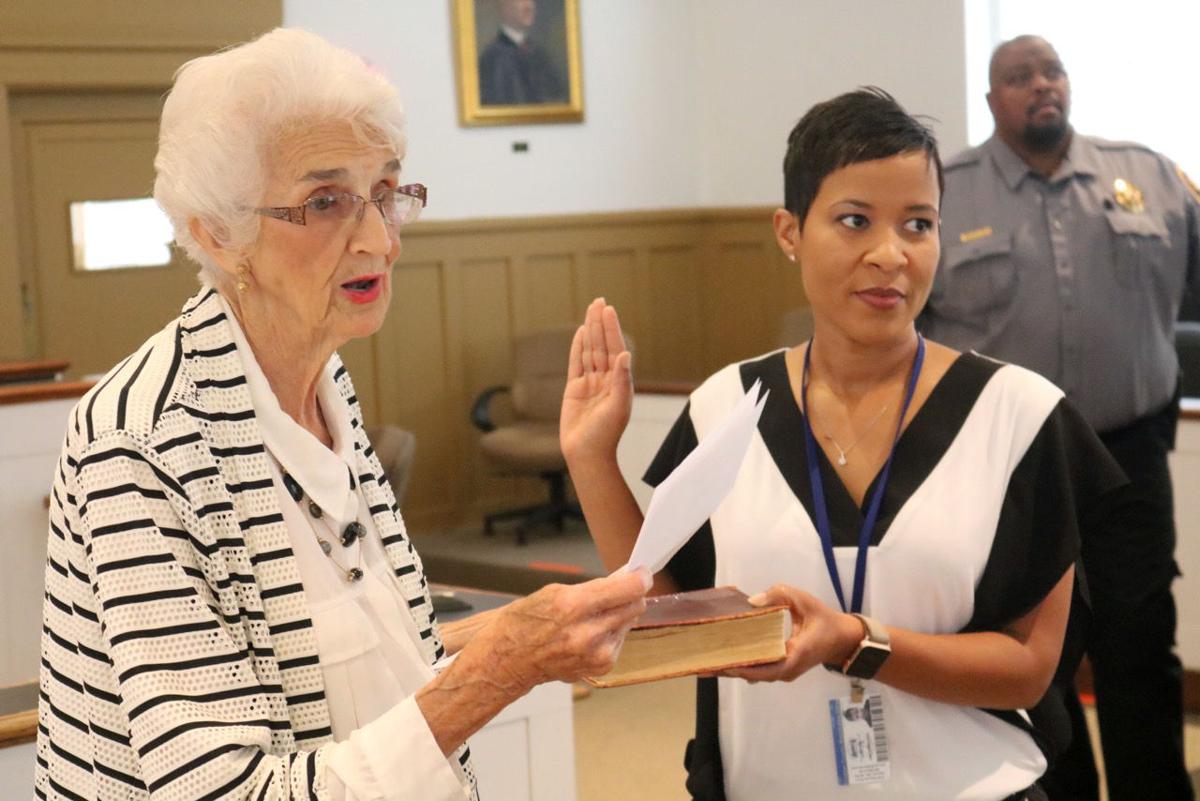 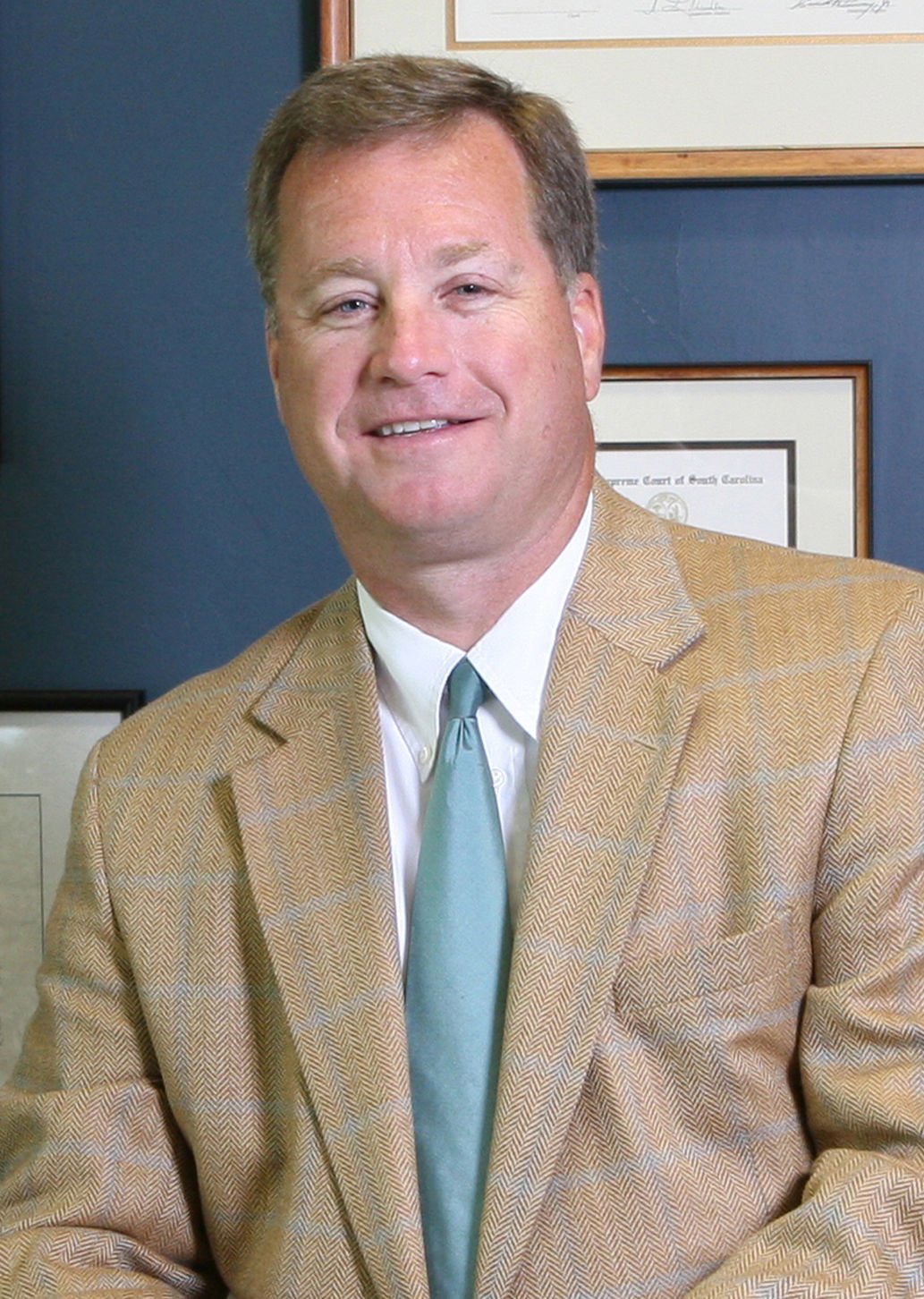 Creighton Coleman is a former state senator who first appointed Magistrate Angel Underwood to the bench in 2011. He now says he has regrets about that move. Provided. 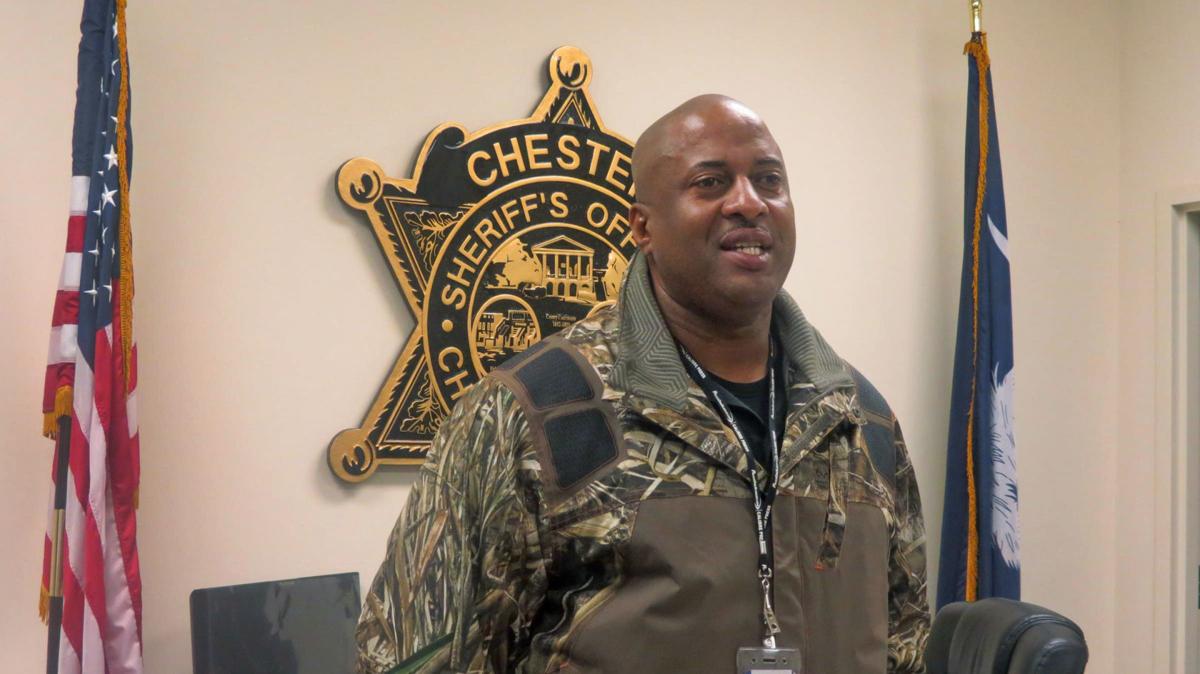 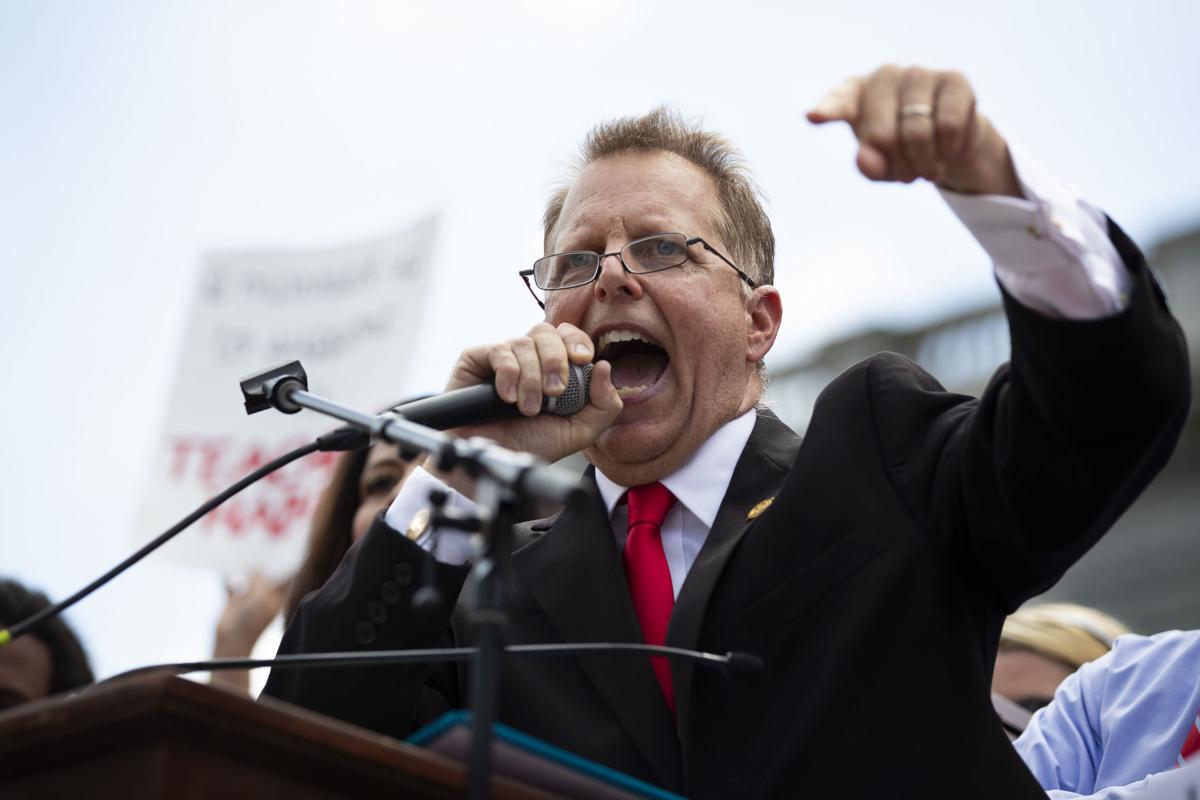 Senator Mike Fanning. Fanning chose to retain Angel Underwood as magistrate this year despite her previous suspension from the bench. Lauren Petracca/Staff

A top deputy planned to file a complaint with the chief magistrate and the local state senator, who controls the county’s judicial appointments. But before doing so, the deputy turned to an unlikely ally to help craft his appeal: Magistrate Angel Underwood.

The arrangement was highly unusual. Underwood was a sitting judge, sworn to remain impartial from those who brought matters before her. She was also the wife of the sheriff, Alex “Big A” Underwood. Intermingling those two roles had recently brought her a yearlong suspension from the bench; the state’s judicial watchdog found that she failed to disqualify herself in more than 100 cases brought by her husband’s department.

And yet, just months after returning to her magistrate duties, the judge secretly aided the sheriff’s office in drafting a complaint against her colleagues on the bench, according to emails and internal documents obtained by The Post and Courier and ProPublica. The one-page complaint, a document with metadata identifying Underwood as the author, questions the impartiality of Magistrates Lenard Price and Wylie Frederick, citing a “pattern” of denying narcotics warrants. Those rejections, the complaint says, put the community at risk.

“For your review,” Underwood wrote in a Jan. 23, 2017, email, before sending the file to Deputy Robert Sprouse.

“I love it,” the deputy replied. “I will put it on letter head in the morning.”

Sprouse did exactly that. He then signed the document himself, addressing it to the county’s chief magistrate, as well as state Sen. Mike Fanning, who later replaced Price and Frederick. The two magistrates insisted they did nothing wrong in rejecting some of the sheriff's warrants. "You want to be fair, but it is a judgment call," Frederick said. ​

Underwood, whose role in the complaint has not been previously reported, declined to be interviewed for this story. Fanning reappointed her to another four-year term on the bench in May. A lawyer for Sprouse did not respond to phone and email messages.

The document raises fresh questions about Underwood’s conduct as a judge, as well as the inner workings of the department her husband ran until his indictment and suspension without pay this year. Federal prosecutors have accused Alex Underwood and two deputies, including Sprouse, of conspiracy and other misconduct. Among the alleged offenses: The sheriff listed his wife as his employee while she was a magistrate and used taxpayer funds to take her to law enforcement conferences in Reno, Nevada, and New Orleans.

Alex Underwood and his deputies have pleaded not guilty to the charges in the ongoing federal case. In inviting his wife on the trips, Alex Underwood denied doing anything wrong, and his lawyer, Stanley Myers, told reporters this week that the sheriff “repaid whatever he felt he needed to.”

The Post and Courier also sent a summary of this article's findings to Myers, who said he advised Underwood not to discuss the matters while he is under indictment.

Angel Underwood’s involvement in the sheriff’s office complaint also provides a new window into South Carolina’s little-watched lower courts, where magistrates are supposed to serve as a vital check on law enforcement, deciding whether sufficient probable cause exists to support arrest and search warrants, weighing evidence during trials and imposing judgments. The role is even more critical in the lower courts because sheriff’s deputies and police officers often take the place of prosecutors in presenting evidence.

“At that point, the judge has become an agent of the sheriff,” Adams said.

Adams also questioned whether Underwood, who is not a lawyer, engaged in the unauthorized practice of law.

“She’s giving legal advice to the sheriff’s office, saying, legally, this is what’s wrong,” said Adams, who reviewed the complaint upon The Post and Courier’s request. “That’s what lawyers do.”

As the newspaper and ProPublica reported last week, magistrates are not required to have a law degree. More than that, the investigation found nominees for these posts undergo little vetting and then preside with little oversight. They are not subjected to legislative hearings before lawmakers sign off on their appointments, and, because of a flaw in the application process, they are not required to disclose past misconduct. That lack of scrutiny has provided fertile ground for incompetence, corruption and other abuse, the news organizations found.

In Underwood’s case, she did not disclose her previous suspension to the governor when seeking reappointment this year. Her nomination sailed through the state Senate, where, unlike any other state, members have the power to hand-pick local judges. In a dozen of the state’s 46 counties, including Chester, that decision lies in the hands of a single senator.

Fanning, the sole senator representing a rural swath between Columbia and Charlotte, chose to retain Underwood this year while replacing six of the 10 remaining lower-court judges in his district, including the two who were the focus of the complaint. He declined to discuss details, but in a brief interview he said that he stood behind Underwood.

Fanning noted that state Supreme Court Chief Justice Donald Beatty, South Carolina’s top court official, elevated Underwood to the role of the county’s chief magistrate this year. Beatty declined to be interviewed. In a brief statement, he stressed that the state’s judicial branch plays no role in the selection of magistrates. He didn’t answer a question about his decision to name Underwood chief magistrate.

Underwood, Fanning added, is “one of the most outstanding magistrates in the state of South Carolina.”

Some of Underwood’s former colleagues, however, disagree.

After receiving the complaint from Sprouse, Barbara Cameron, who served as chief magistrate of Chester County before Fanning replaced her this year, organized a meeting in 2017 with the accused magistrates and the deputy to discuss the department’s grievances.

She only learned of Underwood’s involvement recently from a Post and Courier reporter.

“I feel like all of us were fooled,” Cameron said.

Separately, she filed a complaint against Underwood in June with the Office of Disciplinary Counsel, which polices lawyers and judges in South Carolina. She accused Underwood of improperly presiding over a drunken-driving case brought by the sheriff’s office — and then forging Cameron’s name on a court document to cover it up.

The proceeding occurred in 2017, a few months after Underwood helped draft the document for the sheriff’s office.

Cameron also noted that Underwood stayed “constantly involved” in the operations of the sheriff’s office and held meetings behind closed doors with top deputies. No other magistrate did this, she said. “The appearance of impartiality and fairness between the departments was laughable,” Cameron wrote in the confidential complaint, a copy of which was obtained by The Post and Courier.

Cameron’s lawyer, Everett Stubbs, sent additional information to the disciplinary office in September. He alleges Underwood reviewed messages sent to the sheriff’s office Facebook page and directly forwarded tips to deputies for action. In one case, the judge contacted a deputy after she heard from a woman who wanted the sheriff to do something about a dealer thought to be selling drugs to the woman’s daughter, emails show.

“Please do something about this ASAP because she is Alex biggest supporter,” the judge wrote to a deputy.

The complaint is still pending. After Angel Underwood did not return messages requesting an interview, The Post and Courier sent her a memo detailing the findings of this story. Her attorney, I.S. Leevy Johnson, wrote back, saying the judge had nothing to say on the subject.

Former state Sen. Creighton Coleman, who first appointed Underwood to the bench in 2011, now says he has regrets. “That was the biggest mistake I ever made in my life,” he said.

Coleman said he had concerns about Underwood because her husband was considering a run for sheriff at the time, and handling the department’s cases as the sheriff’s wife would be unethical. He said he ultimately appointed the judge on the promise that her husband would not seek the office, a promise Coleman maintains Alex Underwood broke when he mounted a campaign and won a few months later.

Alex Underwood denies this, telling The Post and Courier earlier this year that Coleman’s account is “ridiculous.”

Fanning, who ousted Coleman from the state Senate in 2016, stands by the couple.

In fact, according to The Independent Voice newspaper, the lawmaker tapped the Underwoods for a special assignment this year: screening candidates for magistrate openings.

This article was produced in partnership with ProPublica. The Post and Courier is a member of the ProPublica Local Reporting Network.

ProPublica is a nonprofit newsroom that investigates abuses of power. Sign up to receive their biggest stories as soon as they’re published.

He defended the Confederate flag and insulted immigrants. Now he’s an SC judge.