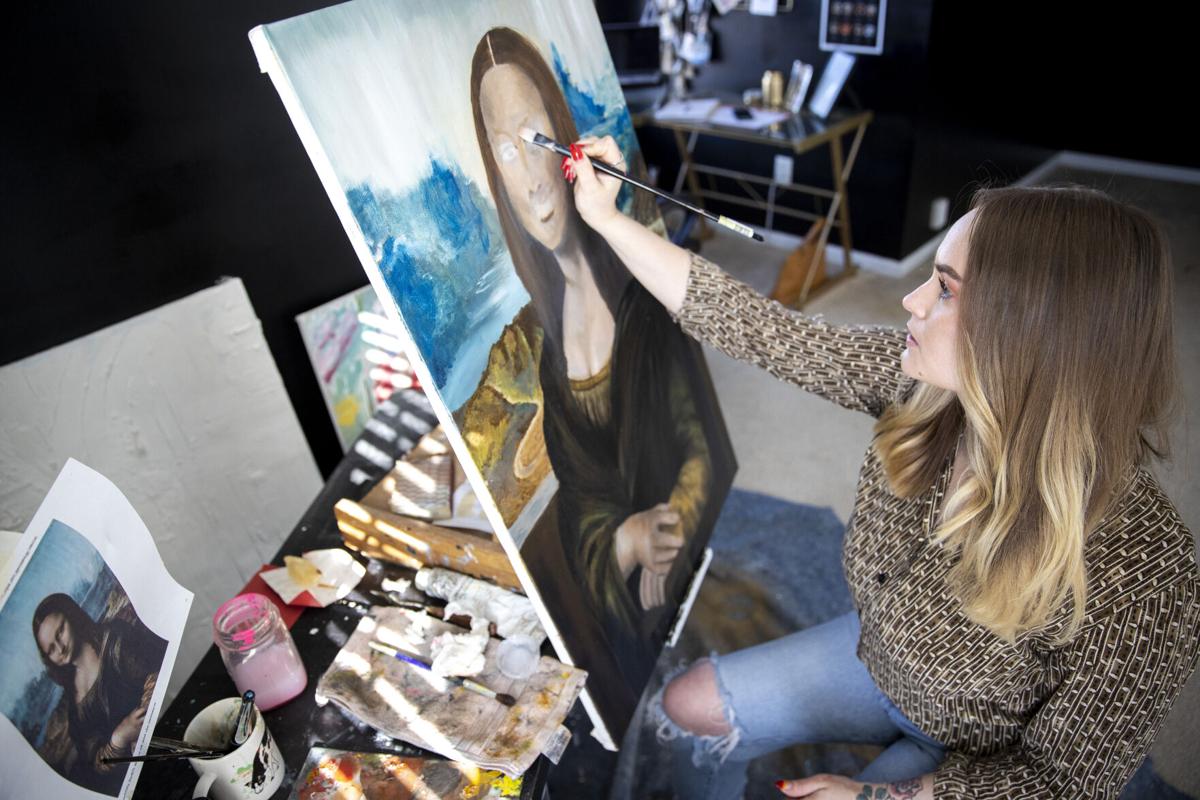 Kat Wehunt, the founder of The Formation Project, continues to paint on her artwork of Mona Lisa after work in her home studio on Thursday, Jan. 28, 2021 in Goose Creek. When she was a teenager, an older relative trafficked her for sex and uses painting to help cope with her past. Wehunt is now the only survivor in South Carolina to found her own organization aimed at connecting victims to resources. Andrew J. Whitaker/Staff 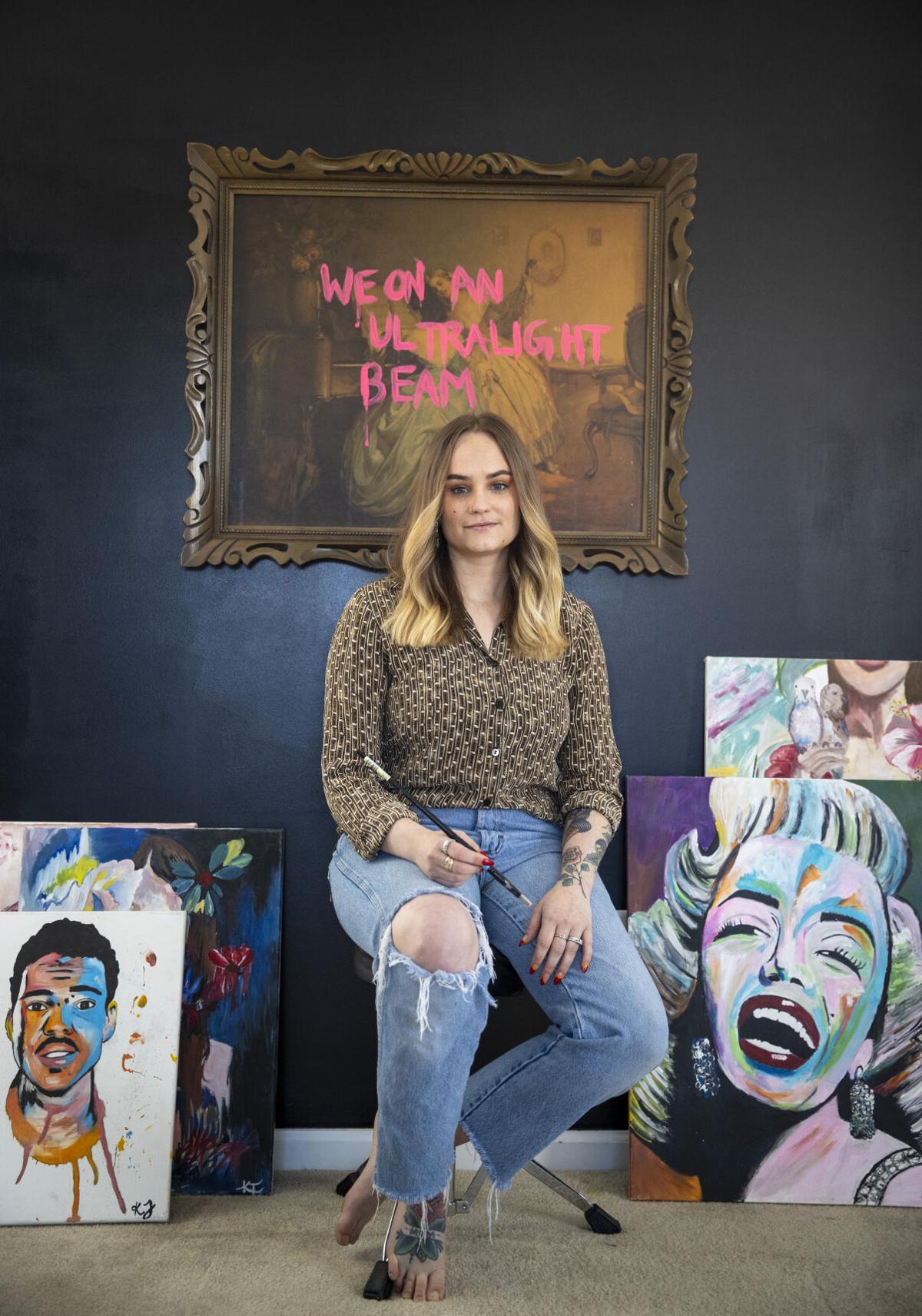 Kat Wehunt, the founder of The Formation Project, poses for a photo with her artwork in her home studio on Thursday, Jan. 28, 2021 in Goose Creek. Andrew J. Whitaker/Staff 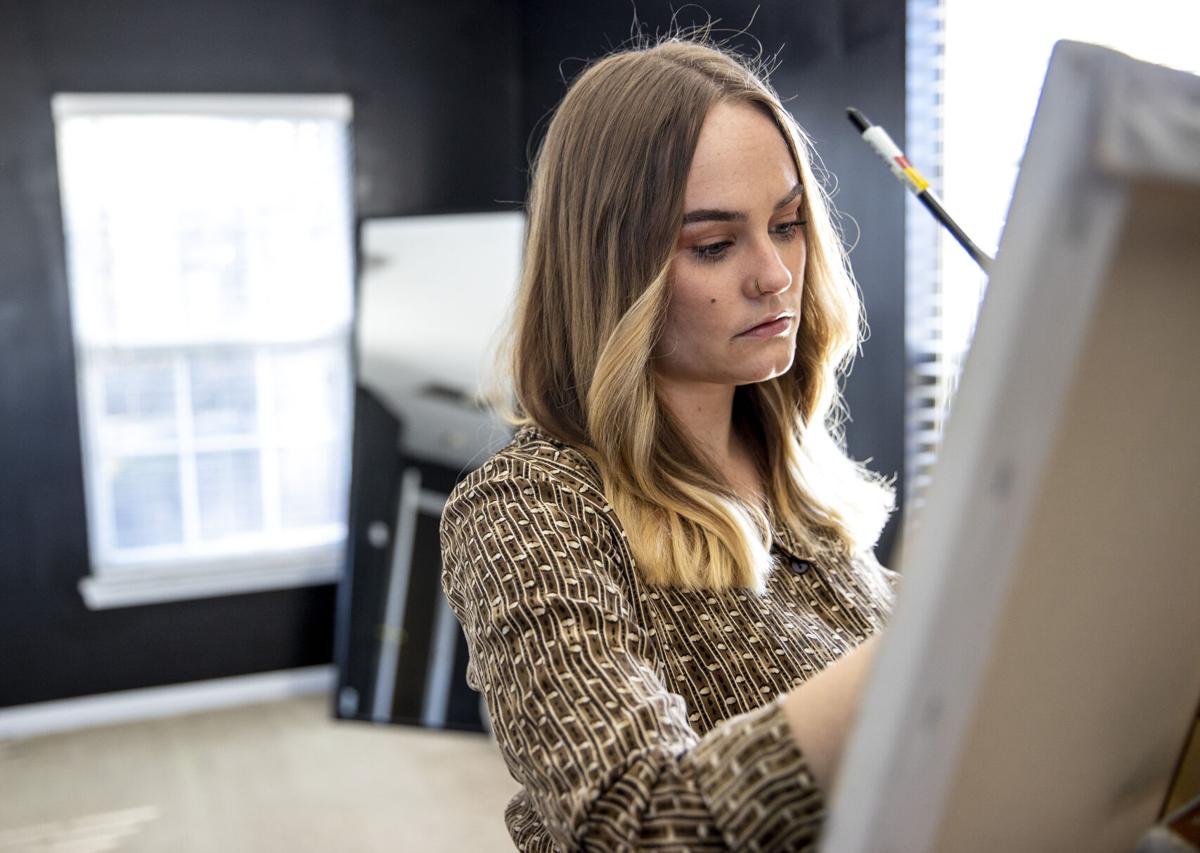 Kat Wehunt, the founder of The Formation Project, continues to paint on her artwork of Mona Lisa after work in her home studio on Thursday, Jan. 28, 2021 in Goose Creek. When she was a teenager an older relative trafficked her for sex and uses painting to help cope with her past. Wehunt is now the only survivor in South Carolina to found her own organization aimed at connecting victims to resources. Andrew J. Whitaker/Staff

As South Carolina’s leaders pledge to end human trafficking and prosecute its perpetrators, a Lowcountry woman is pulling their focus to the survivors of such horrors.

Kat Wehunt, who survived years of sex trafficking as a teenager, knows she’s lucky to have escaped. But she worries that her peers in the Palmetto State don’t have a simple, thorough and accessible system to help them maintain a life free from abuse.

Her solution is The Formation Project, the state’s only survivor-led nonprofit dedicated to ending human trafficking. While law enforcement, legislators and faith leaders work to pull victims from their abusers, Wehunt focuses on the next step: connecting them with resources to make sure they’re able to thrive for the rest of their lives with the physical and emotional support they deserve.

A woman named Heaven drove her to do it.

Heaven, a mother of three who’d pulled herself out of trafficking, was succeeding by every measure. Wehunt worked with her for about four years, she said, and watched as the woman saved her money, bought a car, took on a management role at her Orangeburg plant and regained custody of her children.

By every measure that Wehunt’s colleagues followed, Heaven was a success story. She’d stayed out of trafficking, pushed down a heroin addiction and started sharing her story with others. Even Wehunt figured she was safe.

But one day, when Wehunt had already moved to Charleston but not yet started The Formation Project, she got the kind of call for which she’s always preparing and never prepared. Heaven had overdosed and died.

Years before, Heaven had called Wehunt from a hotel room.

“I need you to get here,” she said. “My trafficker is on his way and if you get here before him, then I’ll go with you. But if he gets here before you then I’m gone.”

Wehunt raced to the hotel, speeding through her mental catalogue of which emergency shelters, rehabs and hospitals might have room for her friend. But Heaven had a different plan.

“Take me to CVS and I’ll get myself detoxed,” Wehunt remembered Heaven telling her. “Just drive me, I can take care of the rest.”

So Wehunt was especially shocked when Heaven died without warning.

“It almost made me leave the field,” Wehunt said years later. “It’s so easy for organizations to get someone a job, or into rehab, and then check them off as a survivor. ... So she’s been my driving force.”

For every atrocity Wehunt has survived, she keeps a tally of the privileges that made it easier for her than many of the victims she serves. She’s White and grew up with good grades and a stable family income. An older man began trafficking her at 14, she says, but she was able to safely cut ties with him before her 18th birthday.

Wehunt knew she'd need help to heal from the sexual abuse, and the particular trauma of trust was betrayed by the man, whom she knew. But — perhaps in part because she said she'd always thought of sex trafficking as a crime committed by violent strangers — she didn't realize she'd survived it until learning the definition in a social work training clinic.

“I was like, oh, I’m in the wrong place,” Wehunt said, gesturing to a cluster of survivors. “I think I’m supposed to be there.”

Nearly 10 years later, she hasn't publicly identified her abuser but wants to share her story so that other victims can recognize the abuse.

Wehunt had never seen a trafficking survivor with her story. She knew of women who’d been kidnapped by strangers, made desperate by addictions and denied education. They’re overwhelmingly marginalized: transgender, undocumented, impoverished or women of color. They shared core experiences of abuse, but Wehunt stays conscious of her blind spots.

“On the one hand, it’s exhausting, being the only survivor who’s an organization leader here, and it’s really painful when people don’t seem to listen,” Wehunt told The Post and Courier. “I think it’s about using your privilege to open doors and then bring (marginalized survivors) in and put them on the stage.”

Wehunt said she’s eager to share more stories of South Carolina survivors, but stopped short of pressuring them to join her. No public awareness or education is worth a person’s wellbeing, she said — a lesson she learned the hard way.

How do you move forward from the worst part of your life while surrounding yourself with reminders of it?

It’s something Wehunt has meditated on but never found an answer to. In her early days as a social worker, she used all her energy to help others, and it took a full burnout for her to realize she’d need to prioritize her own happiness like she does other survivors.

“It feels selfish to even take a lunch break, when the people you’re trying to help don’t even have food or health care or a job,” she said. “I still struggle with that.”

Over the past couple years, Wehunt said, she’s gotten better at taking care of her own needs. She turns off her phone after work and spends her evenings painting or playing music with her husband, uninterrupted.

“I’ve started taking a step back and remembering that if a survivor I was helping told me she worked 16 hours a day, I’d see that as a major block to her healing,” Wehunt said. “That would be a failure.”

So every time Wehunt starts feeling overwhelmed or demoralized, she reminds herself of the joy she feels when another survivor finds a therapist, lands a job or starts a healthy relationship. If there’s hope for one of them, she said, there’s a future for all.