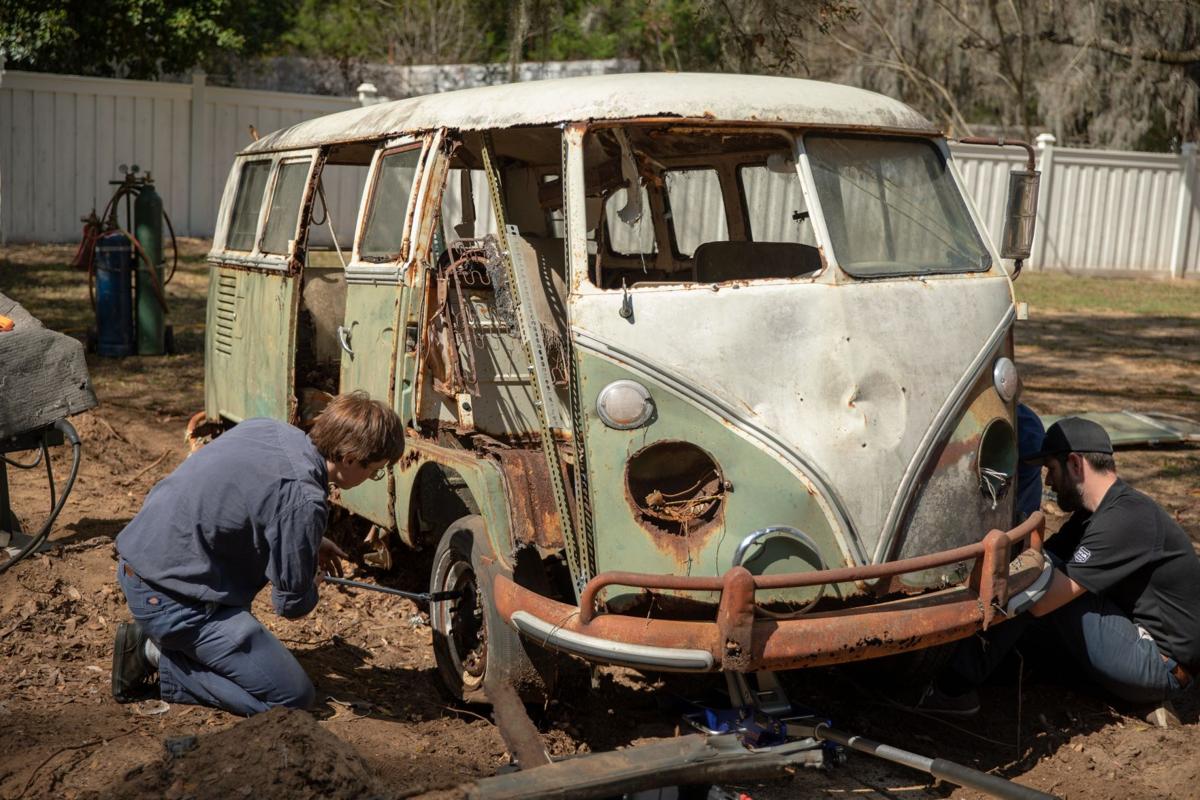 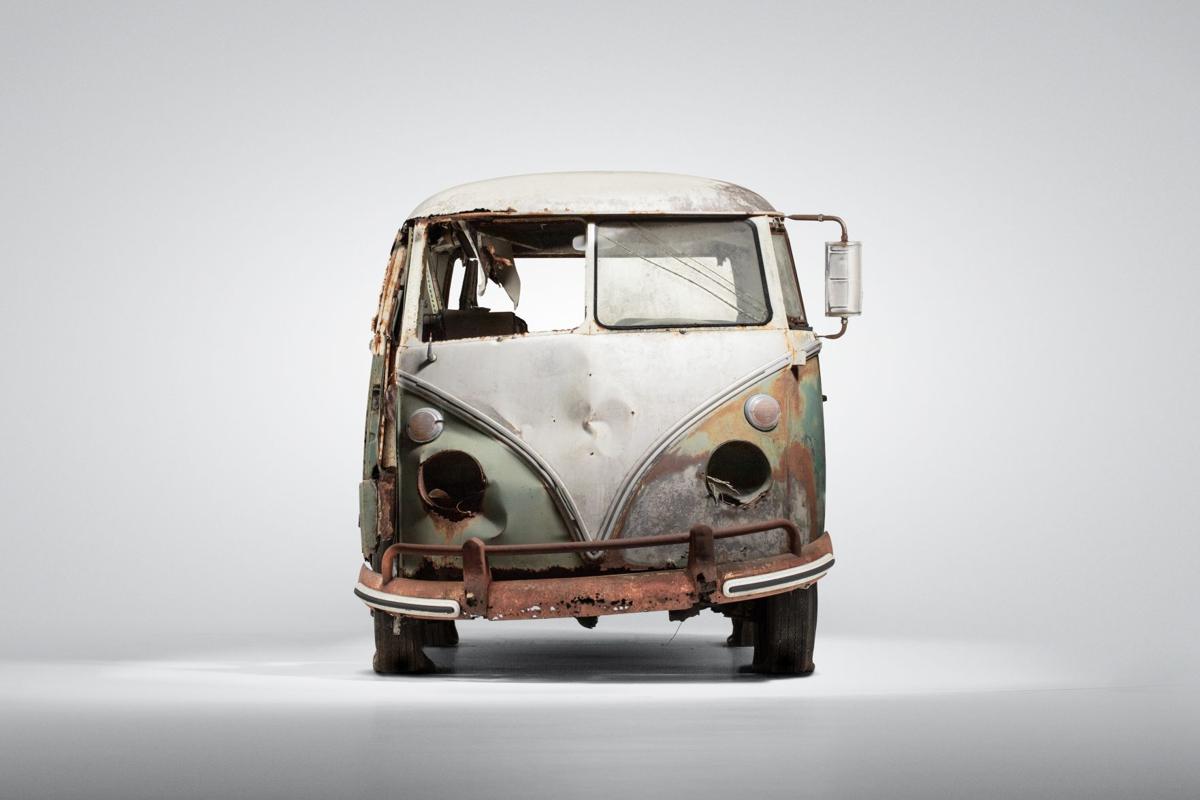 The 1966 Volkswagen Deluxe Station Wagon owned by Esau and Janie B. Jenkins of Johns Island will be on display on the National Mall in Washington, D.C. Sept. 20-27. Provided/Historic Vehicle Association. 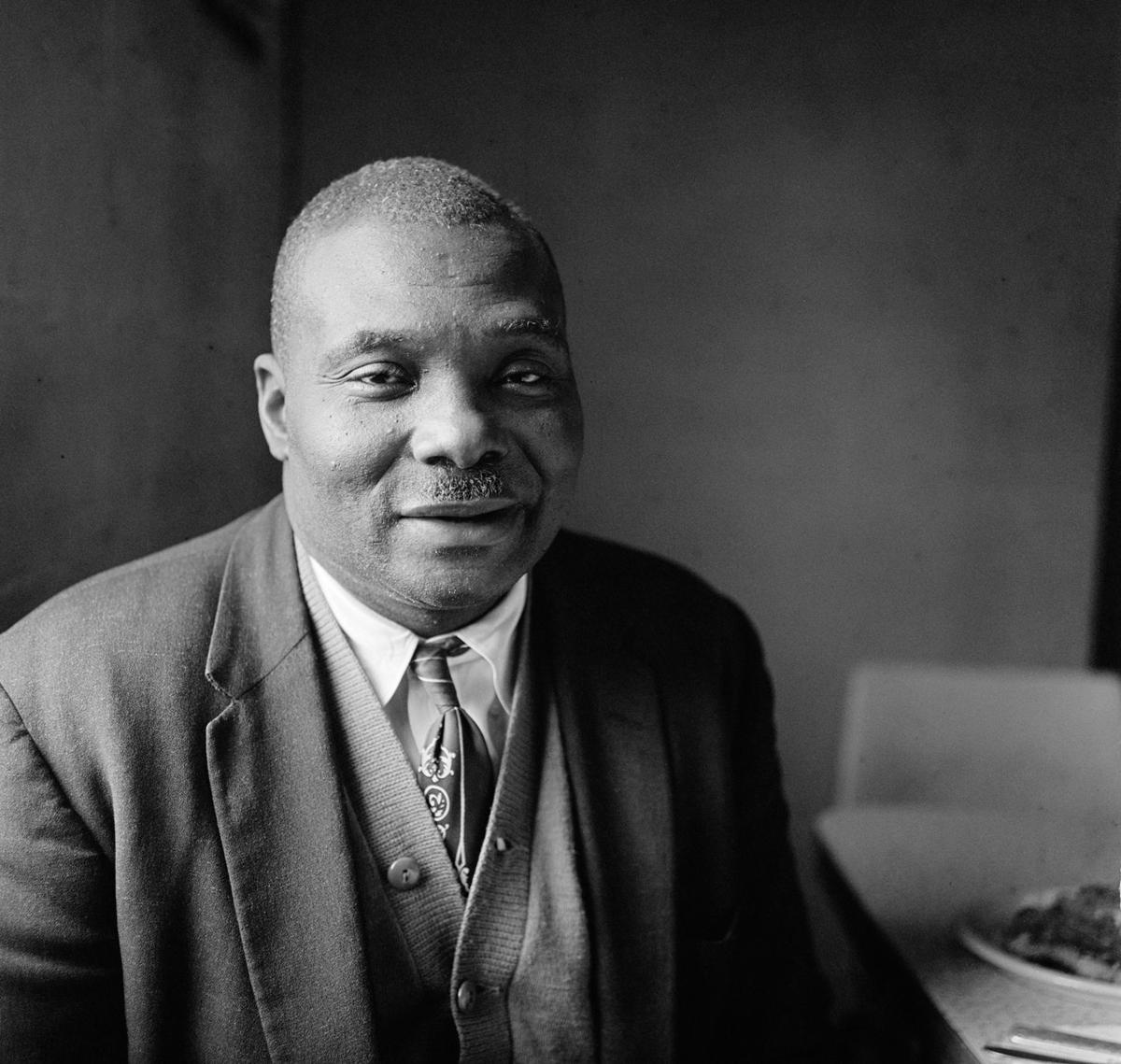 A portrait of Esau Jenkins by Ida Berman, taken in 1959. Jenkins was a pivotal civil rights figure in South Carolina. Provided 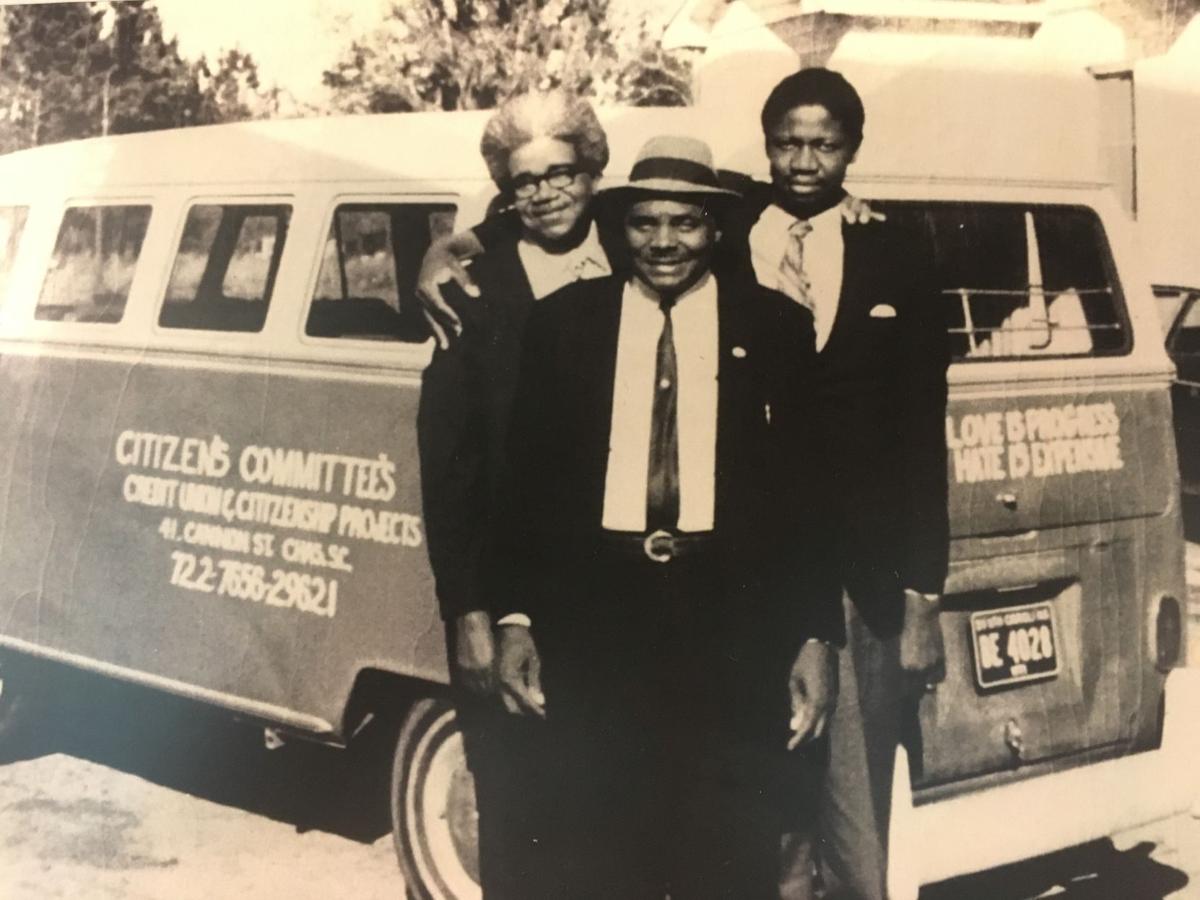 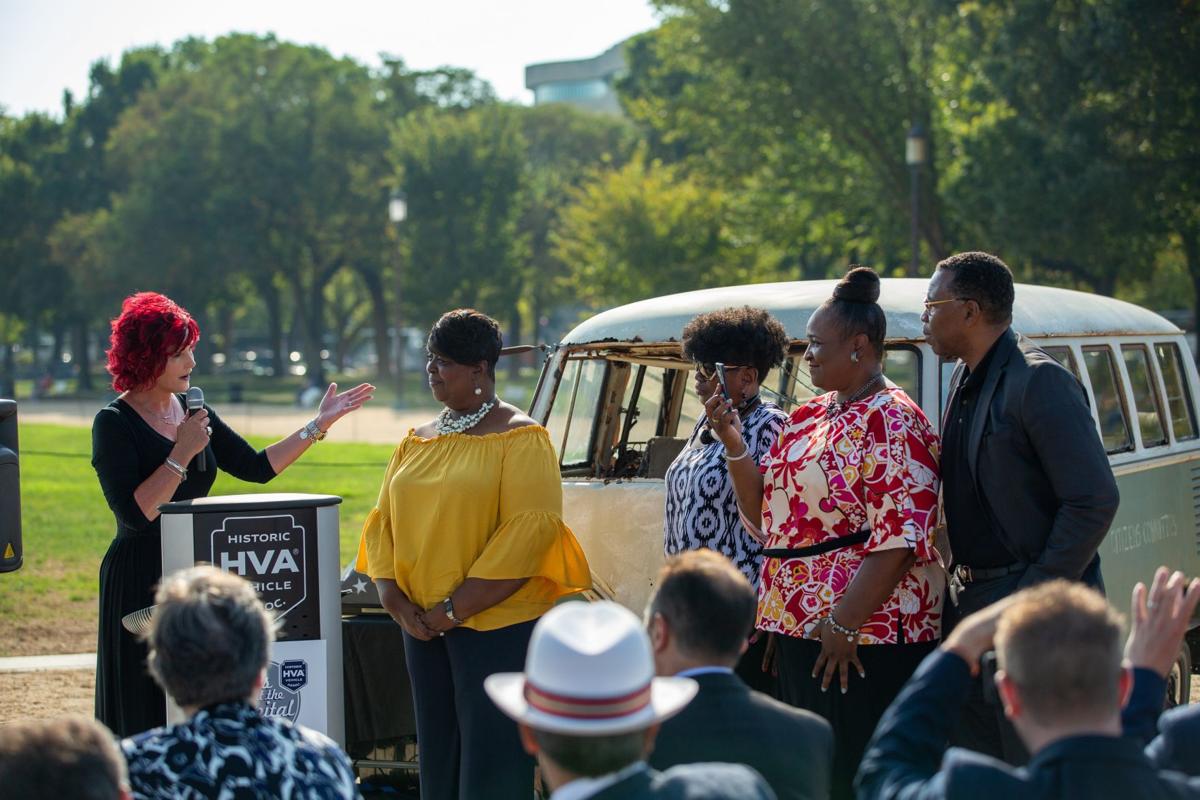 The 1966 Volkswagen Deluxe Station Wagon owned by Esau and Janie B. Jenkins of Johns Island will be on display on the National Mall in Washington, D.C. Sept. 20-27. Provided/Historic Vehicle Association.

It’s an unlikely display. A front window is missing, and the entire vehicle, a 1966 Volkswagen Deluxe Station Wagon — often described as a “microbus” — is somewhat lopsided, slumped with a side mirror missing. The car’s body is punctuated with dents, the front bumper is rusted and the headlights are gone.

It wouldn’t be surprising if someone asked what this car is doing on the National Mall.

But that’s just what the leaders at the Historic Vehicle Association, a national group dedicated to documenting, promoting and preserving America’s historically important vehicles are hoping people will want to know.

The vehicle in question, one of two featured in this year’s Cars at the Capital exhibit, a “pop-up museum” between the National Gallery of Art and the National Air & Space Museum in Washington, D.C., belonged to Esau and Janie B. Jenkins, two pioneers of civil rights. As business owners, community organizers and activists, the couple spent their lives in near-constant motion on Johns Island, trying to lift their community out of poverty.

On display with it will be a 1969 Chevrolet Corvette Stingray, formerly owned by Alan Bean. The Apollo 12 astronaut had leased the car for just $1 a year through a General Motors promotion exclusive to the nation’s early space travelers.

It’s a very different kind of car from the Jenkins bus, having won multiple restoration awards. To date, the black and gold Corvette has just a little over 35,000 miles on its odometer, according to the HVA.

The story of the Jenkins bus is much more in the miles driven than the car that drove them.

The Volkswagen served as a personal vehicle for the family, said Eldrina Jones, a granddaughter of Esau and Janie B. Jenkins. It was the car they used to go to community meetings, always Esau in the driver’s seat and Janie in the passenger seat. On the back panel, Esau had painted a motto, “Love is Progress, Hate is Expensive.”

The car was as recognizable on Johns Island as the Jenkins couple themselves.

“When people saw this little bus, they knew he was going to help,” said Diane Parker, vice president of the Historic Vehicle Association.

Esau Jenkins was born on Johns Island in 1910, on a farm off Bohicket Road. He and Janie married in 1926 and raised their family on the island, too.

In the 1940s, the couple started busing children to school and adults to work, from Johns Island, onto the Charleston peninsula and throughout the area. They provided people with a solution — free, reliable transportation — and asked that passengers show their thanks by becoming voters.

In 1948, Esau founded the Progressive Club, moving voter registration lessons from buses to a community center. To be a member, individuals had to pledge to become voters and, if they couldn't already, to learn to read and write.

“I have been having monthly meetings with people over the years, trying to obliterate ignorance, to promote health and social, educational and civic welfare, and to combat juvenile delinquency — to secure a more rich and abundant life for ourselves and for our posterity,” Esau wrote in a 1965 letter on behalf of the Progressive Club. The letter is kept in a collection at the College of Charleston’s Avery Institute.

“It’s the one place on the Island where they can play basketball, table tennis and other games, or skate,” he wrote of the center. The club also hosted community events and folk song festivals.

Esau had a particular focus on lifting families and individuals out of poverty. He helped found a federal credit union that gave African American families access to loans. According to a 1968 interview with the News and Courier, Esau would keep a buying guide in his Cannon Street office that showed people how to shop for bargains and avoid being overcharged.

It's likely that he even played an important role in the life of civil rights leader Martin Luther King Jr., who attended a meeting at the Highlander Folk School in Monteagle, Tenn. which was led, in part, by Esau.

"That meeting was the catalyst for King coming to the Charleston area," said Grant Gilmore, the director of the Historic Preservation and Community Planning program at the College of Charleston.

Though the Jenkinses are still relatively unknown to the general public, they served as examples of how to effectively counteract injustice, Gilmore said, finding "legal solutions to answer Jim Crow" and empowering people with practical tools like fair loans, literacy and voter education.

The Jenkins bus first caught Gilmore's attention on a trip to the National Museum of African American History and Culture in Washington, D.C. The back panel of the bus, which bears Esau’s motto, is on display there.

But the bus itself was still on Johns Island, and, after the removal of the back doors, was more open to the elements than ever.

Excavating the vehicle from the backyard was a complicated process. The bus was buried in several inches of dirt, and it wasn't clear if it could be safely extracted in one piece.

No one believed that the bus would come out of the ground the way it did, Jones said. But, surprisingly, when they were able to finally extract it, the car “stood proudly on its own.”

“It felt like they were there,” Jones said of seeing the bus emerge. “It felt like he was still in the driver’s seat and she was in the passenger’s seat.”

The planning, preparation and excavation itself took several days. Some people in the community even came out to help or watch, Parker said, because they remembered Esau and Janie.

The vehicle was carefully towed from the backyard into an enclosed transporter to make the trip from Charleston to the HVA’s national laboratory in Allentown, Penn. There, and with the help of a professional conservation firm, the interior and the exterior of the vehicle was fully stabilized.

The family has opted to preserve the bus rather than restore it. That means work was done to stabilize the vehicle and ensure that it can be safely moved from place to place, but it won’t be restored to an original or earlier condition. The wear on the car shows what it’s withstood.

“We wanted to preserve it in its current state, so it can tell its story on its own,” Jones said.

Both the Jenkins bus and Bean’s Corvette were briefly on display at the same time last Thursday at the exhibit’s kickoff.

The Corvette will be displayed in a custom-made jewel box on the National Mall through Sept. 19. Then it will be swapped out for the Jenkins bus from Sept. 20-27. The vehicles will then be taken back to the lab for final stabilization checks before transporting them back to their owners, Parker said.

Ultimately, Jones said, the family would like the vehicle to have a permanent home on Johns Island, at the site of the former Progressive Club. The building, which is on the National Register of Historic Places, was mostly destroyed by Hurricane Hugo in 1989, and, though progress has been slow, people still want to see it rebuilt.

Until then, Jones said, the stabilization work done by the HVA has allowed the bus to be safely transported, likely opening up more opportunities to display it at other museums. One possibility, Jones said, would be to display it at the International African American Museum, which is under construction now in downtown Charleston.

Having just the bus's back doors commemorated at the Smithsonian was an honor, but seeing the entire vehicle featured in one of the most prominent spots in the nation’s capital will be “an amazing opportunity,” Jones said, one that’s likely to be emotional.

And though most people who walk up to the car on the National Mall may have never heard of Esau and Janie B. Jenkins, at least, Jones said, they’ll be asking questions.

Cars at the Capital

WHAT: 1966 Volkswagen Deluxe Station Wagon owned by Esau and Janie B. Jenkins of James Island and a 1969 Chevrolet Corvette Stingray owned by Apollo 12 astronaut Alan Bean