A push notification sent Tuesday morning by AccuWeather was supposed to be labeled as a test, the National Weather Service in Charleston said. Provided 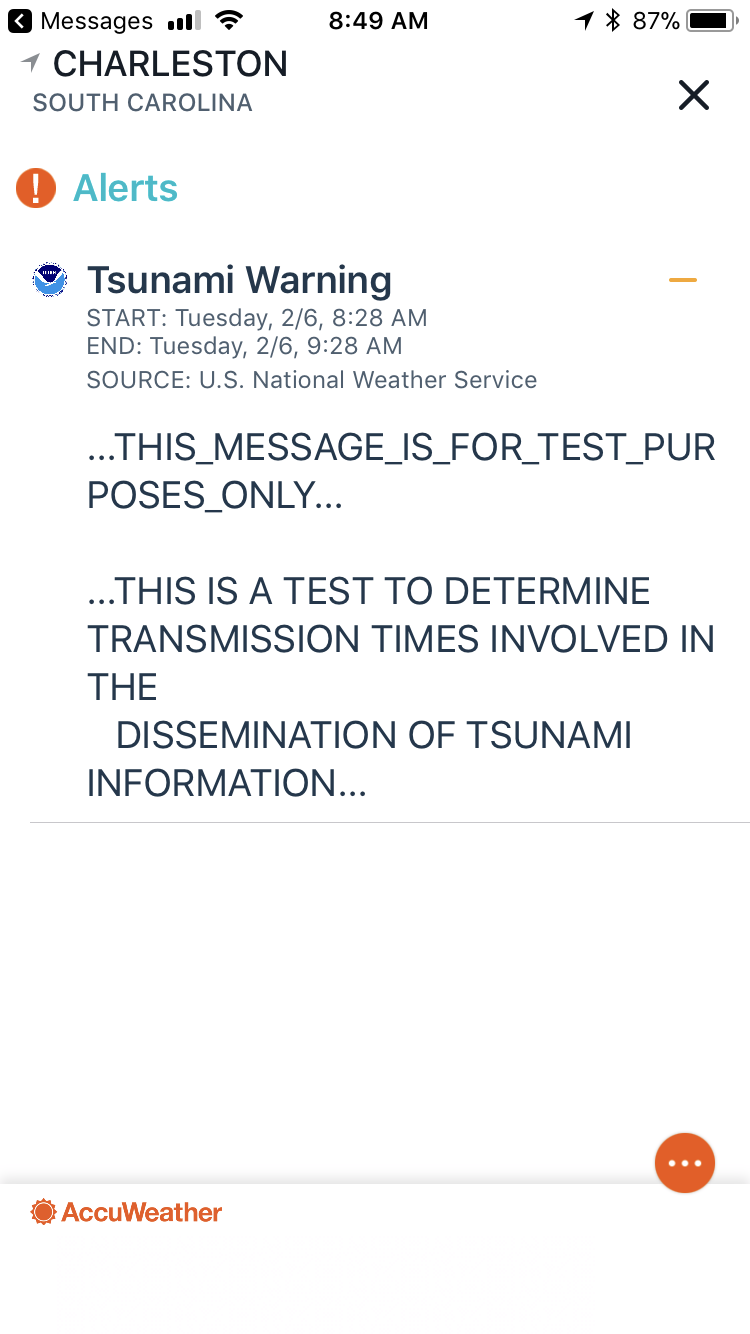 A message included with a tsunami warning distributed to AccuWeather users Tuesday morning stated that the alert was a test. Provided

A push notification sent Tuesday morning by AccuWeather was supposed to be labeled as a test, the National Weather Service in Charleston said. Provided

A message included with a tsunami warning distributed to AccuWeather users Tuesday morning stated that the alert was a test. Provided

Private and government forecasters blamed each other Tuesday for a tsunami warning that was mistakenly sent to mobile devices along the Eastern Seaboard, startling some South Carolinians.

Intended as a test of a National Weather Service warning system, the alert appeared to some users of AccuWeather applications as if it were real. It was distributed to phones and other mobile devices linked to AccuWeather's network on the East Coast, the Gulf of Mexico and the Caribbean.

Though the original alert was labeled as a "test," the private forecasting company said an underlying coding error by the Weather Service prompted its computers to send out the message as a real warning.

Few residents in the Charleston area, though, voiced concern to government officials about the alert. Still, it caused confusion among some residents.

Mike Wakefield, a Charleston data scientist who had trained as a meteorologist, said his phone started pinging with third-party apps that didn't immediately indicate the alert was a test.

"It got my attention," the West Ashley resident said, "but I don't know where I'd go."

AccuWeather sent the tsunami push notification about 8:30 a.m. Tuesday, indicating there was a warning in effect for the next hour.

Shortly after that, the Weather Service clarified that there was no threat and that the routine monthly test message had been misinterpreted by "at least one private-sector weather company as an official tsunami warning."

The service said in a statement that it hadn't disseminated the test through any of its own communication channels.

The company acknowledged that the content of the alert made clear it wasn't real; it was titled, "TEST...Tsunami Message Number 1...TEST."

But the coding read by computers that help generate the alerts indicated it was a "real warning," AccuWeather said in a statement.

"Tsunami warnings are handled with the utmost concern by AccuWeather and it has sophisticated algorithms to scan the entire message, not just header words, as from the time of a warning to the actual event can be mere minutes," the company said. "AccuWeather was correct in reading the mistaken NWS codes embedded in the warning. The responsibility is on the NWS to properly and consistently code the messages."

An investigation found the routine monthly test message was properly coded, said agency spokeswoman Susan Buchanan. The Weather Service is "working with private sector companies to determine why some systems did not recognize the coding."

For those who received the alert, it wasn't clear the message was a test unless they clicked on the notification for more information.

Other third-party applications had similar problems, though with key differences. The Weather Channel said the message was posted as a warning on its apps and webpages but that it was not sent out as a push notification to mobile subscribers.

We have been receiving reports that an erroneous tsunami alert across New England. Please note there is NO TSUNAMI THREAT FOR New England.

AccuWeather alleged that Tuesday's ordeal was not the first time the Weather Service had incorrectly coded a test alert. The private forecaster said its chief executive, Barry Myers, penned a memo to the Weather Service three years ago, calling attention to another instance.

The alert apparently caused little stir on the Lowcountry's barrier islands, which could have been swamped by a tsunami.

On Folly Beach, one resident called Town Hall to ask about it, Administrator Spencer Wetmore said.

No one contacted officials on Isle of Palms, Sullivan's Island or Kiawah Island. Nobody called town officials on Dewees Island, where residents would have had to ride a ferry to Isle of Palms to evacuate, Administrator Catherine Kovacs said.

At Charleston County, spokesman Shawn Smetana said neither its Emergency Management Department nor 911 center received any calls about tsunamis.