WALTERBORO — The Post and Courier has filed a lawsuit against the Colleton County Sheriff's Office and State Law Enforcement Division, accusing the two agencies of violating the S.C. Freedom of Information Act.

Reporters Olivia Diaz and Jamie Lovegrove were denied access to public records generated by police investigating the June 7 slayings of Paul Murdaugh, 22, and his mother, Maggie, 52, at the family's home in Islandton, according to the complaint, which was filed June 17 in 14th Circuit Common Pleas Court in Walterboro.

The Charleston newspaper seeks access to reports generated by the Sheriff's Office and SLED, as well as recordings of any 911 calls related to the case. 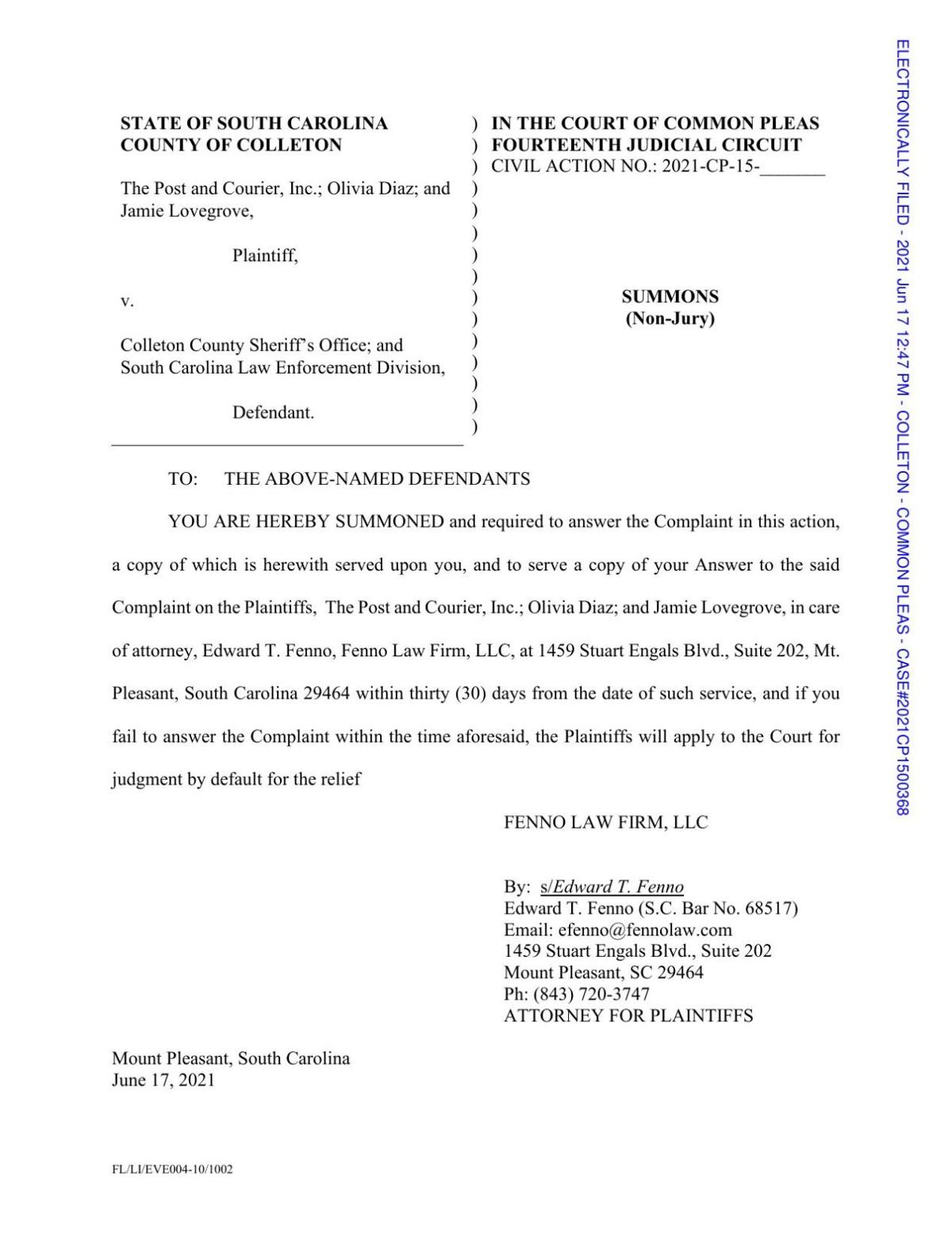 The organization also requests damages of attorneys' fees and costs.

Under the state's FOIA law, certain records, including incident reports or other reports that "disclose the nature, substance, and/or location of any crime or alleged crime," must be provided to members of the public if they are requested in person. The law does permit certain redactions, but the exemptions are narrowly tailored and must be applied on a line-by-line basis.

“South Carolina law is clear here: Any member of the public should be able to walk into the Colleton County Sheriff’s Office or SLED headquarters and gain access to these records," said Mitch Pugh, executive editor of The Post and Courier.

Neither SLED nor the Colleton County Sheriff's Office responded on June 17 to requests for comment about the lawsuit.

The investigation into the June 7 killings of Paul and Maggie Murdaugh, members of a prominent South Carolina law family, has attracted state and national attention.

John Marvin Murdaugh and Randolph “Randy” Murdaugh IV, Paul’s uncles and Maggie’s brothers-in-law, appeared on "Good Morning America" on June 17 to ask for the public's help in solving the case. They also revealed that Paul Murdaugh received threats from strangers before the deaths.

Alex Murdaugh called 911 at 10:07 p.m. to report the deaths of his son and wife. Sheriff's deputies dispatched to the scene found the mother and son dead of multiple gunshot wounds outside the family's residence at 4147 Moselle Road.

Despite the public interest, law enforcement officials have released scant details about the case, and denied formal requests for records under the state's FOIA law.

According to the lawsuit, Diaz visited the Sheriff's Office on June 9 to request the incident report and any supplemental reports generated as part of the investigation. The reporter was provided a one-line incident report, which provided only the barest details about the crime.

Questions abound in SC Murdaugh killing. Among them: Should prosecutor step aside?

Diaz said she respected the needs of the investigation but that the records were public under the state FOIA law. She offered to sit in the waiting area while the reports were redacted, if any redactions were appropriate.

Jason Chapman, captain of criminal investigations for the office, then came out and told Diaz that the records would need to be provided by SLED, since the Sheriff's Office recused itself in the investigation, the lawsuit contends.

The following day, Lovegrove attempted to request the supplemental reports at SLED's headquarters in Columbia. Lovegrove, a politics reporter, was denied entry into the building, according to the lawsuit.

Pugh, the paper's executive editor, said this was not the first time local agencies and SLED have tried to withhold public information by claiming release of the information would hinder the investigation, an overly broad exemption.

"The public understands some information may need to be withheld," he said. "But in the absence of information, rumor and gossip spread like wildfire, which is detrimental to law enforcement and the public. We hope this litigation will help these public agencies better understand their duties under the Freedom of Information Act.”

The Post and Courier sent a letter June 10 to SLED Chief Mark Keel warning him his agency is violating FOIA law.

Keel did not respond to that letter.

Hiding public information in supplemental reports has become commonplace among some area law enforcement agencies over the past several years, particularly when it comes to high-profile murders, rapes and robberies.

But such information was made public by the Legislature to help people make informed decisions about safety in their communities and how law enforcement uses their tax money.

State lawmakers, in fact, changed the Freedom of Information Act in 1998 to make clear that supplemental reports also are public records, not reservoirs of hidden facts. The amended law requires police to release all reports detailing the nature, substance and location of crimes.

In the Murdaugh case, state and county law enforcement officials have said there is no immediate threat to the public, yet no suspects have been named or arrests made. That has left residents confused and on edge, with rumors spreading quickly to fill the void in official information, The Post and Courier's lawsuit contends.

Some police departments have moved away from such secretive tactics.

In 2012, Charleston police caught flak for hiding crime details in supplemental reports that they refused to release to the public. City officials insisted there was no policy to do so, but then a memo surfaced in which a top commander instructed officers on how and what to hide. He even erroneously suggested that supplemental reports can be withheld from the public until investigations are completed.

The city’s police chief vowed to do better, and he did. The department now provides both incident and supplemental reports upon request, generally redacting only personal information such as Social Security numbers or highly sensitive information that could impact a prospective arrest. Most major law enforcement agencies in the Charleston area have taken a similar stance.