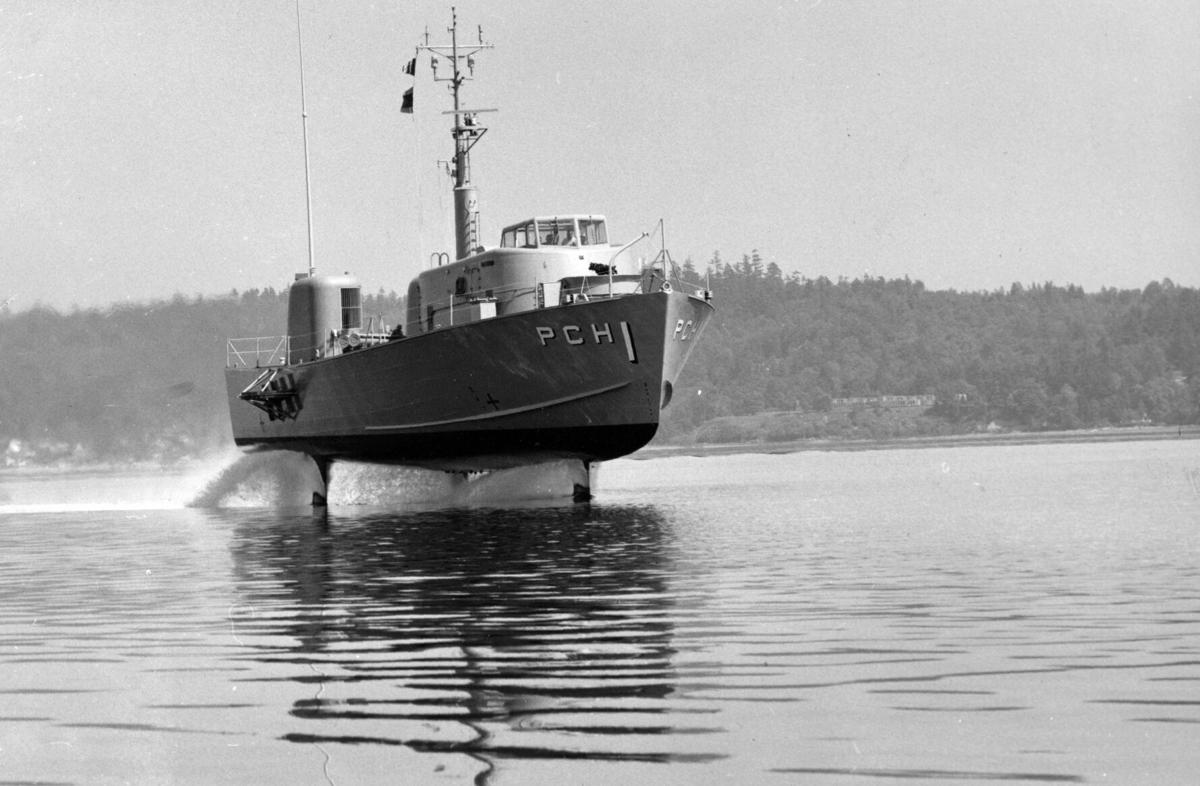 The High Point, a 110-ton Boeing-built hydrofoil capable of speeds of more than 45 knots, makes a long test run in the Puget Sound on Oct. 28, 1963. Naval History & Heritage Command/Provided 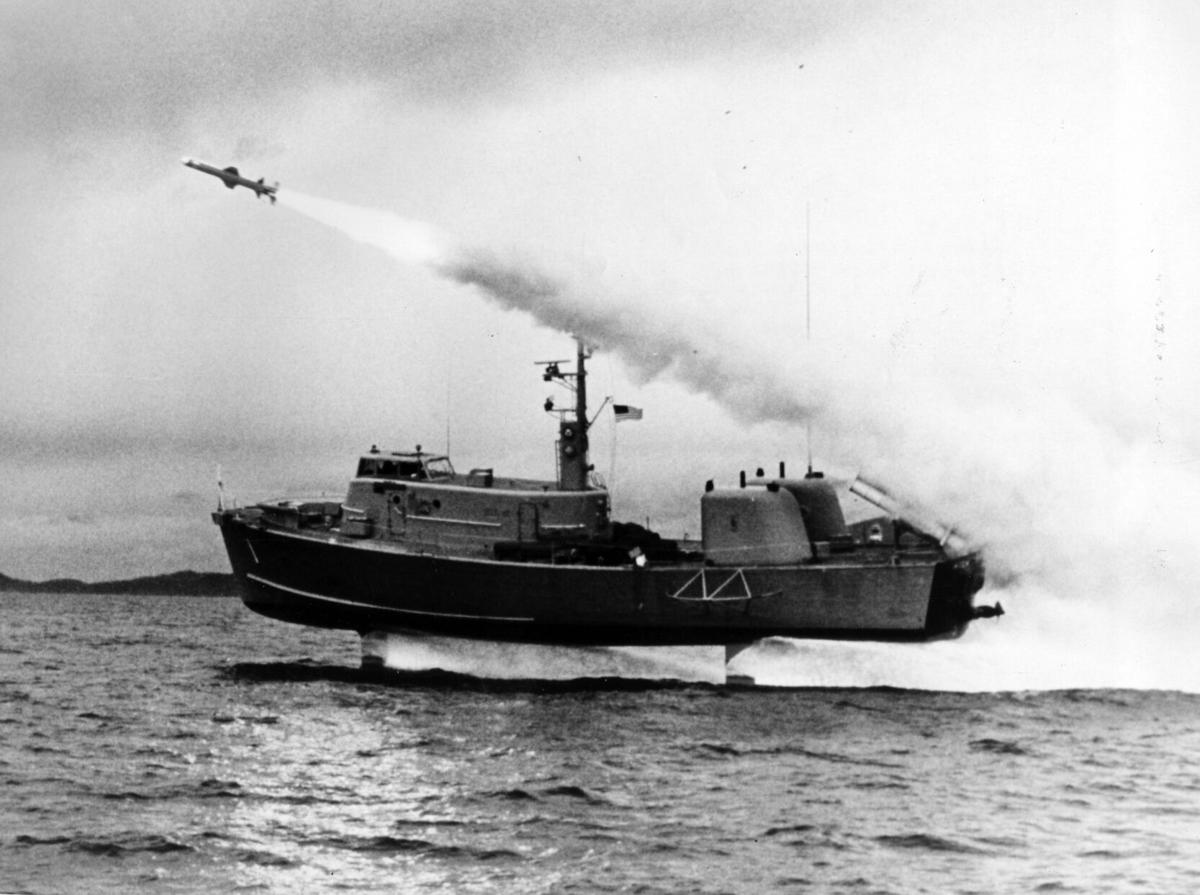 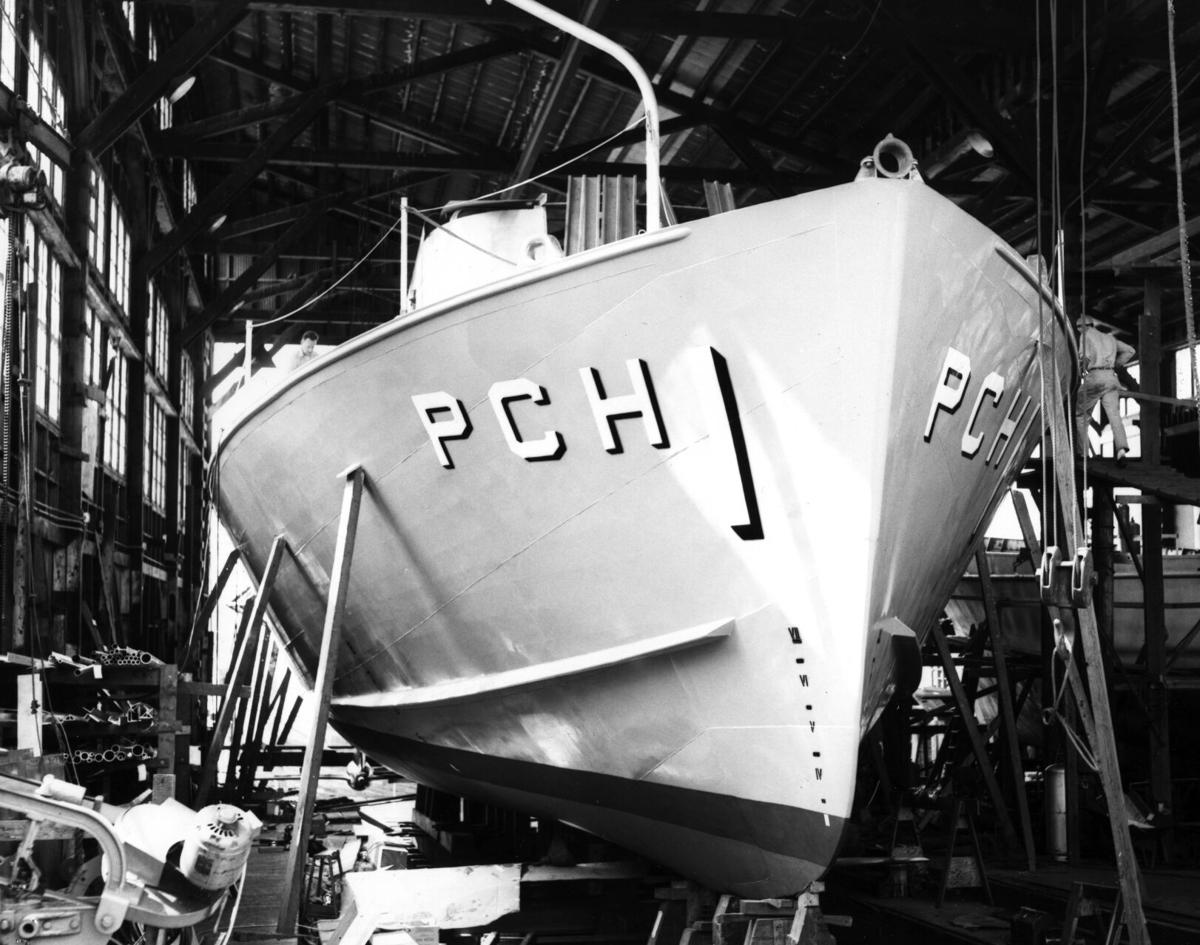 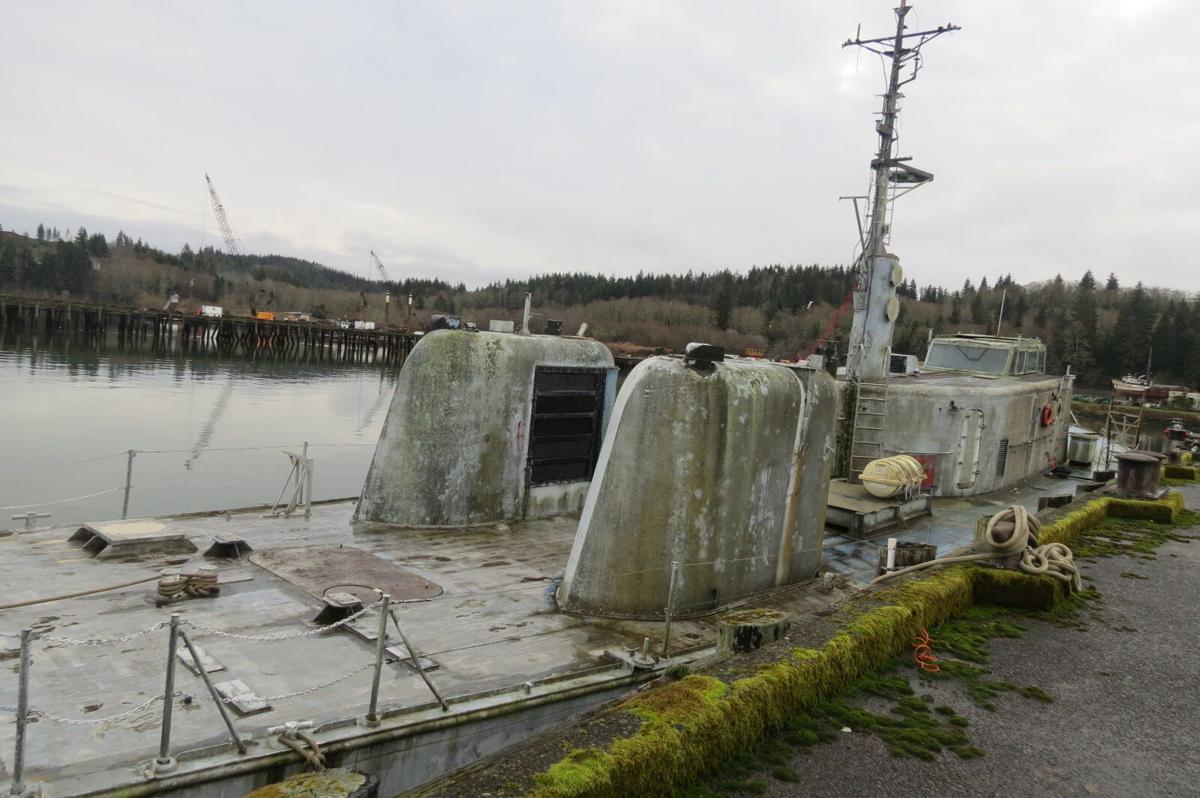 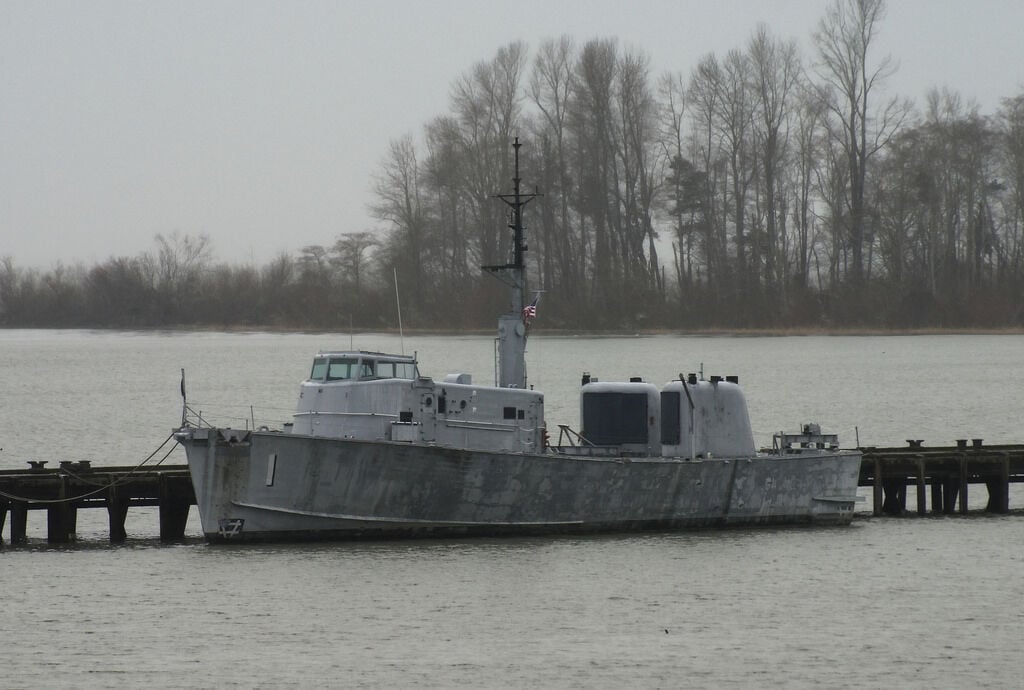 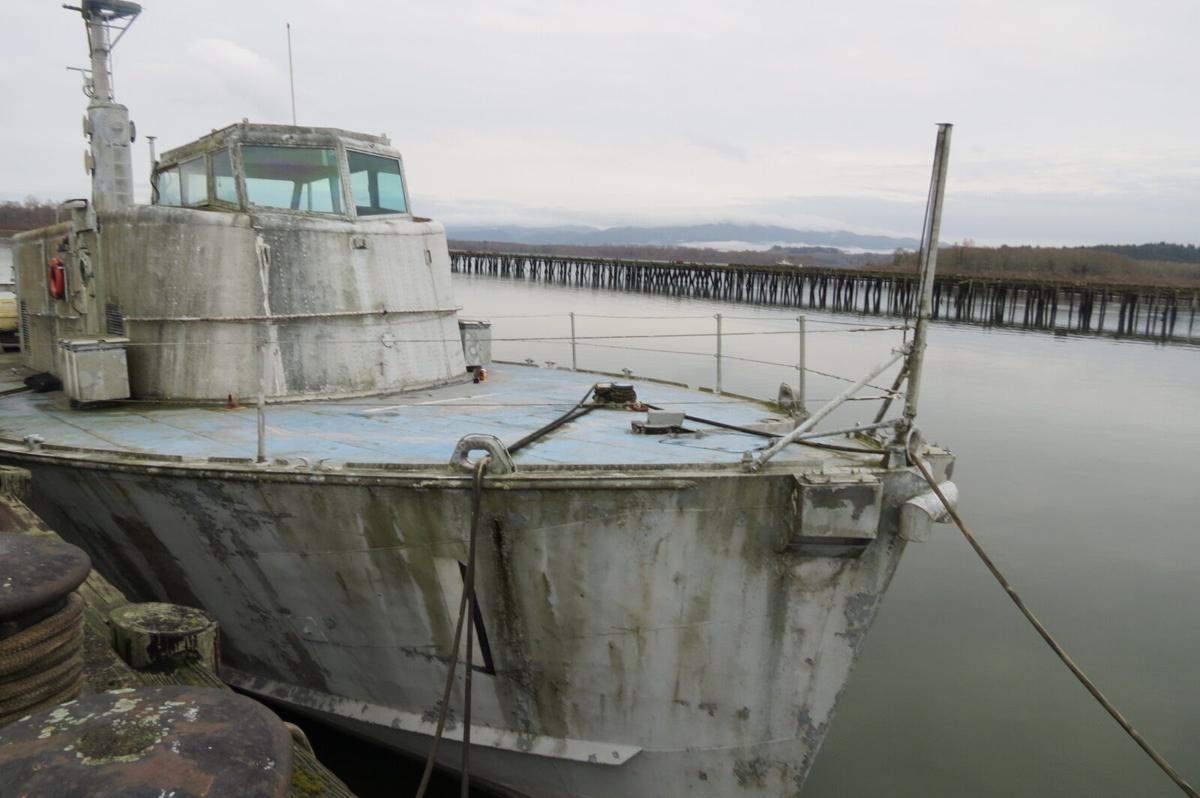 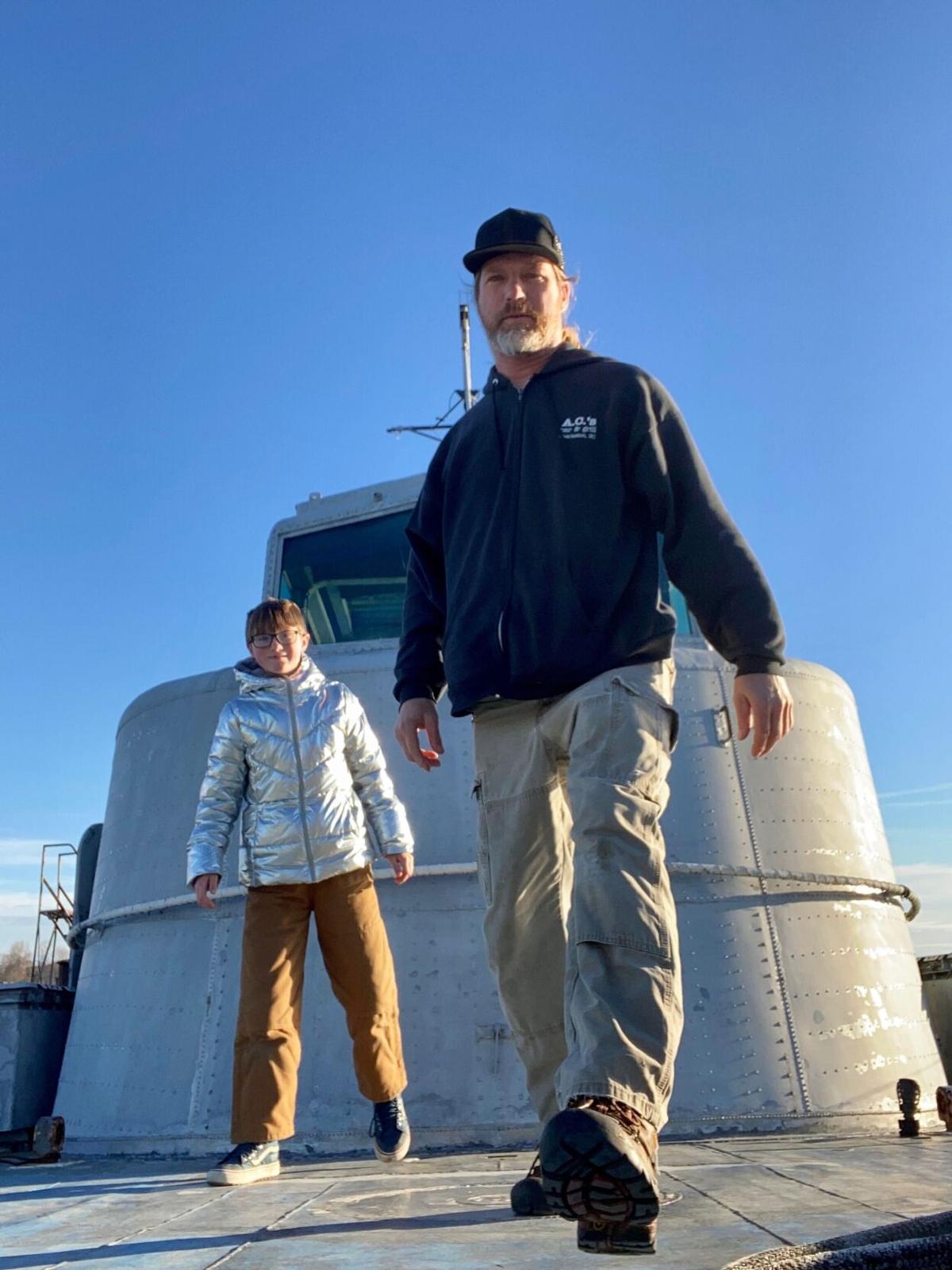 Neil Beach, 45, and his son Elias Beach, 11,  on the deck of the High Point in Astoria, Ore. Provided/Neil Beach.

The High Point, a 110-ton Boeing-built hydrofoil capable of speeds of more than 45 knots, makes a long test run in the Puget Sound on Oct. 28, 1963. Naval History & Heritage Command/Provided

When the Navy's experimental vessel the High Point was launched into the ocean in August 1962, it was considered a modern military marvel.

Developed by Boeing for $2.8 million — worth about $23 million in today's Pentagon dollars — the revolutionary hydrofoil boat's distinct fins would glide on the water at a top speed of about 55 mph to chase down submarines and enemy ships.

But it lived a short life. By the 1980s, the High Point had been stricken from the Naval Vessel Register after an engine explosion rendered it too costly to replace. It had never seen combat.

The ship oddity fell into disrepair. A tinkerer in Astoria, Ore., bought it in the 2000s with a pipe dream of restoring it. But maintenance costs became too much and it was left in the water collecting barnacles on the West Coast.

A boat that once symbolized the future of sea warfare became a decaying relic of the past.

But when Charleston resident Neil Beach saw it for sale online, he felt a calling to buy the ship with the hope of making the High Point seaworthy again.

The story picks up when the son of the 45-year-old carpenter from James Island saw a listing for the High Point online in November. Eleven-year-old Elias Beach shared an affinity for military and Navy history, just like the elder Beach did at a young age.

The High Point had been listed online at Popyachts.com, an auction-style website where boat owners can post vessels for sale.

"He saw the listing and showed it to me," Beach told The Post and Courier. "But it seemed a little out of my range. Basically, it was sitting here in Oregon and it wasn't going to get fixed. So, I wondered if the owners would negotiate."

During the summer, Beach took his three kids out to the West Coast where they took a look. The High Point was docked in the Columbia River. It was worse for wear.

There were 8 inches of water in the bilge. The gauges in the cockpit needed to be replaced. The internal diesel engine needed new hydraulics to run.

But the Boeing manufacturing held up. The 155-foot aircraft-grade aluminum hull was intact under the piles of moss and barnacles that had built up on the ship.

Faint lettering that read "U.S.S. High Point" — named for city in Piedmont region of North Carolina — was still stenciled on the stern of the boat.

The vessel came with a paternal pedigree that had been instrumental for research and development of hydrofoil boats. Everything from the yachts in the America's Cup Regatta to modern surfboards and their fins can trace their technology and world-class speed back to the High Point.

Hydrofoil technology makes boats more maneuverable and helps with quick acceleration. While similar ships had been created before, the High Point was the first military patrol craft to take advantage of it.

The Navy strategy was for the High Point, and its crew of 13 men, to quickly glide toward submarines and strike them before they submerged off the coast. Despite having a displacement of 110 tons, the hydrofoils would help the ship race toward targets at breakneck speed.

Influenced by his son, Beach made an offer.

Hal Palmer was the broker who sold the High Point to Beach. He said the previous owner's hopes to restore it followed the path of most lofty projects when reality took over.

"The previous owners ran out of money, ran out of time, and buyers began to fizzle out," Palmer said. “It attracted a lot of a dreamers, but nobody took it seriously until Mr. Beach came along."

Many of Beach's relatives were in the military and growing up around Charleston gave Beach an appreciation for Navy culture.

"I would play with plastic Army men as a kid and growing up in Charleston — with all the forts, cannons and the Yorktown — had a big influence on me," Beach said.

While he got the High Point for a bargain, bringing it back to what it once was will still require a lot of man hours and even more money.

Since August, Beach has been driving from James Island to the Tongue Point Shipyard in Oregon one week a month with his son.

Beach and son get up around 4 a.m. West Coast time each morning. Elias does remote classes at Harborview Elementary School from the sailor's quarters of the High Point. When he wraps up school around noon, he gets to work with his dad.

Beach said dockworkers at the shipyard have seen the ship decay for nearly two decades.

The carpenter knows he has got his work cut out for him. But he's no stranger to big projects. He said he's restored countless historic homes in downtown Charleston and even worked on a historic wooden boat in Charleston Harbor.

"How do you eat an elephant? One bite at a time," Beach said.

He pumped the standing water out of the ship. He brushed away cobwebs and chiseled away debris. He consulted some of the dockworkers and shipbuilders in Oregon and got the diesel engine running again.

After the dock owner heard the hum of the motor for the first time in years, he cut Beach a deal. He let Beach and his son stay on the boat and wouldn't charge them each month to have it tied up. It'll help them save money and put more of it back into restoring the High Point.

Beach doesn't know when the restoration will be finished or where he plans to take it when the boat is seaworthy. But, for now, he's just enjoying the process.

Getting the crew back together: Former Charleston Naval Shipyard employees will reunite

"Five years from now, I could be in the Sea of Cortez on the High Point. It could be driving around Charleston Harbor giving tours. It's unclear, but we're chipping away," Beach said.

While he hopes to tour it around the coast, and maybe even bring it back to Charleston to share with maritime history experts in the area, he's just happy to spend time with his son.

"Him and I are turning lemons into lemonade," Beach said. "When will we ever get to do something like this again?"