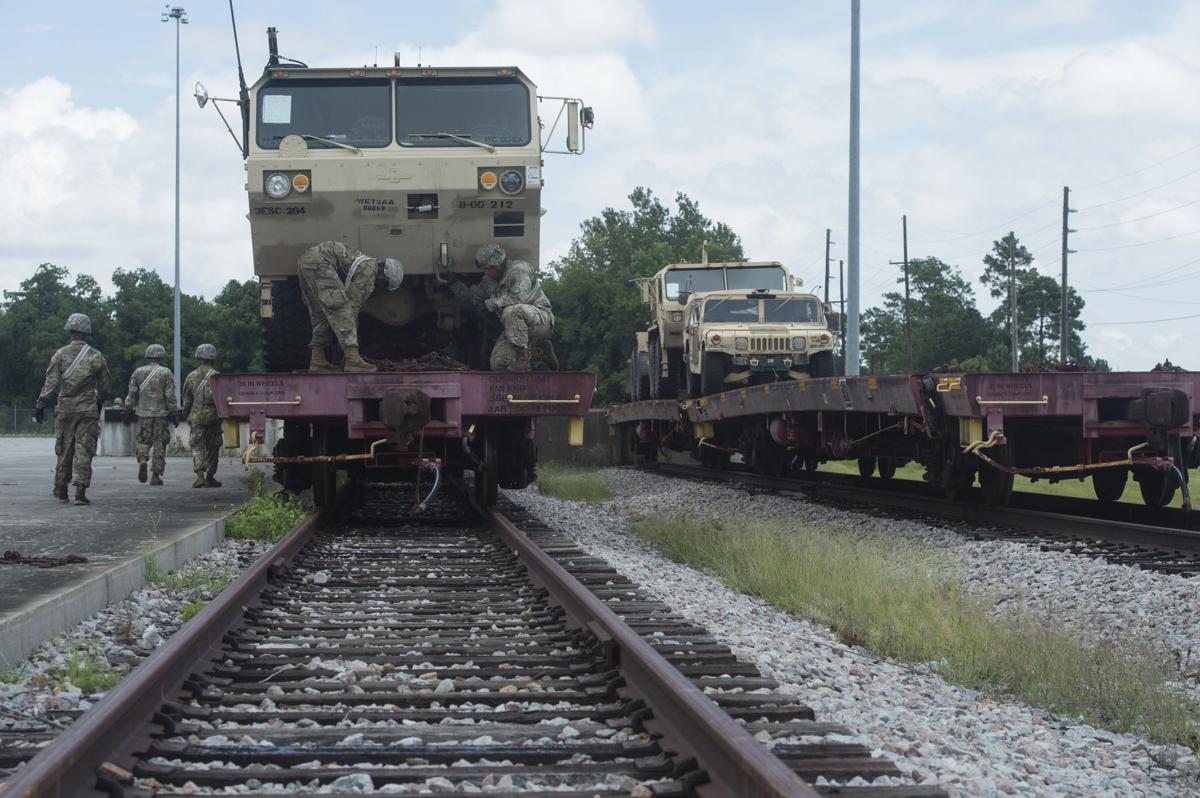 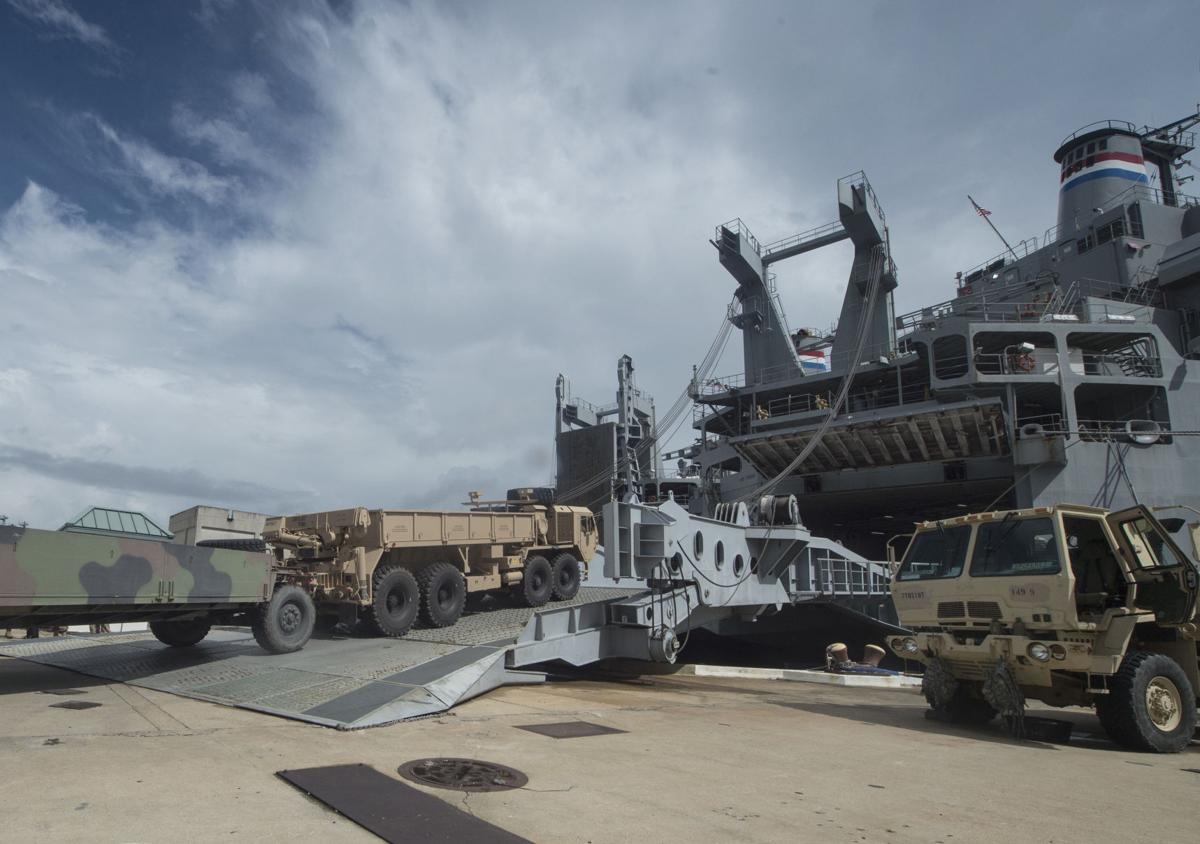 U.S. Army vehicles and assets are moved onto a vessel during Exercise Dragon Lifeline on July 31, 2018, at the Federal Law Enforcement Training Center in Charleston. The 841st Transportation Battalion hosted the exercise, facilitating training for Soldiers assigned to Fort Bragg, N.C., and Fort Eustis, Va. The exercise was designed to train participants in the planning and processes of rail, convoy, port and vessel operations. (Photo by Tech. Sgt. Christopher Hubenthal) 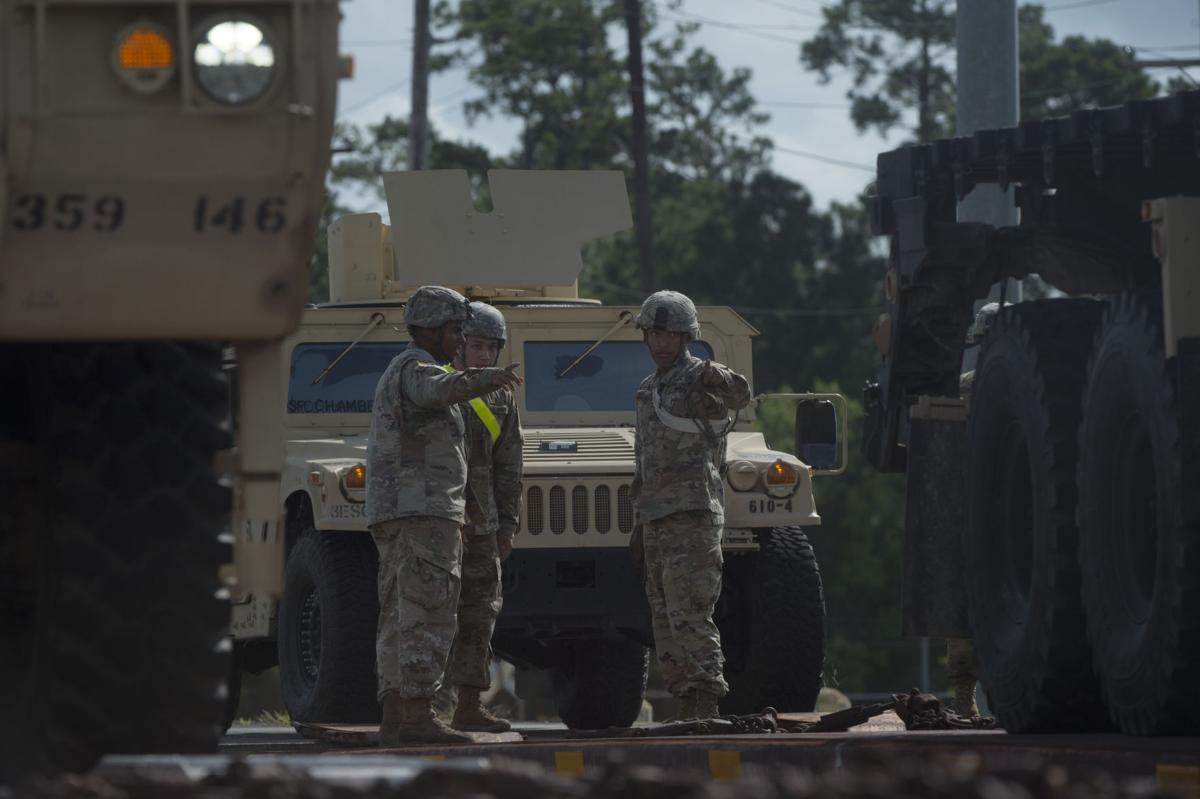 U.S. Army Soldiers prepare to move vehicles during rail operations as part of Exercise Dragon Lifeline on Aug. 1, 2018, at Joint Base Charleston’s Naval Weapons Station. The 841st Transportation Battalion hosted the exercise, facilitating training for Soldiers assigned to Fort Bragg, N.C., and Fort Eustis, Va. The exercise was designed to train participants in the planning and processes of rail, convoy, port and vessel operations. (Photo by Tech. Sgt. Christopher Hubenthal)

Residents should not be surprised to find military airplanes, boats and vehicles along Charleston's highways, seaports, airspace and railways this week.

A massive military exercise, dubbed "Dragon Lifeline," will involve more than 200 soldiers from more than 114 job fields, as well as dozens of Humvees, ships and airplanes arriving in the Charleston area. Between Monday and Thursday, the Army and Air Force will be fully prepared for one of their largest mock operations.

Officials from Fort Bragg in North Carolina were not able to provide an exact price tag on the operation's cost.

"Currently, the figure fluctuates due to mission requirements and changes," Maj. Latisha Reeder from Fort Bragg said. "It does carry a cost and most likely a hefty cost; however, a ready force is a responsible force."

Starting Monday, a massive convoy of soldiers from Fort Bragg will travel down the highway, more than 200 miles, to Joint Base Charleston with trailers, refrigeration units and cargo containers in tow.

On Tuesday, the soldiers will unload and reload the equipment at Charleston's ports and railways near the Naval Weapons Station. On Wednesday, C-17 planes from Charleston will fly the equipment back to Fort Bragg. The final day of the operation will involve shipping equipment by boat to Joint Base Langley-Eustis in Virginia.

Charleston has been a part of a similar operation before. In 2018, between July 30 and Aug. 3, soldiers utilized the rails around the Naval Weapons Station to practice loading and unloading equipment. Last year, about 127 vehicles trekked from Bragg to Joint Base Charleston, according to the Fayetteville Observer. The convoy reportedly stopped at National Guard armories in Dillon and Manning to refuel.

Rick Berger, a military research fellow at the American Enterprise Institute, said exercises such as the one happening in Charleston next week indicate that the military is prepping in case there is an overseas conflict.

"It sounds like they're doing dry runs for Europe," Burger said. "In any scenario, we have to flow people through all sorts of ways — roads, rails, ports, you name it. The Army has been doing more and more of this. They've been getting the muscle memory going."

The massive operation comes at a time when the U.S. Army is fighting for funding to help with its readiness. Earlier this month, the Army asked congressional defense committees to approve $157 million more for its aviation readiness programs, according to an omnibus reprogramming request sent to Capitol Hill on June 25.

"The U.S. Army's primary focus is readiness," Reeder said. "It is imperative that we remain ready and focused to win our nations wars no matter where or when we are called upon."

The U.S. Air Force may allow plane mechanics to wear shorts at some of the more humid bases across the country, including Joint Base Charleston. But the design of the shorts, a style less like "Top Gun" and more like middle-aged Dad at a neighborhood cookout, have caused Airmen to react poorly to the idea online.