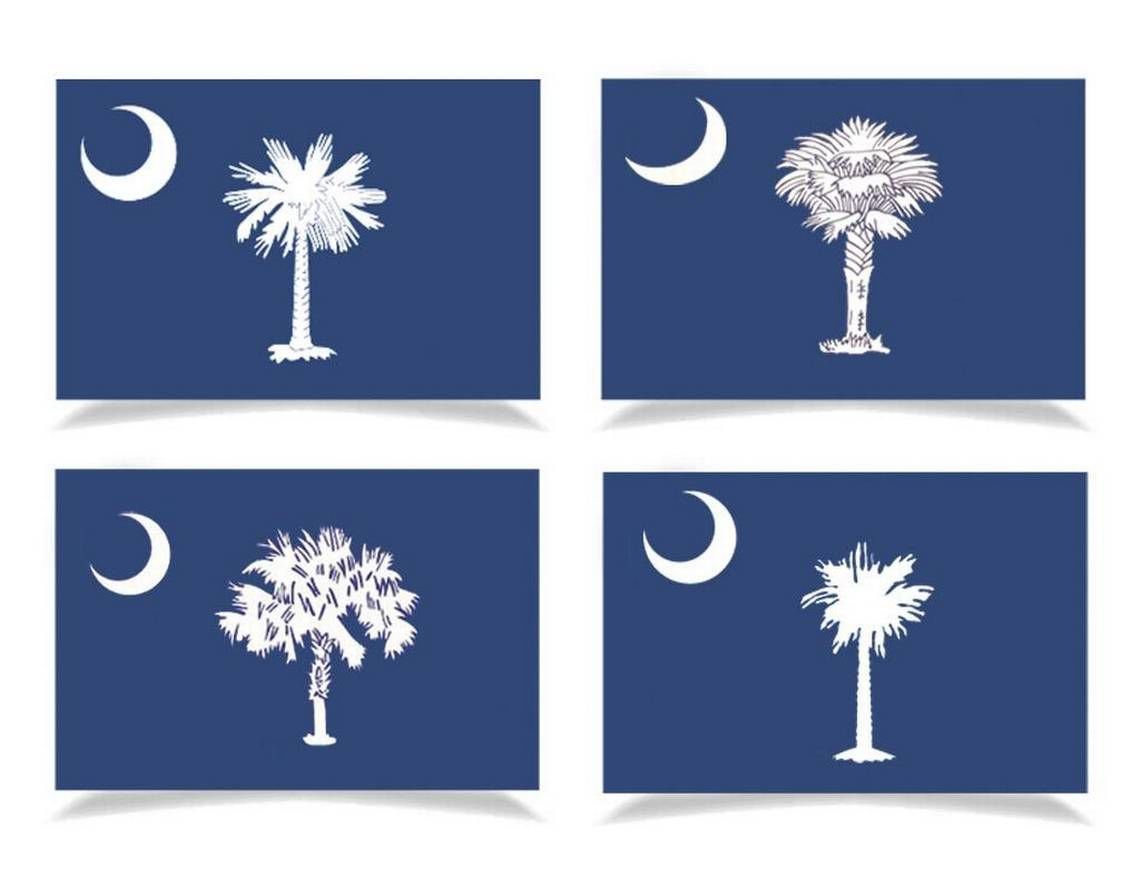 Without an official template, several version of the South Carolina flag are sold and displayed across the state. Here are some of the most common. Provided 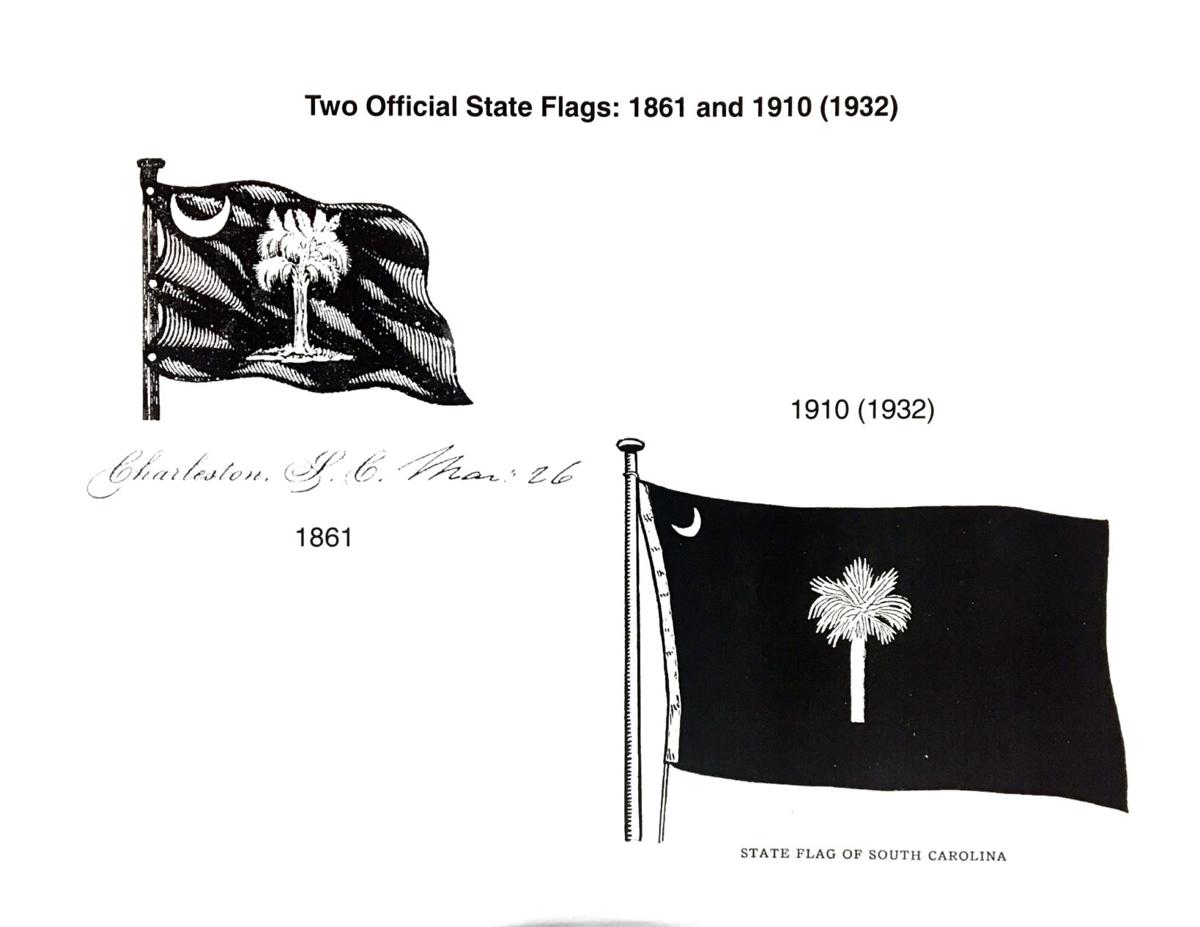 South Carolina's only two official flags include one from 1861 (left) after the state seceded and another from 1910, a design approved by the General Assembly. That flag design was repealed in 1940. South Carolina law currently has no official design description for the state flag, though that may change soon.

When Ellen Heyward Jervey of Charleston died in November 1967, there was little mention of the unique role she played in South Carolina’s history.

Her contribution — specifically her help in designing the palmetto tree for South Carolina’s second and most recent official state flag — had been largely lost to time.

It only resurfaced recently because the state began discussing what exactly its official flag should look like.

State Archives and History Director Dr. Eric Emerson will give a lecture on the state flag's history Tuesday in Columbia.

The lecture is free to members of the South Carolina Archives & History Foundation. It's $10 for others ($5 for students).

As part of that effort, Eric Emerson, director of the S.C. Archives and History Department, dug into the history of the most recent official version, which state lawmakers approved in 1910 and later voided in 1940.

He began with Wylma Wates' history, "A flag worthy of your state and people," but then stumbled upon correspondence that Wates had not seen during her research, specifically letters between Alexander S. Salley — Emerson's predecessor who has been credited with the flag design — and an educated Charleston woman with an artistic flair.

"The most fascinating part was correspondence between him and Miss Jervey," Emerson said. "It's funny to read. There’s nothing smooth about him at all. He just can’t help himself."

Emerson, who is giving a lecture about the flag's origins Tuesday in Columbia, said their letters go back and forth about her help in designing the flag's most prominent feature: its palmetto tree. Jervey writes about studying palmettos growing outside her Charleston home at 71 Rutledge Ave. and also volunteers to go to the Isle of Palms for research.

But their letters also imply that Salley, a bachelor, was clumsily courting Jervey.

"He writes, 'If you’re successful with this, I’ll let you move your trunk into my house,' which is a sort of ham-handed way of proposing," Emerson said.

The state's first flags with the palmetto tree and crescent design were approved as South Carolina seceded ahead of the Civil War. This version appears on letterheads in 1861, and an 1865 photo also shows a flag captured by Union troops.

Between the Civil War and 1910, many state residents forgot what the flag looked like, triggering Salley's work on a new official version. He sought help from Clemson's textiles department and Jervy.

Emerson said Salley later would brag that the flag was all his doing, but Jervey's work did influence the palmetto tree. Clemson, which the Legislature instructed to manufacture the flag, paid Jervey $5 for her work, about $130 in today's world.

"He says, 'I used your sketch, made a few changes and that’s what Clemson produced,' ” Emerson said. "He then said, 'It would have been $10 if you had remained patient with me.' It’s one more jerk thing said by Salley."

Jervey would later become the librarian at The College of Charleston until 1949. The News and Courier reported her retirement on the same day, on the same page and in the same column as it noted Salley's departure as state historian.

Their version of the flag already had been repealed by the General Assembly around 1940, not because of its design but as part of rescinding a requirement that Clemson manufacture the flags at cost, Emerson said.

Since then, the state has had no formal template: Its current flags can feature palmetto trees with different tops and trunks, and the crescent, while angled, comes in different thicknesses. State agencies may order flags from five different vendors.

Even with the variations, the South Carolina flag is considered one of the nation's best, with its simple design and historic imagery drawn from the July 28, 1776, Battle of Sullivan's Island. (Patriot troops, who wore a crescent on their hats, thwarted a planned invasion partly because their fort on Sullivan's Island was made of palmetto logs that weren't damaged by cannon fire from British ships.)

Scott Malyerck, a Newberry political consultant, reached out to Emerson during his recent effort to get the state to settle on an official design.

Despite their efforts, getting a new official version of the flag has been no slam dunk.

"I guess I opened a can of worms," Malyerck said. "I thought this could be handled quickly."

As the Legislature finishes work on the budget in the coming weeks, it still could authorize a state flag study committee that would work on the issue and could recommend an official version as early as next year.