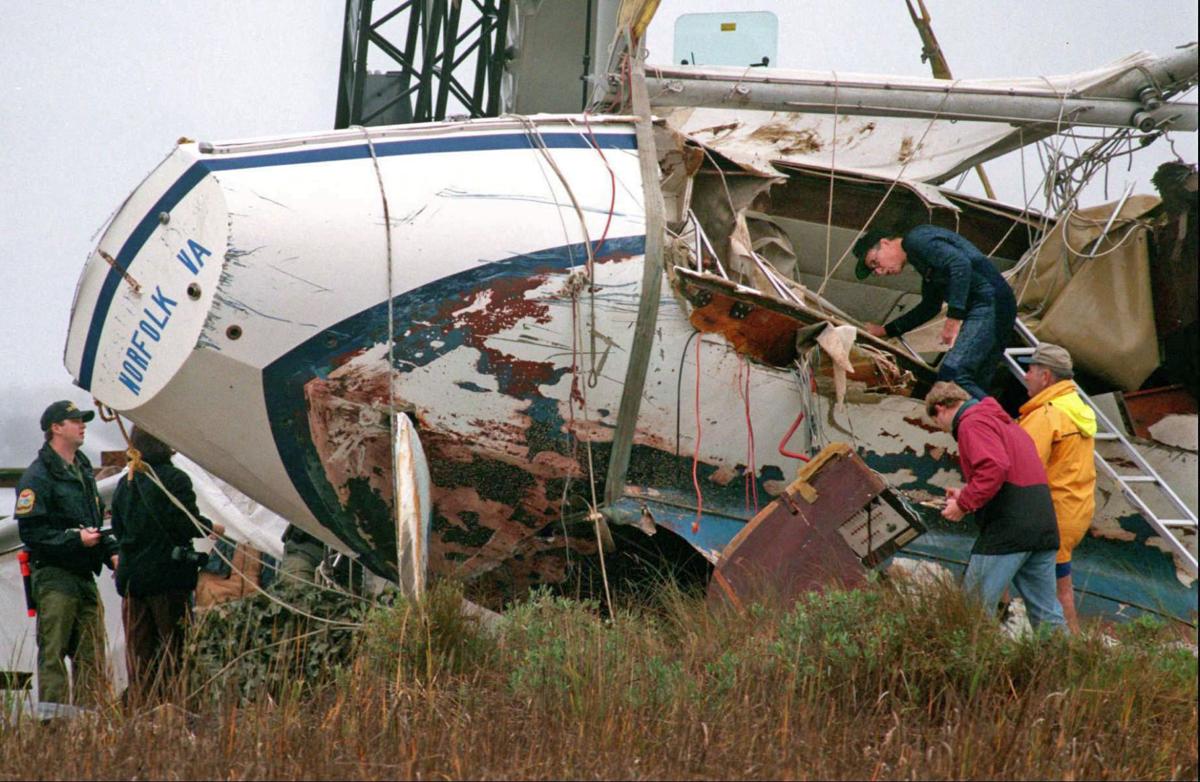 Officials inspect the 34-foot sailboat Morning Dew on Jan. 8, 1998 that sank Dec. 29, 1997 near the jetties off Sullivan's Island. The boat was raised and towed to an area near the old Pitt Street bridge in Mount Pleasant, S.C. Families who alleged the Coast Guard botched the rescue of Morning Dew, leading to the death of four people in a sailboat wreck, were awarded almost $19 million in damages from the federal government in 2001. File/Matthew Fortner/Staff 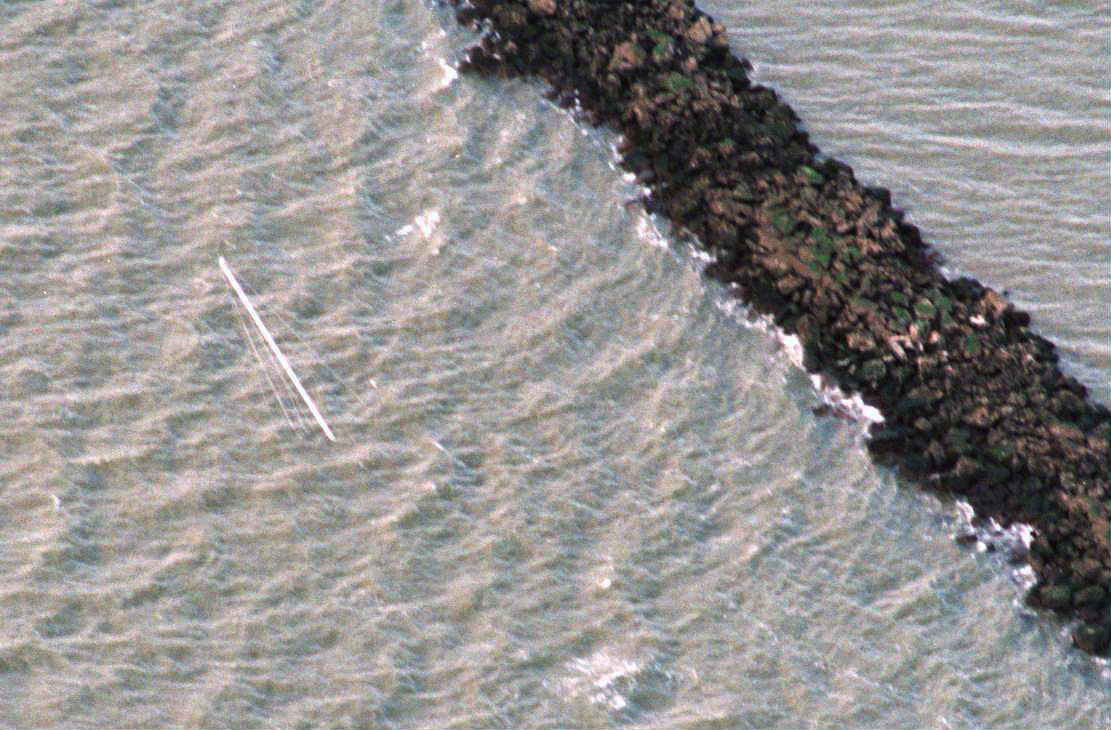 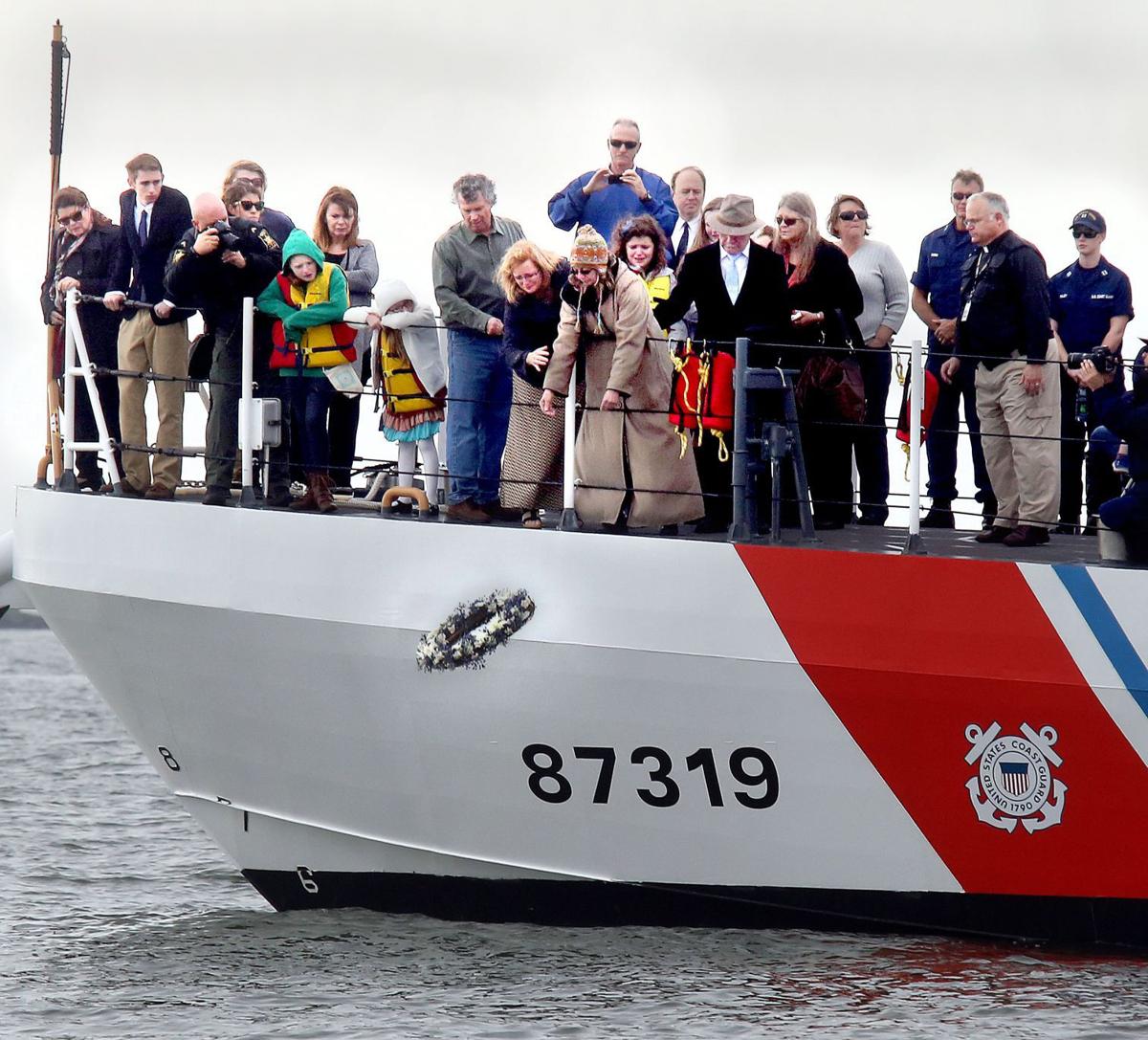 Members of the Cornett and Hurd families dropped four wreaths from the Coast Guard cutter Yellowfin into the water just south of the north jetty. File/Brad Nettles/Staff 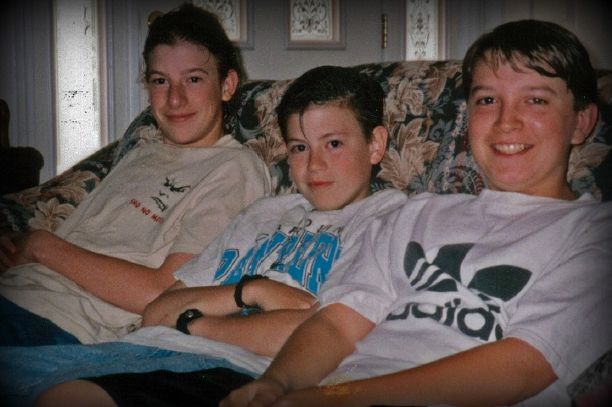 From left, Paul Cornett, 16, Bobby Lee Hurd Jr., 14, and Daniel Cornett, 13. The photo was taken around Christmas time in 1997 before a sailboat trip a few days later that ended in their deaths, along with Michael Cornett - Paul and Daniel's dad and Hurd's uncle. 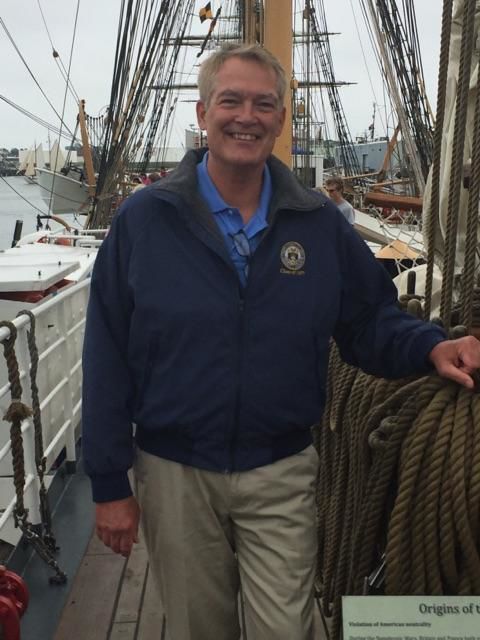 "May ... Mayday," a desperate plea shouted over the crackling static. "U.S. Coast Guard, come in."

The Morning Dew sailboat had crashed into one of the rocky jetties at the mouth of Charleston Harbor, and now the 34-foot sloop was struggling against the waves.

It was Dec. 29, 1997, and this was not the winter voyage 49-year-old Michael Cornett had imagined when he set sail the day after Christmas with his two sons, 16-year-old Paul, 13-year-old Daniel, and their 14-year-old cousin Bobby Lee Hurd Jr.

His plan was to take the Intracoastal Waterway from South Carolina to Florida, but now they were off course, in open ocean and taking on water after their collision with the jagged rocks tore a massive hole into the boat's fiberglass hull.

The youngest passenger, Daniel, was the one who radioed for help as rain and wind whipped across the cold waters of the Atlantic and the overcast sky blocked out the stars.

When Daniel's distress call came over the emergency channel, the watchstander at the Coast Guard Sector Charleston Command Center was away from his desk waiting for coffee.

The Morning Dew was waiting to be saved, but help never came.

The incident remains one of Charleston's most tragic sea accidents, not only for the loss of life incurred but also for the procedural missteps and human error it revealed.

The watchstander on duty that night tried to return the call but got no reply. Without replaying the call, he assumed it was a routine reach out for information or a radio check.

Four hours later, a crewman on an inbound container ship reported hearing screams coming from the water and a harbor pilot notified the Coast Guard. Again, no rescue mission was launched.

The Coast Guard did not dispatch its own units until after 11 a.m. that morning, and that was only after the body of one of the teenage boys had been found by a couple on Sullivan's Island.

The watchstander said he ignored Daniel's 2:17 a.m. mayday call because it was indecipherable.

"All I heard was 'U.S. Coast Guard,'" the watchman said when he was questioned later by the National Transportation Safety Board. "We get lots of calls for U.S. Coast Guard, constantly, that are nothing."

But on that night almost 21 years ago, Libby Cornett lost everything.

Beginning of the errors

Cornett was waiting for her husband, Michael, and the boys to arrive in Florida when she got a call from her sister's pastor.

"He asked me if I had heard of any more bodies washing up," Cornett said this week, recalling how she first learned something had gone wrong on the Morning Dew. "They had not been identified yet, and I just kept thinking, 'Who is it?' 'Do I still have one left?'"

The boys survived the wreck but died trying to make it to shore at Sullivan's Island. Evidence suggests Cornett's husband likely fell overboard and drowned in the 50-degree waters when the sailboat hit the jetties.

"It really makes you hurt for the families knowing what they had to go through and knowing that we did have the opportunity to help," said Capt. John Reed, commander of Sector Charleston.

The Morning Dew incident would trigger a nationwide review of Coast Guard policies, and several members of Congress requested the National Transportation Safety Board launch an investigation into what happened.

The board's findings were vast and showed mistakes by all involved. Its investigation found Michael Cornett's failure "to adequately assess, prepare for and respond to the known risks" of sailing in the open ocean was the probable cause of the sailboat wreck.

But it also determined the Coast Guard's response was "substandard."

The board made 16 safety recommendations to the Coast Guard. Additionally, the Coast Guard did an internal review, bought new equipment and tightened its search and rescue procedures.

Sean Shrum, now the lead controller at the Sector Charleston command center, was serving in the Coast Guard in Charleston when the Morning Dew wrecked.

Though he was not a part of the search and rescue operation at the time, he knew those who were. He remembers the city's visceral reaction at the time, especially when he left the house wearing his uniform.

"I could be pumping gas or going to store, and people would come up and say, 'Those people did not have to die. You let them die,'" he said. "Morning Dew is historic in Charleston. People always remember it."

New book on the disaster

He has spent the past 4½ years researching the Morning Dew accident to write a book about what happened, what it meant for the families, and ultimately what changes it brought to the Coast Guard.

His book "Lost in Charleston's Waves: The 1997 Morning Dew Tragedy​" will be published later this month.

Webster, a Coast Guard historian who oversaw more than 10,000 search and rescue cases when he served, has written three other books about maritime accidents along with one book about Coast Guard leaders. This will be the first time he is self-publishing.

The story of the Morning Dew, he explained, was one he always felt compelled to write.

While significant improvements have been made in the Coast Guard since the Morning Dew, Webster said there is one area that will always be a challenge.

"Normalcy bias is resident in all of us," he said, referring to the psychological state of denial that people enter when facing a disaster.

The term Shrum likes to use is simpler. "The thing we talk about all the time is don't be complacent," Shrum said.

A mother and wife moves on

When Libby Cornett first heard her son's desperate mayday call, it was March 17, 1998 — almost three months after the accident. His small voice shouting for help shattered how she thought her family had died. Hearing Daniel's desperation, Cornett said she had a gut feeling that something wasn't adding up.

In late March, she researched Coast Guard rescue protocol late into the night with friends and slowly realized that the Coast Guard had failed in its responsibilities.

Both the Cornett and Hurd families would file a lawsuit alleging the Coast Guard was negligent in its rescue response. A judge ruled in their favor, awarding the families almost $19 million.

"This tragedy was avoidable," U.S. District Judge David Norton wrote in his 64-page decision. "It was not an angry sea or cruel weather that impeded the Coast Guard's ability to rescue the ... Morning Dew's passengers."

For Cornett, the watchstander's inaction to her son's mayday call is something she still can't quite understand. She writes about her sorrow in the forward of Webster's book, along with the mistakes made by her husband and the Coast Guard.

The last time Cornett was in Charleston was four years ago, when the first public memorial for the Morning Dew tragedy was held at The Church of the Holy Cross on Sullivan's Island.

Before the service, she rode out to sea with the Coast Guard and 35 of her family members to the very jetties where her sons, husband and nephew had perished. They dropped four wreaths in the ocean in their memory, and said a prayer.

During the boat ride to the jetties that day, Cornett said she found herself imagining how her boys must have been feeling as they waited for help in the dark Atlantic waters.

Even now, she still struggles with the sea.

"It's hard to view the ocean or any large body of water as being tranquil and peaceful, the way it once was for me," Cornett said.

"I just see them," she said, her voice breaking as she remembered them:

Paul, her oldest son who she always thought looked more comfortable in the water than he did on land.

Daniel, her youngest who was enthralled by nature and any possibility of adventure.

Bobby Lee Hurd Jr., her nephew who was obsessed with all things baseball.

And Michael, her husband of 22 years who she always thought of as the man who could do everything.