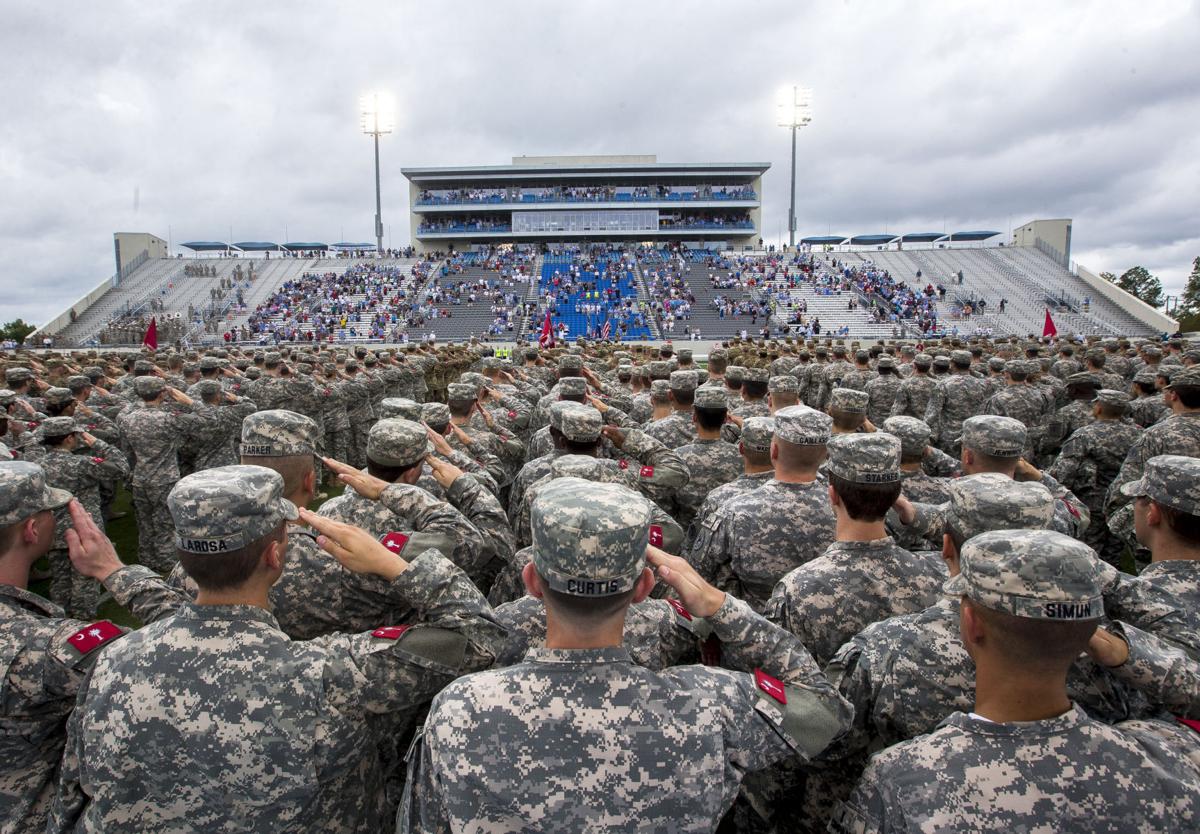 Cadets salute during the playing of the national anthem at the Citadel Bulldogs season opener against the Towson Tigers at Johnson Hagood Stadium on Saturday, Aug. 31, 2019 in Charleston. Towson won 28-21. File/Andrew J. Whitaker/Staff 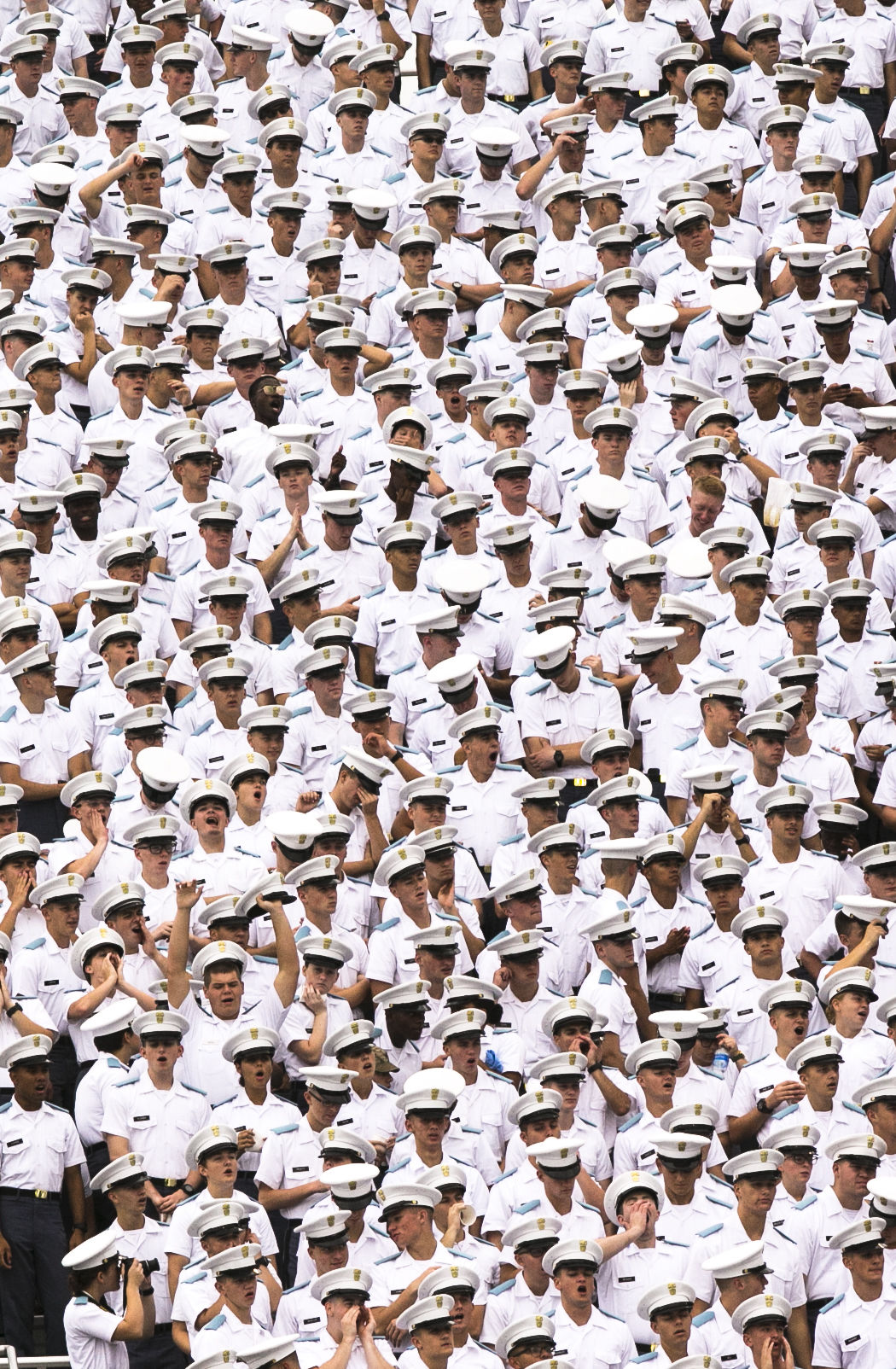 Citadel cadets watch from the stands during the Military Classic of the South between VMI and The Citadel on Saturday, Oct. 5, 2019 at Johnson Johnson Hagood Stadium in Charleston. VMI won 34-21. Andrew J. Whitaker/Staff

The Citadel, known across Charleston and beyond for its military history and tradition, produces hundreds of business, civic and political leaders every year and has become a networking powerhouse in the Palmetto State.

But compared to schools with similar military traditions, it doesn't produce as many commissioned officers in the armed services.

Founded in Charleston in 1842, The Citadel is one of only six senior military colleges in the country — private or public schools that require mandatory or voluntary military lifestyles. Historically, these schools were created to foster intense leadership training within a rigorous structure.

Other such schools include Virginia Military Institute, Norwich University, University of Northern Georgia, Virginia Tech and Texas A&M University. These schools are all different. But the majority send a larger percentage of their cadets to serve in the U.S. military as officers after graduation.

Here are the percentages of graduating cadets from senior military colleges that have either commissioned or plan to attend Officer Candidate School for the past five years, according to the Association of Military Colleges and Schools of the United States.

The Citadel has had between 27 percent and 36 percent of its cadets commissioned during the same period.

"The numbers are the numbers," Citadel spokesman Col. John Dorian said. "What we are focused on is our mission and our cadets' personal missions, whatever they may be."

Michael McDowell, a member of The Citadel's Advisory Board of the School of Humanities and Social Sciences from 2014 to 2018, said he was "surprised" to hear the statistics. He said The Citadel differs from the others, partly because of its location. Residents and people of influence know the school's name in the state, and many want to make use of it outside the military.

"Really, it’s a networking opportunity for Charlestonians who want to go into business, public service," McDowell said. "There’s a stronger cultural identification for the school within the city and the state.”

Serving in uniform or in a polo shirt

While the Charleston institution has seen a rise in civilians choosing to enroll in the school over the course of its history, The Citadel does not intend to change its marketing or messaging as being a premier military institution in the South.

“We have healthy rivalries with the other schools,” Dorian said. “We’re trying to pursue people that want a rigorous college experience for whatever leadership avenues you chose. The model that we have here has a great deal of mass appeal.”

The approach has worked. The Citadel has seen a steady increase in applicants over the past 10 years, going from 2,210 students applying in 2008 to nearly 3,000 applying this past fall.

Dorian said the school has changed significantly since he graduated, including the addition of more in-demand majors.

“The education that you get from here now is better than it ever was,” Dorian said. “There is much more technical acumen. We’re putting a large number of engineers into the area.”

Overall, The Citadel has been relatively consistent in its percentage of cadets that commission in the armed services. In times of global conflict, Citadel cadets have stepped up.

The highest percentage of cadets that commissioned during the past 70 years was in 1962, when 89 percent decided to become officers at the height of the Vietnam War.

“For the last 30 years, we have hovered around 30 percent,” Dorian said. “The only times we’ve gone very high have been in times of war.”

Senior military colleges vary in mission and appearance. Norwich University, in Northfield, Vermont, is private. Others are state funded in some manner or are a part of the state university education system.

VMI, often seen as the Citadel's primary academic, athletic and advertising rival, is the only one of the six that does not offer a civilian track. Anyone who enrolls in the school goes through the rigorous cadet lifestyle.

Stewart MacInnis, a spokesman for the VMI, said while every student goes through the trials of the cadet lifestyle, some opt not to commission in the armed services.

"Every student at VMI truly is a cadet," MacInnis said. "Some people come here intending to join the military. But this lifestyle also prepares them for civilian careers."

Providing an avenue for young men and women to commission into the U.S. military is just one element of senior military colleges. Col. Ray Rottman, the executive director of the Association of Military Colleges and Schools of the United States, said these colleges often provide a unique leadership experience for students.

"They graduate leaders of character," Rottman said. "Whether they are wearing a uniform, a suit or a polo shirt."

'An area of some concern'

There is a looming concern among military leaders that more men and women aren't fit for service in the armed forces.

According to 2017 Pentagon data, 71 percent of young Americans between 17 and 24 are ineligible to serve in the United States military. At least 59 percent of those men and women cannot serve because of health issues or inadequate physical fitness. At least 25 percent have not reached the proper education requirements. Ten percent have criminal charges.

Dorian said professors and scholars are not only aware of the rising epidemic of ineligibility, but they're also researching it extensively on campus.

"This is an area of some concern not just to the Citadel but also in regards to national security," Dorian said. "It's something we're looking at nationally. We want to make sure that the cadets not only have access to those physical fitness activities, but they're also required to start their morning with physical training."

All senior military colleges are not equal. Schools such as VMI, Norwich and the Citadel are predominately military focused. Others, such as Virginia Tech, Texas A&M and the University of Northern Georgia,  advertise and recruit primarily for students pursuing undergraduate degrees, but they still have a standing corps of cadets.

Despite the majority of senior military colleges initially being founded with the notion of contributing to the armed services, Dorian said the rewards of these college experiences today surpass commissioning in the military.

“That education comes with strength, structure, commodity,” Dorian said. “The cadets that come here live a very Spartan lifestyle. But the rewards that come from living that life are undeniable.”