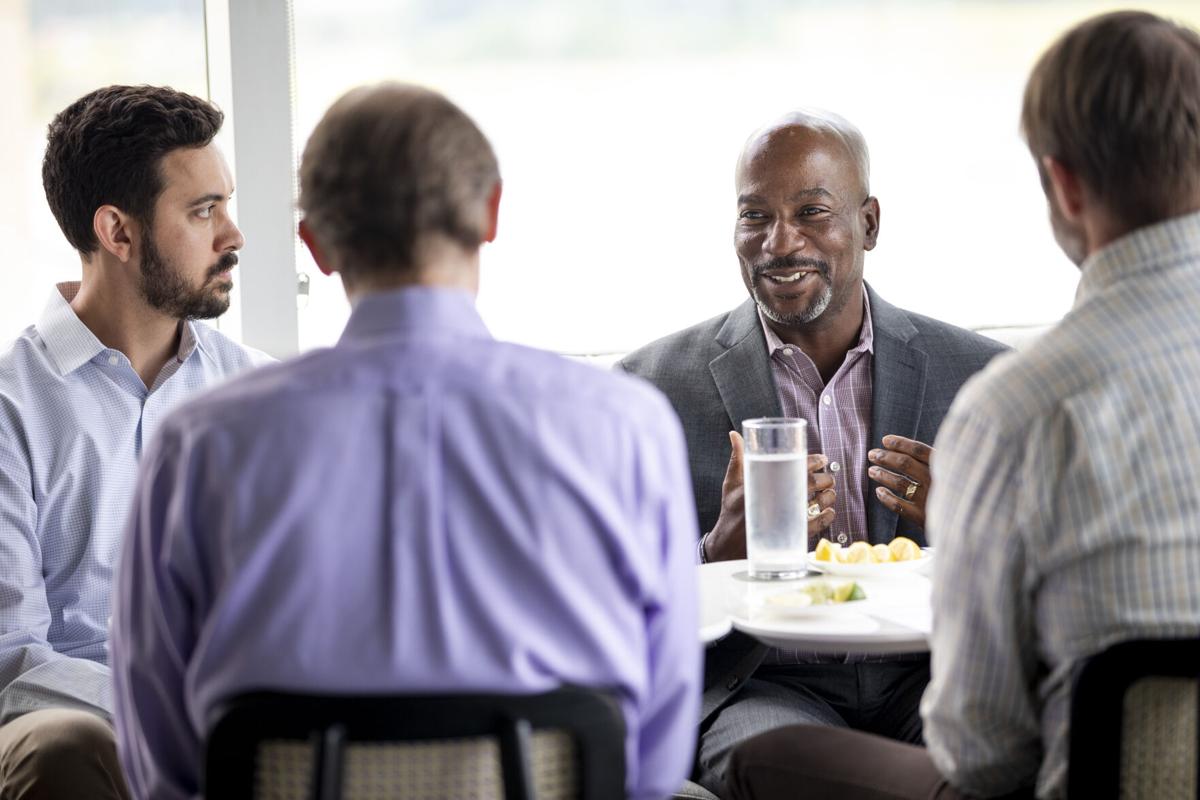 Darrin Goss, president and CEO of the Coastal Community Foundation, meets with investors Josh Rollins, Mike Gatchaell and John Crawford from Greenville at the Harbour Club at WestEdge on Monday, Aug. 31, 2020, in Charleston. The Charleston Forum is focusing its conversations on strategies to address racial disparities.  Andrew J. Whitaker/Staff 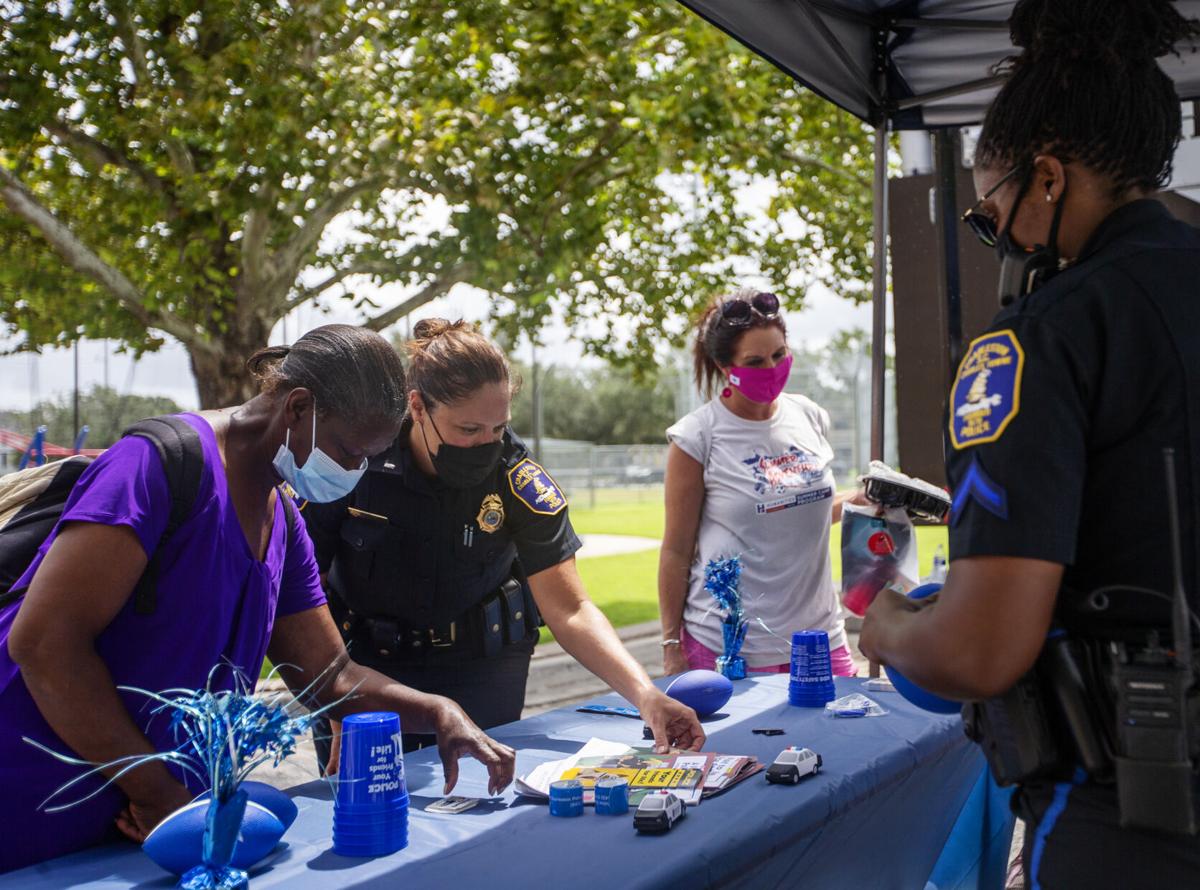 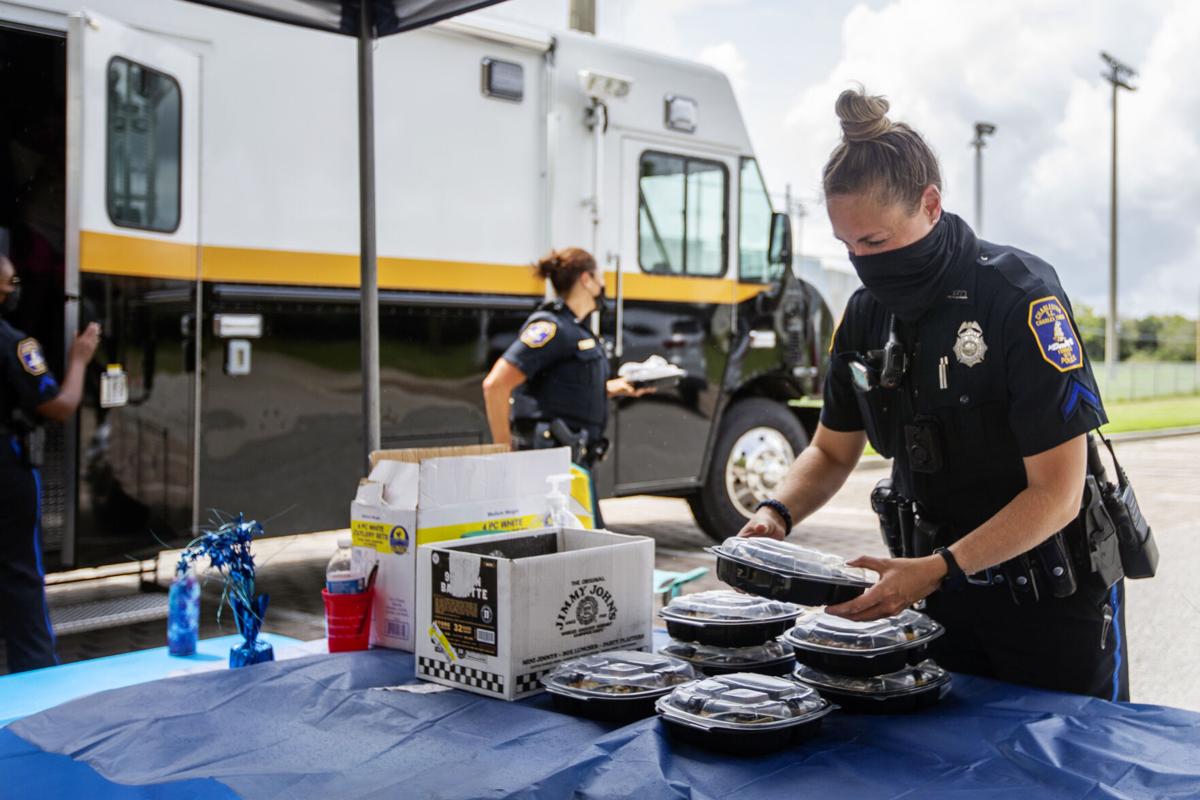 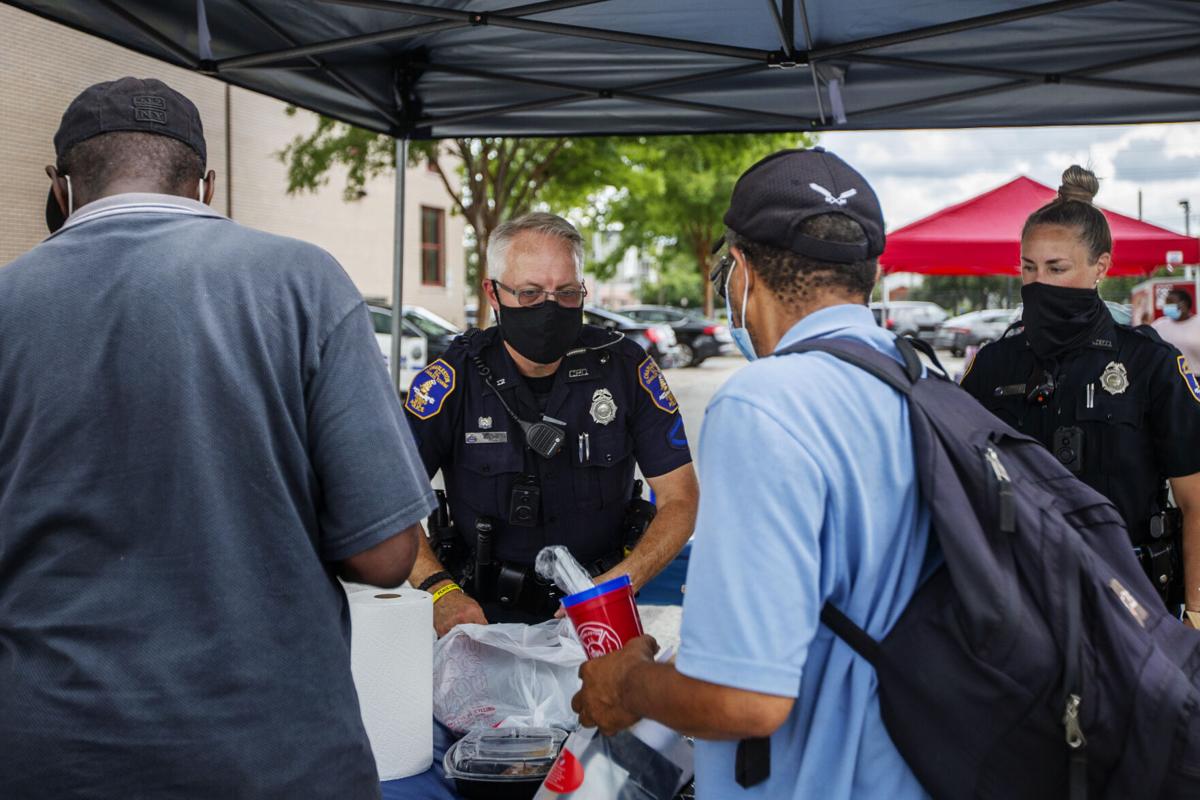 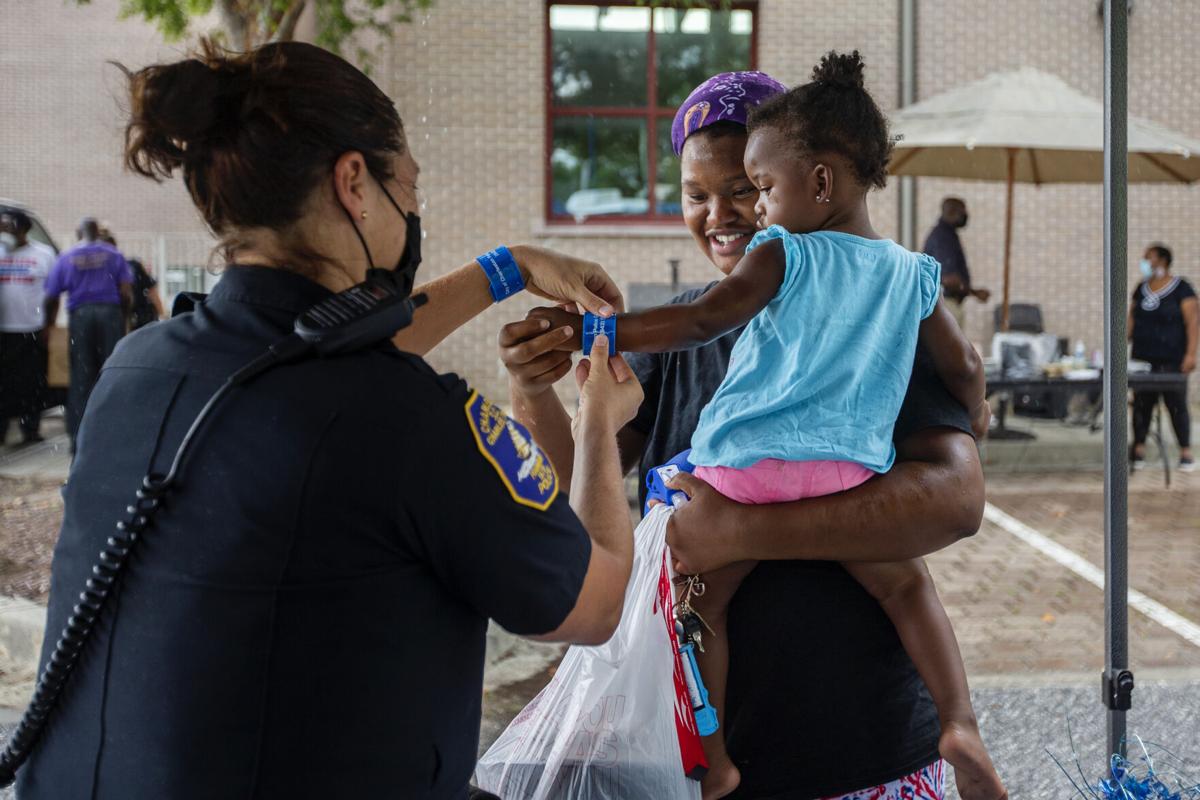 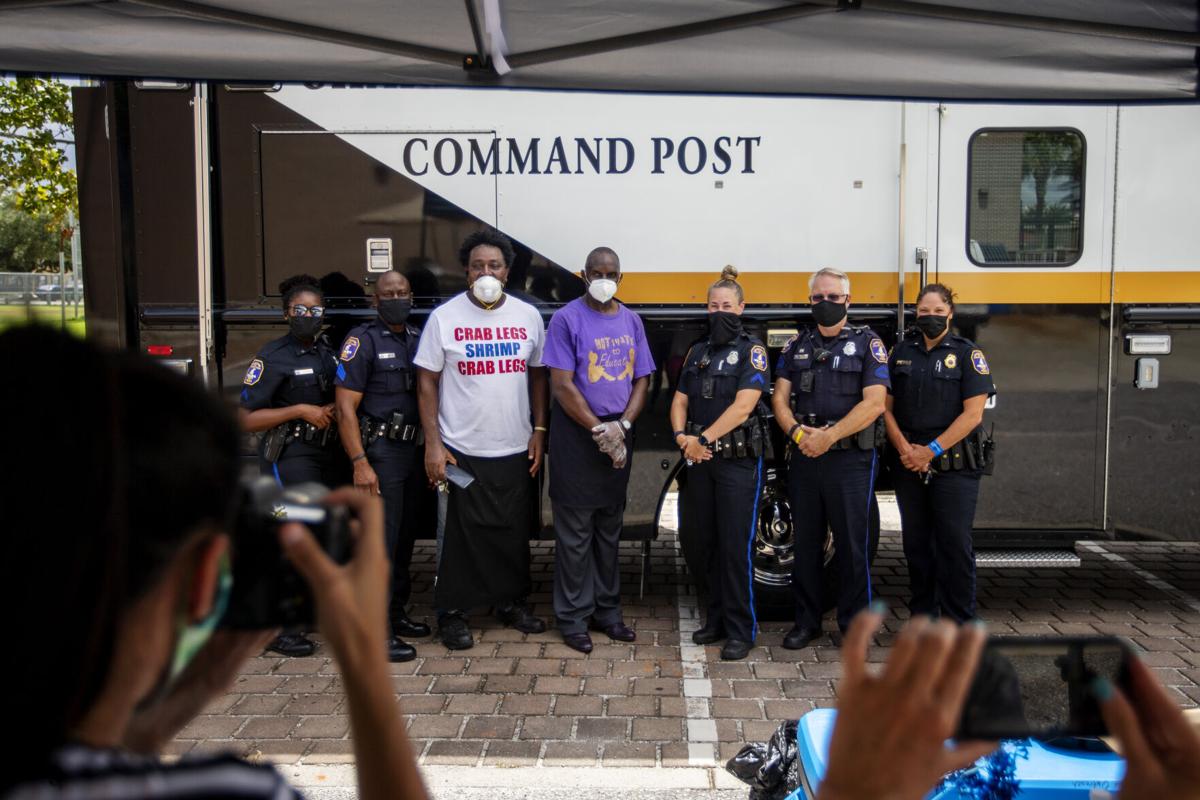 Darrin Goss, president and CEO of the Coastal Community Foundation, meets with investors Josh Rollins, Mike Gatchaell and John Crawford from Greenville at the Harbour Club at WestEdge on Monday, Aug. 31, 2020, in Charleston. The Charleston Forum is focusing its conversations on strategies to address racial disparities.  Andrew J. Whitaker/Staff

Years of work led to the Charleston Forum's survey on racial relations, but it's not the culmination of its mission.

The forum, established in 2016 after the slayings of nine African American members of Emanuel AME Church by a white supremacist, wanted to focus its mission of discussing race on a series of goals.

Over the next year, the forum is focusing its conversations on strategies to address the disparities documented in the community survey, which revealed overwhelming agreement that Black residents in the Charleston area face poverty, overpolicing and de facto segregation, but showed little consensus on the best path forward.

"There is significant agreement in a lot of areas that we are not living up to those goals," forum CEO Brian Duffy said. "From an objective and higher-level view, that's very encouraging — it means we're half of the way there already, and we just need to focus on the methods."

They'll work closely with politicians, activists and leaders in each area to develop policies focused on equalizing disparities in economic opportunities, criminal justice, education, affordable housing and recognizing history. Ahead of that conversation, local leaders told The Post and Courier about policies that could help them address inequality in the communities they serve.

'Look at who's missing'

"After you've deconflicted and detangled the data around race, gender, age, ask those questions you would ask if you were on a manufacturing floor, trying to ask why you have the same quality problem," said Darrin Goss, CEO of the Coastal Community Foundation. "We look at who's missing from the conversation."

For the foundation, which serves coastal communities through grants and impact investments, that meant diversifying the ranks of investment managers and focusing funds on minority-led ventures that could empower marginalized voices at every step of the strategizing process.

A few years ago, Goss said, the foundation's investment portfolio was focused on returns, and worried that an Environmental, Social and Governance portfolio wouldn't perform as well. But it's outdone their traditional portfolio, and Goss thinks the concept is ripe for expansion across Lowcountry organizations.

"There are minority-led nonprofits, developers, businesses who just need an opportunity," Goss said. "They need leaders to make a commitment to not thinking about the deficits, but about the assets."

Goss would like to see the leadership model that permeates it in more Lowcountry offices, empowering people to question systems founded in racism, or implemented without a focus on equalized effects.

"In practice, a race-neutral policy can absolutely produce racist or inequitable results unless we question the practice," Goss said. "If we just stick with what we know ... we'll just keep getting what we get."

Defense attorney Jerod Frazier hopes to see more representation in the group that can mean justice or judgment for his clients: the jury.

Survey: "On a scale of 1-10, how would you describe your trust in the judicial system including courts, prosecutors, and judges?"

Juries with at least one person of color tend to deliberate longer, Frazier said, and are important to fully represent a defendant's community. Just a quarter of Black survey respondents said they trusted juries to judge cases fairly.

In many courts, Black residents are already underrepresented in jury pools. They're less likely to be able to take a day off work for meager jury wages, according to the American Bar Association, or to return forms mailed to often-outdated home addresses. Since the Palmetto State draws its jurors' names from voting and Department of Motor Vehicles records,  South Carolinians who move often or don't have updated paperwork — disproportionately people of color — are left out.

The selection process, or voir dire, begins with a series of questions from the judge in an attempt to weed out jurors who aren't in a position to weigh the case fairly. Any number of jurors can be dismissed, for reasons like their familiarity with the case or being employed by or in a relationship with one of the parties. And then, attorneys on each side of the courtroom can excuse some jurors themselves, without explaining why.

Equitable leadership is important to give decisions perspective, but also to give marginalized children examples of what they themselves can accomplish, said Tricounty Cradle to Career Collaborative CEO Phyllis Martin.

"Children who are Black, Brown, Indigenous, Latino, they need to have teachers who look like them and have their experience," Martin said. The collaborative campaigns for better funding and access in the state's education system, which 44 percent of Black survey respondents said was broken.

Stopping the cycle, without conditions

The close relationship between basic public services and the criminal justice system has disenfranchised residents who need help to regain stable lives, leaders told The Post and Courier, with a lack of public funds herding residents into low-level crimes, and criminal histories preventing others from gainful employment and steady housing.

"From slavery to Jim Crow to the war on drugs, we've seen consistent over-policing of Black communities," said Frank Knaack, executive director of the ACLU of South Carolina. "We've had this knee-jerk reaction to criminalize everything."

But the root of high crime rates often lies in systemic issues, Knaack said: Proper sidewalks would do more to mitigate pedestrian injuries than an officer citing jaywalkers.

"We need to rethink what we mean by 'public safety,'" Knaack said. "Let's appropriate (public safety) money to where communities need these services."

Affordable housing is often reserved for people "who are safe bets," Corona said, with good credit and no history in the criminal justice system.

"That doesn't necessarily address the racial inequality in homelessness," Corona said. "We view housing as a basic necessity to break that cycle."

Across demographics, survey respondents agreed there's not enough affordable housing in the tri-county area. Inequality in wages and policing feed racial disparity, Corona said, and a housing-first movement that doesn't require a high income or clear records of respondents would help balance the disparity.

The main factor driving Black residents from land they own is heirs' property, according to the U.S. Department of Agriculture, fueled by generations of a legal system that wasn't available for poor landowners.

Heirs' property, or land passed down to each owners' descendants informally, is usually found in communities without the legal background — or money to pay for someone else's — to formalize titles.

In the South, that's often Black families descended from ancestors who were freed from slavery with little to sustain them aside from land to work.

"They didn't trust the legal system, didn't have access to the legal system, couldn't afford the legal system," said Jennie Stephens, CEO of the Center for Heirs' Property Preservation. It's understandable, she said, but has left their descendants with compounded consequences, from difficulty applying for federal disaster recovery aid to the possibility of a single descendant forcing a sale.

As population booms across the tri-county area, heirs' property is susceptible to development and gentrification. The center tries to ensure those who live on it have the legal advice to own their land and the forestry knowledge to profit from it. The center is using a recent grant to educate communities about the cultural significance of nearby heirs' property.

Stephens would like to see the cultural education program expanded throughout the tri-county as a way of curbing development that breaks up Black communities. While nearly half of White survey takers said the government shouldn't be involved in maintaining racial balance in communities, just 15.7 percent of Black respondents agreed. Stephens thinks focusing on education would provide a foundation for private developers to be mindful of gentrification.

"When people learn about the culture of the community, they're less likely to eliminate or develop that community to the point that it's lost," Stephens said. "It's about making sure that everybody understands the impact that heirs' property has on the community."

One of the most controversial sets of questions in the forum's survey centered on history, with most White respondents saying monuments to figures who espoused slavery and racism should remain, and most Black respondents wanting them removed.

"These say to millions of Americans like me that our lives, our history, our sacrifice and ongoing concerns just do not matter," said Heather Hodges, CEO of the Gullah Geechee Cultural Heritage Corridor. "Unless we (condemn that) I think it's very difficult to move forward."

But regardless of whether those memorials are removed, the corridor has compiled a list of historic sites it wants publicly recognized as key to its mission of highlighting Black residents' impact throughout the Lowcountry's history — including more than 150 places, such as plantations and the homes of civil rights leaders, in Charleston County alone.

"Africa is foundational culture for South Carolina, no less than Native American and European culture," Hodges said. "Our heritage runs so much deeper than slavery. ... We have to tell the entire history of South Carolina in our public spaces."

At their next meeting, forum leaders will discuss how to turn their findings into policy proposals, Duffy said, the specifics of which will depend on funding.

Each month, the forum will host online discussions on each of the forum's topics: education, economics, criminal justice, housing and monuments. Viewers can submit their own video suggestions for solutions to systemic issues, which the forum will discuss over the next year with the goal of proposing concrete policies.

After gathering a "catalog" of community ideas and fine-tuning them in online discussions through the year, Duffy said the forum hopes to release another survey to see which ideas are most widely supported.

"We want to make sure we get out and talk to people who aren't involved (in policy) but are affected," Duffy said.

The forum's focus was always to discuss — and therefore eradicate — the undertow of racism that fueled the Emanuel AME massacre. But, Duffy said, discussion and consensus are the strongest possible foundation for deep changes that address every issue for which racism was a root cause. By the end of the year, the forum will be ready to take the second step in a long but necessary journey.

Some say race relations improved since Charleston's Emanuel tragedy, but progress far off