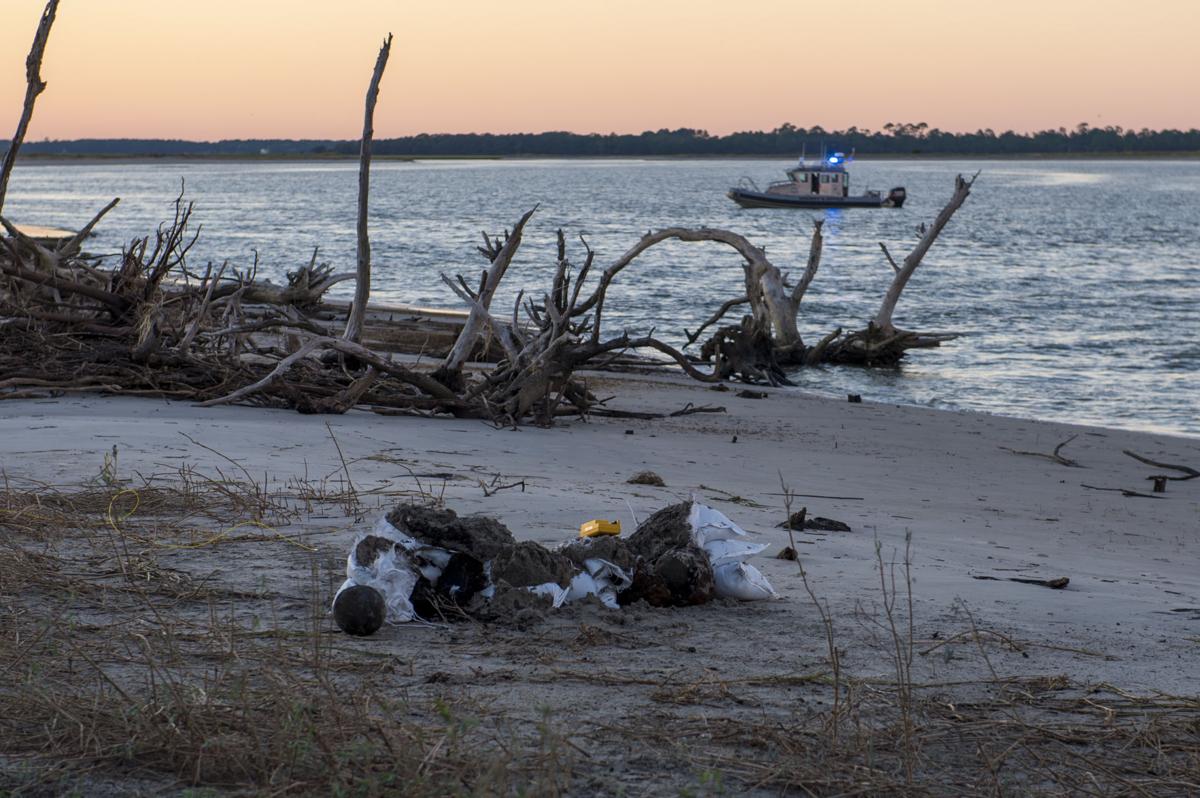 Someone walking down Folly Beach found cannonballs from the Civil War the day after Hurricane Matthew made landfall. Air Force explosives experts would later detonate 15 of the 17, leaving two to be preserved. Airman 1st Class Sean Carnes/provided 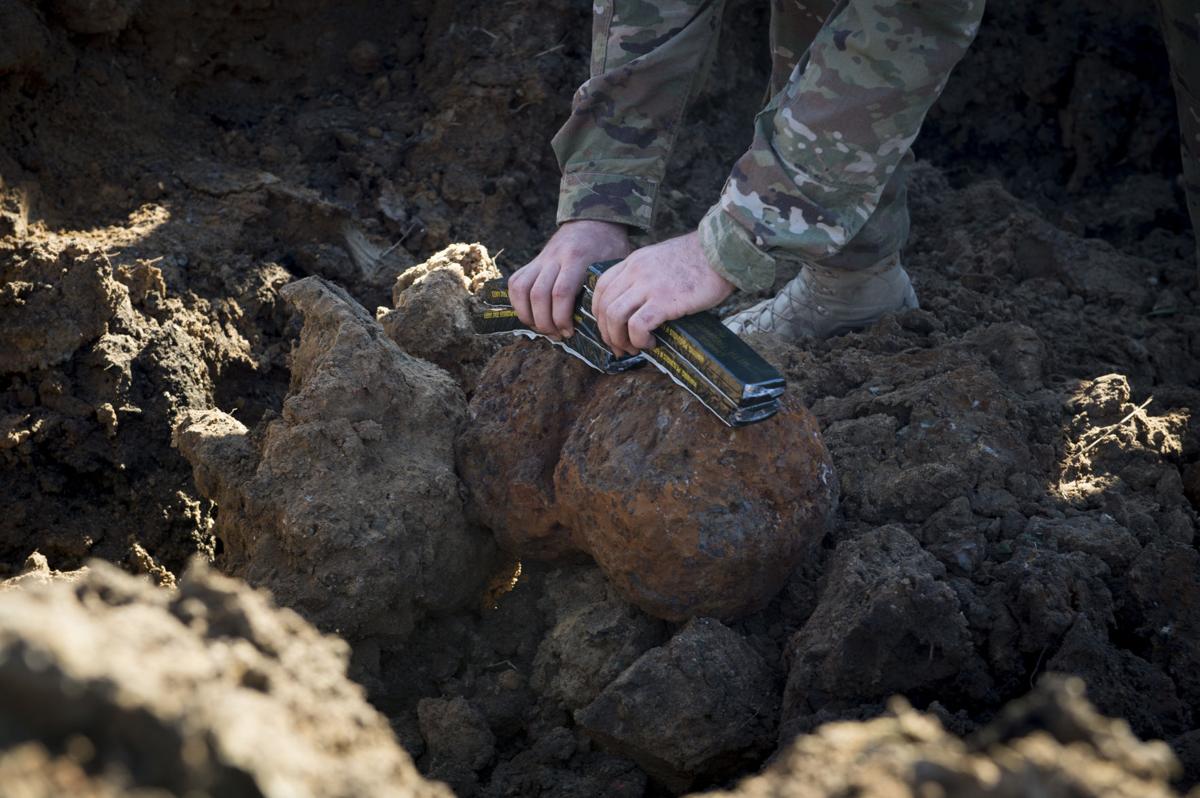 An ordnance disposal technician puts C-4 explosive on two Civil War cannonballs that washed up on Folly Beach in October. Of the 17 shells uncovered by Hurricane Matthew, 15 were destroyed. Staff Sgt. Andrea Salazar/provided 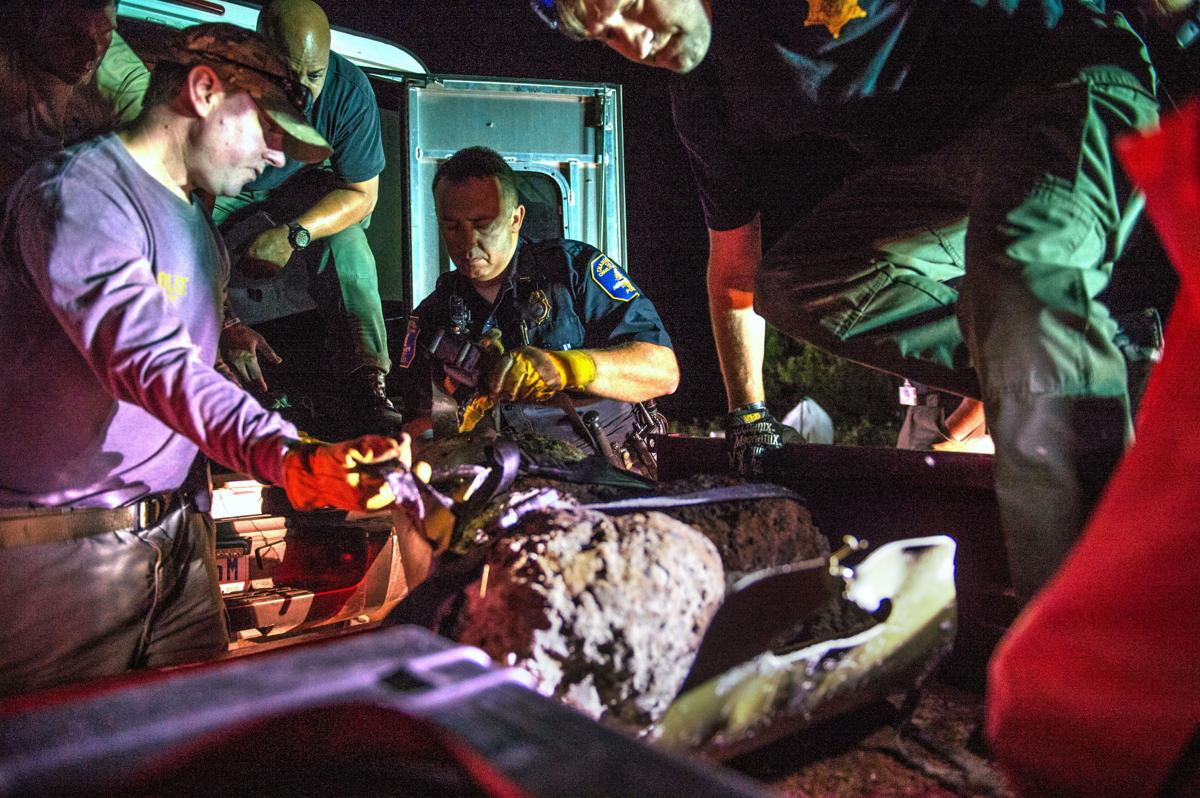 Law enforcement and military bomb squads worked to move Civil War cannonballs uncovered by Hurricane Matthew from Folly Beach to Joint Base Charleston. About a month later, most of the munitions were destroyed. Airman 1st Class Sean Carnes/provided

Someone walking down Folly Beach found cannonballs from the Civil War the day after Hurricane Matthew made landfall. Air Force explosives experts would later detonate 15 of the 17, leaving two to be preserved. Airman 1st Class Sean Carnes/provided

An ordnance disposal technician puts C-4 explosive on two Civil War cannonballs that washed up on Folly Beach in October. Of the 17 shells uncovered by Hurricane Matthew, 15 were destroyed. Staff Sgt. Andrea Salazar/provided

Law enforcement and military bomb squads worked to move Civil War cannonballs uncovered by Hurricane Matthew from Folly Beach to Joint Base Charleston. About a month later, most of the munitions were destroyed. Airman 1st Class Sean Carnes/provided

The day after Hurricane Matthew made landfall in the Lowcountry, someone walking along the eastern edge of Folly Beach looked down and spotted a few rusted hunks of metal. It was a pile of 17 Civil War cannonballs, fused together for a century and a half, newly uncovered by a churning sea.

The passerby called the police, the police called an Air Force bomb squad, and the bomb squad did what bomb squads do: They saw munitions designed to inflict harm, they put on protective gear, and they prepared the cannonballs to be taken away and destroyed.

About a month later, they followed through. In a range on Joint Base Charleston, military technicians stuck C-4 explosives on 15 of the cannonballs and demolished them. They left two to be deactivated and preserved, and they moved on.

And a few states away in Arkansas, Carl Drexler got a new line in his spreadsheet.

The archaeologist has been keeping an informal tally of artifacts destroyed by bomb squads, counting at least 50 incidents in the past decade. He understands why it happens: A live cannonball can be deadly if handled the wrong way, even if it's been more than a century since it was first fired.

But it's still frustrating, he said, since he doesn't think most of them need to be destroyed.

Archaeologists who study historic munitions say that if they're handled properly, they shouldn't pose much of a risk. Most black powder explosives have been rendered inert by decades and decades of water seeping in. Those that haven't aren't prone to go off without the help of a flame — usually a stray spark from a power tool trying to open one up.

And while Civil War ordnance may seem common enough — pieces from the shelling of Charleston turn up with some regularity — Drexler said getting specimens in one piece is important. The technology packed into many cannonballs hasn't been documented, so every time a strip of C-4 blasts one into pieces, historians could be losing a chance to see a new kind of fuse, or to find one positioned in a new place.

"Having an intact piece of American history like that is always vital. A lot of times what we're finding is that when these things get destroyed, there are no fragments collected, no parts of the fuses or anything like that," said Drexler, a station archaeologist at the Arkansas Archaeological Survey. "We lose the opportunity to find any kind of undocumented things, as well."

That's why Drexler is setting out to protect more munitions. He's trying to get to know technicians better so that they'll call first. He's working on a course about historic pieces for bomb squads. And he's trying to get more archaeologists to help out.

James Legg is one of them. As a researcher at the South Carolina Institute of Archaeology and Anthropology in Columbia, he's seen plenty of artifacts lost over the years — even though there's a precedent for saving them.

Back in the 1960s, he said, technicians developed a method for safely removing and protecting munitions from Fort Sumter, where they were still strewn about. They built a drill designed to prevent sparks, and they wrote up a manual for dealing with the era's cannonballs — "A Field Guide For Civil War Explosive Ordnance."

The munitions they saved are on display in the underground magazines at Fort Moultrie, and their guide was published by the U.S. Navy in 1972. And then, he said, it was mostly forgotten.

Like Drexler, Legg said he understands why bomb squads do what they do. He knows of a few cases where people were killed or mangled by Civil War shells in recent decades, including a collector he knew in North Carolina. Each one, he said, involved power tools, though he worries about what would happen if a collector's home caught fire with a live cannonball inside.

Plus, technicians have a job to do: The ordnance still belongs to the federal government — even if the cannonballs probably date to the battle of Fort Wagner 153 years ago and the federal batteries set up on the island. The responsibility to make sure no one gets hurt belongs to them, too.

So the cannonballs aren't safe, Legg said, but he doesn't think detonating them should be the next step.

"There's a couple of good reasons not to ignore the fact that there's some danger involved," Legg said. "The step should be (to) get it disarmed by someone who knows what they're doing as opposed to blowing it up with plastic explosives."

They were filled with explosive powder, so they were more dangerous than solid shot. They were stuck together, so drilling in to disable them would be more challenging. And they didn't seem to be particularly rare, so the risk just wasn't worth it.

"To make that decision, we just look at the overall picture and make a risk assessment," said Hansen, team chief for the job.

Still, he said, crews at Joint Base Charleston have worked to preserve what they can. They've saved rarer pieces before, and they managed to salvage two of the 17 cannonballs found after the hurricane.

Those two may wind up at the Charleston Museum, though after a century and a half of saltwater and wear they might never find a spot in a display case, said Grahame Long, the museum's chief curator.

Even so, they'll probably have scholarly value. The Civil War saw a flood of innovation and experimentation — "everybody's out to build a better mousetrap," he said — so the cannonballs could offer insight into how ordnance evolved.

And he credits the explosives crew for calling, even if they can't save a piece. That started five or six years ago, he said, when a group of technicians stopped by the Meeting Street museum for a brief tutorial. Long showed them what to keep an eye out for — what's rare, what's common and how a cannonball's location can be significant in itself.

"They have started to be, to their credit, a lot more cognizant of what could potentially be historically significant," Long said. "I thought that was a really progressive thought on their part, that they were taking the initiative to make sure that they weren't just wantonly exploding stuff before we could at least learn something from it."