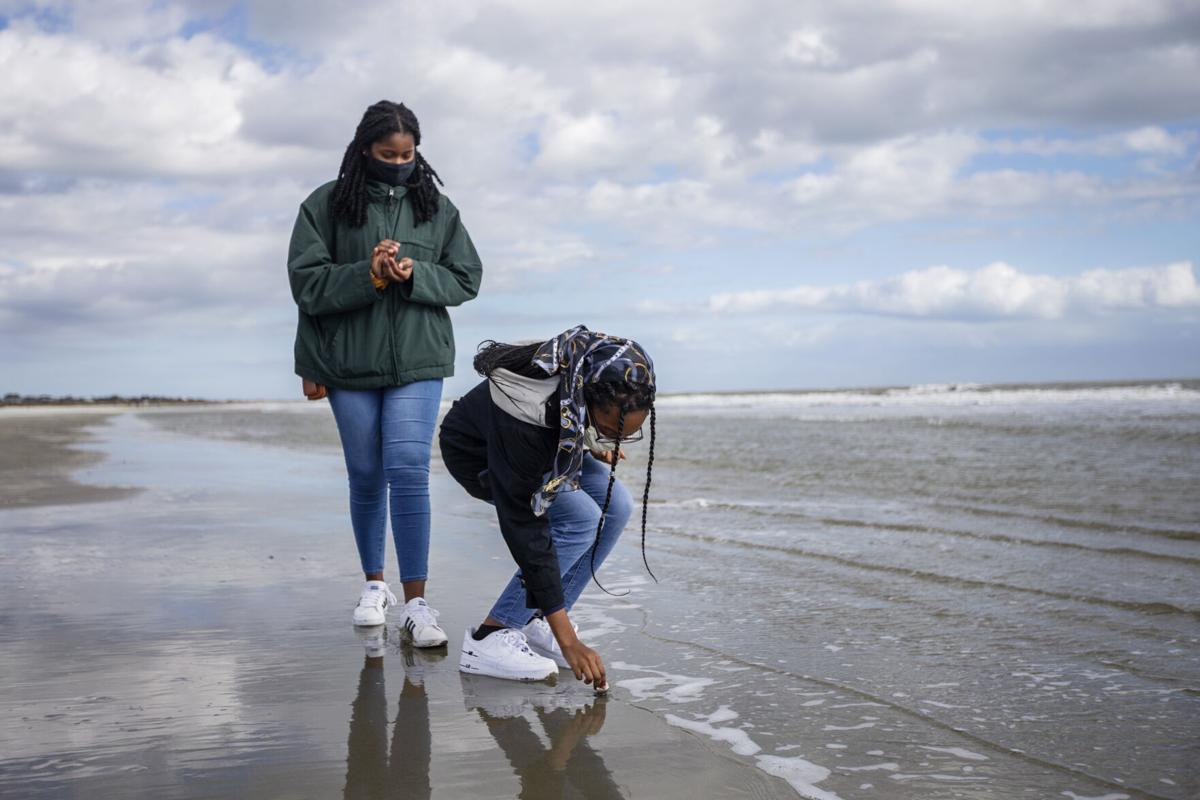 Esther Oyassan walks over to see the shell her sister, Bellafaith, is picking up on the beach Wednesday, Dec. 23, 2020, on Sullivan's Island. This was the year Charleston-area residents feared losing the ability to take a walk on the beach without having to pay. Gavin McIntyre/Staff 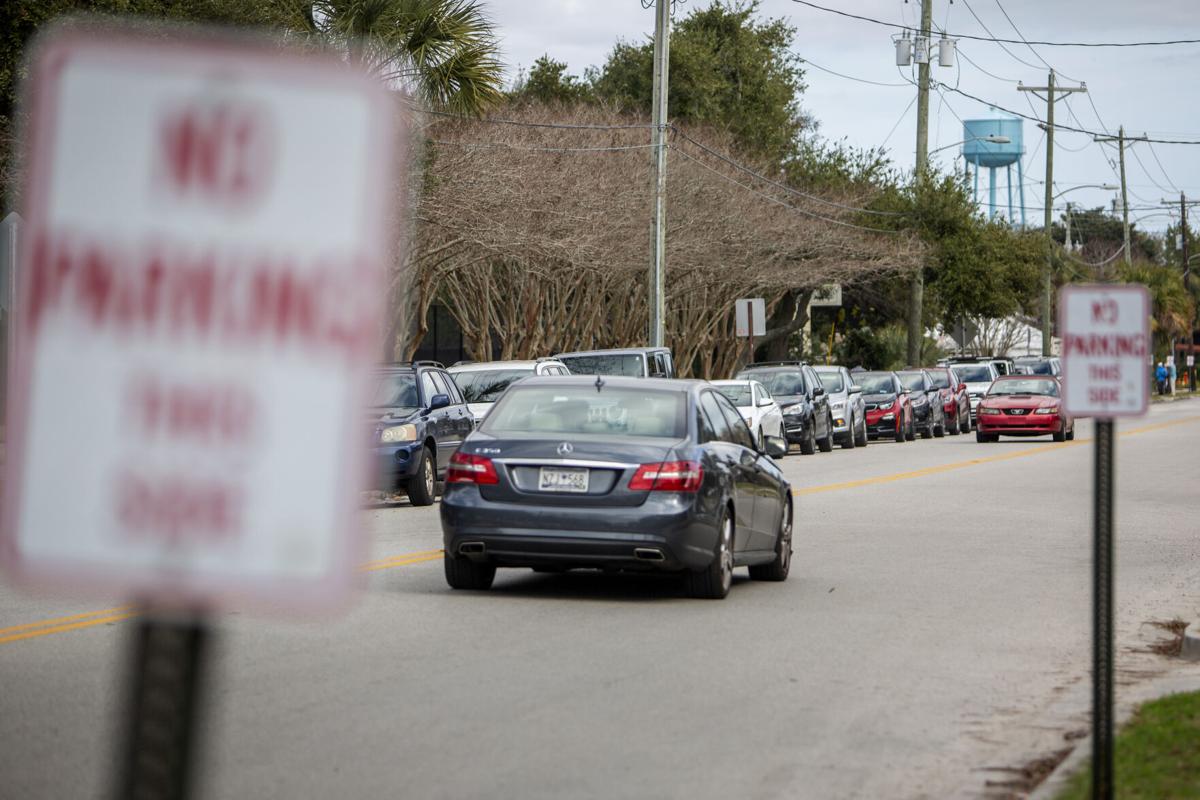 Traffic moves along Middle Street on Wednesday Dec. 23, 2020, on Sullivan’s Island. This year, Charleston-area residents feared losing the ability to take a walk on the beach without having to pay. Gavin McIntyre/Staff 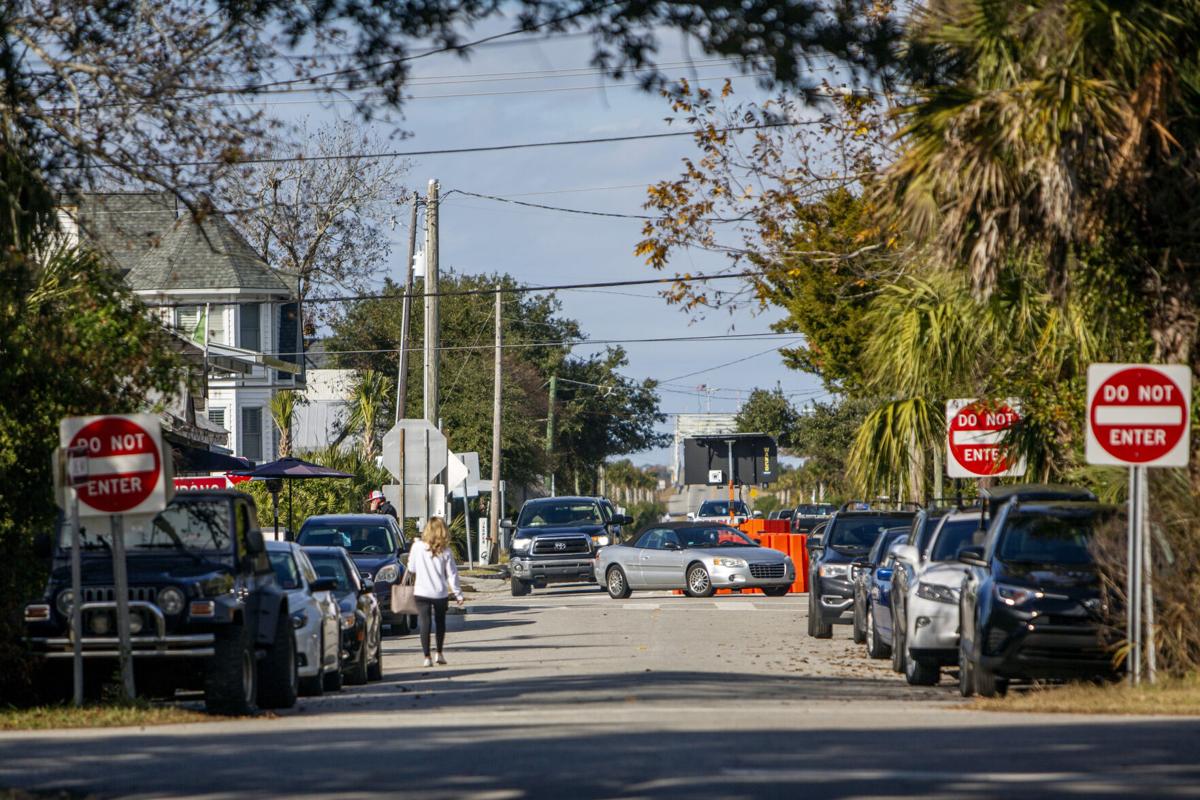 Cars are parked on the sides of Station 22½ Street on Wednesday, Dec. 23, 2020, on Sullivan’s Island. Gavin McIntyre/Staff 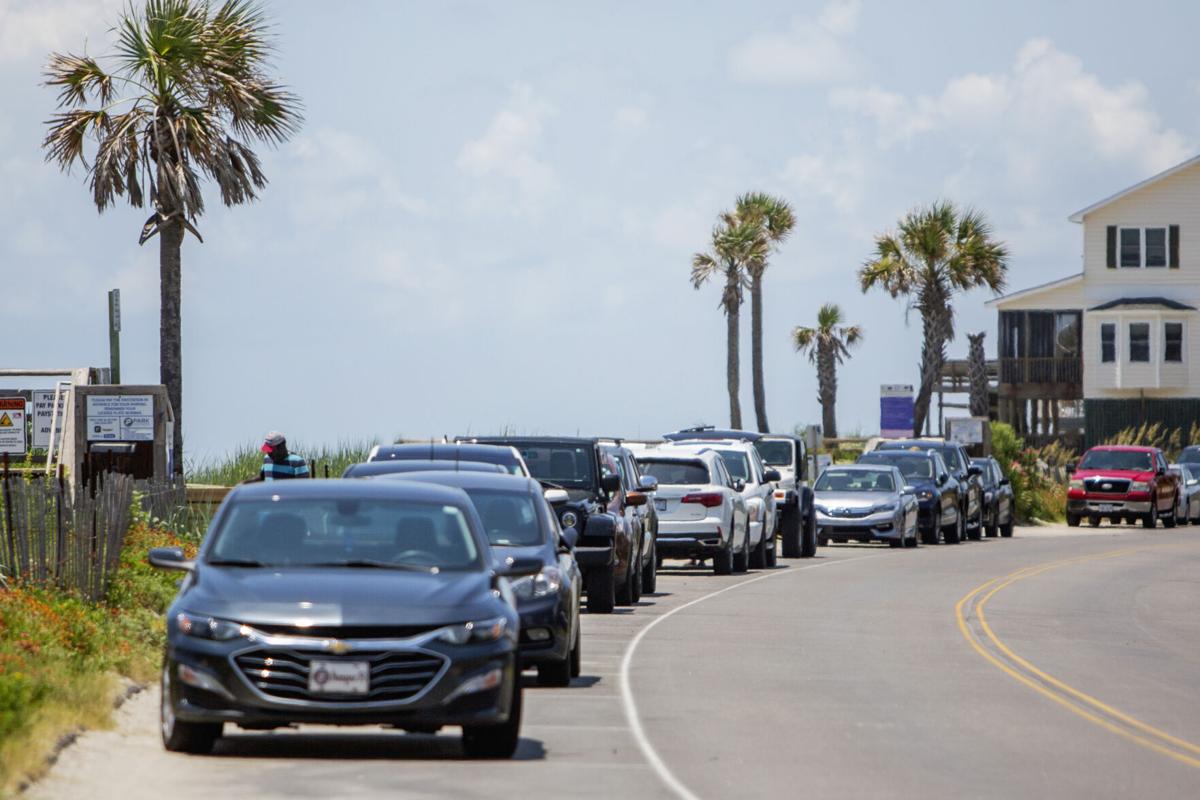 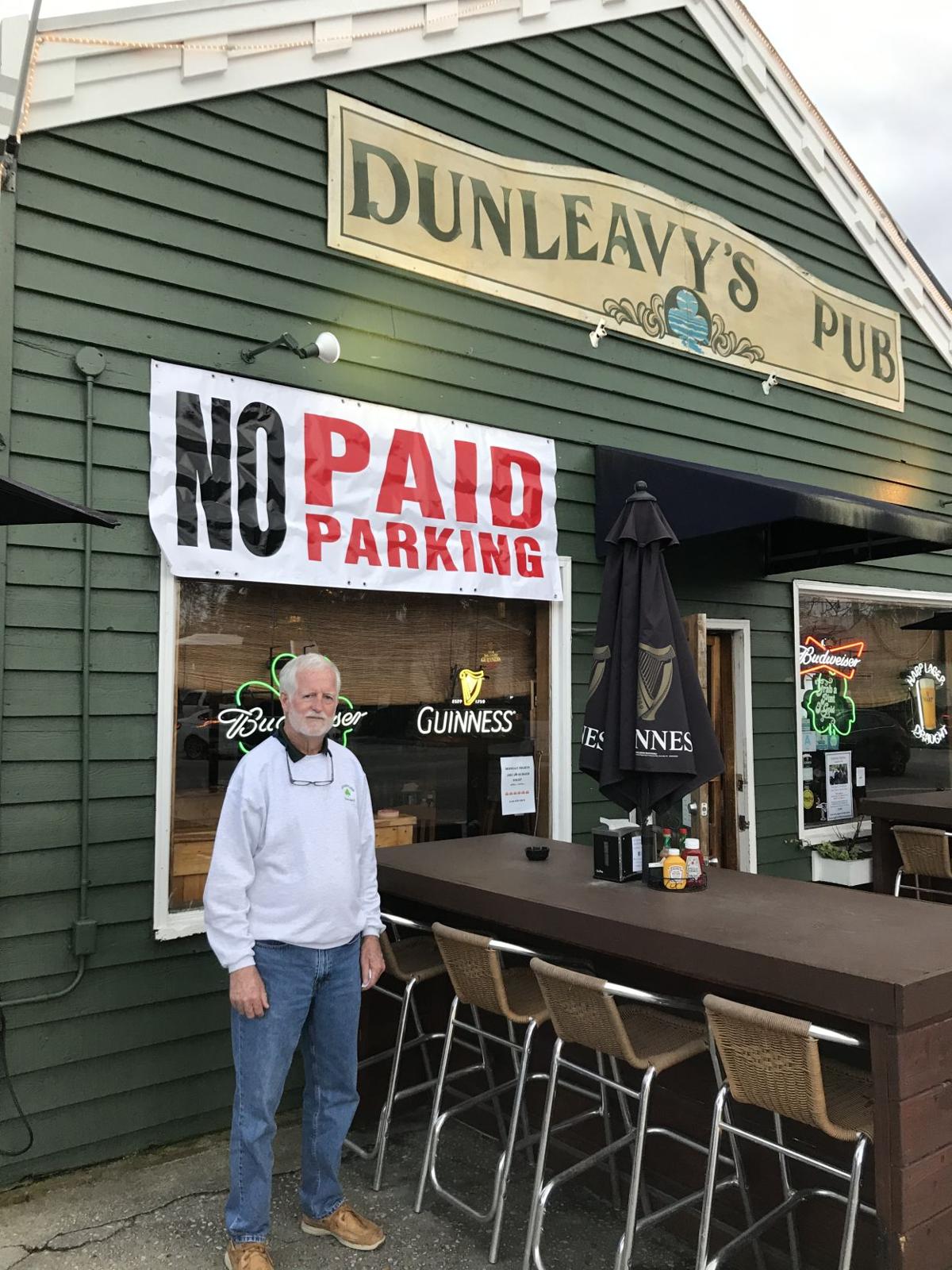 Bill Dunleavy, co-owner of Dunleavy's Pub on Sullivan's Island, has been leading a campaign against the possibility of paid parking on the island. Brian Hicks/Staff 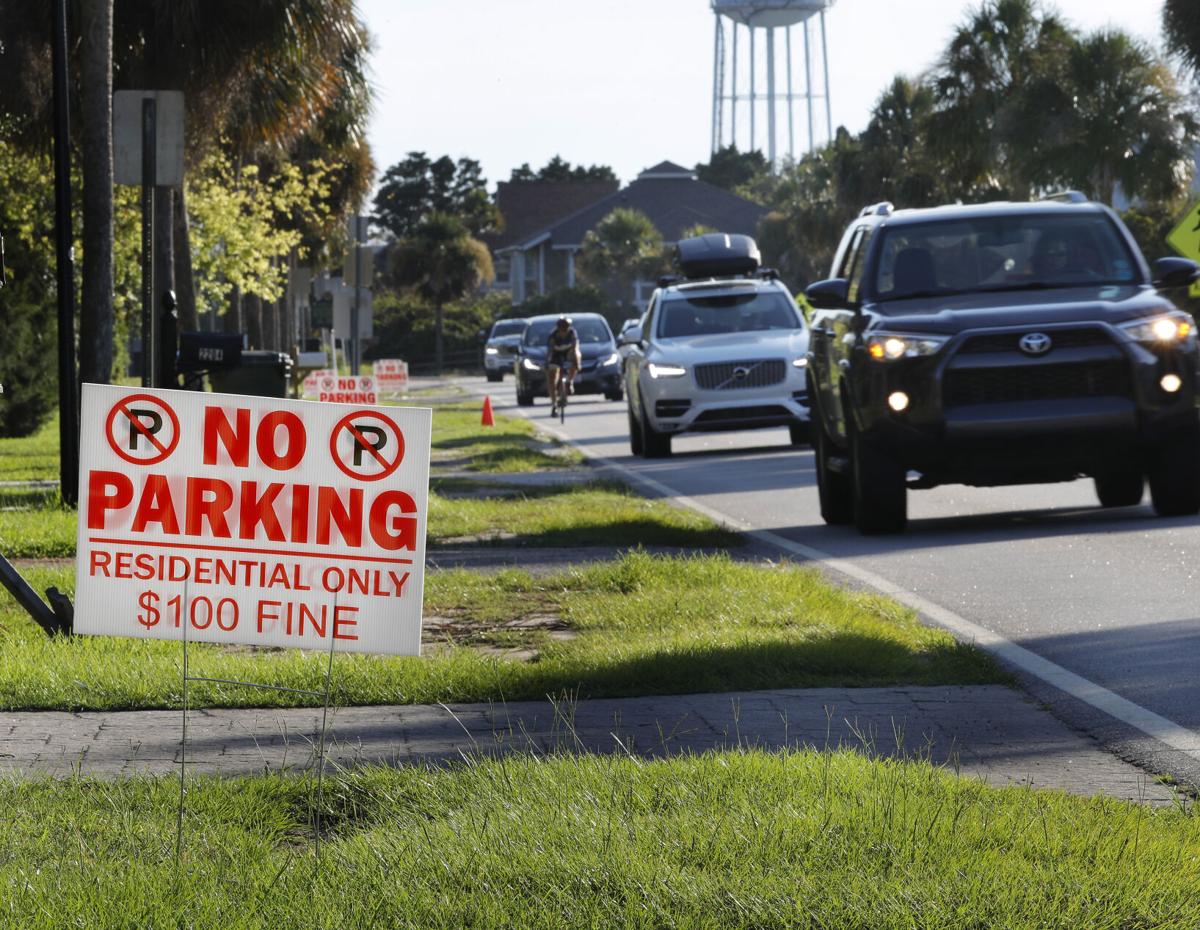 Signs were posted along both sides of Palm Boulevard on Isle of Palms, July 27, 2020, when the city temporarily eliminated most free beach parking. Grace Beahm Alford/Staff

Esther Oyassan walks over to see the shell her sister, Bellafaith, is picking up on the beach Wednesday, Dec. 23, 2020, on Sullivan's Island. This was the year Charleston-area residents feared losing the ability to take a walk on the beach without having to pay. Gavin McIntyre/Staff

Cars are parked on the sides of Station 22½ Street on Wednesday, Dec. 23, 2020, on Sullivan’s Island. Gavin McIntyre/Staff

Then came parking restrictions and talk of eliminating free parking near the beaches.

2020 became the year Charleston area residents feared losing the ability to take a walk on the beach without having to pay.

Sullivan's Island considered a plan to charge for parking. Isle of Palms proposed eliminating all free parking for nonresidents — and raised parking rates in paid areas, too. Folly Beach temporarily banned nonresidents from most free parking.

A Mount Pleasant interest group advocating beach access quickly sprang up, thousands strong, and sued Isle of Palms. The state Department of Transportation swatted down Isle of Palms' plan to eliminate hundreds of parking spots along state-owned Palm Boulevard, and state Sen. Larry Grooms, R-Bonneau, has prefiled legislation to clarify that beach parking on state roads is free unless the state says otherwise.

“I believe it will pass and pass rather quickly," Grooms said. “Our state beaches are an absolute treasure and we don’t need some high-handed council members walling off our beaches from the rest of the state."

For all the fighting over beach access and plans to reduce or eliminate free parking, beachgoers will find the parking rules on Isle of Palms, Sullivan's Island and Folly Beach in 2021 about the same as they were before anyone had heard of COVID-19.

The beach parking fight isn't over — the "No Paid Parking" bumper stickers and yard signs sprouting on Sullivan's Island are a visible sign of that, and the lawsuit against Isle of Palms is ongoing — but it's gone from a boil to a slow simmer.

“It looks like we are pretty much where we started. Except now, we are paying attention," said Lee Rowland, director of the Charleston Beach Foundation, a nonprofit group that grew out of the beach-access dispute.

Here's a look at where things stand going into the 2021 beach season on Isle of Palms, Sullivan's Island and Folly Beach:

Isle of Palms: Of all the Charleston-area barrier islands, Isle of Palms pursued the most aggressive restrictions on beach parking.

In July the city temporarily prohibited nonresidents from using 763 parking spots, including all but 10 free parking spaces on the island, prompting a lawsuit by the Charleston Area Public Beach Access and Parking Group, which has grown into the Charleston Beach Foundation.

Isle of Palms also proposed to permanently reduce the amount of parking available for nonresidents, citing public safety, and to charge for all the parking that remained. And, the city raised rates for existing parking meters and lots.

In September the state Department of Transportation threw cold water on the proposed elimination of parking. "To date, we have not identified any safety issues along Palm Boulevard that would warrant the elimination of parking," said SCDOT Secretary Christy Hall, echoing earlier comments by the city's police chief.

Meanwhile, the lawsuit prompted a pause in the city's plan to charge for all beach parking.

With plans to eliminate hundreds of parking spots nixed by the SCDOT and plans to charge for beach parking on hold, Isle of Palms will enter 2021 with beach parking much as it was at the start of 2020, except that metered areas and lots along Front Beach will cost more.

“Right now, parking is available at the same level it was for the last five years," Isle of Palms Administrator Desiree Fragoso said. “Those are conversations that will kick off again with the new Public Safety Committee in January."

Sullivan's Island: In early 2020, Town Council discussed a pilot program to charge nonresidents for parking, while residents would get parking stickers and booklets of passes for visitors. That plan was not pursued, but the discussion prompted a business-led effort to oppose paid parking and put the issue on the ballot for a referendum.

"There’s not one business on Sullivan’s Island that is for paid parking," said Bill Dunleavy, an owner of Dunleavy's Pub. “Either they drop it, or we want it on the ballot in May."

Multiple business owners have posed for photographs holding "No Paid Parking" banners. Bumper stickers are showing up on cars, and Dunleavy's is leading a petition drive among the island's registered voters for a ballot measure.

Town Administrator Andy Benke said it costs the town $600,000 or more to provide services for beach visitors, and paid parking could offset those costs.

“It’s something our council has to look at, as part of their responsibility to taxpayers and people who live here," he said.

Benke said there's no plan for paid parking in 2021.

Like Isle of Palms and Sullivan's Island, Folly Beach had significant beach-access restrictions during the summer of 2020. That included a substantial but temporary reduction in free parking for nonresidents, which has since ended.

“We’re just right back to where we were pre-COVID," Mayor Tim Goodwin said. “Hopefully, everybody gets to come and park and enjoy the beach because of the vaccine, and this COVID thing will be over with."

One possible exception, Goodwin said, could involve changes on Center Street “so that people don’t park in front of businesses and go to the beach for six hours." So far, no changes have been made.

The barrier islands certainly aren't finished talking about parking. They have all been working for years to balance the needs of island residents with the desires of the much larger populations that live nearby and want to visit the beach.