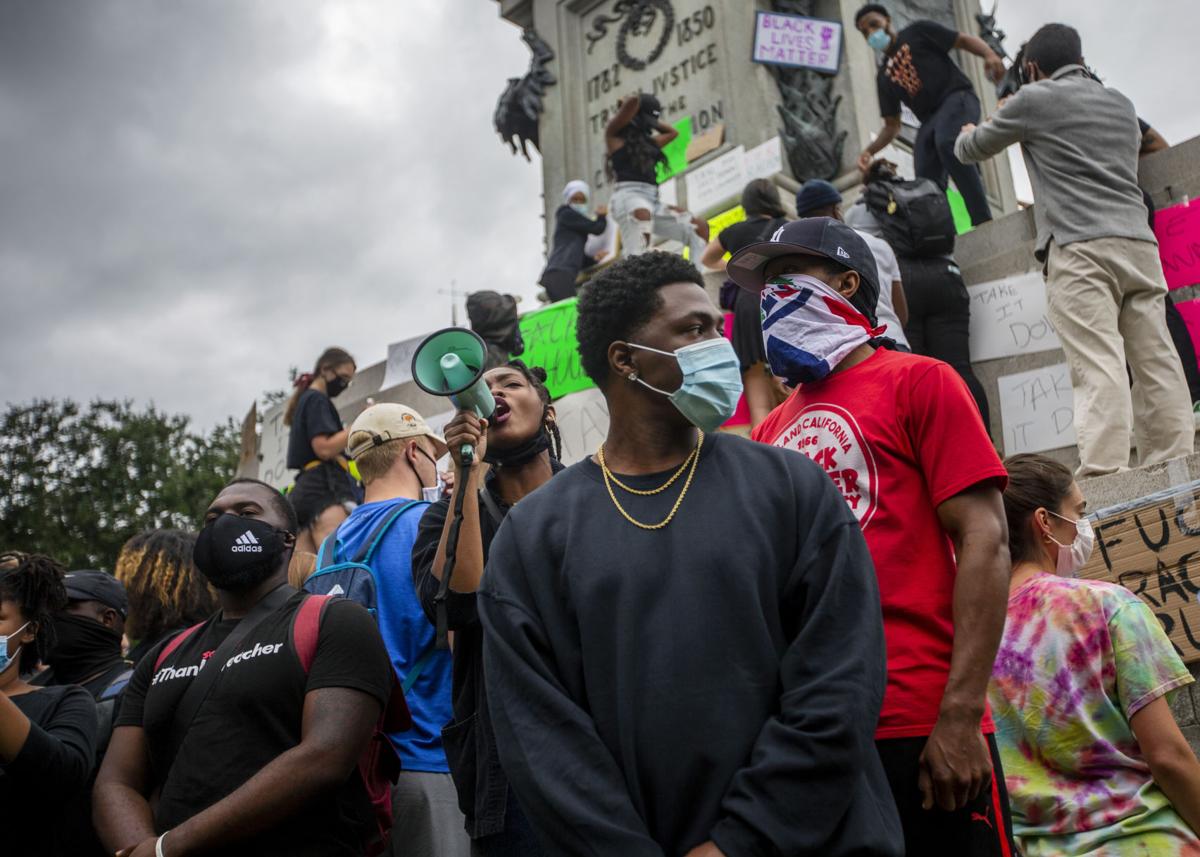 Trinity Griffin (center) calls for the Calhoun statue to be taken down during a protest Wednesday June 17, 2020, in Charleston. Gavin McIntyre/Staff 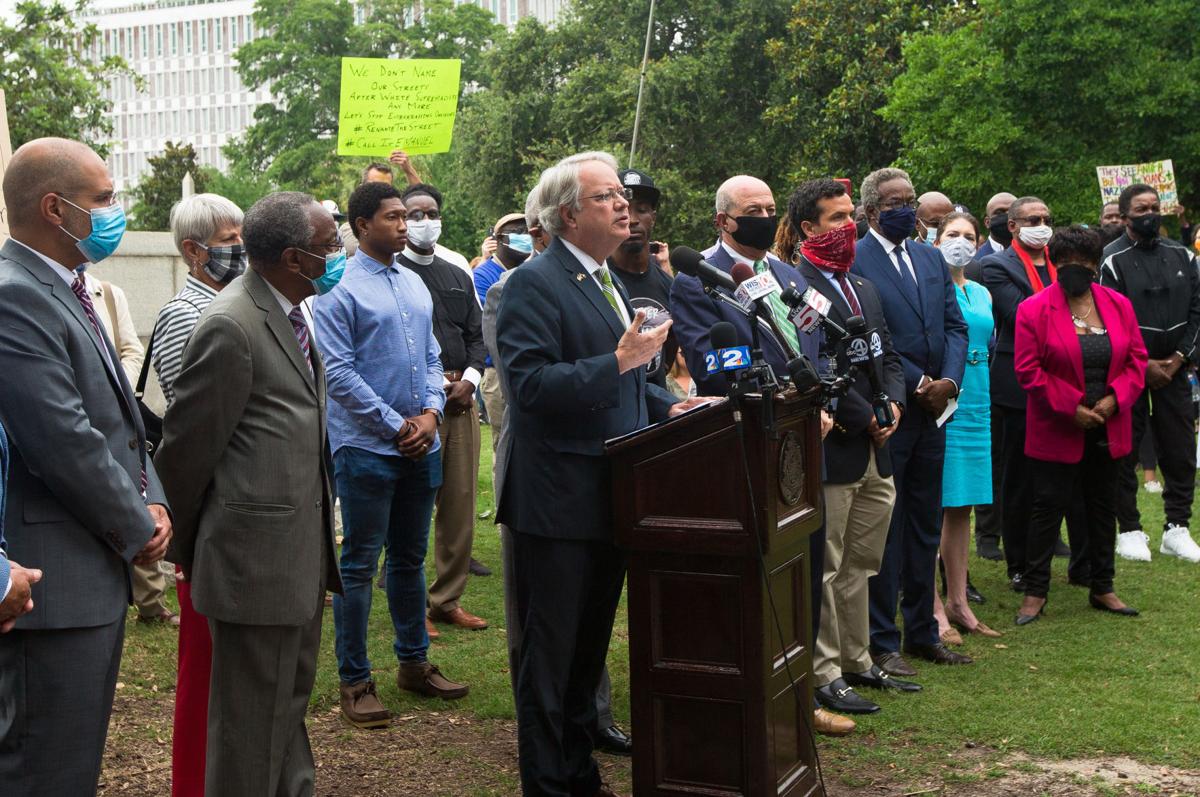 Mayor John Tecklenburg announces at a press conference to take down the John C. Calhoun statue in Marion Square on Wednesday, June 17, 2020 in Charleston. Andrew Whitaker/Staff 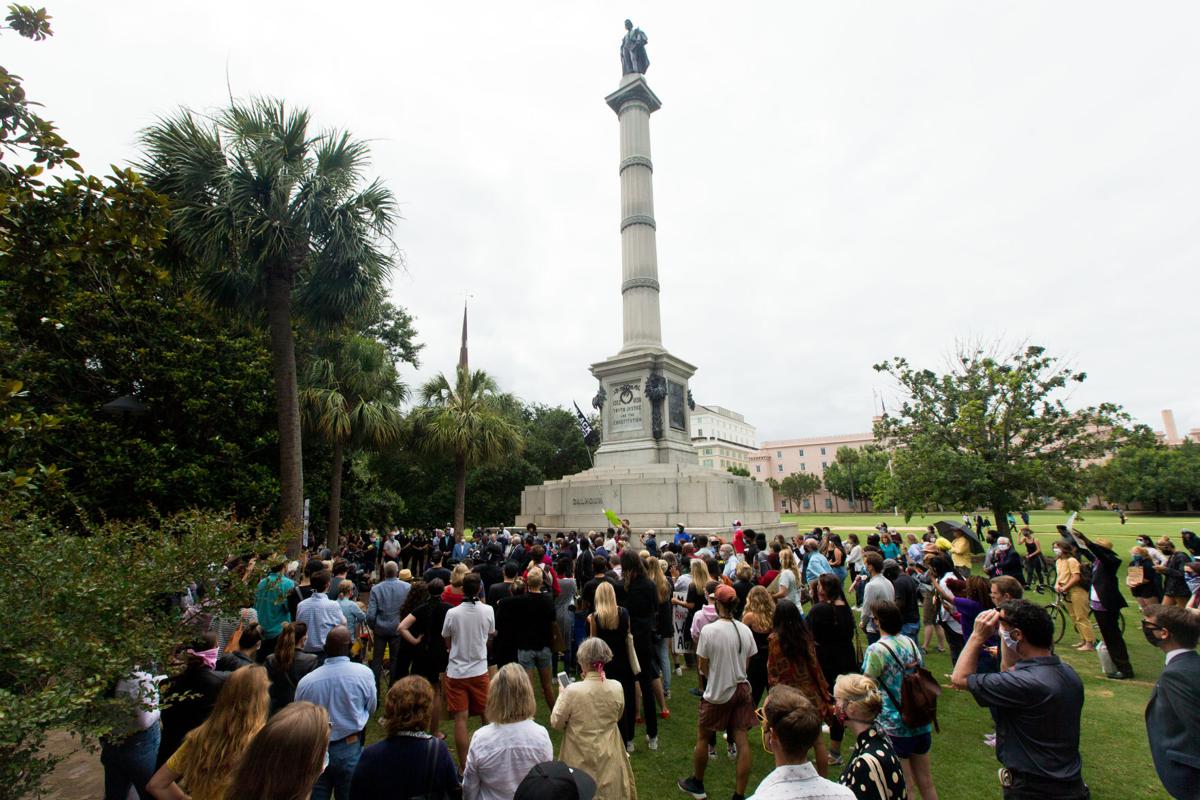 A crowd gathers at a press conference to take down the John C. Calhoun statue in Marion Square on Wednesday, June 17, 2020 in Charleston. Andrew Whitaker/Staff 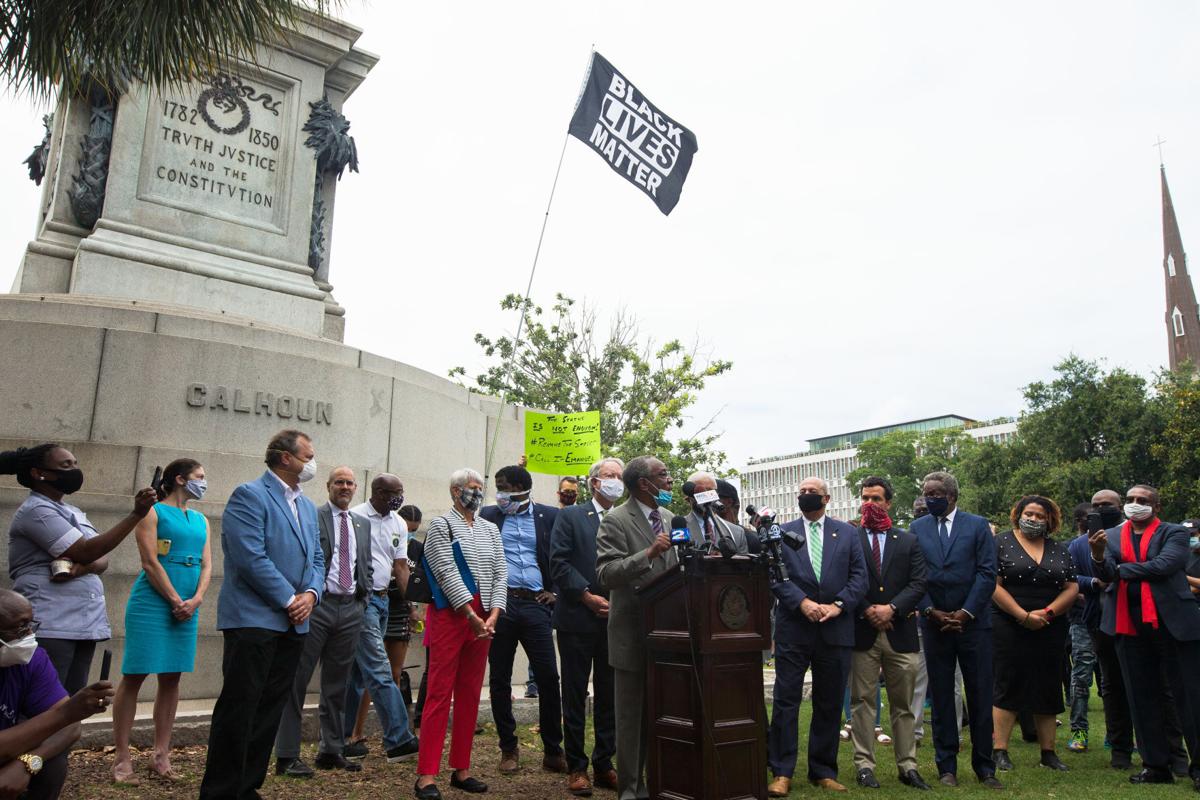 Council member Robert Mitchell one of the list of speakers at a press conference to take down the John C. Calhoun statue in Marion Square on Wednesday, June 17, 2020 in Charleston. Andrew Whitaker/Staff 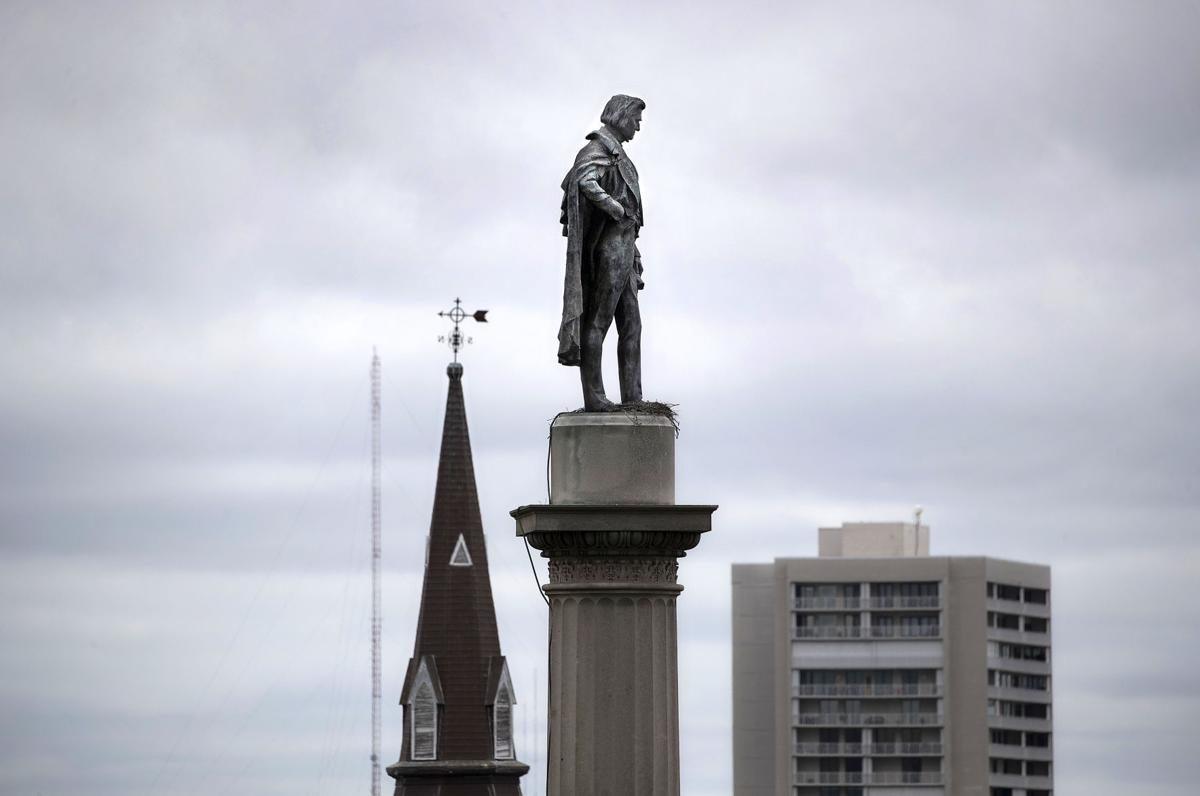 Mayor John Tecklenburg made an announcement on the five-year anniversary of the shooting at Charleston’s Emanuel AME Church, that the statue would be removed.  Grace Beahm Alford/Staff 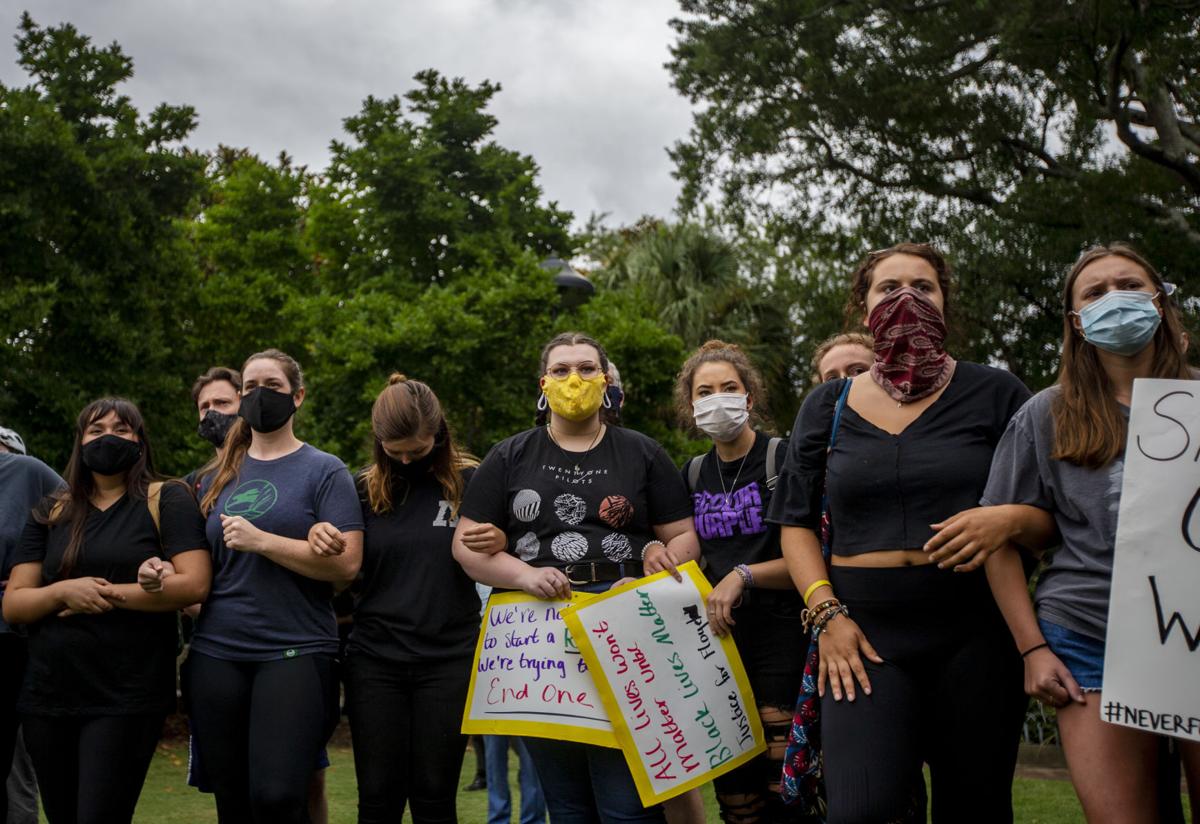 Trinity Griffin (center) calls for the Calhoun statue to be taken down during a protest Wednesday June 17, 2020, in Charleston. Gavin McIntyre/Staff

Mayor John Tecklenburg announces at a press conference to take down the John C. Calhoun statue in Marion Square on Wednesday, June 17, 2020 in Charleston. Andrew Whitaker/Staff

A crowd gathers at a press conference to take down the John C. Calhoun statue in Marion Square on Wednesday, June 17, 2020 in Charleston. Andrew Whitaker/Staff

Mayor John Tecklenburg made an announcement on the five-year anniversary of the shooting at Charleston’s Emanuel AME Church, that the statue would be removed.  Grace Beahm Alford/Staff

Nearly 124 years after it was erected, the John C. Calhoun Monument in Marion Square will come down and be relocated, Charleston's mayor said on Wednesday.

City Council members will vote to remove and relocate the statue during their Tuesday meeting, Mayor John Tecklenburg said.

Jubilation over the mayor's decision by those in the crowd at the monument's base set off hours of celebration, followed by vandalism of the memorial, graffiti and several arrests by Charleston police. Police closed Marion Square amid the turmoil but said it would reopen Thursday morning.

City officials said they expect the statue at the top of the monument would be removed in a relatively swift time frame after the council makes its decision. Tecklenburg said removal of the entire monument, starting with the statue, will occur in stages.

A challenge by state officials, citing a law enacted 20 years ago, is possible, but city officials said they're confident of a successful outcome if taken to court. Charleston's decision, and any case that might follow, could set a precedent for other cities grappling with whether they should remove similar memorials.

Tecklenburg's announcement came on the fifth anniversary of the shooting at Charleston's Emanuel AME Church, where self-avowed white supremacist Dylann Roof killed nine African American worshippers in a Bible study session in 2015. The church is just down the street from the Calhoun statue. The mayor paused his remarks and named the victims to pay honor to the moment.

In his statement, Tecklenburg called Calhoun "both South Carolina’s most prominent national statesman and its most consequential defender of slavery and white supremacy."

"That we as Charlestonians must reckon with Mr. Calhoun’s towering and deeply troubling legacy is a given," Tecklenburg said. "That we must allow his memorial to continue to divide our city while we do that reckoning, however, is not a given. And that is why, today, I will be sending our City Council a resolution calling for the relocation of the Calhoun statue to a local museum or other academic institution where that necessary and long-overdue reckoning can truly begin."

Who was John C. Calhoun?

Cheers followed and people shouted, "Take it down!" A few people booed, saying “No relocation!” and "Throw the statue away!"

“No longer will our council have its head in the sand as our children bear the brunt of this evil,” Councilman William Dudley Gregorie said of racism following Tecklenburg's statement. A committee impaneled to study racism and conciliation will recommend taking down other such statues, he said.

Later in the evening, a crowd taped up the memorial's base, mounted posters and spray-painted graffiti on it. Cheers and celebration in Marion Square lasted several hours, but police then made several arrests and the crowd left. The city was expected to clean up the statue, officials said.

The Calhoun Monument, 115 feet tall, towers above downtown Charleston. Its namesake was vice president under presidents John Quincy Adams and Andrew Jackson. He advocated for slavery as a “positive good” and died in 1850, over a decade before the Civil War began.

The statue has been unpopular since its first incarnation, defaced regularly by African American residents who felt the statue was meant to keep them "in their place." A much shorter monument built in 1887 was replaced in 1896 so that it would be unreachable.

Those years marked a period of widespread disenfranchisement of African Americans, during which many such monuments were erected as a symbol of the racial hierarchy.

Wednesday's announcement followed a week during which campaigns to remove the monument quickly gained steam.

On Tuesday, Charleston civil rights leaders and three lawmakers called for the memorial to come down, saying it was a symbol of hate.

A news conference on Wednesday echoed those calls. "If someone raped your wife, stole your children, sold you, would you want a statue of that person?" the Rev. Nelson Rivers III, a leader of the National Action Network, said on Wednesday.

A group of Charleston residents of all ages gathered in front of the monument Wednesday morning, again pushing for its immediate removal. One resident, Daron-Lee Calhoun II, spoke to the crowd about how Calhoun was the slaveholder of his ancestors for decades, yet he had to constantly see the statue in a place of honor.

"I never imagined in my lifetime that I would see it come down," Councilman Robert Mitchell said on Wednesday. He acknowledged the council would get a lot of pushback from those against removing the monument.

Michael Better, a leader for Black Lives Matter, spoke on Wednesday as well, saying he was looking forward to pointing out the relocated statue to his children. "That was the guy we tore down. He used to be in Marion Square above us. Now he's below us," Better said he would tell his children.

But removing the statue is only the first step, he said. "There's a whole lot of J.C. Calhouns in people's hearts that we need to tear down," he said.

The state’s Heritage Act could cause problems, depending on the state's interpretation of how it applies to the Calhoun monument. 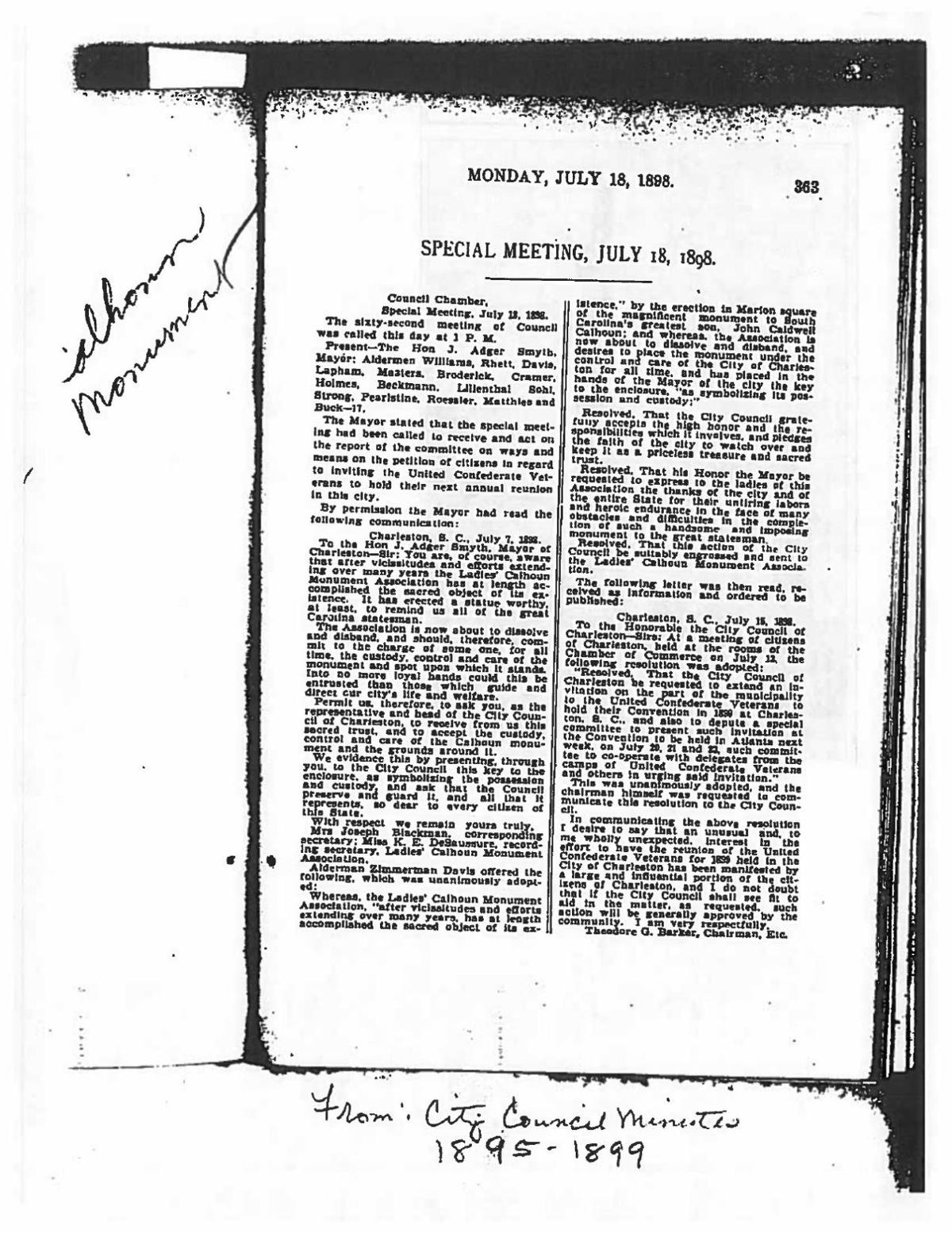 The law was part of a compromise that removed the Confederate battle flag from the Statehouse dome in 2000. It forbids removing or changing any war monument or memorial that is on public property.

Also, the law prohibits renaming or rededicating public property, including bridges, streets, parks or structures, honoring a historic figure or event. Changing anything covered by the law requires a two-thirds vote of the Legislature.

In the 20 years since it was passed, legislators have only taken up a Heritage Act issue twice, most notably when they removed the battle flag from Statehouse grounds in 2015. Many lawmakers have been opposed to any further discussions of issues covered by the act.

Tecklenburg said the city's legal team feels confident the Heritage Act does not apply to the Calhoun memorial. The monument belongs to the city but rests on ground owned by a private organization, the Board of Officers of the Washington Light Infantry and the Sumter Guard. Tecklenburg said the council has "full authority to order its relocation to a setting where it can be placed in its full historic context."

He said he called Gov. Henry McMaster's office to “express our resolve” but had not received a response by Wednesday afternoon.

“There seem to be some outstanding legal questions that will likely be addressed in the near future, but the governor believes these issues are most appropriately addressed by the General Assembly so the ultimate resolution has the force of law throughout the entire state," Brian Symmes, a spokesman for the governor's office, told The Post and Courier regarding the Calhoun monument.

A spokesman for the Attorney General's Office did not have a comment on Wednesday afternoon about whether the state would challenge Charleston's decision in court.

Three state lawmakers in Charleston said Tuesday that they believe the Heritage Act is unconstitutional and they are working on a bipartisan coalition to repeal it. State Sen. Marlon Kimpson and state Reps. Wendell Gilliard and David Mack III said it was overdue for legislators to take action.

Additionally, the South Carolina Legislative Black Caucus called on Wednesday for repeal of the law.

SC Heritage Act stands in way of removing Confederate memorials, but some push for repeal

James Underwood, who taught constitutional law at the University of South Carolina for decades, said he believes the Heritage Act does violate the state and federal constitutions.

According to Underwood, the law appears to violate Article 1, Section 1 of the S.C. Constitution, which vests political power in the people, who can modify their form of government at any time. "What the act seems to do is invest the power in a past body that no longer exists," he said. "It segregates it as something beyond the power of the people."

He said the law also seems to violate Article 8 by taking power away from local governments, as well as federal protections for free speech. However, he believes it would be hard to repeal the law politically.

Across South Carolina, protests over the death of George Floyd in Minneapolis have energized campaigns to remove memorials or namesakes that honor those involved in slavery and segregation.

This week, Clemson University officials asked lawmakers to allow them to rename Tillman Hall, named for a white supremacist who helped found the school. The University of South Carolina also is expected to ask for permission to rename a dorm named for J. Marion Sims, who experimented on enslaved women.

Seanna Adcox and Mikaela Porter contributed to this report.

(A) No Revolutionary War, War of 1812, Mexican War, War Between the States, Spanish‑American War, World War I, World War II, Korean War, Vietnam War, Persian Gulf War, Native American, or African‑American History monuments or memorials erected on public property of the State or any of its political subdivisions may be relocated, removed, disturbed, or altered. No street, bridge, structure, park, preserve, reserve, or other public area of the State or any of its political subdivisions dedicated in memory of or named for any historic figure or historic event may be renamed or rededicated. No person may prevent the public body responsible for the monument or memorial from taking proper measures and exercising proper means for the protection, preservation, and care of these monuments, memorials, or nameplates.

(B) The provisions of this section may only be amended or repealed upon passage of an act which has received a two‑thirds vote on the third reading of the bill in each branch of the General Assembly.

This week, we dig into how City Council got to its unanimous vote to remove the John C. Calhoun monument, what the statue symbolized when it was constructed more than a century ago, and why one of our guests says the city was creating new history, not erasing it.