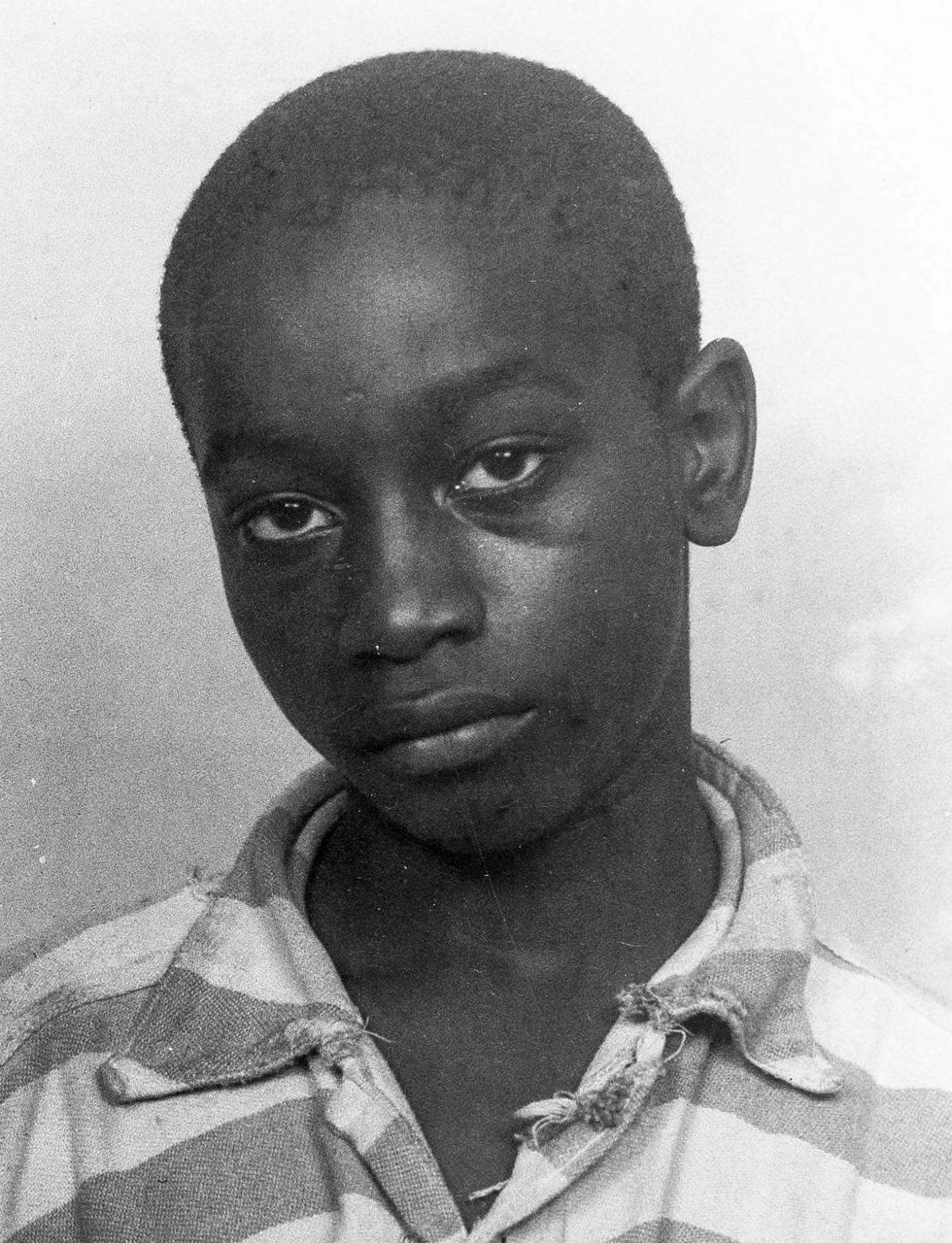 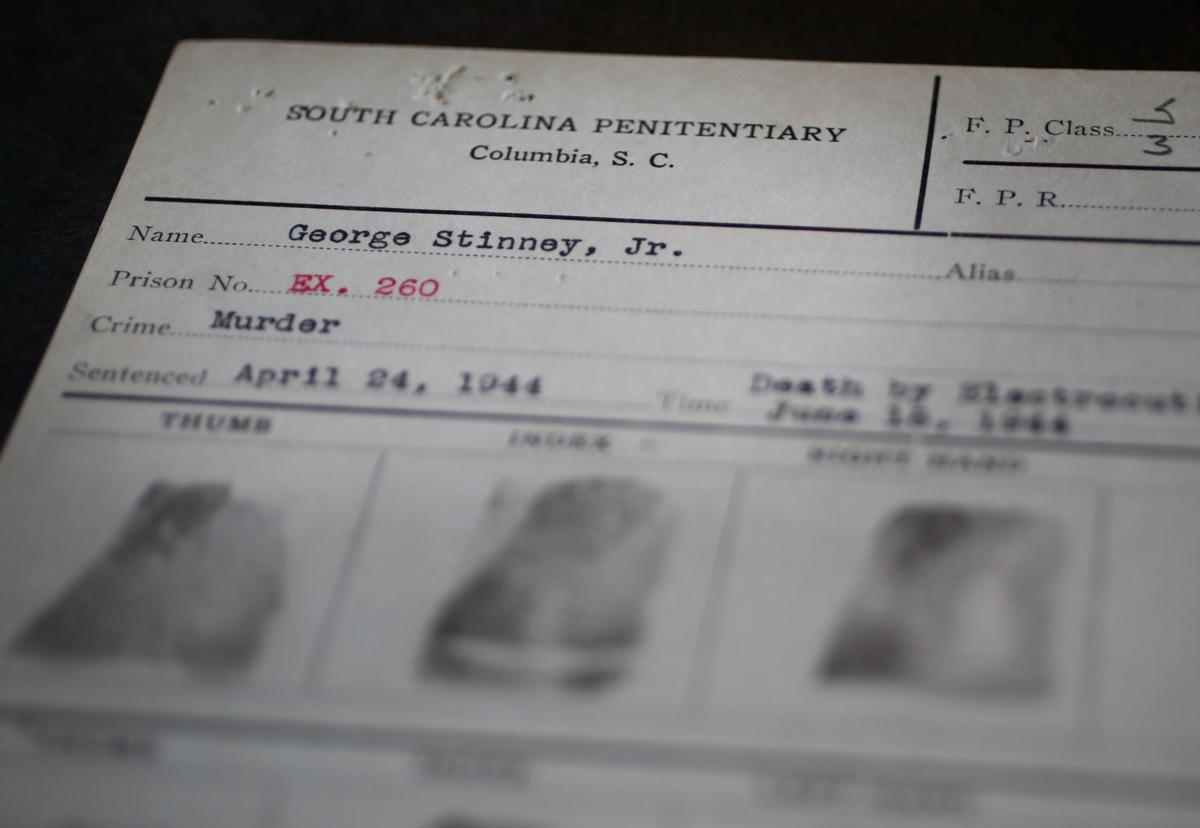 George Stinney Jr.'s fingerprints from 1944 are kept at the South Carolina Department of Archives and History. Michael Pronzato/Staff 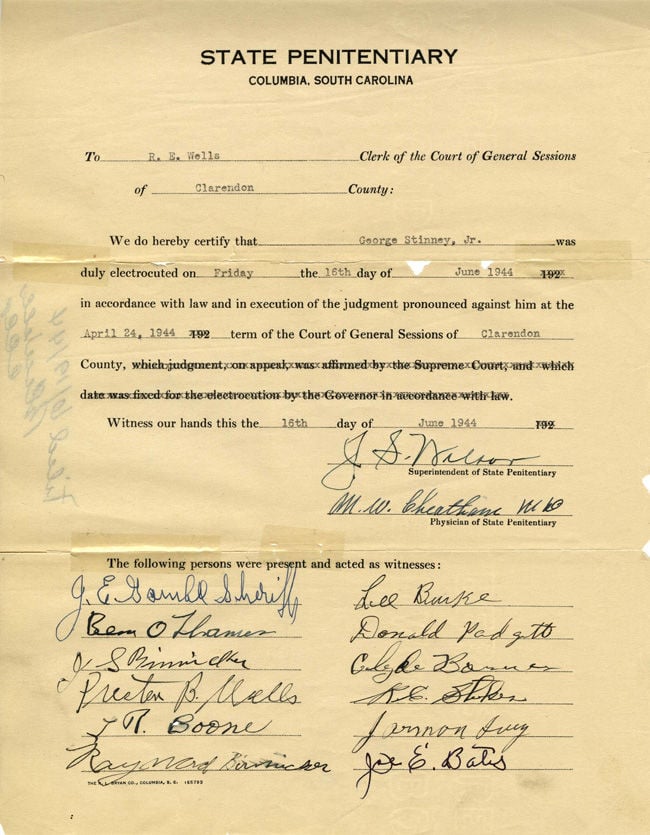 George Stinney Jr., 14, was executed in 1944 less than three months after his arrest. Courtesy the South Carolina Department of Archives and History. 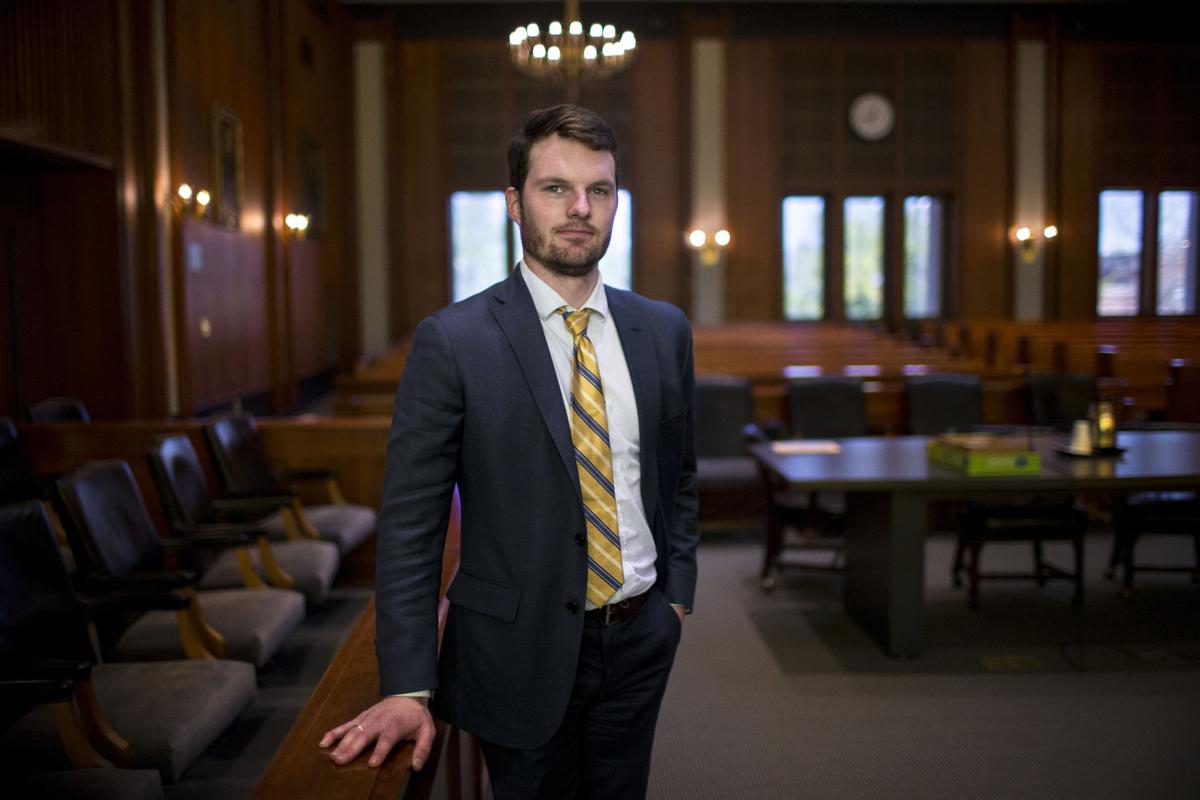 Matt Burgess, an attorney at a small-town firm in downtown Manning, became certain that there was no way 14-year-old George Stinney Jr. could have killed the two girls. Burgess and his boss, Steve McKenzie, made a long-shot request for a new trial. Andrew J. Whitaker/ Staff 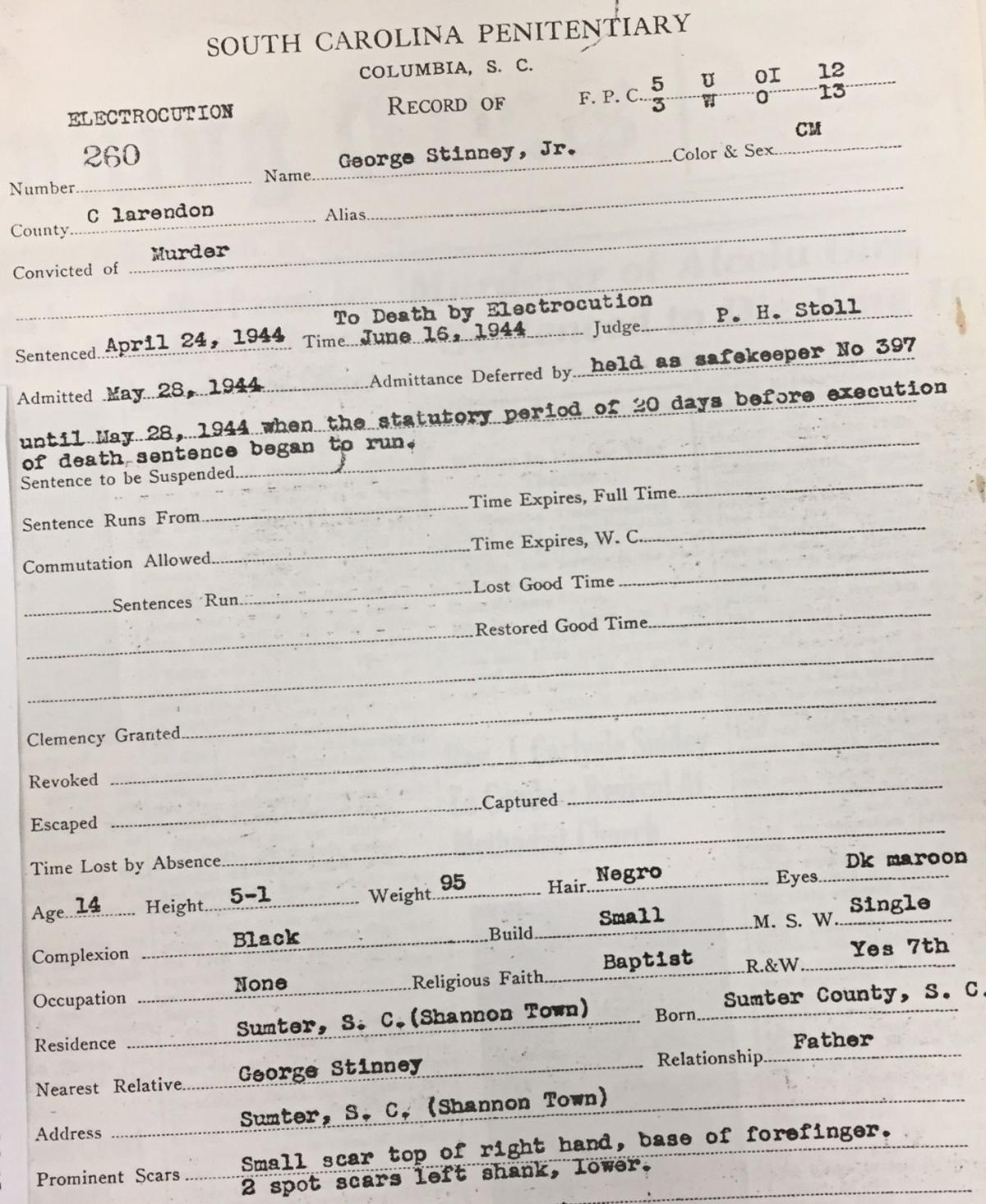 Attorney Matt Burgess scoured the historical record and noticed George Stinney's small size when he was executed. Courtesy of the collections of the South Caroliniana Library, University of South Carolina 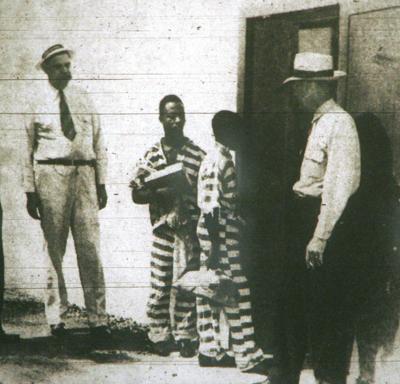 At 7:30 a.m. on June 16, 1944, inmate No. 260, dressed in a loose-fitting striped jumpsuit, was escorted to the little brick death house at the state penitentiary in Columbia, a Bible tucked under his arm.

George Stinney Jr. was so small, just 95 pounds, that the state electrician struggled to adjust an electrode to his right leg.

The Story So Far

George Stinney Jr. was a depraved child-killer to his executioners and an unrepentant predator in the press. Until new evidence revealed he probably wasn’t.

Read Part 1: In 1944, George Stinney was young, black and sentenced to die

A flurry of whispers fell over an audience of about 50 witnesses, including the two murdered girls' fathers and the white man later rumored to be the real killer. The prison superintendent rapped his cane on the concrete floor. Silence. An assistant captain asked the condemned prisoner if he had any last words.

You don’t want to say anything about what you did? the prison doctor asked.

The executioner pulled the switch then, and inmate No. 260 convulsed with 2,400 volts of electricity. The death mask covering his head slipped off his face. His eyes were open. Tears streamed down his cheeks. Saliva foamed around his mouth. A shot of 1,400 volts followed. Then another 500 volts coursed through his slight frame. The death house reeked of burnt flesh.

Three minutes and 45 seconds passed. Attendants carted away George Stinney’s lifeless body. Then, the visitors from Alcolu and Manning headed home, many rattled by what they’d just witnessed.

Lloyd Batson, a white pastor, left with them. At the request of George’s father, he had attended the execution. He’d promised to look George in the eyes before he died so that the child would know that someone in the room loved him.

Years later, Batson would bury his head in his hands, sobbing and moaning, recounting these moments. I can still smell it, he'd say, burning.

George’s execution closed the swift search for justice in the girls’ murders and cast it into the gloomy stacks of Jim Crow history. Seven decades would pass before someone re-opened it.

It sounded like a ghost story ripped from the pages of a Southern Gothic novel, and perhaps, that’s part of what drew Matt Burgess to the case. He was an idealistic, blue-eyed, 24-year-old attorney. He’d been one of “maybe 10,” he’d guess, English majors in his class at South Carolina’s iconic military college, The Citadel. A Camden native, he’d spent the months awaiting his bar exam results writing a murder-mystery novel set in Charleston.

It was a Friday in 2013. Burgess had graduated 10 months earlier from the Charleston School of Law, then landed his first job at a small-town firm in downtown Manning, a city of about 4,000. It came with a view of the Clarendon County Courthouse, where George Stinney was sentenced to die.

Burgess was working on a motion for a new trial for an African-American client who, it seemed, had been wrongly convicted of burning down an empty trailer. The man spent a decade in prison before a witness admitted to lying at trial. The apparent injustice filled Burgess with indignation.

His boss Steve McKenzie mentioned another case, even more infuriating than the one that had Burgess upset. A young black boy had been arrested for killing two white girls in a small town just a few miles away. An all-white jury had convicted him; a judge had sentenced him to die. At 14, George Stinney Jr. had become the youngest person executed in 20th century America, yet his story had all but faded from history.

McKenzie had taken up the case in 2009 after reading an article about George in the local newspaper, The Sumter Item. McKenzie did his own research and quickly concluded the boy’s trial was a sham. George’s court-appointed attorney, Charles Plowden — a Summerton banker vying to win back his Statehouse seat — had only needed to file a sentence-long appeal to stay his execution for at least a year. Instead, he’d abandoned the child, leaving him in the hands of his executioners.

McKenzie handed Burgess a flimsy file that had been gathering dust in his office for the past four years. Perhaps he could do something about it.

The file contained mostly black-and-white photocopies of old legal records — a pair of indictments, a fingerprint card, a page of handwritten notes — plus a couple of notarized affidavits and a collection of newspaper articles dating back to 1944. “Alcolu Negro Boy to Die For Slaying Girl,” blared one headline in The State newspaper.

Beyond George Stinney’s adolescent age, what most disturbed Burgess was the boy’s diminutive size. The South Carolina Penitentiary record listed George’s height as 5 feet 1 inch and his weight as 95 pounds.

Burgess wondered: Could a boy that small beat to death two girls, one of whom was roughly his size? Would he have had the strength to drag their bodies into a ditch? How could a black child living in the Jim Crow South commit such a brazen crime against two white girls in the middle of the afternoon without attracting attention?

And if George didn’t kill those girls, who did?

Burgess spent the weekend devouring everything he could find online about George and asking his friends in Manning if they’d ever heard of him. In the file he got from McKenzie, there was a deposition from Charles Stinney that gave Burgess hope.

On Monday, praying the old man was still alive, Burgess called a number in Brooklyn.

Charles Stinney picked up the phone.

Charles was skeptical; his sister Amie Ruffner, even more so. Folks had been calling for years with lofty plans to exonerate their long-dead brother, making promises they never kept.

Their brother George was buried in unmarked grave behind a white clapboard church in Pinewood, S.C. His burial plot remained a closely guarded secret among his siblings who still feared someone would try to desecrate it.

But George’s story had not stayed buried. Even before Burgess picked up the phone, the boy’s name had reemerged in the 1980s, as the nation’s legal system grappled with the constitutionality of juvenile execution. (The U.S. Supreme Court abolished capital punishment for juvenile offenders decades later in 2005.)

In 1985, anti-death-penalty attorney David Bruck had propelled George’s case back onto the national stage with a Washington Post editorial titled, “The 14-Year-Old Who, in Many Ways, Was Too Small for the Chair.” A year later, Bruck shared Stinney’s story again while testifying before a House subcommittee.

The memories of George’s siblings remained sharp when Burgess called them in October 2013. Despite their advanced age, they recalled those spring and summer months in 1944 with clarity. As Charles later attested in an affidavit, what happened back then had forever changed the lives of his entire family.

“Everyone recalls where they were and what they were doing when 9/11 occurred,” Charles had said. “For my family, Friday, March 24, 1944, and the events that followed, were our personal 9/11.”

As Burgess delved into the case, he worried that, legally, there was little the attorneys could do, no matter how convinced they were of George’s innocence. George had been dead for nearly 70 years. Any physical evidence, such as DNA, was long gone. Potential witnesses were dead or aging. Many of the official records chronicling George’s trial had been lost or destroyed. And if George’s siblings tried to move forward with a lawsuit, a judge would question their legal standing and the amount of time that had passed.

Burgess drafted a request for a new trial anyway, pointing to new evidence, namely the sworn testimonies of George’s siblings who provided alibis for their brother. Burgess knew it would be controversial and unprecedented to try and get George’s conviction tossed — and his legal argument was shaky at best.

But it was now or never, and this was his best idea.

He had another idea, too. Back at his office, he emailed the motion to a reporter at The Sumter Item and Mark Potter, an NBC journalist who had profiled the Stinney story in 2009. If any other evidence existed, perhaps a little publicity would bring it to light.

Another attorney at the firm warned Burgess about “chasing ghosts” when there was real money on the line. But Burgess was onto something. He just didn’t know what.

Rumors had been circulating for years in and around Alcolu regarding the murders of Betty June Binnicker and Mary Emma Thames. Some claimed officers had offered George ice cream in exchange for his confession. Several pointed to “Pee Wee” Gaskins, South Carolina’s most prolific serial killer, as the true culprit — a possibility Burgess quickly dismissed given that Gaskins lived 45 miles east of Alcolu and had turned 11 just days before the murders.

People who knew George, or claimed to know him, also offered wildly different portraits of the teen. His siblings described George as a quiet, gentle child with a talent for drawing and a fascination with airplanes. Others said George was a known bully with a history of violence toward other children.

George’s seventh-grade teacher, W.L. Hamilton, told The Sumter Item in 1995 that George was a “very withdrawn kind of boy,” but he had a temper, and once scratched a girl with a knife. Ruth Turner, a white woman and retired court reporter from Alcolu, said George once threatened to kill her younger sister and a childhood friend.

A white woman from West Columbia also reached out to the attorneys. Sonya Eaddy-Williamson already had begun investigating George’s case herself, and she had a theory about another suspect. She'd also heard rumors about a deathbed confession. So had other people.

Yet, that information, like most of what the attorneys heard, was hearsay or speculation — and therefore of little use to their case. Their hope of clearing George’s name dwindled.

Then the improbable occurred. An elderly black man in Manhattan saw Potter’s NBC report on television. Johnny Hunter was 87 years old, but he still remembered a long-ago stint in jail and the black child with whom he once shared a cell. Johnny recalled how small the boy was, and how young. He remembered one other detail: George Stinney had proclaimed his innocence up until the moment he took his final steps to the death chamber.

This would cast doubt onto George's confession, Burgess realized.

But would it be enough?