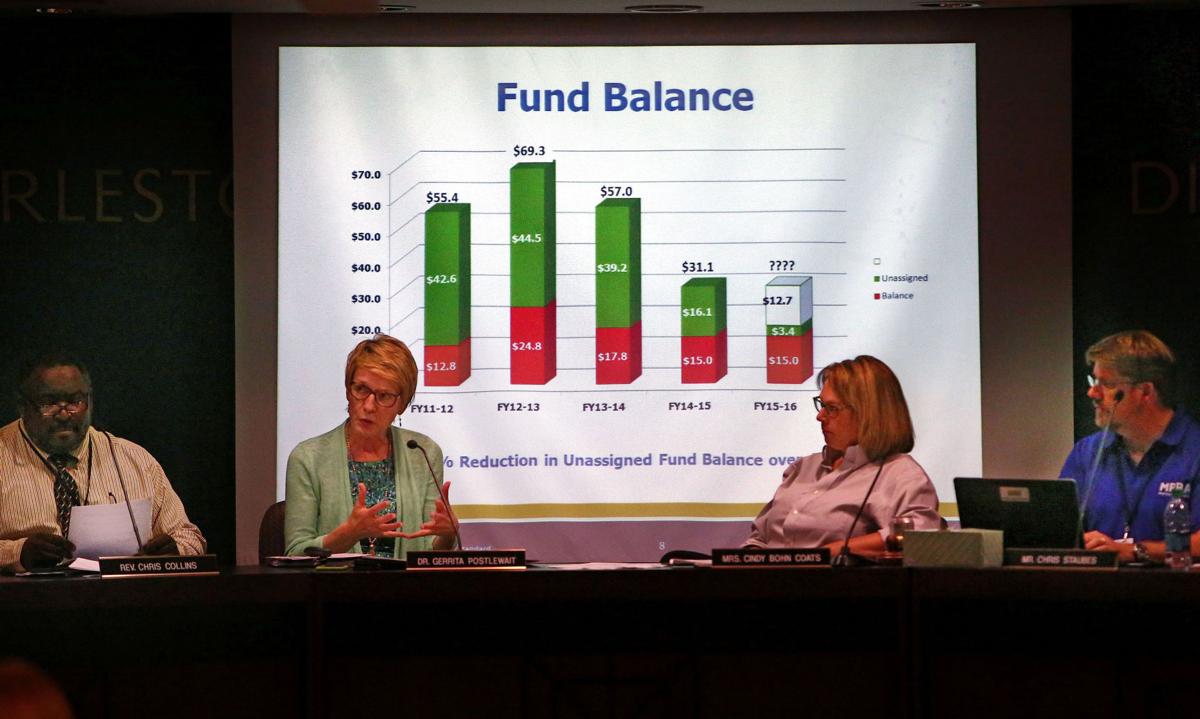 Superintendent Gerrita Postlewait discusses the Charleston County School District budget at a 2016 school board meeting. Plans in the Legislature to shore up South Carolina pension funds could cost the district $4 million in the budget year that starts July 1, 2017. File/Staff 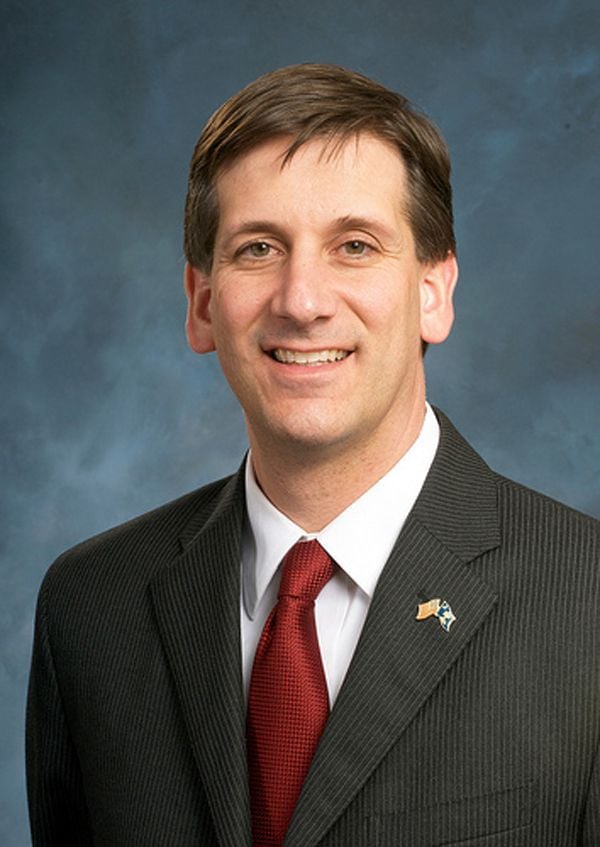 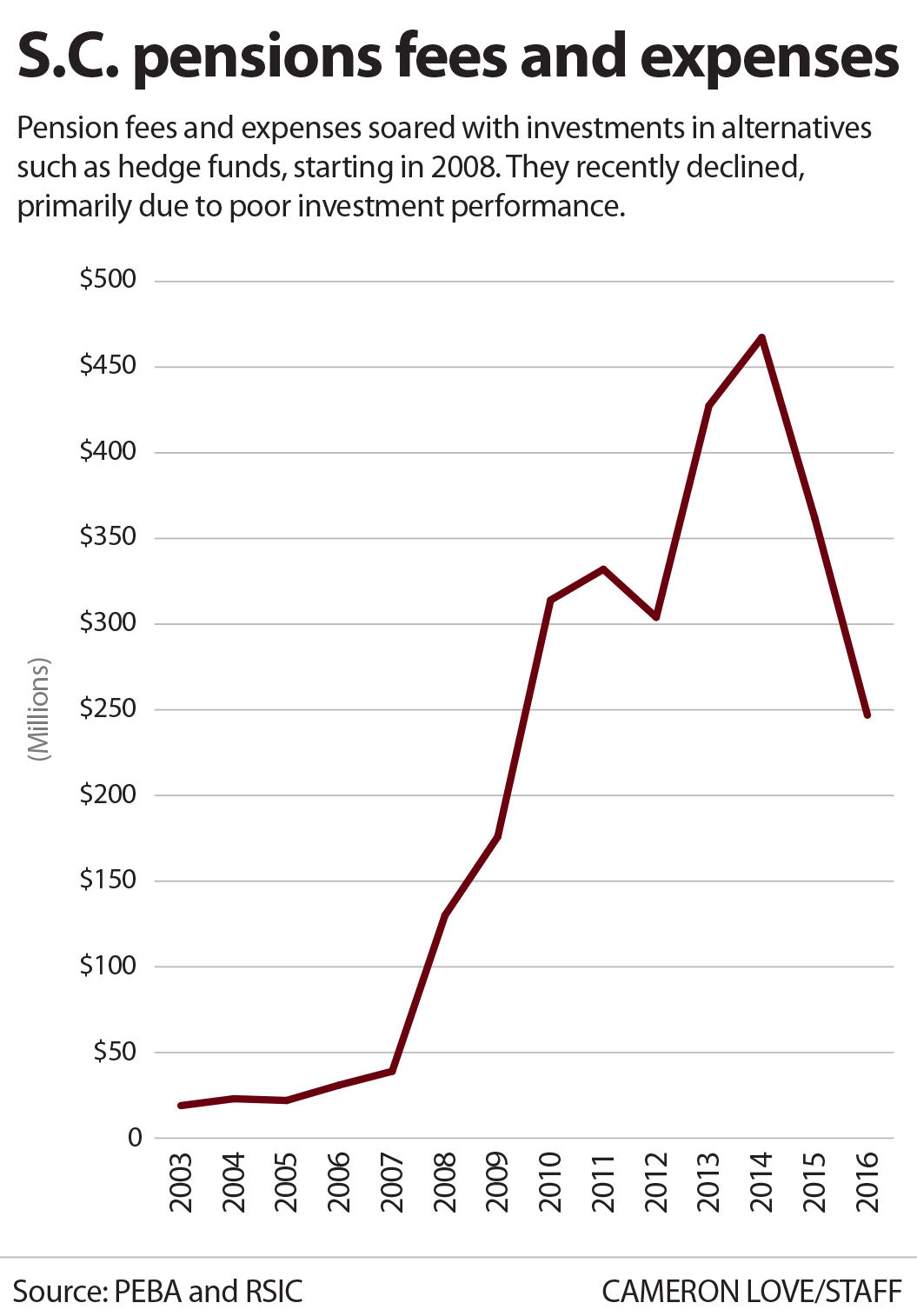 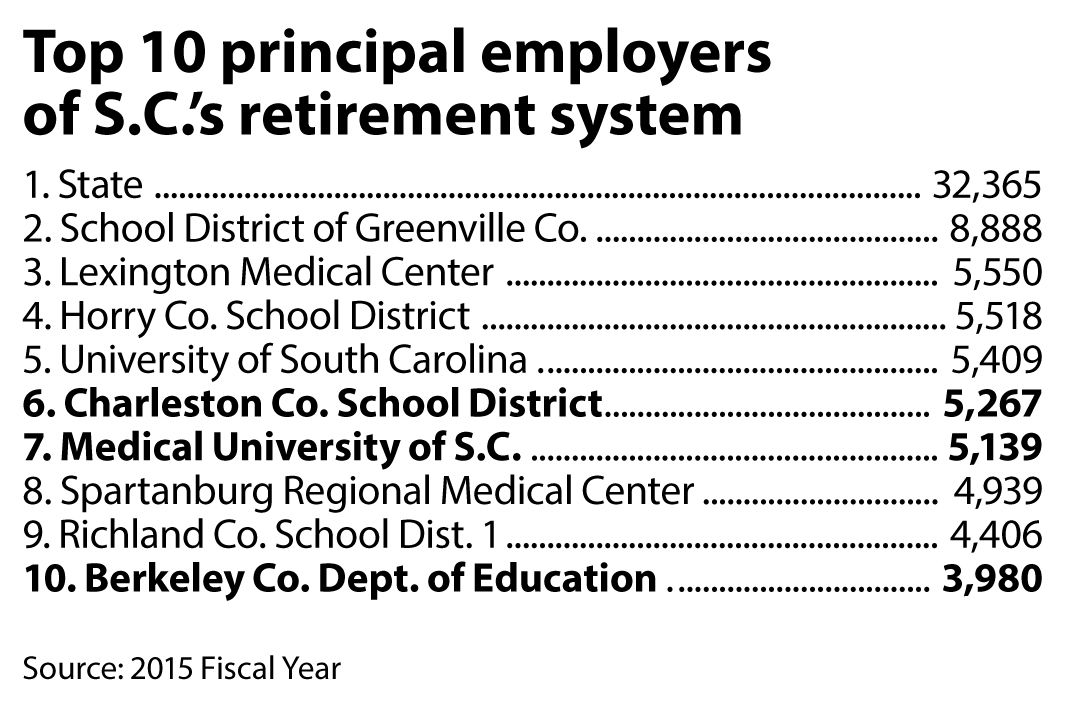 The governments in South Carolina that have the largest numbers of participants in the state-run pension plans. 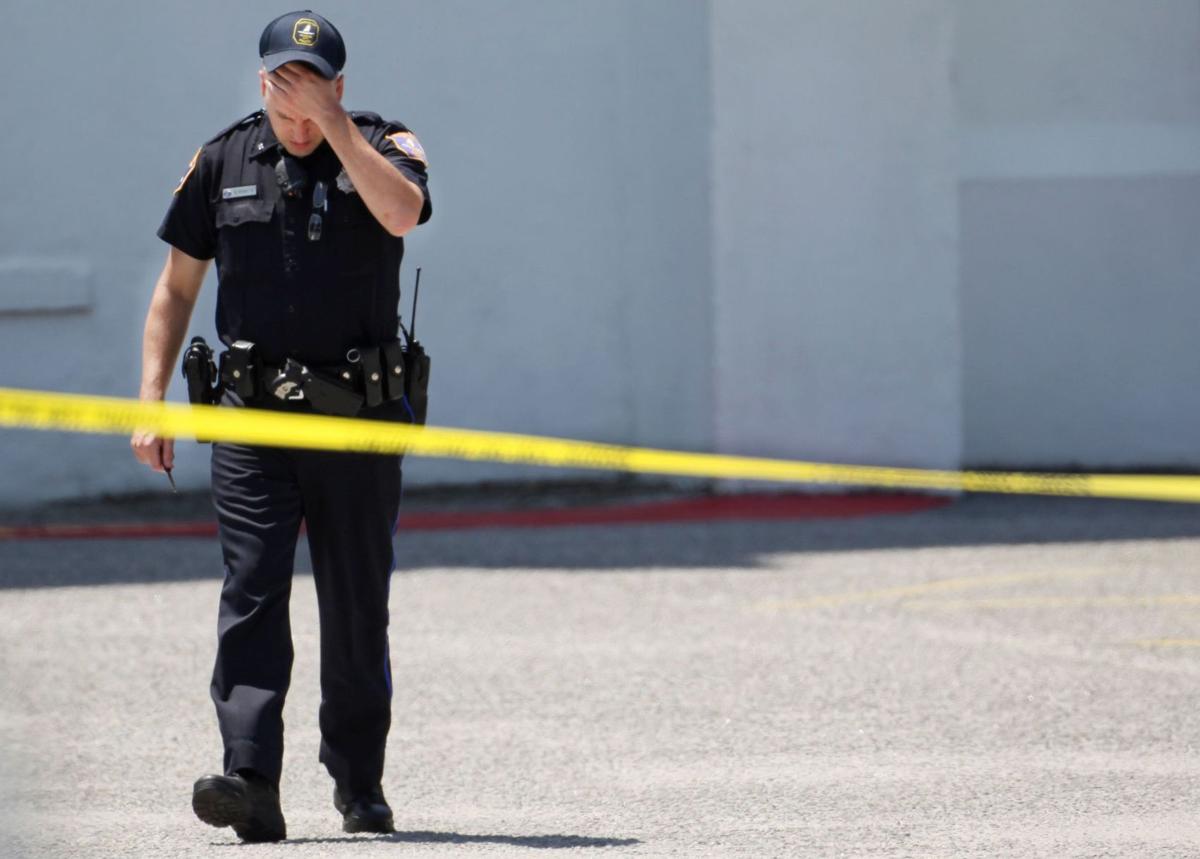 A police officer working out in the heat wipes his brow while patrolling the back of Emanuel AME Church on June 18, 2015, where nine were slain the night before. File/Staff

A plan to pump money into South Carolina’s ailing state-run pension plans, which serve one in nine residents, would spread financial pain to cities, small towns, public universities and hospitals across the state in less than five months.

Local officials said budgets may have to be trimmed, priorities reconsidered, and hiring plans forestalled as a result. Some also grumble about having to pour more local money into a state-run system they say has poorly managing its investments, contributing to a more than $24 billion funding shortfall.

"It would be pretty devastating to our budget," said Charleston County School District CFO Glenn Stiegman, who said its $4 million in potential added pension contributions roughly equals the cost of the district's plan to hire 56 elementary school teachers.

"We'd have to rethink that," he said. "We’d probably have to cut some positions in the district if that much money is needed in the retirement match."

Supporters of the pension reform legislation, which has powerful backers in the House and Senate, say it’s time to rip off the Band-Aid and address the long-term deficit before it gets any larger. The pension fund was worth about $28 billion last year, but that's far less than is needed to eventually pay retirement benefits to more than half a million participants.

"The bottom line is, this is going to cost taxpayers either way," said Rep. Bill Herbkersman, R-Bluffton, who co-chaired the state's Joint Committee on Pension Systems Review and introduced the House version of the bill. "We’ve got to get the funding portion fixed this year, because it keeps compounding."

As The Post and Courier reported in 2016, years of ill-timed investments and a refusal to abandon questionable strategies have left South Carolina's government pension plans on the ropes, with a massive funding gap that threatens promised benefits to future retirees. The state started to address the pension problems with a reform plan in 2012 that hiked contribution rates, tightened retirement rules, and trimmed future benefits, but the deficit kept growing, by billions of dollars.

This is round two. And as the proposed rate hikes move through the Legislature, lawmakers are having related discussions about potential state contributions to the local funding share in the coming year, as well as possibly closing the pension system to future employees — provisions that are not in the pending legislation.

“We’re fixing a problem we have now, but we can’t just keep going on and have to fix it again," Herbkersman said.

Government employees covered by the pension plans, who widely shared the pain of the 2012 reforms, would see one last increase in the contributions demanded from their paychecks, but their contribution rates would be capped going forward.

The employees would see a rate cap because they already face one of the highest pension contribution rates in the nation, one that consumes about a month of their pay each year.

"We’re one of the highest in the country, on the employee side, and we’re average to low on the employer side," said Sen. Vincent Sheheen, D-Camden, the other co-chair of the Joint Committee on Pension Systems Reform, and sponsor of the companion pension reform bill in the Senate.

Starting July 1, the legislation would require most employees — those in the South Carolina Retirement System plan — to contribute 9 percent of their pay. That's slightly less than a planned increase called for in December. Police officers and firefighters in the smaller pension plan for law enforcement would contribute 9.75 percent of their pay, as expected.

Participating employers — from the state government to local fire districts — would be required to contribute an additional 2 percent of pension-eligible payroll this year. That's four times the rate increase announced in December, and would come on top of the current 11.56 percent employer contribution rate for SCRS and the 14.24 percent rate for law enforcement pensions.

That means a town with a police officer would send $16.24 to the pension fund next year for every $100 paid to the cop, and that officer also would contribute an additional $9.75 from his or her pay.

The increase would amount to millions of dollars for an employer such as a large school district, city or public hospital. And that amount would rise in each of the five years that follow, by another 1 percent of covered payroll each year.

Folly Beach Administrator Spencer Wetmore said the pension contribution increase in just the coming year would amount to $189,600, consuming all of the small coastal city's expected revenue growth and "meaning it will limit all strategic initiatives for the city" and "could impact our ability to give employee cost-of-living adjustments."

"While we all recognize the importance of keeping this system solvent, this is understandably frustrating to local governments," Wetmore said. "It hits particularly hard in light of the underfunding of the Local Government Fund and proposed changes to business license revenues."

Since the recession, the state has kept portions of the Local Government Fund revenue that the Legislature had promised to give to local and county governments. The failure to keep that funding promise cost Mount Pleasant, for example, $619,423 in the most recent year, according to Town Councilman Elton Carrier. Proposed state changes in business licensing rules also could mean less money for local governments.

"I am very sympathetic to the fact that localities are not receiving what they should from the Local Government Fund," Sheheen said. But he said he is not sympathetic to complaints about funding the pensions, which he said is a responsibility of the employers, including local governments.

But local governments and other affected institutions are voicing concerns.

That's an unreasonable demand from the state, Newton said, "especially when you look at the mismanagement of the investments in the system."

The newspaper's analysis of the pension problems in December found that South Carolina has paid some of the nation's highest investment costs among state pension plans — averaging $361 million in fund management fees and other investment costs over the past five years — only to get results that were dead last over the decade ending in 2015.

"It is time the state Legislature stepped up to the plate and contributed some, if not all, to the shortfall," Newton said.

Herbkersman said lawmakers are discussing a plan for the state to spend $163 million to cover both the state's contribution increase plus half the increase faced by all other governments, which essentially means the full cost to local governments would arrive one year later. But that is not part of the pension reform legislation and would depend upon next year's state budget.

"Until the budget comes out, we won’t know anything for sure," said Melissa Carter, legislative liaison for the Municipal Association of South Carolina.

"The increase in employer contributions is very scary for cities and towns, as you can imagine, because they have little flexibility on revenues," she said. "Local governments have not had a voice in the decisions that got us to this point."

The reform plan also calls for structural changes to the state's Retirement System Investment Commission and creates new rules aimed at reducing conflicts of interest in the selection of investments. It does not specifically address the high investment costs paid by the state, but Herbkersman said that issue has not been forgotten and will be addressed in what he called "phase two."

The big 2-percent-of-payroll hike in pension contributions planned for the coming year would pump an estimated $236.4 million into the system from all government sources. However, last year the Retirement System Investment Commission paid out more than that — nearly a quarter-billion — for investment fees and management of the fund.

Skyrocketing fees, criticized as a transfer of wealth from South Carolina's workers to Wall Street, has concerned some lawmakers, as have the large bonuses paid to state-employed fund managers until the practice was ended several years ago.

"In phase two, I’m still recommending that there should be a criminal investigation into that," Herbsersman said. "The fees are killing us."

Pension system officials have said expensive, risky investments have been necessary to pursue the annual 7.5 percent investment returns mandated by the state, although such returns have rarely been achieved. The reform plan would reduce the official rate of return on pension investments to 7.25 percent, but Sheheen said the funding plan really assumes just a 4 percent rate of return for the next five years.

The 4 percent rate of return isn't mentioned in the legislation, Sheheen said, but "the way we calculated the package was based on that."

Expected rates of return are important because assumptions about how much money needs to be contributed to the pension plans are based partly upon how that money will grow over time. Lower rates of return, more in line with returns the state has actually achieved, require higher contributions.

The end of pensions?

A big question left for the next phase of discussions, which could begin later this month, is whether a state-run pension plan should be offered to future employees. Excluding new participants — and shifting to a defined contribution plan such as a 401k plan — would harm pension funding in the short term by cutting off the flow of new contributions, but it would provide more long-term certainty for the employers.

"That would not do anything to help our current pension system," Sheheen said.

The existence of a pension plan is seen as a recruiting tool that helps attract employees to generally lower-paying government jobs. The average employee in the pension system earns around $40,000, but retirees collect roughly half that amount every year through the pension plan.

Herbkersman said he anticipates "some push-back" on the idea of closing the pension system to future employees, but he fears that the alternative could trigger seemingly endless rounds of attempts at reforming and repairing the current system.