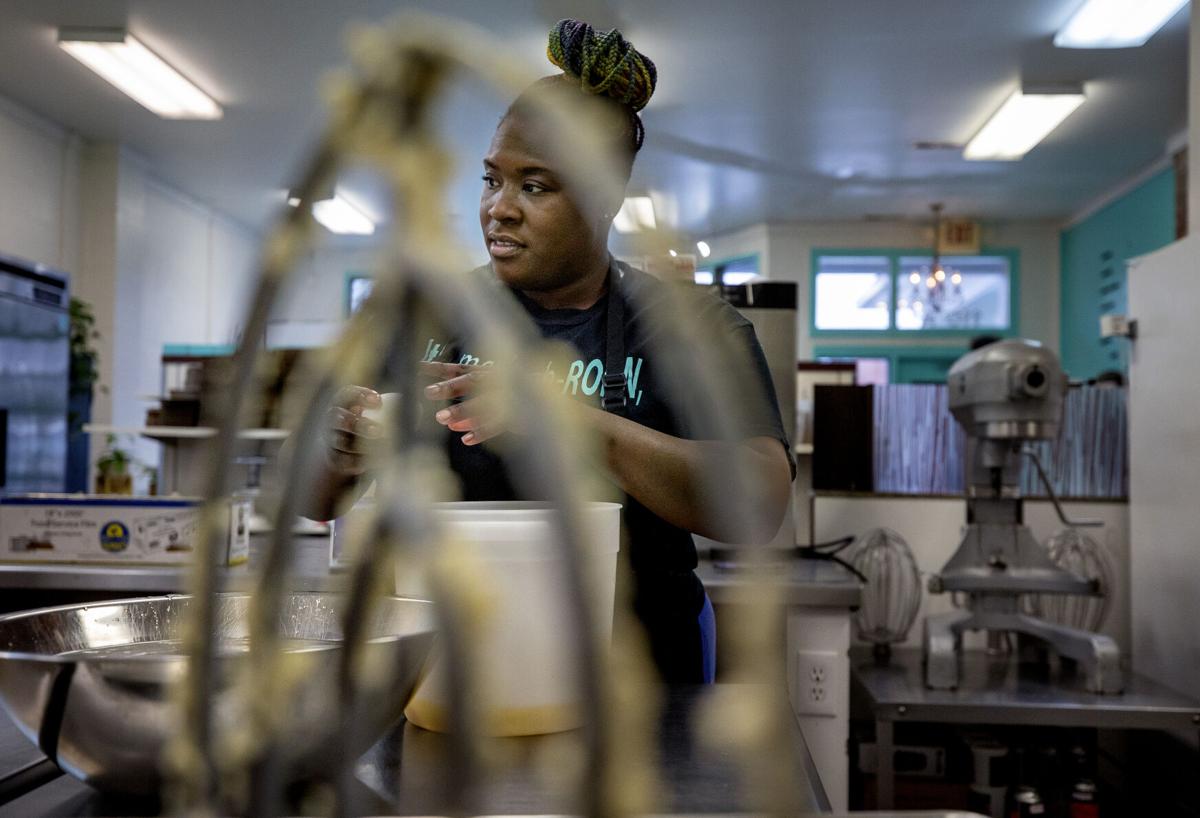 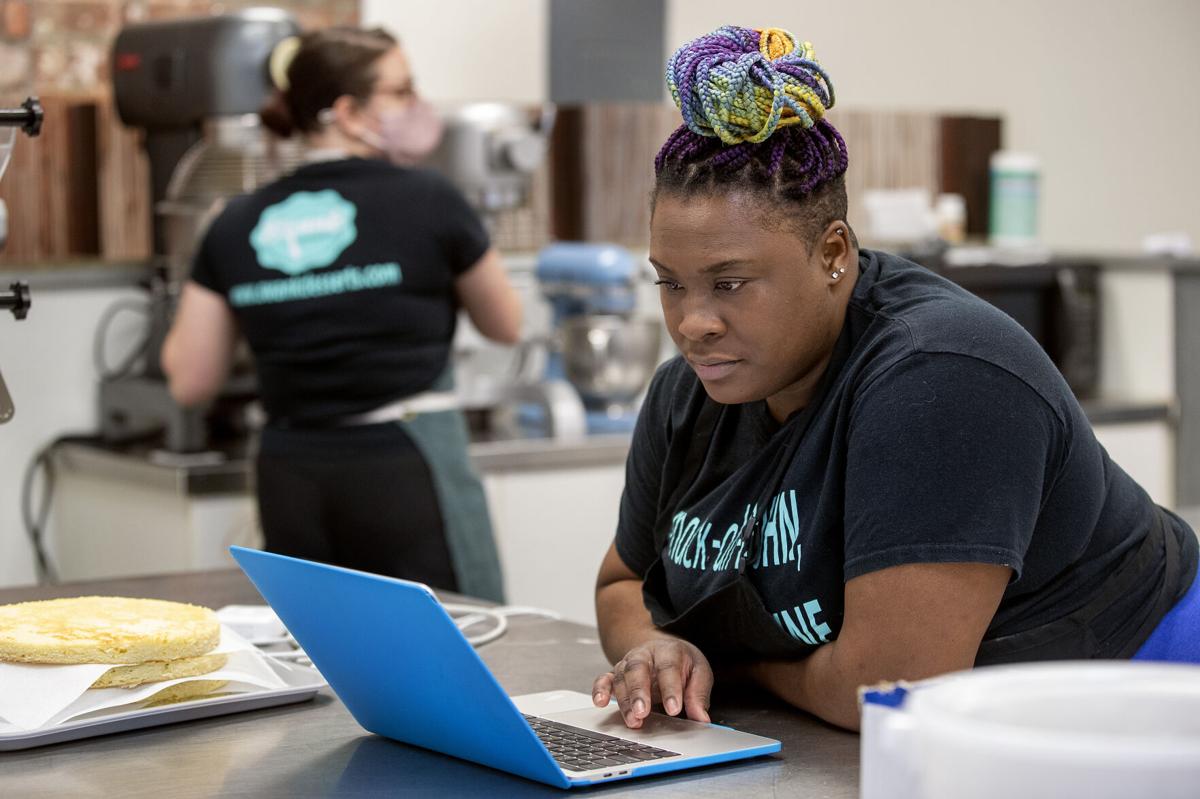 Danetra Richardson, owner of Swank Desserts on Cedar Street, works at her shop on Feb. 18, 2021, in Summerville. Grace Beahm Alford/Staff 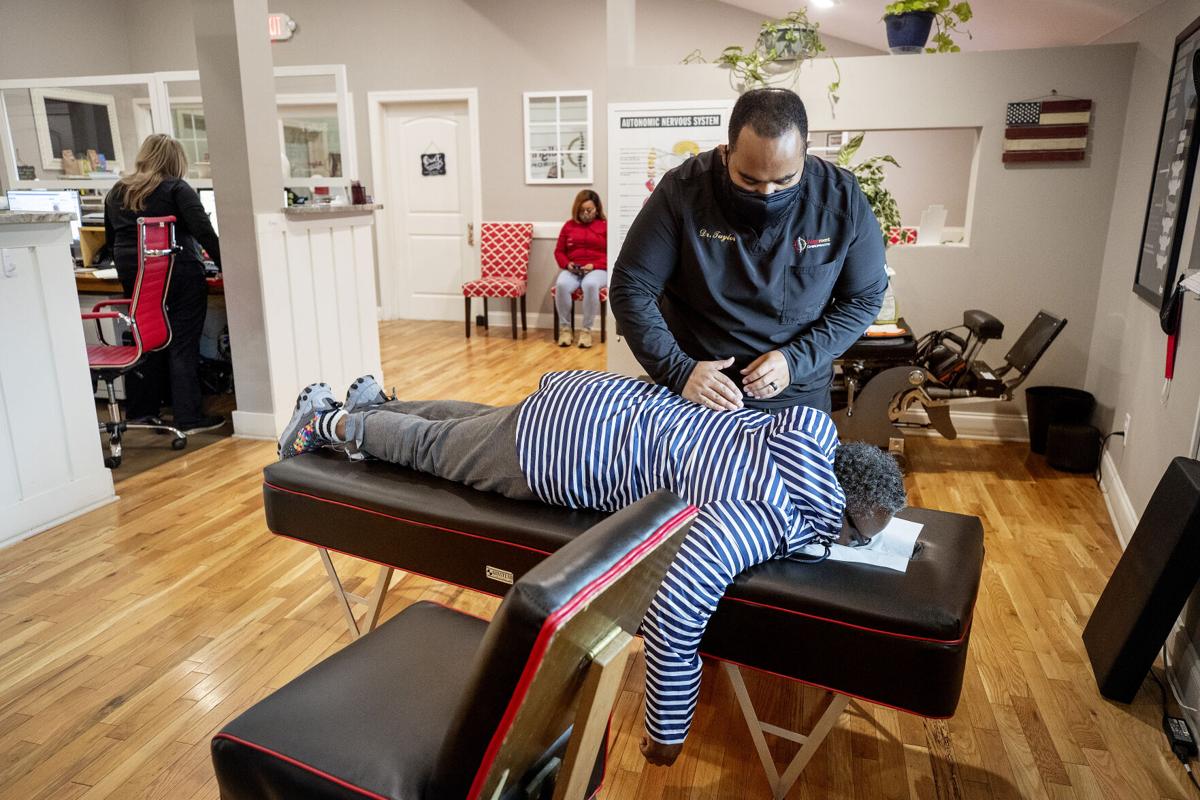 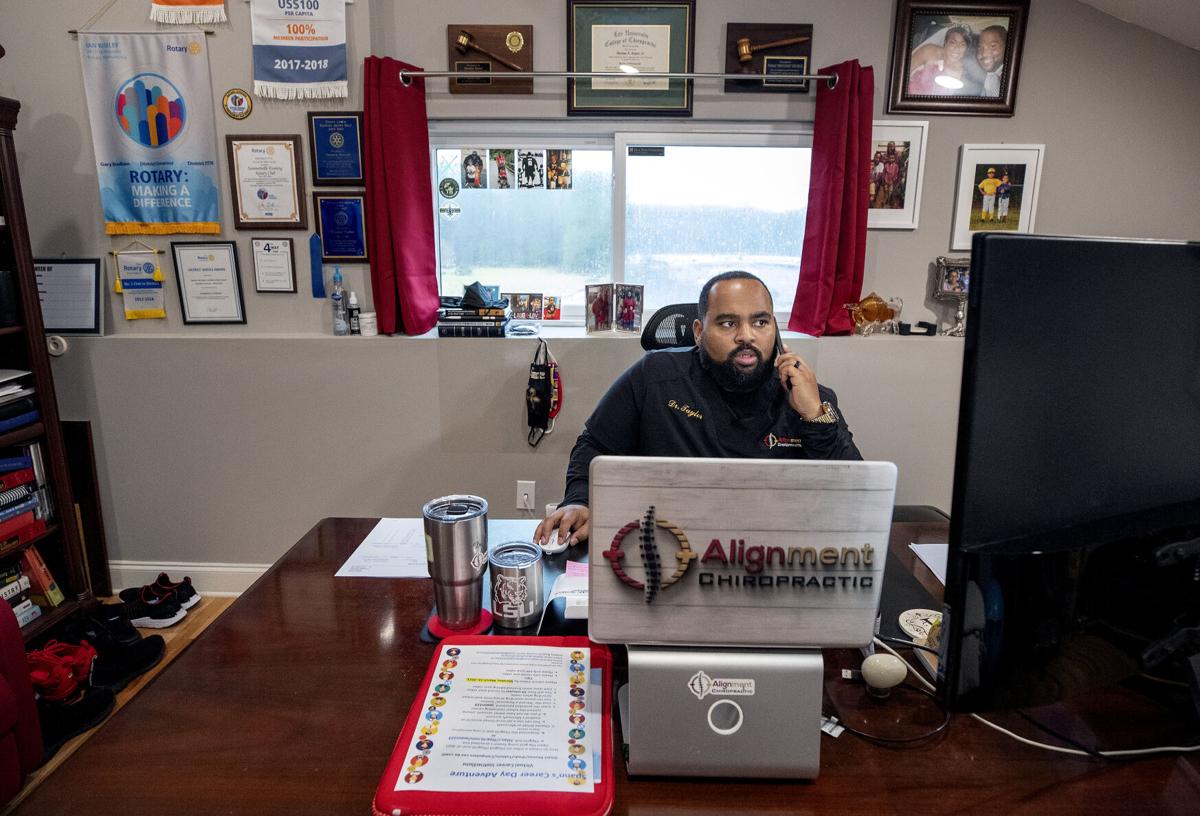 Today, some residents want to see a return of that feeling of communitywide support for Black businesses that has become diluted over time.

“We have to collectively work together to save our neighborhoods,” said Linda Saylor-Marchant, a longtime town resident and community organizer.

Summerville has seen tremendous growth over the years with more people and companies flocking to the Lowcountry's town in the pines. While that growth has created opportunities for business and entrepreneurship, some residents want to ensure support for Black- and minority-owned businesses.

Some Black residents also yearn for the days when it felt like entire communities rallied behind Black businesses, many of which stood side by side.

“That is because we simply did not have the opportunity to do business outside of communities of our own,” said Thomas Taylor, who owns Alignment Chiropractic.

The biggest barriers some owners said they see for Black residents often are a lack of awareness of resources and access to money for startups.

According to a 2019 study by the Federal Reserve Bank of Atlanta, 31 percent of Black entrepreneurs received approval for all of the loan applications and financing they applied for. This is in comparison to 49 percent of White entrepreneurs.

The ideal situation, some residents said, is one in which people are aware of what is available and what generates community support. For some, that starts with just letting people know what's possible.

"There are several of us who started our businesses from scratch," said Danetra Richardson, owner of Swank Desserts, a specialty shop in downtown Summerville.

Filling in a gap

Richardson opened Swank Desserts in 2019 through a detailed business plan, Kickstarter funding and a loan from the Charleston LDC, a community development lender.

She had always worked in restaurants and saw how popular the food business was in the Charleston area. But she said she didn't see as many dessert spaces.

This caught her attention after she was advised that some of the most successful businesses reached that point by fulfilling a need.

"That's kind of where the idea came from," she said. "It had to be exciting and different."

She landed in Summerville when her mother found space in the downtown area on South Cedar Street. It was a former cupcake shop, so preparing it for Swank Desserts didn't take a lot of work.

The biggest challenge after opening was just getting people to realize it was a different business. And though going through the first year of her business in the middle of a pandemic wasn't ideal, she said they were still able to build a supportive group of customers.

She and others also said that though it's exciting there are Black businesses in the area, there could be more. With Richardson, having money raised through Kickstarter was a huge help, she said.

That's also why the intent to support Black-owned businesses is so important to her. "It's just recognizing that we also need that support," she said. "Especially now during the pandemic."

On why there aren't more Black-owned businesses in the area, most agree it comes down to funding and knowledge of resources. "It can be very expensive," Richardson said.

Sam Skardon, director of development and policy for the Charleston LDC, agrees. One of the biggest factors is income inequality, he said.

The Black community in Summerville comprises 21 percent of the town's population. White residents constitute 72 percent of people in the area.

In the next 15 to 20 years, the town is planning to reinvest in the predominately Black area of Brownsville that neighbors the downtown area and Swank Desserts.

Town Councilman Aaron Brown, who represents the district where Brownsville is located, said there was a running list of minority-owned businesses in town that he started 15 years ago. He hopes to put more emphasis on that in the future since updated information isn't widely available now.

Bringing Brownsville back: Summerville to reinvest in historic Black community

The area was labeled a federal opportunity zone by the U.S. Economic Development Administration because of income levels. So businesses receive a special tax credit for investing in the neighborhood.

The goal in the coming years is to network with residents about the needs and considerations in the area. One of those is the support of Black-owned businesses.

Brown said there are also more Black community members on various boards in the area, so there has been an increase in inclusion. But Brown said he agrees there can be more outreach to Black entrepreneurship.

"I think we could actually put some more emphasis on it," he said.

Taylor opened Alignment Chiropractic in 2012 and is one of the few Black chiropractors in the area. While outreach is important, he said internal Black communitywide support is also extremely valuable.

"It’s going to be the fastest way to help minority business owners succeed in this area," he said.

Reflecting on the past

Linda Saylor-Marchant's mother, Violet Saylor, said she remembers a time where there were back-to-back Black-owned businesses in town. Cedar Street, where Swank Desserts now sits, used to be filled with them, she said.

Saylor graduated from Alston High School in 1954, the only high school available for Black children in the area at the time. The school was located where Alston-Bailey Elementary, on West Fifth North Street.

Alston High School's namesake, Dr. J.H. Alston, also was a renowned business owner, Saylor said. He had a general medical practice where the Dorchester County building on North Cedar Street is located. Most Black women in the area had their babies delivered there.

Now the historian of the Alston Heritage Foundation, she said Alston used the earnings from that practice to open Alston High School. Though she and many others said they obviously don't miss segregation, they do want to see something similar to that abundance of supported Black businesses because of the impact it has on communities.

"We had a lot of businesses," she said. "Black Jack Street was the old name of Cedar Street."

Saylor-Marchant, a Brownsville resident, is a retired librarian and author who routinely works with Summerville Kwanzaa. The organization does year-round work centered on Kwanzaa holiday principles, such as unity.

The organization hosted an outdoor gathering in December at McMichael's, a former grocery store-turned-catering service and one of the oldest Black businesses in Summerville.

It was a chance to safely bring together Alston High School graduates amid the pandemic and support a Black business. Saylor-Marchant said the goal was to encourage that community support of Black entrepreneurship. "We just hope the younger people will carry the torch," she said.

Taylor said that when he started Alignment Chiropractic,  there was a lot of work getting over stereotypes. There were situations where people, regardless of race, raised concerns over realizing he was a Black man.

But now that he has gained some of that trust, he is working with other owners to create an environment where battling a stereotype isn't necessary.

He is also looking to build a diversity and inclusion program within the Greater Summerville/Dorchester County Chamber of Commerce.

"We understand that, as a united community, we can truly make a difference," said Rita Berry, chamber president.

Taylor said the network will provide more resources for people, even when their businesses potentially struggle. "Truth be told, we don’t have a lot of chances to fail," he said.

He also agrees a variation of the communitywide support of businesses that was seen in the past is important. So he would like to see a resurgence of it.

But he and Richardson emphasize this doesn't mean not supporting businesses owned by other people but more mindfulness and intent when it comes to Black residents.

In North Charleston, most people pick up on the high number of Black-owned businesses. Richardson said she isn't sure why that's the case, but her guess is that it's the population.

And that might be a factor. North Charleston is a predominantly Black city, with Blacks making up nearly 50 percent of its residents.

Cindi Rourk, vice president of lending and business development at Charleston LDC, said she also guesses that awareness of educational resources is a factor, too.

But those resources aren't North Charleston-exclusive and that's why many agree that awareness of them is so important.

While many residents want to see a large number of  minority-owned businesses in the future, they agree it starts with building a network.

Richardson, Alyshia Jackson of Addie J. Beauty and Valinda Miller of Turning Page Bookshop are all Black women in Summerville who received a loan from the Charleston LDC.

The first requirement for getting a loan through that organization is being denied one from a bank. Rourk said a highlight of the system is that those women can become mentors for others and introduce them to resources.

Supporting minority-owned businesses is important because it helps break cycles of poverty and build generational wealth for communities, she said. Often, she said, people assume they don't have what it takes to start a business or even get funding from Charleston LDC.

The group encourages people to reach out for help and take advantage of as many of the educational opportunities as they can.