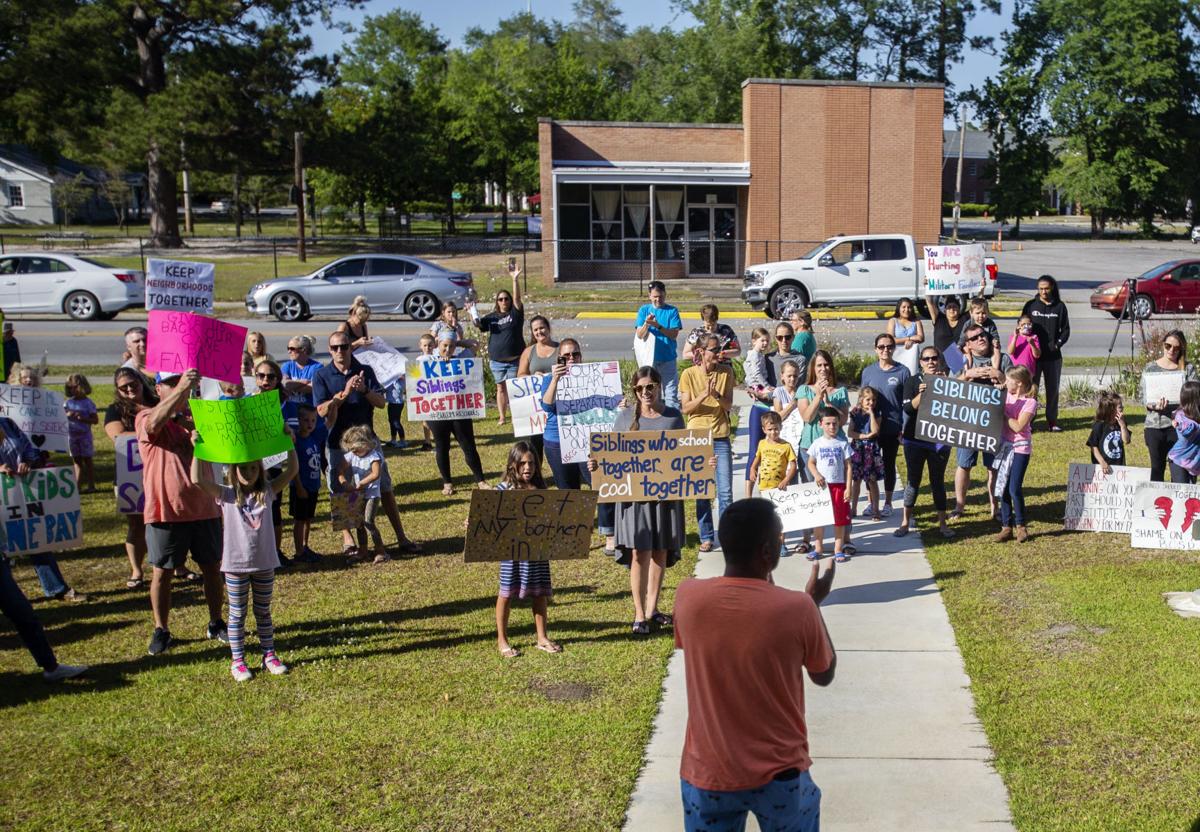 Families from Cane Bay stand in front of the Berkeley County Education Center to protest rezoning on Tuesday, May 12, 2020, in Moncks Corner. File/Gavin McIntyre/Staff 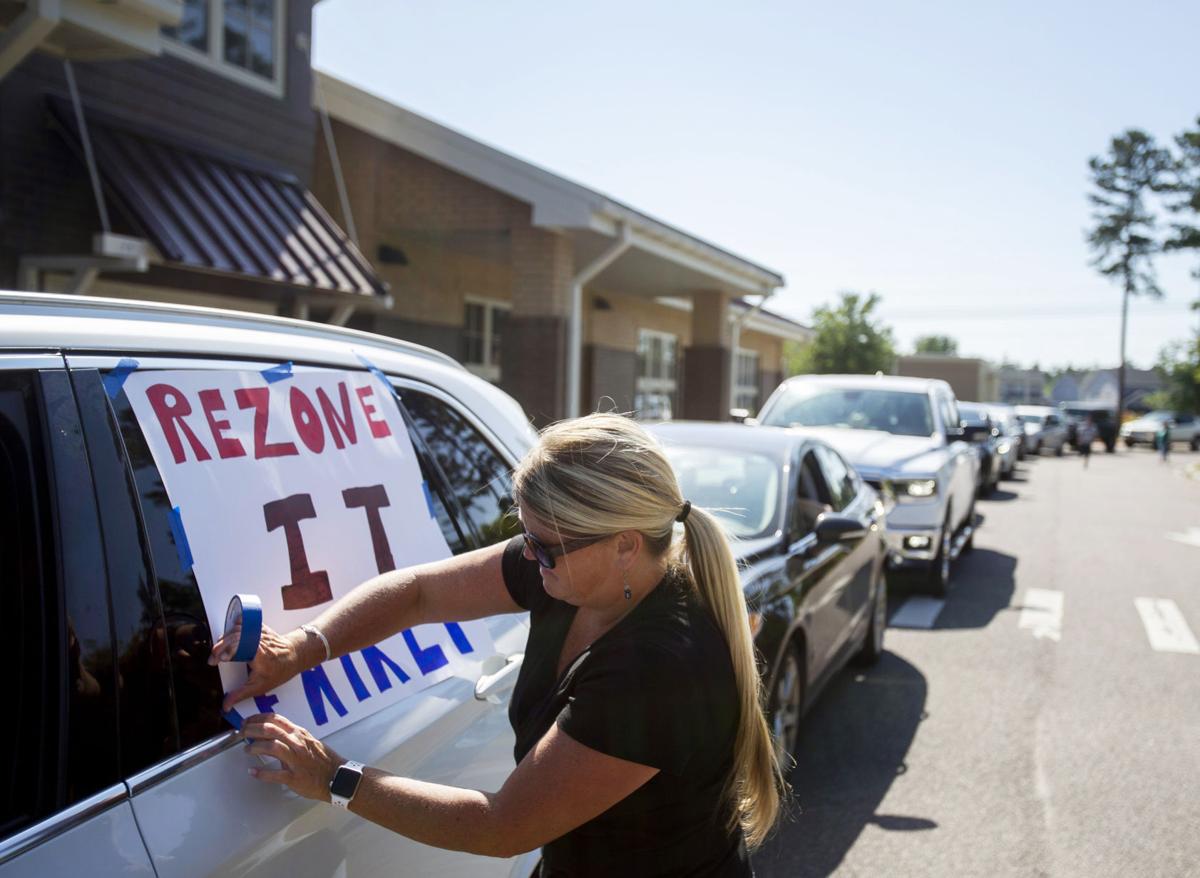 Sandy Brewer attaches a sign saying “REZONE IT FAIRLY” on her window before driving to the Berkeley County Education Center to protest rezoning while at Cane Bay Elementary School on Tuesday, May 12, 2020, in Summerville. File/Gavin McIntyre/Staff 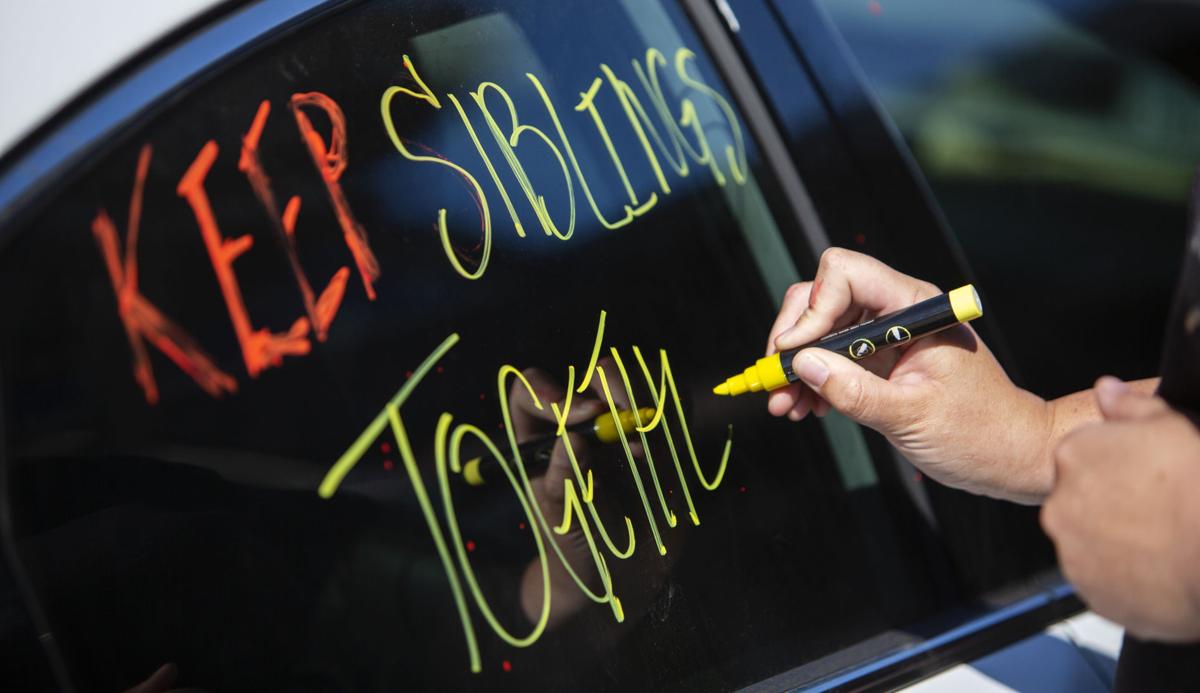 Heather Begley-Koegler writes “KEEP SIBLINGS TOGETHER” on her window to protest rezoning while at Cane Bay Elementary School before driving to the Berkeley County Education Center on Tuesday, May 12, 2020, in Summerville. File/Gavin McIntyre/Staff

Frustrated by new attendance policies designed to reduce overcrowding in Cane Bay schools, some Berkeley County parents are considering pulling their children out of the public school system entirely.

After a lottery drawing put over 50 Berkeley County kindergartners on a waitlist for coveted spots at Cane Bay Elementary School, some families said they've decided to homeschool their children or send them to private schools in the fall.

Parents say Cane Bay schools are some of the best in the area, and many bought houses specifically so their children could attend them.

But even those who were lucky enough to secure slots for their children said they felt frustrated by the changes implemented by the school district meant to relieve some of the Summerville schools' overcrowding.

New enrollment caps, redrawn attendance lines and the kindergarten lottery system have sparked passionate protests from parents for weeks. Earlier this month, community advocates organized a protest outside the Berkeley County Education Center to voice their disapproval of the changes.

Hundreds of families tuned in to watch Monday’s live-streamed kindergarten lottery drawing, where numbered slips of paper pulled out of a glass bowl determined who got a spot at the elementary school and who did not.

Fifty-one students were ultimately put on the waitlist.

Making things more difficult: if a family already had one student enrolled in a Cane Bay school and a rising kindergartner hoping to attend next year, there was no guarantee that the kindergartner would be offered a spot.

"It's heartbreaking that we are in this position,” said Heather Reed, whose daughter did not get a spot during the lottery. Reed has three other children in the Cane Bay school system, including a rising third grader at the elementary school.

Now, her two elementary school children will likely be forced to go to different schools. Reed said she’s considering homeschooling as a result.

The Berkeley County School Board voted in December to place enrollment caps at the elementary and middle schools to manage the overcrowding in Cane Bay. All students who were enrolled at the schools at the time of the board’s decision had a definite spot next year. There were few guarantees for everyone else.

The school district said it implemented the kindergarten lottery system to make the selection process more equitable for families.

Originally, students would be accepted on a first-come, first-served basis; parents would complete part of the registration process online before presenting the required documents in-person at the school.

Those who showed up earlier had a better shot of securing a spot for their child. But concerns about large groups congregating outside the school during a global pandemic is what led district officials to reconsider the selection process.

A major point of contention for many families is they were still wait-listed even though they had purchased a house within the school’s attendance zone.

Shaeleen Clark said her family spent a year researching Cane Bay schools before moving to the area in March 2019. The school’s reputation is specifically why her family purchased a home in an area zoned for Cane Bay.

After her son Andrew, who has chronic heart problems, was ranked 35th on the waitlist, Clark said she made the difficult decision to homeschool him in the fall.

“There's no other choice for us. If he can't get into Cane Bay, because of his health issues, it’s too much for us,” Clark said.

The district has previously said students who did not make the lottery cutoff would be provided with transportation to Cane Bay schools, where they would then board a second bus to take them to Westview schools in Goose Creek.

Clark worried the bad traffic and long commute would mean Andrew would need to leave for school before 6 a.m. and wouldn’t return home until around 5 p.m.

“For a five year old with a heart condition, I’m just not OK with that. And I don’t think that’s fair for any kid, period,” Clark said.

“The kids that live in Carnes Crossroads will be passing these kids," said Katie Polk, referring to a new Goose Creek subdivision. "As they come into Cane Bay, our kids are leaving."

To help with the overcrowding, the school district has entered into an agreement with the Carnes Crossroads developers to build a new K-8 school within the community, although specific timelines and details have not been released.

Polk, whose rising kindergarten student sits at No. 47 on the waitlist, said her family can’t afford private school. She contemplated homeschooling but said it wasn’t a viable option for her daughter, who thrives in social situations.

“She will be going to a different school than the other three kindergartners that are a few houses in either direction,” she said. “These are the children she will grow up playing with and they won’t be going to school together.”