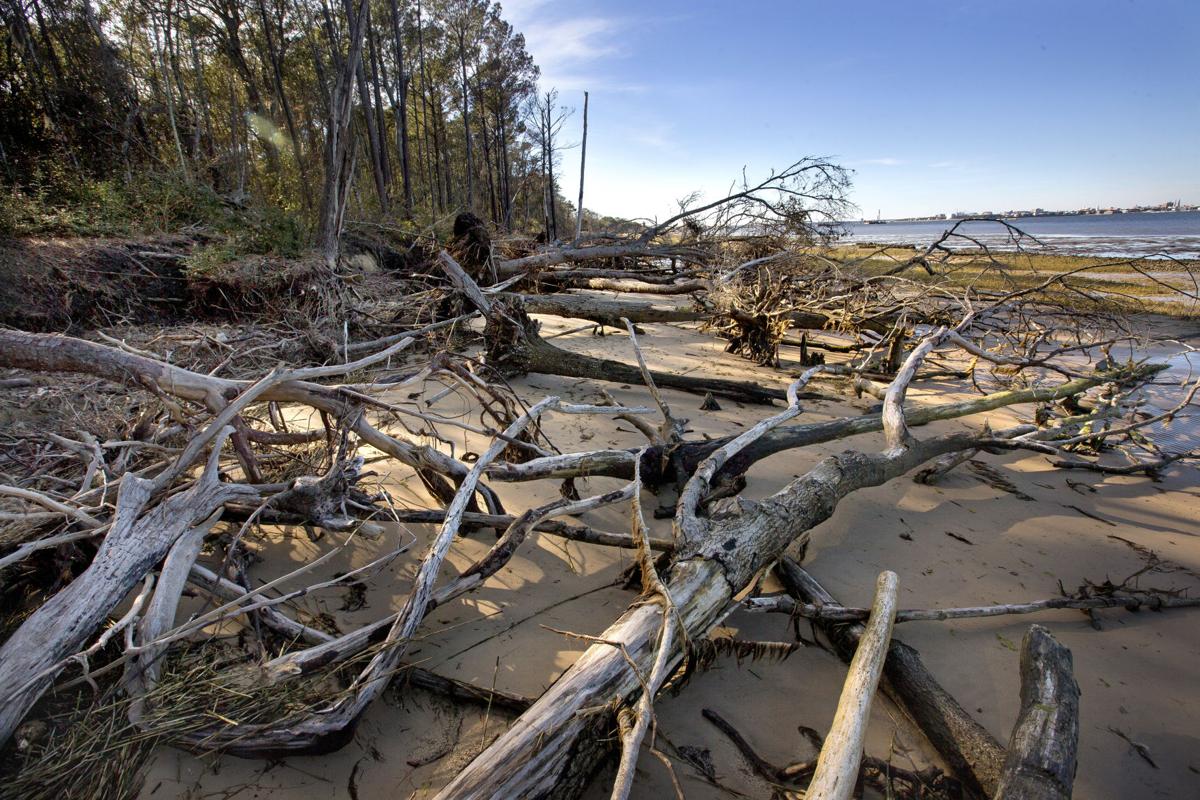 A boneyard of dead trees by erosion are scattered along the beach at Fort Johnson in Charleston Harbor, near the state Department of Natural Resources office Monday, Jan. 31, 2018. Andrew J. Whitaker/ Staff 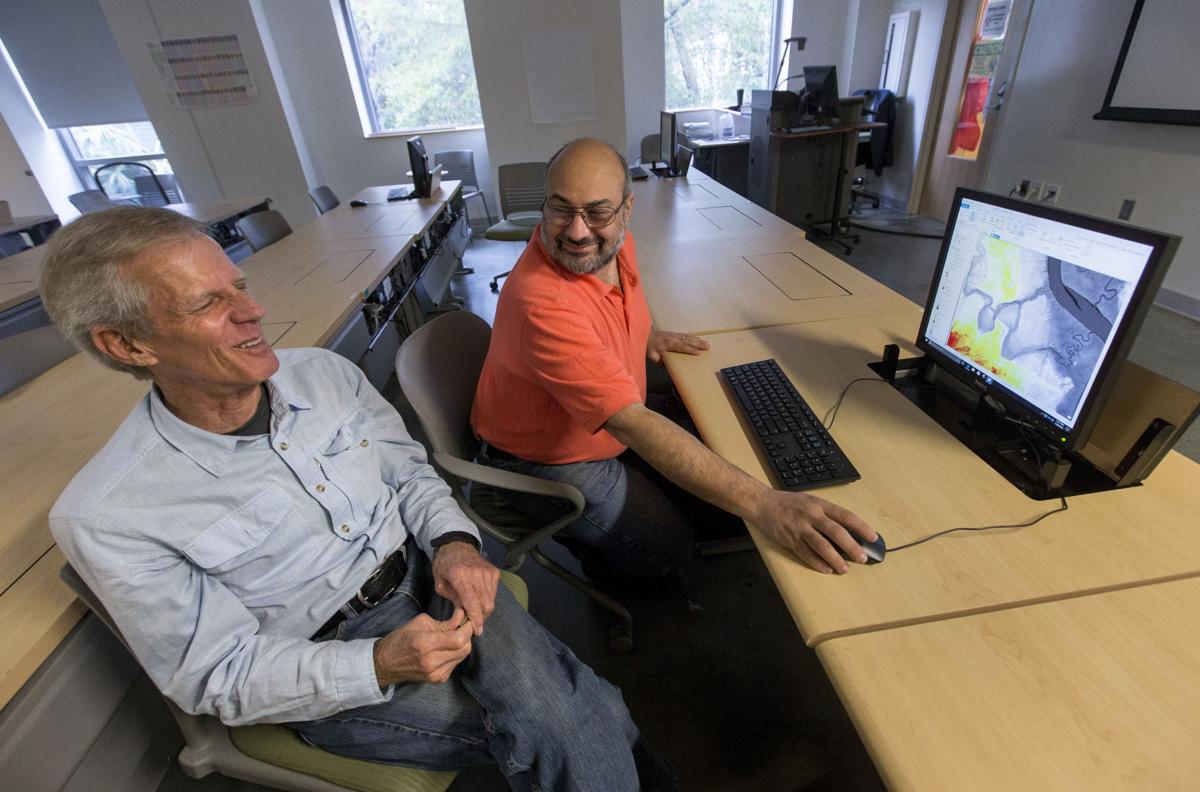 Phil Dustan, left, a marine biologist and Norm Levine, a geologist both at the College of Charleston look at aerial maps on a computer screen showing elevation changes on Johns Island Monday, January 29, 2018 at the College of Charleston Geology Department. More than half of South Carolina’s shoreline is eroding a mix of natural forces along with human development. Andrew J. Whitaker/ Staff 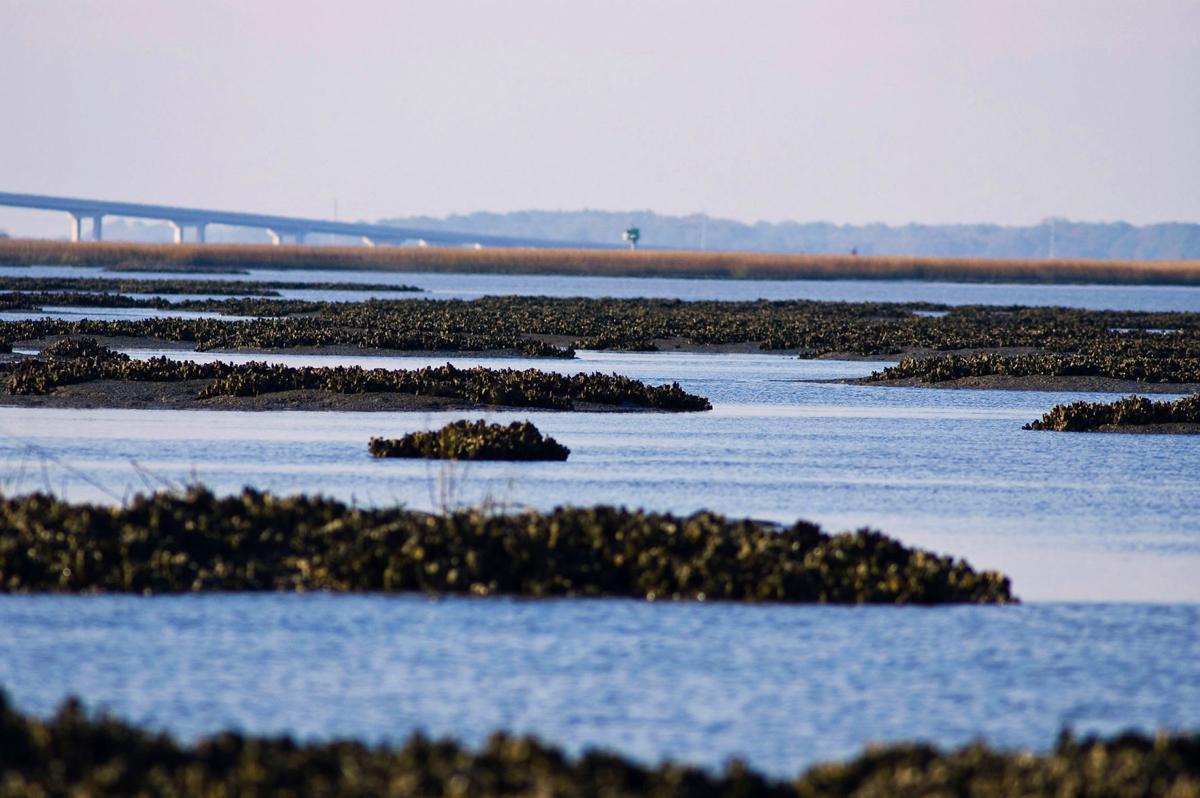 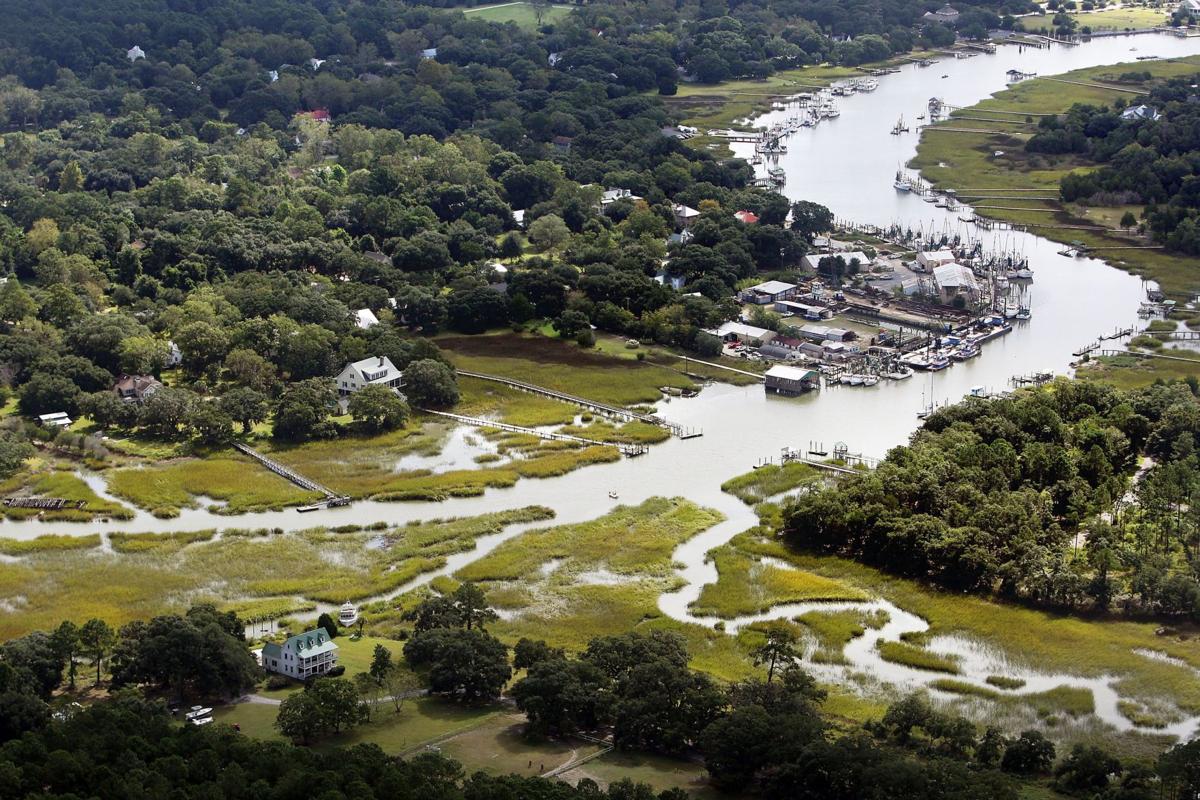 Silver Hill plantation house (lower left) on the marsh along Jeremy Creek in McClellanville in September.

In South Carolina, tides flow deep inland through twists and turns of creeks, beaches and salt marsh, a shoreline that from above looks more like plant roots than a straight edge.

Now, for the first time, geologists have measured these curves and bends and come up with a stunning number: Straighten everything out, and you could draw a line 8,763 miles long, from Charleston to India.

And geologists discovered something else: More than half of South Carolina’s shoreline is eroding under an onslaught of rising seas, pounding storms and other scouring forces.

These and other recent findings cast new light on the nature and fate of our coast.

While South Carolina’s photogenic front beaches get lots of attention and visitors, a bigger story about the state’s coastline is behind them amid the pluff mud and hermit crabs.

It’s a story of loss on an incremental but massive scale, a trend that’s accelerating — a situation that poses increasingly urgent questions to government planners, insurers and property owners: Amid relentlessly rising seas and a coastal population boom, do you harden these fragile edges so they don’t vanish?

Or, do you let nature take its course?

South Carolina’s coast may lack the vertical grandeur of California’s coastal cliffs, but here the moon, wind and water have created a massive circulatory system. Twice a day, tides pump huge volumes of water across spongy flats like a slow-beating heart.

“It’s so dang complicated, especially south of Charleston,” Chester Jackson, a coastal geologist from Georgia Southern University, said of this intricate shoreline. “When you get inside the ACE Basin, there are an insane amount of nuances in the tidal creeks.”

It would take an army of surveyors to tromp through the muck and Spartina grass to trace these capillaries. And, a few years ago, Jackson wondered whether there was a better way. He was at his computer one day thinking about algorithms when the light went on. He punched in some programming and ran scenarios.

Suddenly, he had the beginnings of a program that could map moving boundaries over time. “What would have taken years to do in the field, you can run in a day,” he said. “I kept pressing the buttons to refresh to make sure it was real.”

He named the program AMBUR, short for “analyzing moving boundaries using R.” (R is a programming language.) The Department of Health and Environmental Control eventually hired him to study South Carolina’s coast.

He and his colleagues mapped beaches and inlets. They pinpointed docks and culverts and seawalls. Done in three phases, it would become what Jackson says is the most exacting analysis ever done for a large coastline.

Published in December, the results were revealing.

More than 4,600 miles of this soppy and intricate shoreline has been losing ground in recent decades. Other areas were stable. A few stretches gained ground.

On average, eroding areas had lost between a foot and a foot-and-a-half every year to the sea. Erosion was particularly severe in sounds, harbors and inlets that were exposed to the sea, such as those formed by the Beaufort, Coosaw, Broad and Combahee rivers south of Charleston. Nearly 80 percent of rivers had eroded over the long term.

Some river banks lost on average about 3 feet a year. Jackson called these hotspots “alarming.”

The study also revealed the many ways people manipulate the shape of this shoreline: We've armored it with boulder-strewn breakwaters, built culverts, causeways, seawalls, bulkheads; we've built roads, bridges, gangways and floating docks. All told, researchers found almost 18,000 major structures on our shoreline. More than 1,400 are threatened by erosive forces.

The results, Jackson said, were a wake-up call: In our love for land by the water, we’ve built in places with inherently unstable boundaries.

It’s about the pace

James Morris is a salt marsh mechanic who knows how these edges work. He’s a professor of civil and environmental engineering at the University of South Carolina — the first to document how Spartina capture sediment as tides come and go. This creates a balance, he said. It allows marsh grasses to rise in tandem with a rising sea.

This harmony happens as long as seas rise and fall slowly, as they have for tens of thousands of years. But climate change has ratcheted up the pace of sea rise, as if normal geologic time was switched on fast-forward.

Morris recently examined data captured by a federal sea level gauge in Charleston Harbor. It’s one of the oldest continuous sea level measuring stations in the nation. He calculated that over the past century, the sea level in Charleston rose on average at a rate of about one-tenth of an inch a year.

But in recent years, it has been rising at a rate of .15 inch a year. This may not seem like much but in geologic terms, it's a dramatic acceleration — a 50 percent increase. Like an interest-bearing bank account, this adds up over time. It creates a cascade effect in our marshes; their edges fray; tidal currents eat into the banks of creeks and inlets; the creeks dilate; and more water courses through, creating even more erosion.

This is happening now, Morris said. Some measuring stations that have tracked heights of marshes at the Belle W. Baruch Institute north of Georgetown have been lost. “They used to be well into the marsh," he said. "Now, they’re in the water.”

The past under water

Storm surges and seasonal high tides blur these edges even more. When the moon’s pull is particularly strong, gravity pushes the Atlantic farther into our marshlands. Some days, these high tides spill onto what normally is dry land. During the 1960s, Charleston saw a handful of nuisance tidal floods. In 2016, the city saw more than 50.

Stronger currents eat into the banks of the Ashley River on James Island, washing away some of its history. The first shots of the Civil War were fired from earthworks at Fort Johnson. That spot now sits about 50 yards into the harbor.

Meantime, scouring forces have marched into a forest, felling trees and leaving behind a boneyard beach similar to what you find on Hunting Island other fast-eroding front beaches.

Phil Dustan, a marine biologist at the College of Charleston, has taken students to this area of Fort Johnson since the early 1990s. Dustan remembers seeing a saltmarsh on the beach years ago.

In his mind, this loss is one of many examples of how climate change is accelerating. His academic specialty is coral reefs, and he’s seen rapid changes in reefs across the world — changes hidden under the waves. It's an underwater catastrophe. But the loss at Fort Johnson isn't hidden, he said.

Also in plain view are undeveloped properties next to marshlands — low-lying places that he believes should remain in their natural states.

Aerial photos of Fort Johnson show how its banks have eroded dramatically since 1989. The first shots of the Civil War were fired in an area that is now under water.

One recent afternoon, Dustan and Norman Levine, a College of Charleston geologist, examined aerial maps so detailed they could pinpoint elevation changes as slight as the width of an average person’s hand.

Levine used color shades to show changes on Johns Island, which revealed an ancient story: Thousands of years ago, the sea level was higher and created sand dunes across what today is Johns Island. They ran parallel together like corduroy.

Levine pressed some keys and today’s development — roads, stores and homes — appeared. Much of this was clustered on the dune ridges. “This shows how people built on the ridges and farmed in the swales,” Dustan said. “Now, developers want to build in these low points.” Including some 300 homes near his house on Johns Island, hence his interest in the maps. Levine pressed more keys that showed what sea rise would do to the area: A 9½-foot tide similar to Hurricane Matthew’s surge puts a sizable portion of the tract under water.

By 2100, average sea levels are expected to rise at least 1.6 to 3.3 feet. This will further change the edges of our shoreline, threatening homes and buildings in the way. Zillow recently took its database of 110 million homes and studied how they would fare with 6 feet of sea rise.

What happens next is as clear as pluff mud. Will cities protect their land? Will developers forgo profits by forgoing construction on low-lying land? Cities such as Charleston have long lacked a sense of urgency about sea rise — even in the face of constant flooding.

Yet, in January, Mayor John Tecklenburg said in his State of the City address that flooding and drainage are now the city’s top priority. The city will hire a floodplain manager to take harder looks at new development in flood-prone areas. Plans call for a higher seawall along the South Battery, massive new underground pumps to drain basins south of the city's medical complex, projects with price tags that have yet to be set but will be measured in the hundreds of millions of dollars.

Meantime, the forces of wind and water — moving more quickly now than in recent decades — keep pumping water through our 8,763-mile-long shoreline, a complex coast that has long defied our plans to control it.