COLUMBIA — Just days after The Post and Courier sued for an incident report of a high-profile double homicide in Colleton County, the State Law Enforcement Division released 18 pages of supplemental reports in the case — including eight pages almost entirely redacted.

The Post and Courier filed a lawsuit against the Colleton County Sheriff’s Office and SLED on June 17 in 14th Circuit Common Pleas Court in Walterboro, accusing the two agencies of violating the S.C. Freedom of Information Act in the double-homicide case of Paul and Maggie Murdaugh.

The paper's reporters were denied access to public records generated by deputies investigating the June 7 slayings of Paul Murdaugh, 22, and his mother, Maggie, 52, at the family’s home in Islandton. Reporters had made several attempts to obtain these incident reports produced by SLED and the Colleton County Sheriff’s Office.

“We have received and are currently processing a significant number of FOIA requests for documents related to this case,” SLED spokesperson Tommy Crosby wrote on June 21. “In the interest of transparency, SLED is releasing redacted copies of the supplemental incident reports recently received from the Colleton County Sheriff’s Office.”

Maggie and Paul Murdaugh were found fatally shot shortly after 10 p.m. at the family’s property at 4147 Moselle Road in Islandton. Attorney Alex Murdaugh discovered the bodies of his wife and son that evening.

The supplemental reports redacted where their bodies were found and information about the number of shell casings at the crime scene. It is unclear why this information was redacted. Other lines were completely blacked out, leaving no clues as to what information was being kept from the public.

“It’s up to the judge to decide whether SLED and the Sheriff’s Office have been too heavy-handed in blacking out portions of the reports,” attorney Edward Fenno, who represents The Post and Courier on this case, said. “We have requested a hearing on the subject as soon as possible.”

Mitch Pugh, the paper's executive editor, agreed. “A lawsuit shouldn’t be required for members of the public to gain access to what is clearly public record,” he said. “But we are glad to see that SLED now recognizes its obligations under South Carolina FOIA law, and we look forward to the agency’s continued commitment to transparency.”

At least 11 officers from the Sheriff’s Office were at the crime scene in Islandton the night of the slayings, according to the supplemental reports.

The original two-sentence incident report provided to The Post and Courier reporters read: “On June 7, 2021, at approximately 2226 hours I, [name redacted], responded to 4147 Moselle Rd in Colleton County in reference to two gunshot victims found by the caller. See supplement for details.” 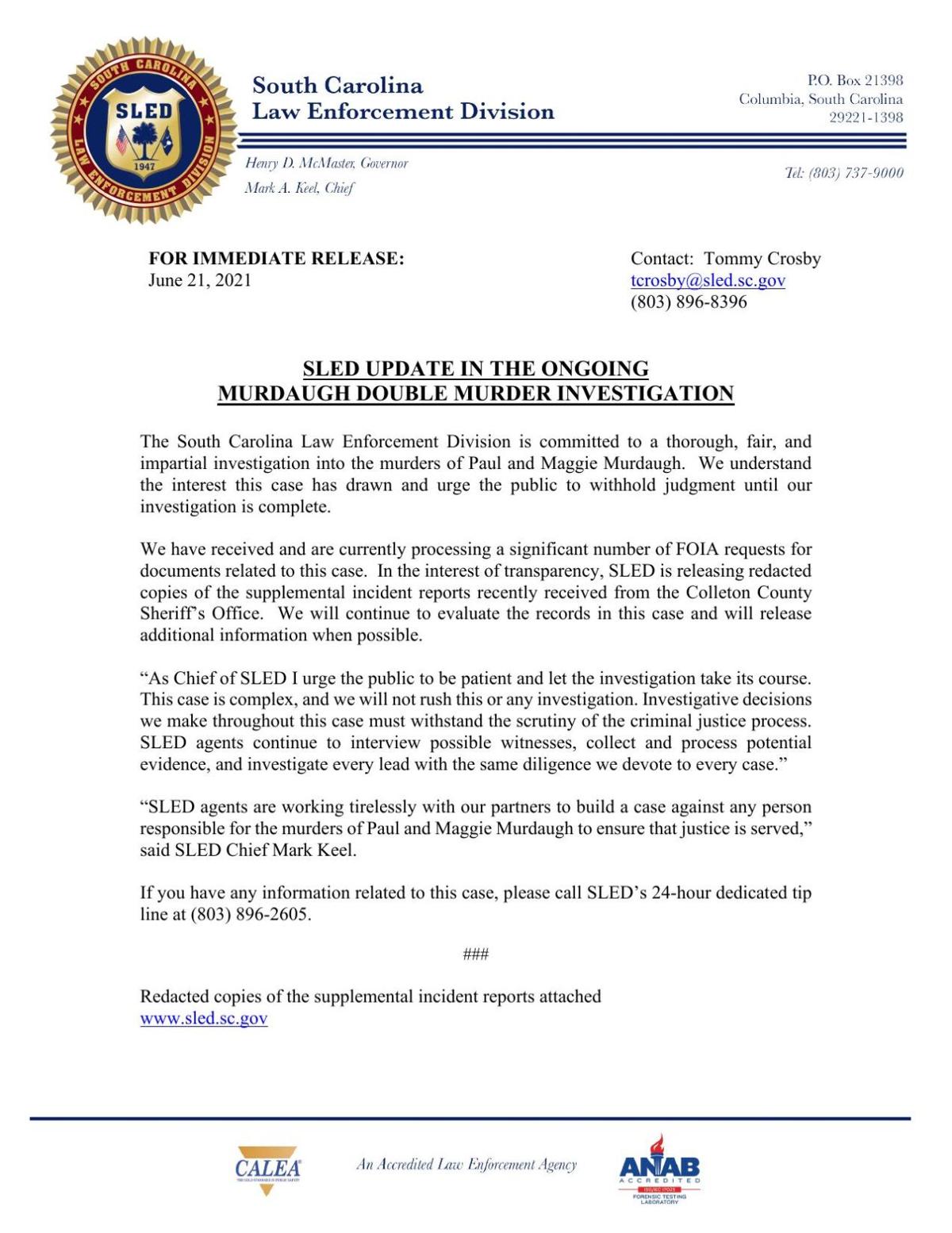 The second page of the supplemental reports released by SLED was this same report. It had some redactions, but this version of the incident report included that the victims were identified as Paul and Maggie Murdaugh. It also included that the officer who wrote the report, Sgt. Daniel Greene, called the Sheriff’s Office for backup. Investigators were responding and the scene was secure, according to the report.

It is unclear why this information was originally redacted.

The Murdaughs are a prominent family in South Carolina and are known to be a legal dynasty. Three generations of Murdaughs have served as 14th Circuit solicitor covering the state’s southern tip. Alex Murdaugh also works part time for the 14th Circuit Solicitor’s Office.

“I see words like ‘dynasty’ used and ‘power,’” Randy Murdaugh, Alex Murdaugh’s brother, said in an interview with ABC’s “Good Morning America” last week. “And I don’t know exactly how people use those words, but we’re just regular people. And we’re hurting just like they would be hurting if this had happened to them.”

Also on June 21, the 14th Circuit Solicitor’s Office said it would refrain from commenting on the Murdaugh double homicide so it does not interfere with SLED’s investigation, Solicitor Duffie Stone wrote in a statement.

It is unclear who will be the prosecutor for the case because no suspects have been disclosed.

“To my knowledge, there is no clear suspect in this case at this time,” Stone wrote. “As such, speculation about the propriety of my office’s involvement is precisely that — speculation.”

Stone said if a conflict of interest in the case arises, he would take appropriate action.

Olivia Diaz covers breaking news and public safety in the Charleston area. She spent the past four years in Richmond, Virginia, studying journalism and global affairs at the University of Richmond.