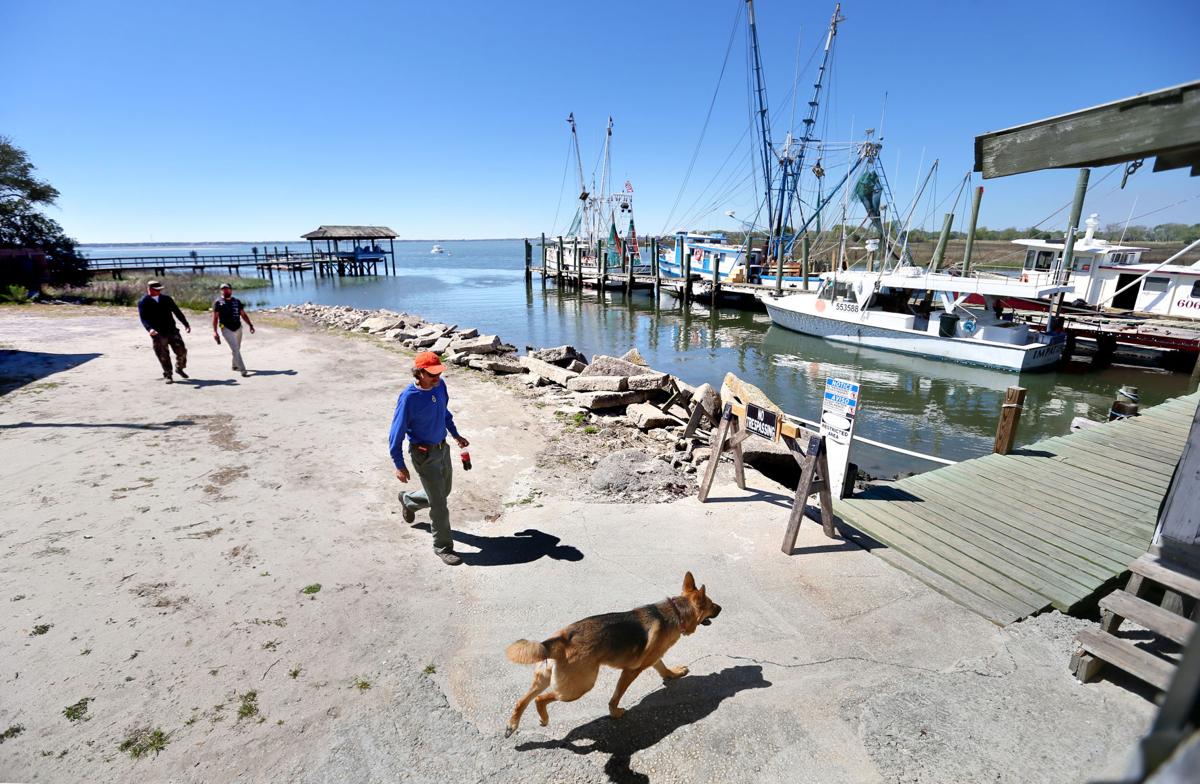 Fishing boats and shrimp trawlers are tied up at the Wando dock, one of the last on Shem Creek, on Friday, March 22, 2019. File/Staff 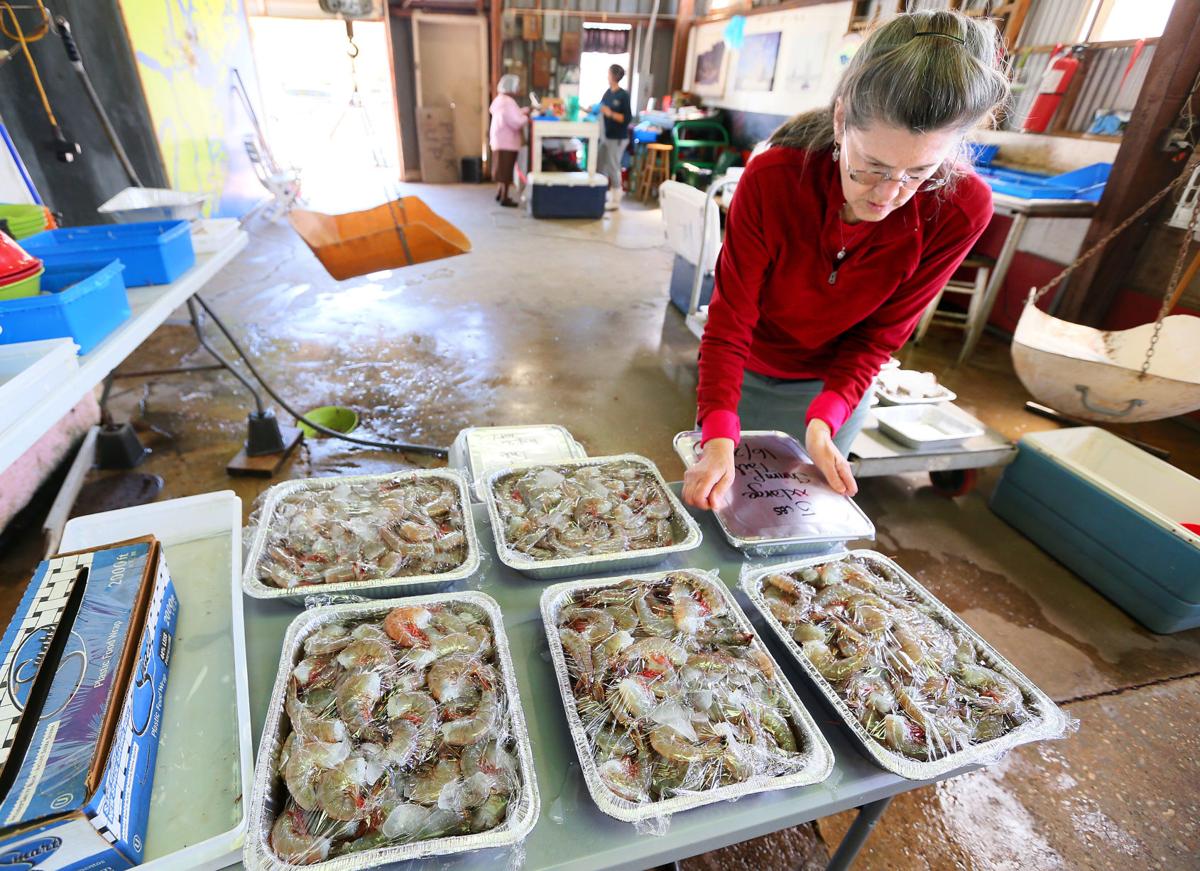 Working from the Wando Dock on Shem Creek, Cindy Tarvin makes labels for 5-pound trays of shrimp — caught by Tarvin Seafood's Carolina Breeze — for freezing on Friday, March 22, 2019, before their final trip to local restaurants. File/Staff

The historic Wando Seafood shrimping dock is up for lease on Mount Pleasant's landmark Shem Creek — aggravating shrimpers who fear they will lose one of the last places to tie up the fleet.

The town opened the bidding process recently with a public notice but without notifying concerned parties directly, including Tarvin Seafood, which has operated the dock and a seafood business there for eight years.

Co-owner Cindy Tarvin said she learned about the lease notice on social media.

The Tarvins plan to submit a bid. Asked what they would do if they lost the lease, she answered, "That's a good question. I guess we'd cross that bridge when we came to it."

When the leasing notice was referenced on the local Save Shem Creek group web page, former Mayor Linda Page commented, "It's a shame the Town didn't contact any of the (shrimping) fleet to see if they were interested or at least let them know."

Mount Pleasant officials say there's little risk the fleet will lose one of the last shrimping docks on the creek where visitors come looking for the boats and where shrimpers in earlier days tied off three abreast to sell their catch from the docks.

"Town Council voted for the town to purchase it to save it from development and to see it continue as a viable commercial shrimp dock," Mayor Will Haynie said. "It is not a park, nor a nonprofit."

Town Administrator Eric DeMoura said the bid opening was part of a plan made public from the beginning. That strategy was to first do safety repairs to the three buildings and the dock, then open up the site for bids to assure a public process and protect the town's liability.

The spot is known as the Wando Seafood Dock because of the longtime business the Tarvins took over, and conversationally called the Wando dock.

Structural beams have now been supported and the electrical system repaired. A crane and barge sit at the Wando dock now, to assist shoring up the pilings.

The successful bidder to manage the site will have to prove it has insurance, has management experience and a stack of state health and safety certifications required to run a dockside seafood business, DeMoura said.

It also will have to submit pricing plans that don't undercut other businesses along the creek, DeMoura said.

The Nov. 25 deadline for the bid proposals can be extended, he said.

The town eventually will contract a design team and look to the public for input on how to develop the two adjacent buildings, as well as the rest of the 1-acre property, DeMoura said. But that's long term and no funds have been set aside for it yet.

When the Wando Seafood Dock went up for sale in 2018, the potential loss of one of the last shrimp docks on picturesque Shem Creek was a problem for Mount Pleasant. Wando Seafood had been in business since 1949 and the creek itself has been a shrimp boat hub since the 1930s.

Shem Creek is a popular recreation and tourism attraction for the town. The hanging shrimp nets are what tourists and diners come to see.

The creek, though, has become a mix of upscale residences, waterfront restaurants and water-sports businesses, edging out the shrimp boats — all of it making big contributions to the town's economy.

Commercial fishing docks, however, are disappearing across the state because of development pressures on the lucrative waterfront properties.

The town bought the Wando dock for $4.35 million in January with that in mind, amid community pressure to save it and fully knowing about $400,000 in repairs were needed to keep it afloat. Town officials said at the time they could still sell it for development if they can't transform the site into a public-private commercial facility.

Are too many docks crowding South Carolina waterways?

A conditional lease with Tarvin Seafood was extended for one year, essentially to mid-January 2020, to keep a seafood business in operation while the town did the fix-up work.

But for the Tarvins, who took over the former Wando Seafood in 2011 with little experience shrimping, the town process is a tough transition. They now own two boats, including a long-distance freezer trawler that was working Thursday off Florida, as well as renting dock space. Much of the equipment at the dock they own.

"We have grown with the business," Cindy Tarvin said.

The shrimping business on the creek continues to struggle, she said, but progress has been made extending sales to restaurants and retail businesses.

Brett Elrod, 41, a lifelong Mount Pleasant resident, has stepped in to buy one of the last shrimp boat docks on the town's picturesque tourism creek.

A good spring seemed to indicate Charleston area shrimpers would have a much needed bounty year. But the catch fell off severely this fall.