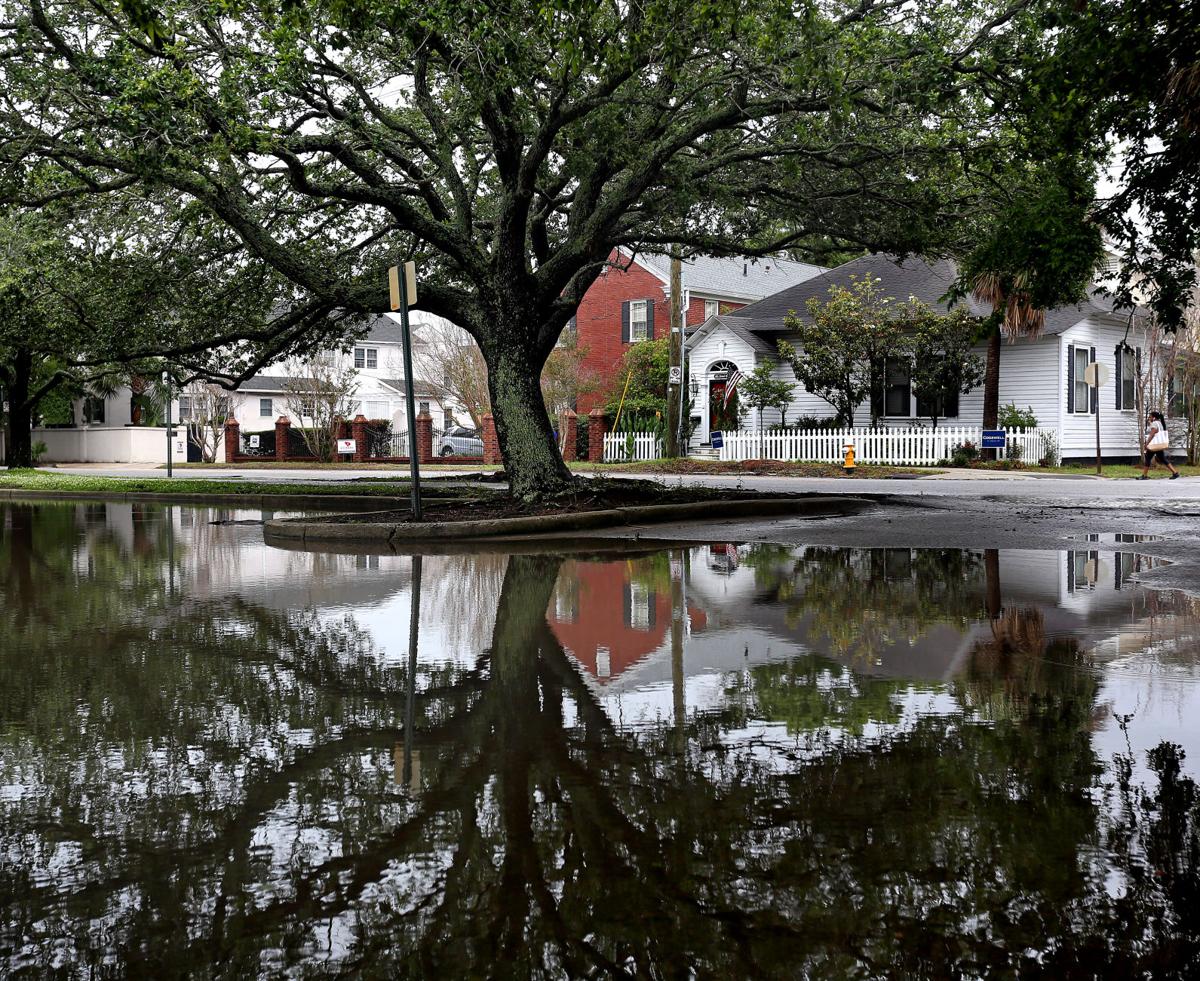 Rain from Subtropical storm Alberto and high tides flood the parking lot at Moultrie Playground on a stormy Memorial Day Monday. Charleston will see higher and more frequent floods in the near future, according to a new study. Grace Beahm Alford/Staff/File 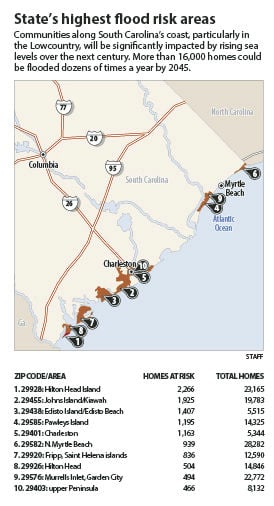 Rain from Subtropical storm Alberto and high tides flood the parking lot at Moultrie Playground on a stormy Memorial Day Monday. Charleston will see higher and more frequent floods in the near future, according to a new study. Grace Beahm Alford/Staff/File

Within the next three decades, nearly 8,000 homes in Charleston County could flood at least 26 times a year if the sea level rises by 2 feet, considered by climate experts to be a worst-case scenario.

That's according to an analysis of data released today by the Union of Concerned Scientists in a study that estimates how many properties will regularly flood along the coasts over the next century, given a range of predictions.

While this sort of study is published often, this one is unique in that it shows what could happen in the near future to the property values and overall tax bases in frequently flooded coastal communities.

The researchers used property data from online real estate company Zillow to give a highly localized picture — by ZIP code — of the number of homes, residents and property taxes at risk.

Kristina Dahl, senior climate scientist with the nonprofit that conducted the study, said many people envision sea level rise as a distant problem, a lifetime away.

"We wanted to examine the near-term threat to properties and highlight the fact that, long before these properties are underwater at every high tide, homeowners and business owners could be experiencing such frequent disruptive flooding that they can’t continue business as usual," Dahl said.

Two South Carolina ZIP codes — 29928 on Hilton Head Island and the only one on Johns Island, 29455 — rank in the top 50 nationally for the highest number of homes that will routinely flood by 2045, using the highest prediction of 6.6 feet of sea level rise at the end of the century.

Within 30 years, Hilton Head could see 2,266 chronically flooded homes — defined by researchers as 26 floods a year — while 1,925 homes on Johns, Kiawah and Seabrook islands could have the same problem. That's roughly 10 percent of each area's housing stock.

Leigh Brandenburg has lived in the Stono Pointe community along the Stono River on Johns Island for 20 years. She said sea level rise does feel like an imminent threat because the tidal floods from recent storms such as Irma seemed worse than those she'd seen in the past.

"Just based on the storm surges we’re seeing now, I can’t imagine what it’s going to be like in 2045," she said. "We tease about it all the time in our neighborhood, like, ‘Luckily, we have boats, if worst came to worst.' ... But we’re half-joking and half-serious."

What the numbers say

The research shows that South Carolina ranks fifth in the nation for most homes at risk in 2045 and by the end of the century.

The study estimates that more than 16,000 of homes, mostly in the Lowcountry, will flood dozens of times a year by 2045. That would displace the roughly 24,000 people living there today, sink property values and possibly lead to large-scale problems for the housing market and the tourism economy.

The Post and Courier's analysis shows a majority of the highest-risk places in the state are in Charleston County, representing nearly half of the 55 state ZIP codes on the study's list. The others are in Horry, Beaufort and Georgetown counties.

After Hilton Head and Johns Island, here are some of the communities that will see the largest number of chronically flooded properties if the sea level rises by 2 feet:

While people living in Florida and New Jersey are likely to be hit hardest by rising seas, more at-risk properties are concentrated in the Lowcountry than most other places in the Southeast.

Repeatedly flooded homes are expensive to keep repairing and often impossible to live in. But many homeowners have a hard time escaping them. They quickly lose their market value and can eventually become unsellable, especially considering how expensive flood insurance would be for a frequently flood-damaged home.

Elizabeth Boineau's beloved home of 20 years in Charleston's lower peninsula is now her biggest burden. The house at 128 Beaufain St. was inundated with 8 inches of water during Tropical Storm Irma in September, the third time it had flooded in three years.

The city's Board of Architectural Review gave her permission to demolish it earlier this year — the first time the board had ever done so in the Historic District — but she's holding out to see if she can sell it as-is first. So far, she's had to drop the price four times.

"Emotionally, this has been an enormous drain," she said.

When it's all settled, she plans to get a condo on an upper level, and reluctantly, she'll probably look for places off of the flood-prone peninsula.

"It's a true dilemma," she said. "Our emotional attachment to this beautiful city that we love is strong. The very water that we wish to be beside ... is the very water that creates the treacherous aspects of life."

Neighborhoods with routine flooding problems could see overall property values decline, according to the report.

Brandenburg, a Realtor who works with many clients on Johns Island, said she understands how quickly that can happen.

"Once everyone gets wind of it, honestly, you would see a mass exodus I think," she said. "With my own property, selfishly, I don’t want to live in a zone where potentially my property value is going to plummet."

In more extreme cases in the future, the national researchers concluded that people who owe more on their mortgages than a repeatedly flood-damaged home is worth might just abandon it and let the bank foreclose on it.

But if the property has no value, the bank wouldn't be able to recoup its investment. If that happens on a large scale in one area, the consequences would reverberate throughout the local economy.

The 8,000 homes in Charleston County that could be routinely flooded in the future are worth $4.8 billion. If that sum depreciates, that puts a combined $39.4 million of property tax revenue in jeopardy.

That's more than a quarter of the county's budgeted property tax revenue this year.

Flood waters are a real threat to a tourism destination's viability. They can ruin vacation rental properties and shutter businesses, and after a while, flocks of tourists could dwindle.

That's a major concern for the tourism industry, an engine of the state's economy. Officials are already worried about it in the Grand Strand, especially since tourism dollars fund critical infrastructure.

David Schwerd, planning director for Horry County, said the county is soon going to start a study of flooding in the Garden City area. That low-lying region and nearby Murrells Inlet could see as many as 494 homes that are regularly flooded by 2045, according to the study. Parts of Garden City already flood regularly during severe rain.

"One of the challenges you have in an older commercial area on the ocean is they’re built at a lower level ... how do you address that in cases of flooding?" Schwerd said. "We don't know what the answer is. That’s what the study’s about."

Pawleys Island is not funded at all by property taxes, and relies almost entirely on accommodations taxes. Mayor Jimmy Braswell said they need more help to meet the challenges of rising water.

"We need federal, state, as well as county government, to try to help everyone with this whole flooding situation. It's going to do nothing but get worse," he said.

Hilton Head Island, a wealthy resort community in Beaufort County, is relying mostly on pumping systems around the island to defend against tidal floods. It also uses check valves to keep water from backing up into the drainage pipes.

Scott Liggett, the town's director of projects and facilities, said the officials there have been monitoring the sea level and haven't noticed any changes over the past few decades.

"The real question is, what's the most likely thing to occur, and what is it most practical and prudent to prepare the citizenry for?" he said.

Charleston Resiliency Director Mark Wilbert is in charge of mapping out strategies to prepare the city for rising seas. He said the city's updated Sea Level Rise Strategy will be based on a prediction of 1½ to 2½ feet of rise within the next 30 years, which is about the same measurement the latest study used.

In historic places like the peninsula, the strategy is to protect it from rising water. Large pumping stations are being installed at the edge of the Ashley River to fend off water, and the Low Battery seawall is being rebuilt along the southern edge.

Other areas such as West Ashley and Johns Island will call for different measures.

For instance, Wilbert recently met with developers on Johns Island to discuss building methods that go beyond what the Federal Emergency Management Agency recommends. That could involve building up higher, or directing new projects to higher ground.

"Do we have definitive plans yet for each of these unique areas? No, we don't. But I can honestly say we're meeting with people to work in those directions," he said.

That's probably the right direction, according to Dahl. She said FEMA maps, which establish the flood-prone zones where homes should be elevated, have long been problematic because they only account for past events, not future projections.

Climate scientists have been pushing FEMA to incorporate the predictions into the maps, but the effort hasn't materialized. In the meantime, using other sources of information, such as the National Oceanic and Atmospheric Administration, could help communities plan better.

"Ultimately, we need to understand the total risk picture of the places we’re developing," she said.

Chloe Johnson contributed to the report.