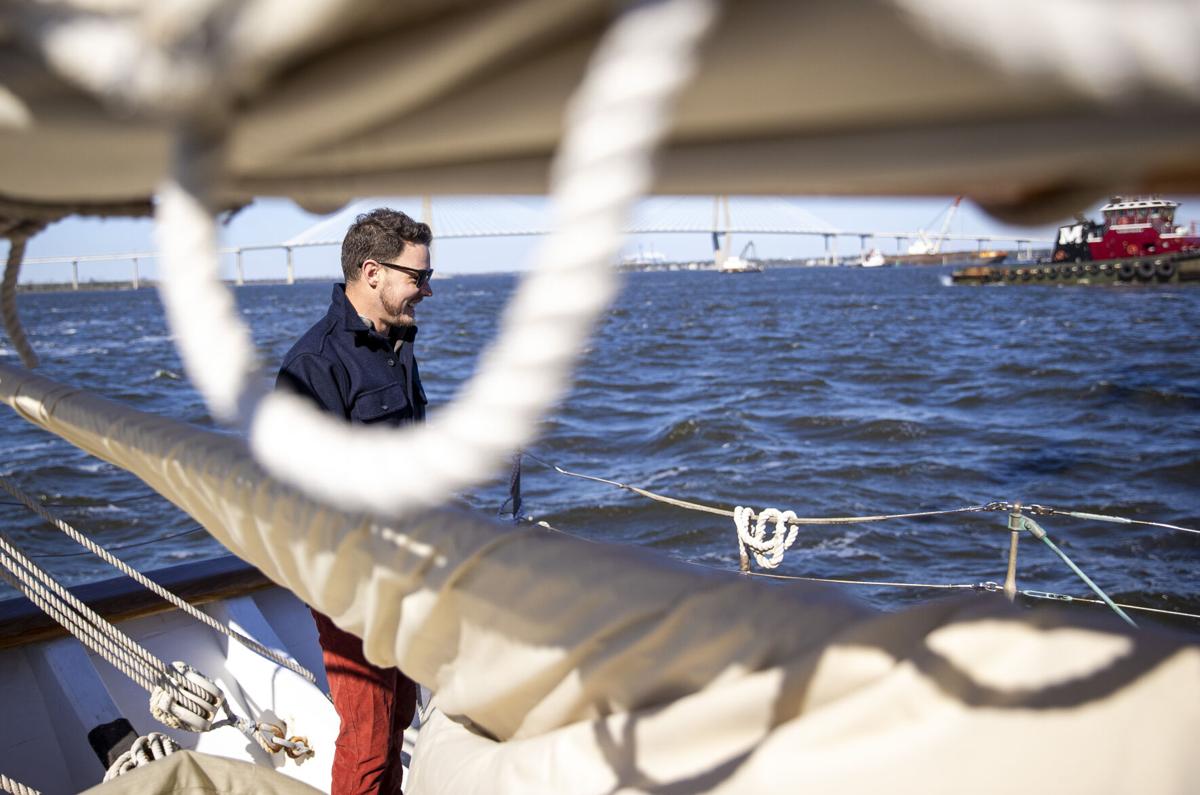 Charles Porzelt, acting captain of Spirit of South Carolina, puts up a wind blocker before a reception for crew of the Spirit and the Maine schooner Harvey Gamage on Sunday, Feb. 21, 2021, in Charleston. Andrew J. Whitaker/Staff 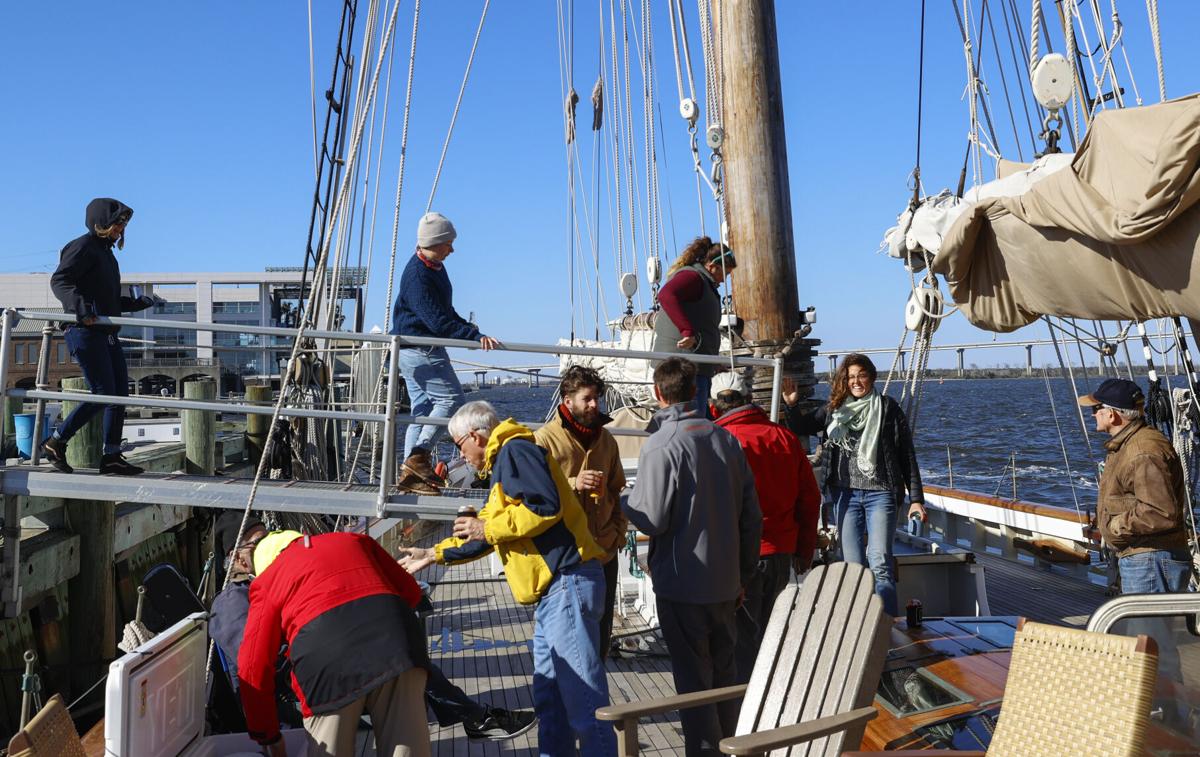 Crew of the Maine schooner Harvey Gamage walk aboard the Spirit of South Carolina for a reception on Sunday, Feb. 21, 2021, in Charleston. Andrew J. Whitaker/Staff 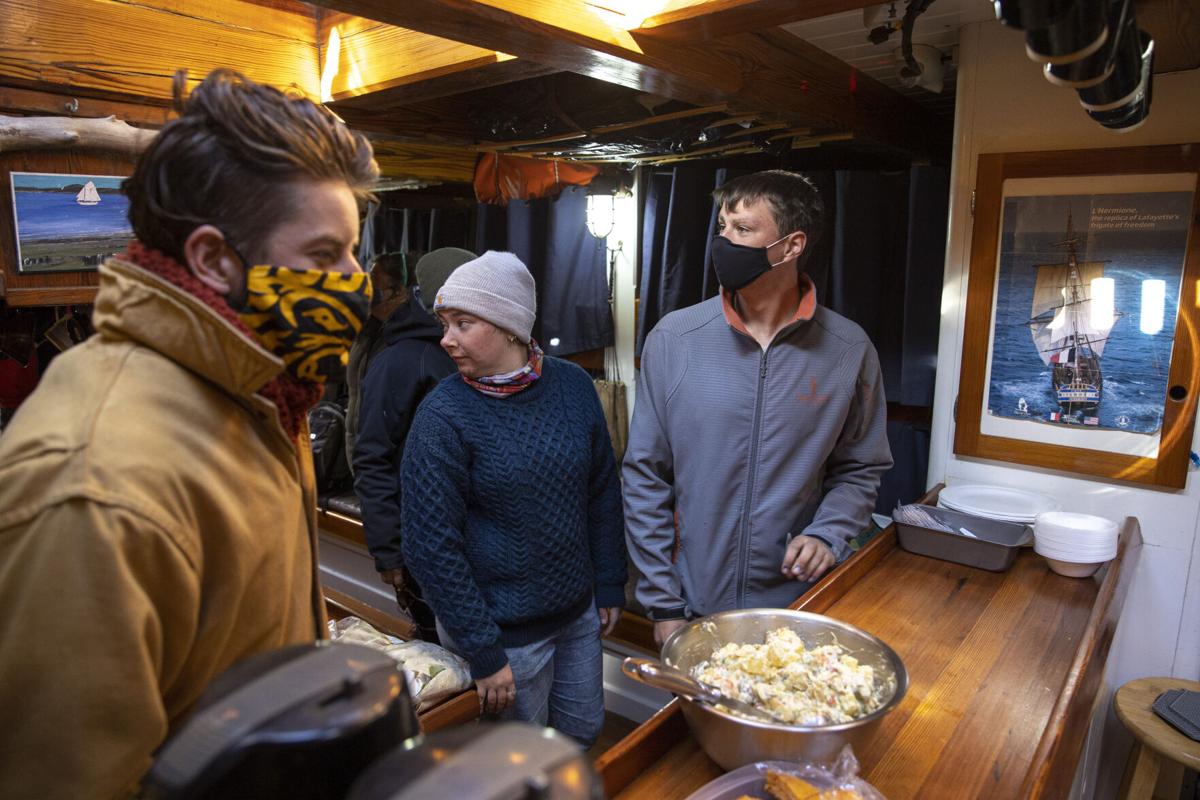 John Lawson (from left), Eva Keys and Asher Heaney of the Maine schooner Harvey Gamage tour the galley of the Spirit of South Carolina on Sunday, Feb. 21, 2021, in Charleston. Andrew J. Whitaker/Staff 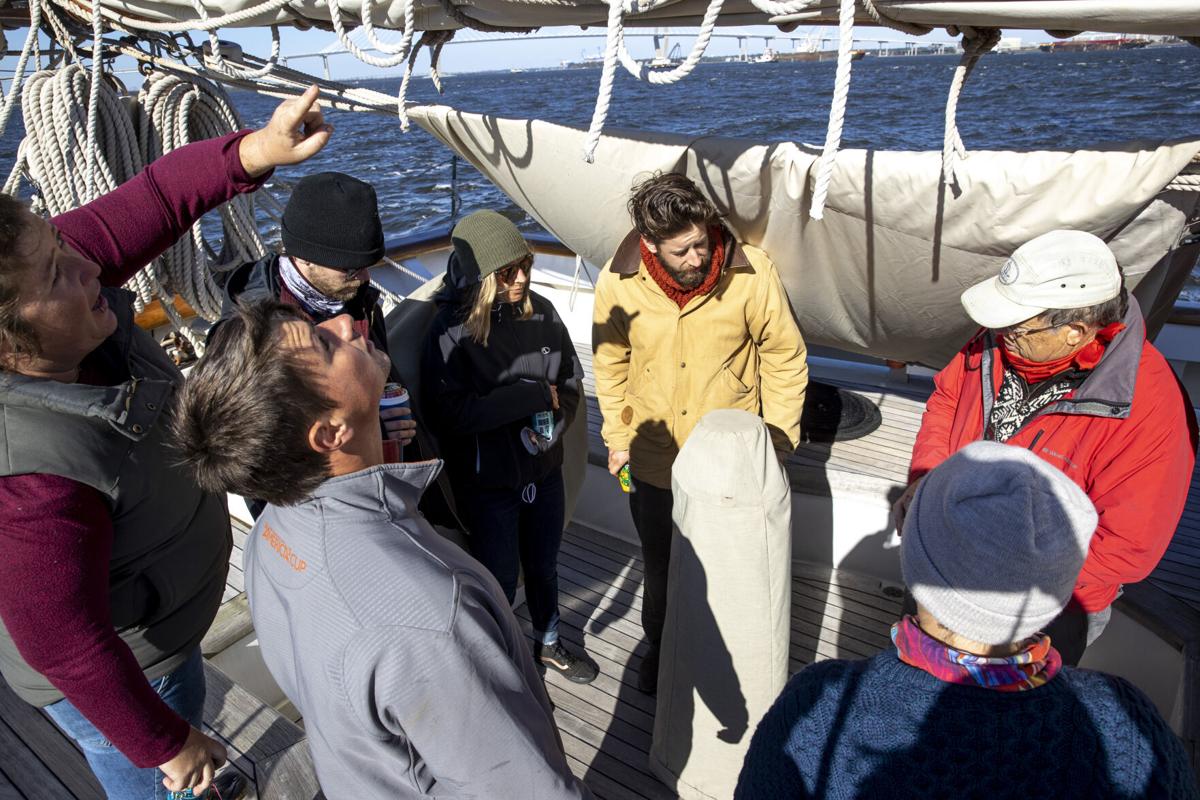 Bryan Oliver (far right) gives a tour of the Spirit of South Carolina to crew members from the Maine schooner Harvey Gamage on Sunday, Feb. 21, 2021, in Charleston. Andrew J. Whitaker/Staff 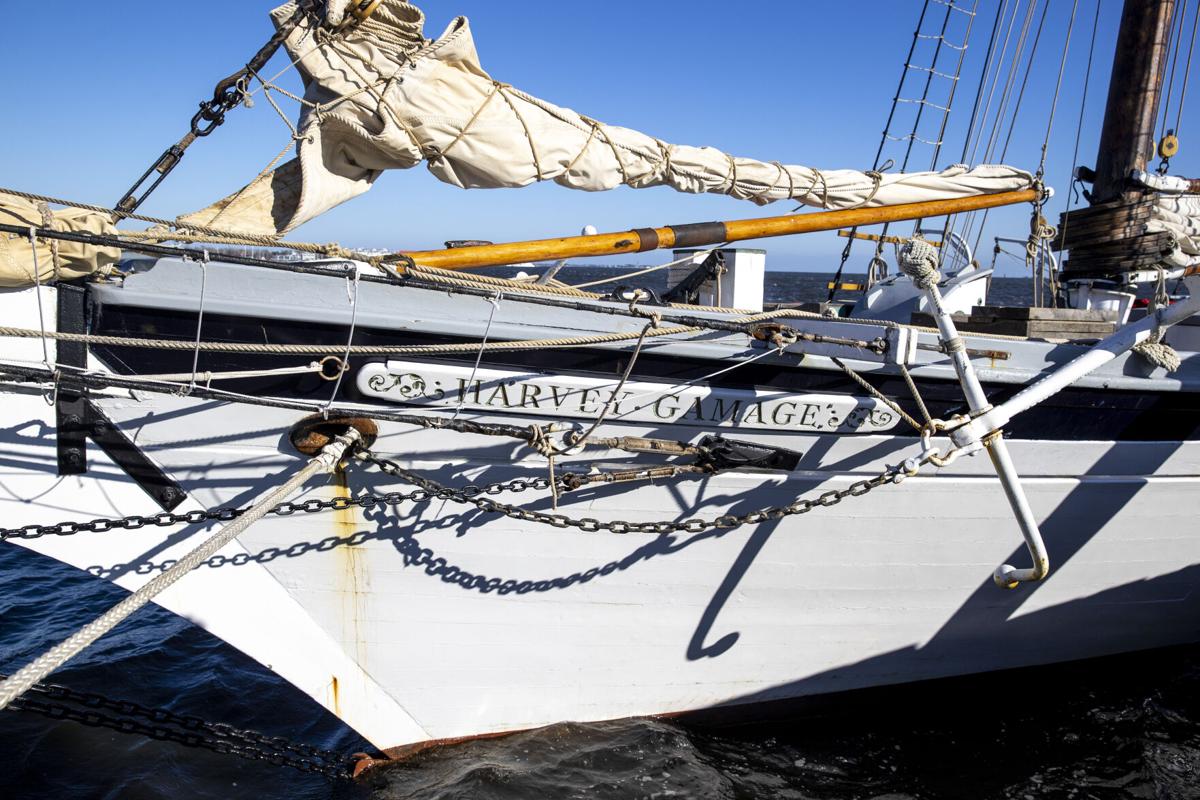 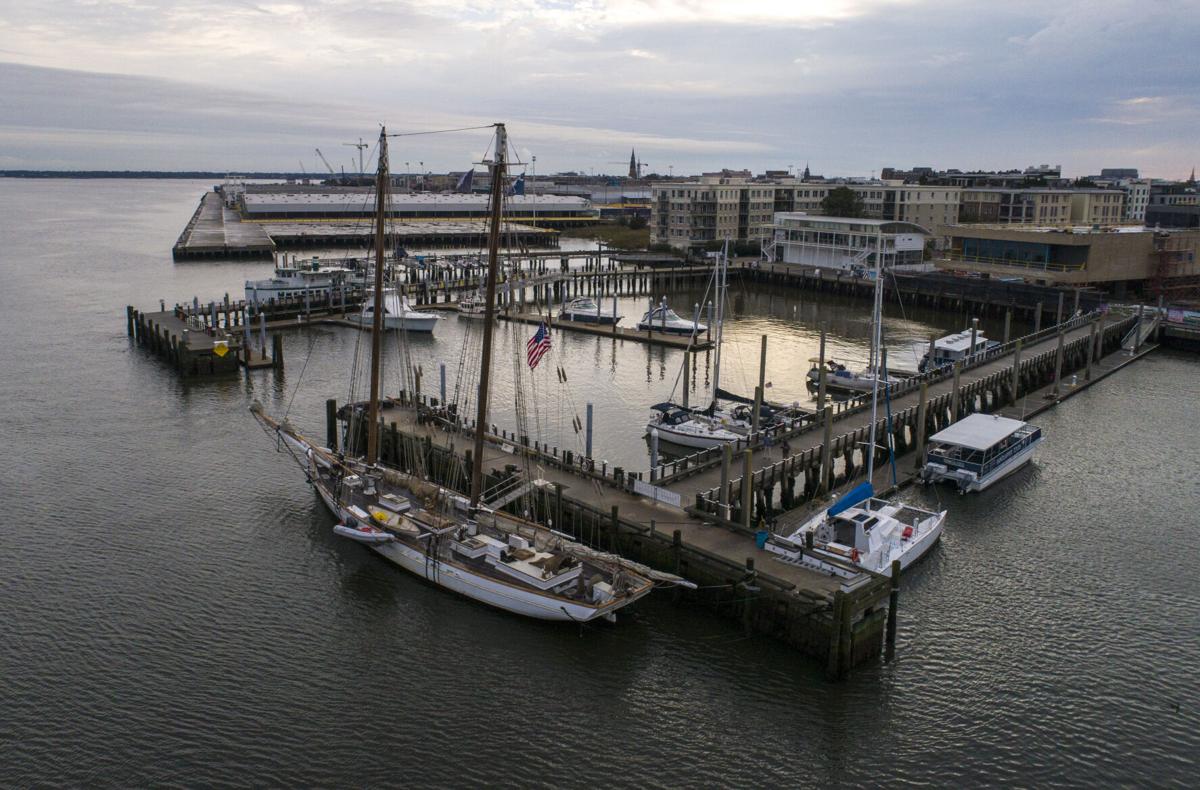 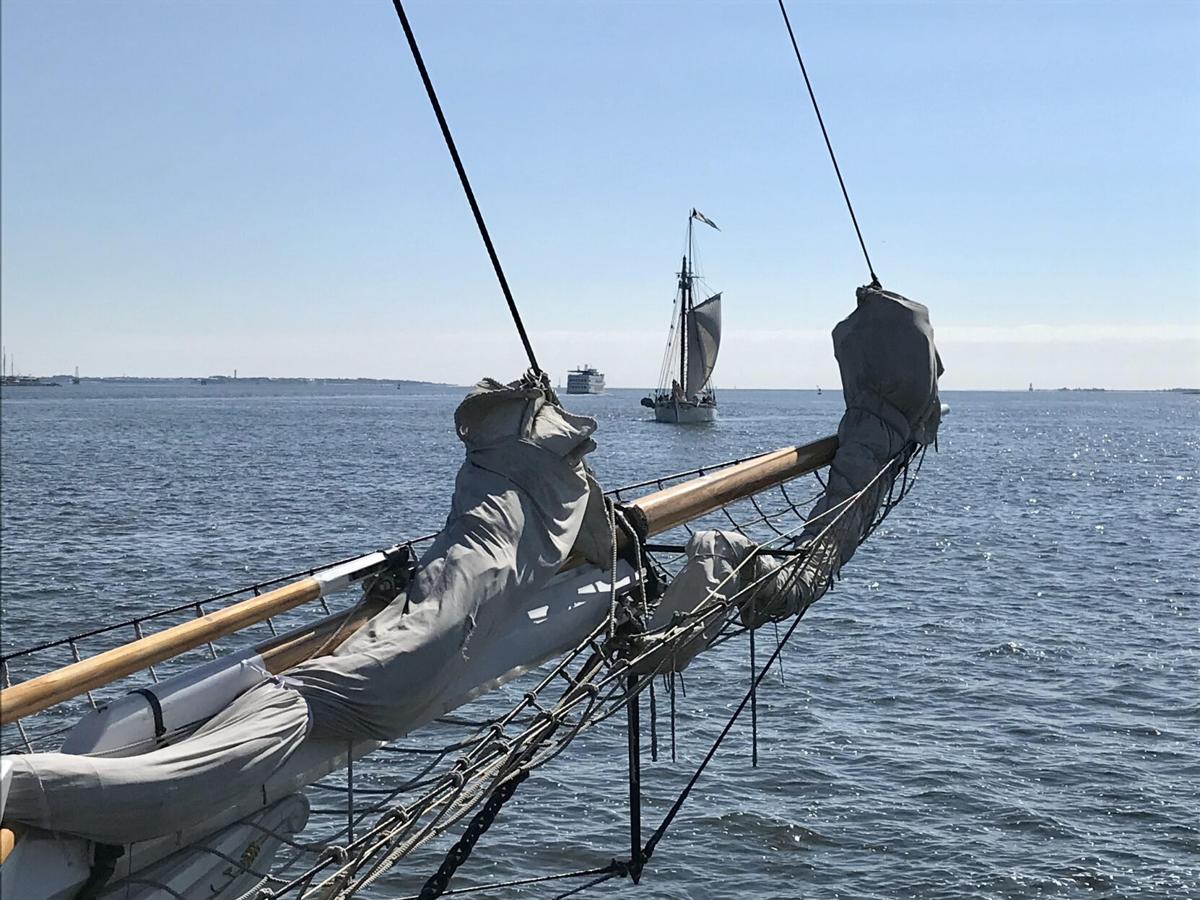 The schooner Harvey Gamage approaches the dock at the Maritime Center in Charleston, where the Spirit of South Carolina, seen in the foreground, is berthed. Adam Parker/Staff 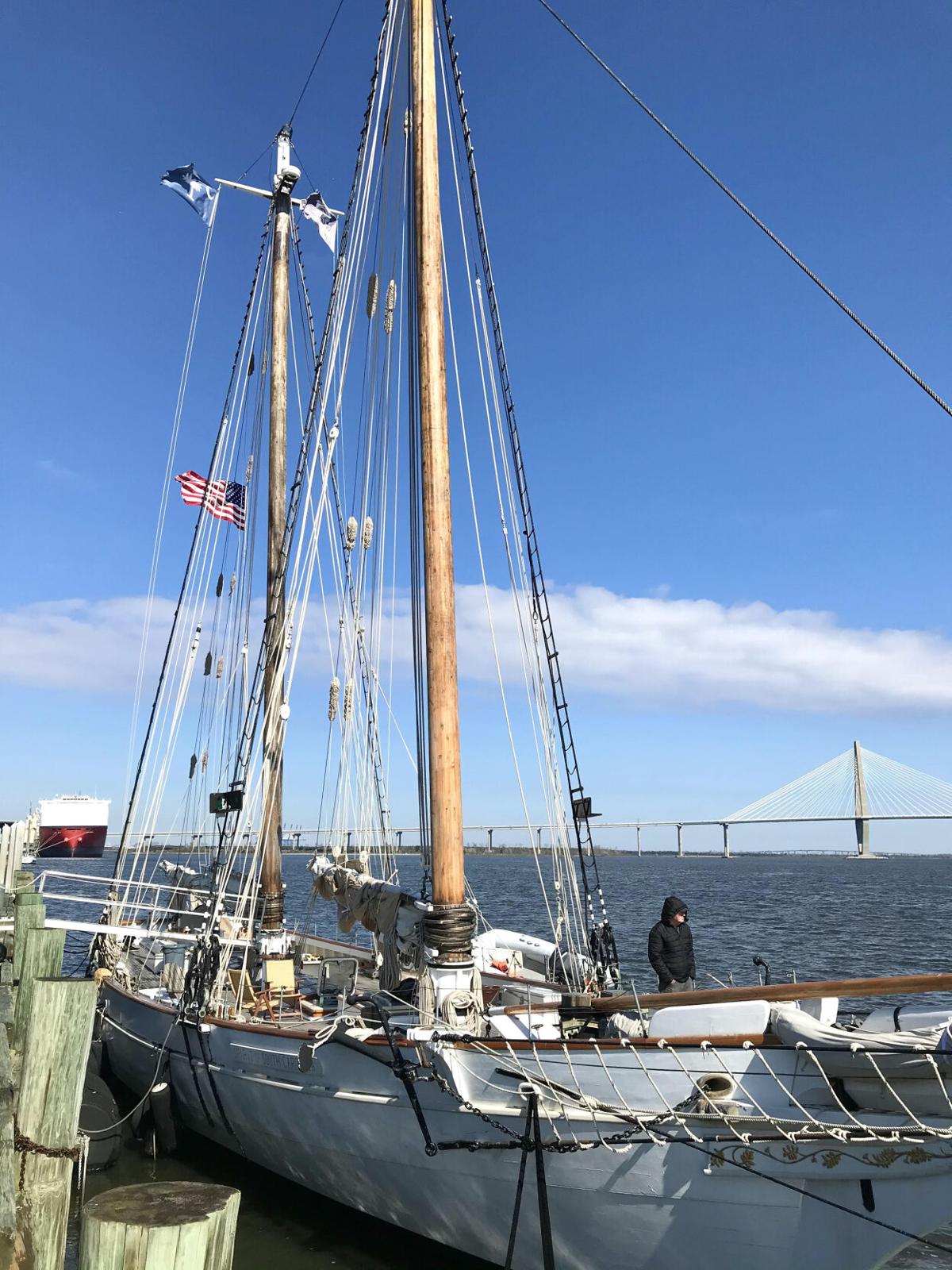 The Spirit of South Carolina is a replica of an 19th century schooner that plied the waters of Charleston Harbor and the nearby coast to guide large ships into port. Adam Parker/Staff 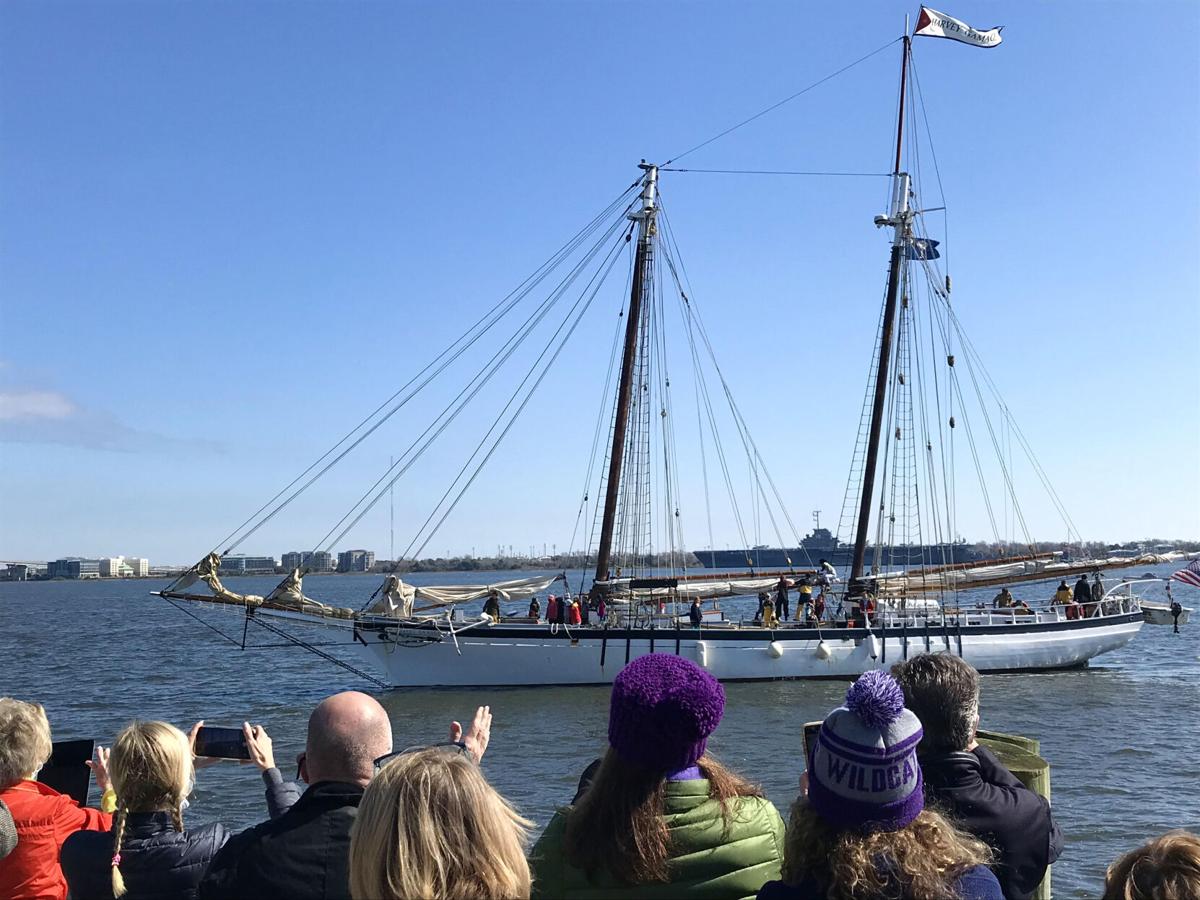 The Harvey Gamage sailed from Brunswick, Ga., to Charleston, arriving on Saturday, Feb. 20, 2021, with 15 Ashley Hall students on board. Adam Parker/Staff 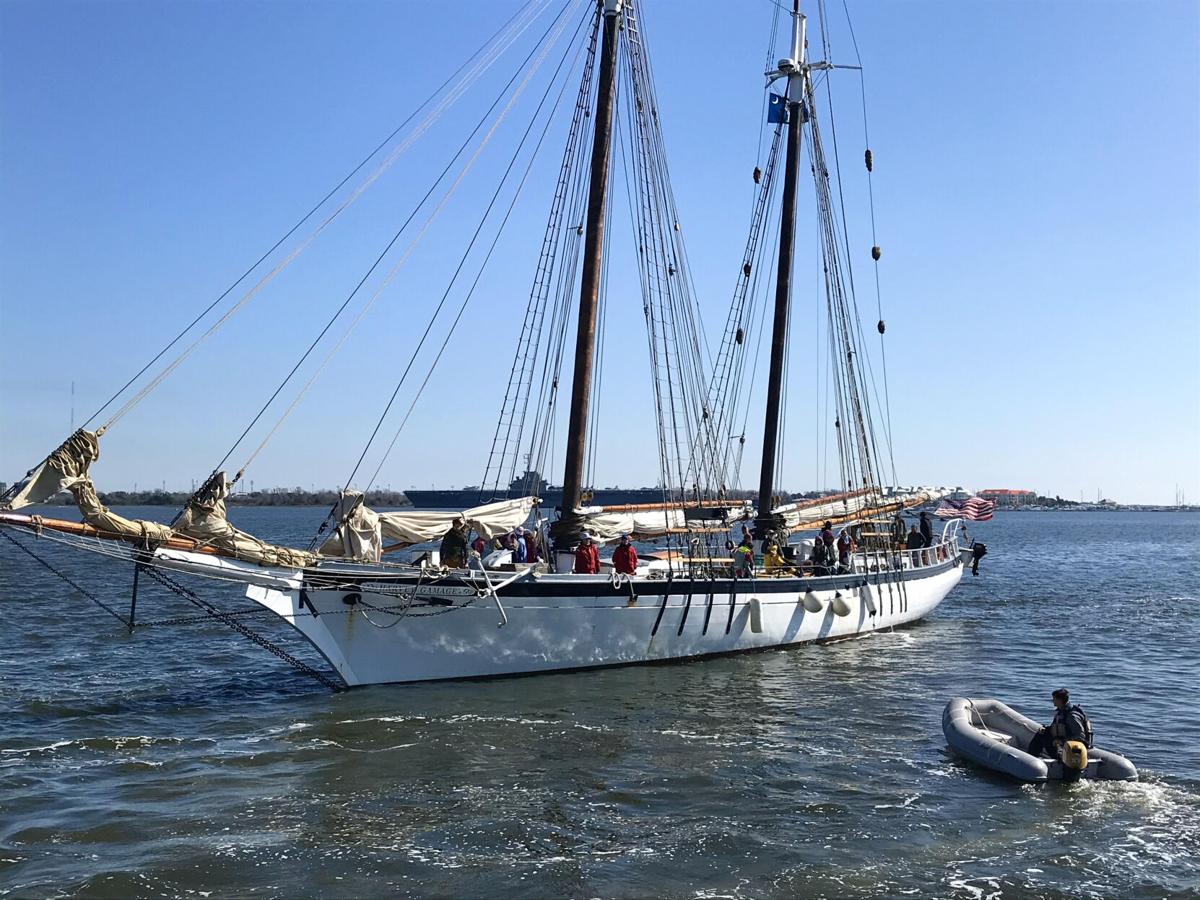 The Harvey Gamage, a schooner built in Maine in the early 1970s, has one diesel engine and must assess current and wind direction to dock properly. A dinghy provides assistance. Adam Parker/Staff 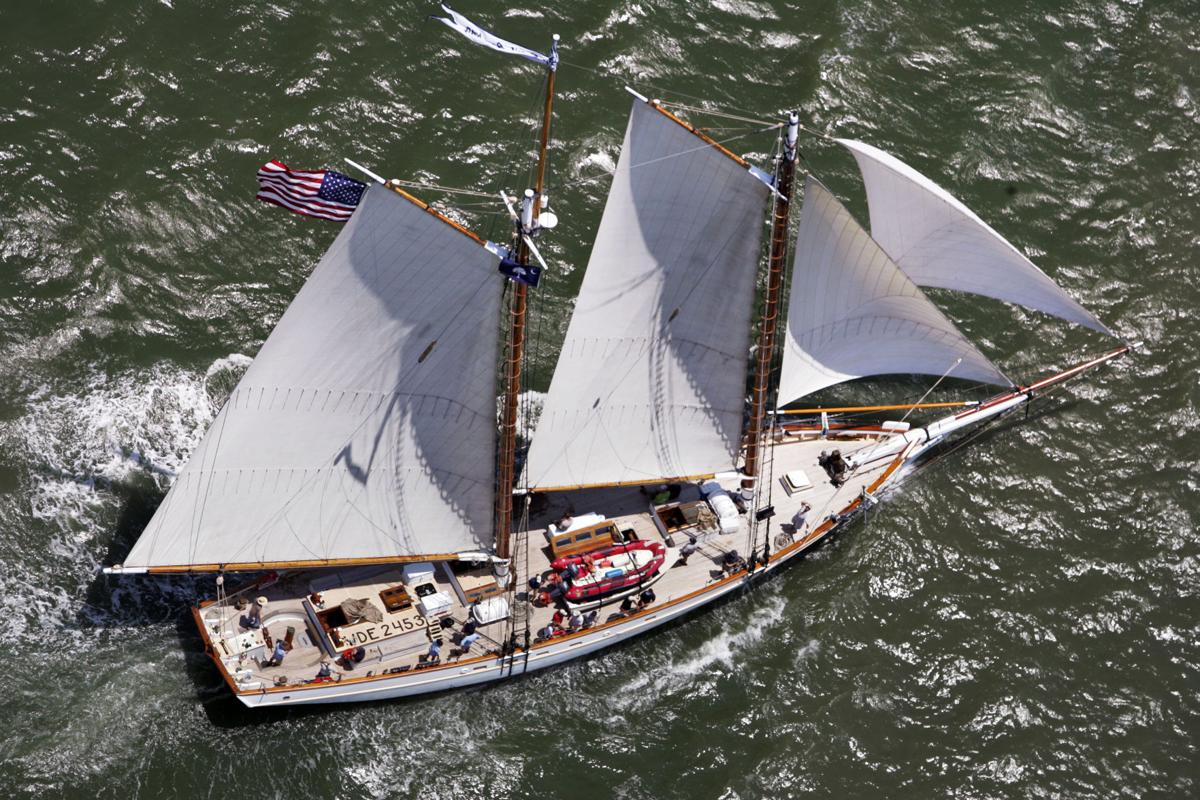 Thousands of students have been through programs aboard the Spirit of South Carolina, but the schooner has been docked and mostly inactive for months. File/Staff

Charles Porzelt, acting captain of Spirit of South Carolina, puts up a wind blocker before a reception for crew of the Spirit and the Maine schooner Harvey Gamage on Sunday, Feb. 21, 2021, in Charleston. Andrew J. Whitaker/Staff

The Spirit of South Carolina is a replica of an 19th century schooner that plied the waters of Charleston Harbor and the nearby coast to guide large ships into port. Adam Parker/Staff

Thousands of students have been through programs aboard the Spirit of South Carolina, but the schooner has been docked and mostly inactive for months. File/Staff

Editor's Note: This story has been updated with new information provided by The Spirit's nonprofit managers.

The Spirit of South Carolina, a 140-foot-long replica of a 19th century schooner that once plied the waters of Charleston Harbor, has been tied up at the dock for months, rendered mostly inactive by a series of unfortunate events.

It’s the showpiece of a nonprofit organization co-founded by hospitality leader Michael Bennett and car dealer Tommy Baker. The ship was made with local timber and other materials and completed in 2007. Its history has included some turbulence, and its managers have reconsidered the ship’s mission, purpose and use on more than one occasion.

Now the Spirit faces new opportunities, and another chance at reinvention. Potential partnerships with the College of Charleston’s Carolina Lowcountry and Atlantic World Program, or CLAW, and with Maine-based sister schooner Harvey Gamage could breathe fresh air into Spirit's sails, reinvigorating its educational mission and helping to get it back in action after a debilitating COVID pandemic.

But first it will need to check several boxes on its to-do list. It needs a captain and crew. It needs essential repairs. It needs a new certificate of inspection. It needs to bolster its cadre of 20 or so volunteers.

“It’s been pretty much dead in the water for the last nine months,” Volunteer Coordinator Bryan Oliver said.

Baker and Bennett said the overall financial standing of the nonprofit is good. There's no debt and money in the bank, Baker said. They have plans to address the mechanical problems in the next months and expect the ship will be able to set sail again soon.

In 2019, the nonprofit’s executive director, Fletcher Meyers, left the organization. A few months ago, its full-time paid captain, Dan Cleveland, disembarked. Oliver, an unpaid volunteer himself, volunteer acting captain Charles Porzelt, and the volunteer chef who looks after the boat are the only crew left.

The pandemic was akin to a hard grounding in the shoals of Charleston Harbor, with no crew available to haul the anchor out and kedge off the pluff mud. The trickle of revenue dried up like a riverbed on the far side of the dam.

Then came the lightning strike last year that fried the electronics and disabled the diesel engines.

The costs of keeping the boat are significant and the nonprofit always welcomes donations, Bennett said.

"It's a struggle to make a tall ship work in a good day," he said. "And then COVID hits."

But Bennett and Baker said they look forward to potential new partnerships that might help illuminate Spirit's seaway.

Oliver, Porzelt and the people who run the CLAW program are holding out hope.

Meanwhile, the Harvey Gamage sailed into Charleston Harbor on Feb. 20, with a crew that includes 15 Ashley Hall students, and tied up at the Maritime Center. It’s doing what the Spirit's leaders want to do: take students offshore and teach them a few things about astronomy, physics, history and the art of sailing.

Paula Harrell, Ashley Hall’s director of marketing and communications, said the school’s Offshore Leadership Program has been providing students with sailing opportunities for years. It’s a yearlong commitment with a curriculum that includes celestial navigation, the history of the transatlantic slave trade, the maritime history of Charleston, aspects of science and hands-on sailing experience.

The students on board the Harvey Gamage all quarantined for two weeks in order to sail from Brunswick, Ga., to Charleston, Harrell said. Normally, the trip — the culmination of the program — happens in the fall, but circumstances this year forced a change in the schedule. The routes differ from year to year. So do the boats.

The girls leave their smartphones on shore. Under the guidance of professional crew, they learn the ropes, hoisting and dousing gaff-rigged sails, tacking and gybing, gauging weather conditions and sea state, reading charts, joining to the watch rotation and more.

It can transform your stomach, too, when the seas are rough. But that’s part of the package.

The Harvey Gamage, a wooden 131-foot schooner, was built in the early 1970s. It’s typical of the kind of big Maine sailboat that once hauled timber or participated in the state’s fishing culture. It’s accustomed to big tides, rocky coastlines and colder weather. And it’s part of Maine’s own storied maritime history.

It could make sense to collaborate on educational programming, Oliver said.

“We would very much like to have them come to Maine in the summer, and visit them and sail with them in the winter,” he said. “It makes our capacity bigger if we have two ships.”

While the Harvey Gamage is in port in Charleston, its crew will be available to brainstorm ideas with the Spirit team.

“We would hope to help the Spirit of South Carolina get programs organized,” Agnew said. “We’re coming in to help.”

The Spirit is a replica of the 1879 vessel Frances Elizabeth. In 2014, the foundation in control of the ship was struggling with mounting debts and decided to sell it. In 2017, Bennett and Baker bought the boat at a foreclosure auction, refitted it to meet Coast Guard standards, then donated it to a newly formed nonprofit, Spirit of South Carolina Inc., for educational use.

Normally, it relies on around 15 crew and volunteer deckhands. Before the pandemic the nonprofit partnered first with The Citadel, then with the College of Charleston, to provide a “semester at sea,” but neither venture proved to be sustainable because of high tuition costs and lack of adequate interest among students.

Why not focus on Charleston Harbor’s maritime heritage — the stories of Robert Smalls, the Mosquito Fleet, and the history of so many unsung Black seamen?

And that’s where CLAW comes in.

Its director, Sandy Slater, said the program is focused on, among many topics, the fascinating history of Black mariners, and a collaboration with the Spirit makes a lot of sense. After all, their missions converge. Both are concerned with educational outreach, both are interested in Charleston’s maritime history, and both desire institutional partnerships.

Both also are constrained financially because of the pandemic, but Slater is committed to maintaining a relationship with the Spirit so students can have access to the sea and so the nonprofit can have access to scholarship, she said.

Already Blake Scott, a professor of international studies and an accomplished sailor, has designed a curriculum for AmeriCorps volunteers using the Spirit as their classroom. Much more could be done, Slater said. The history is rich.

“Because Charleston was an urban slave city, enslavers worked with, and gave permission to, enslaved people, especially those skilled artisans, to work in town and keep a portion of the pay themselves,” she said. “So we see a number of people working and buying their freedom, living and working in Charleston.”

Many of these people were free sailors of color, or Atlantic Creoles as they were called. They circulated via the ports of Charleston, often carrying not only cargo but vital information about what was happening in the world.

The White power structure of South Carolina sought to deny Black people access to the news, especially after the failed Denmark Vesey slave revolt in 1822. The city’s rulers didn’t want the Black population, which during the much of the 18th and 19th century outnumbered Whites by large margins, to learn about the Haitian Revolution or other rebellions.

“You see lots of laws trying to restrict people of color from meeting or congregating, preventing movement,” Slater said. “Slavery in America was exceptional in its brutality compared to rest of the world.”

By the early 1800s, this forceful censorship ran contrary to international trends. Elsewhere, the slave trade was on the wane. In the U.S., white supremacy was intensifying.

“The enslaved population in the American South are very aware that their circumstances are very different than other people of color,” Slater said. “It’s a heartbreaking realization.”

It was the maritime networks through which information about the status of Black people passed. This was an urban phenomenon, and unique to port cities where no secrets could be kept, Slater said.

“Free people of color in Charleston enjoyed a degree of financial and professional success,” she said. “They could maneuver into better social positions without the constant threat of violence against them.”

White people patronized Black cobblers and blacksmiths, masons and caregivers. Civil interaction between the races was commonplace, even as institutional discrimination and oppression became more and more entrenched.

Thus, Black people in Charleston persevered, and they forged unique cultural identity informed in large measure by the waterfront. As a port city, Charleston is intrinsically connected to the Caribbean and to West Africa, Slater said. It is really an international city with dynamic and accomplished Black population.

“This is not to diminish the cruelty and violence of slavery,” Slater said. “It’s to call attention to the fact that the Black experience in America is not defined by enslavement. It’s defined by people doing the best they can under the circumstances.”

These are some of the lessons that could be learned aboard the Spirit.