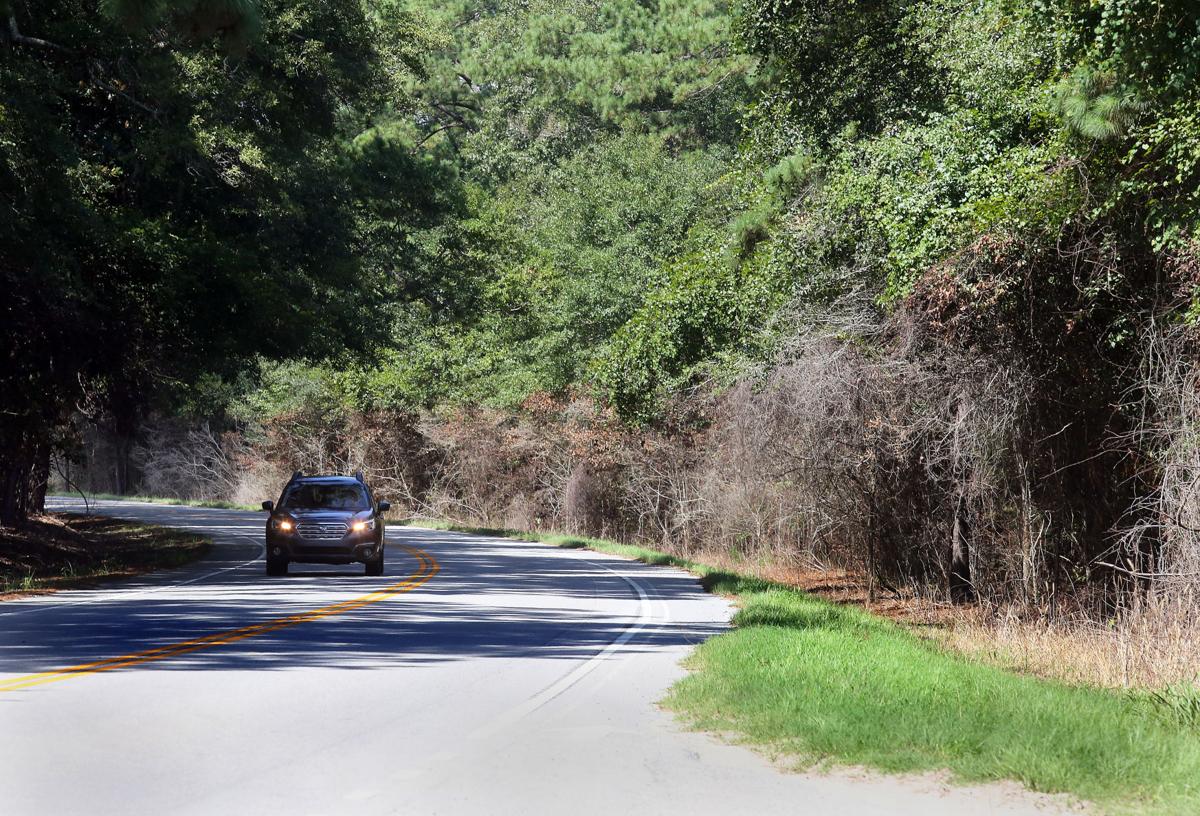 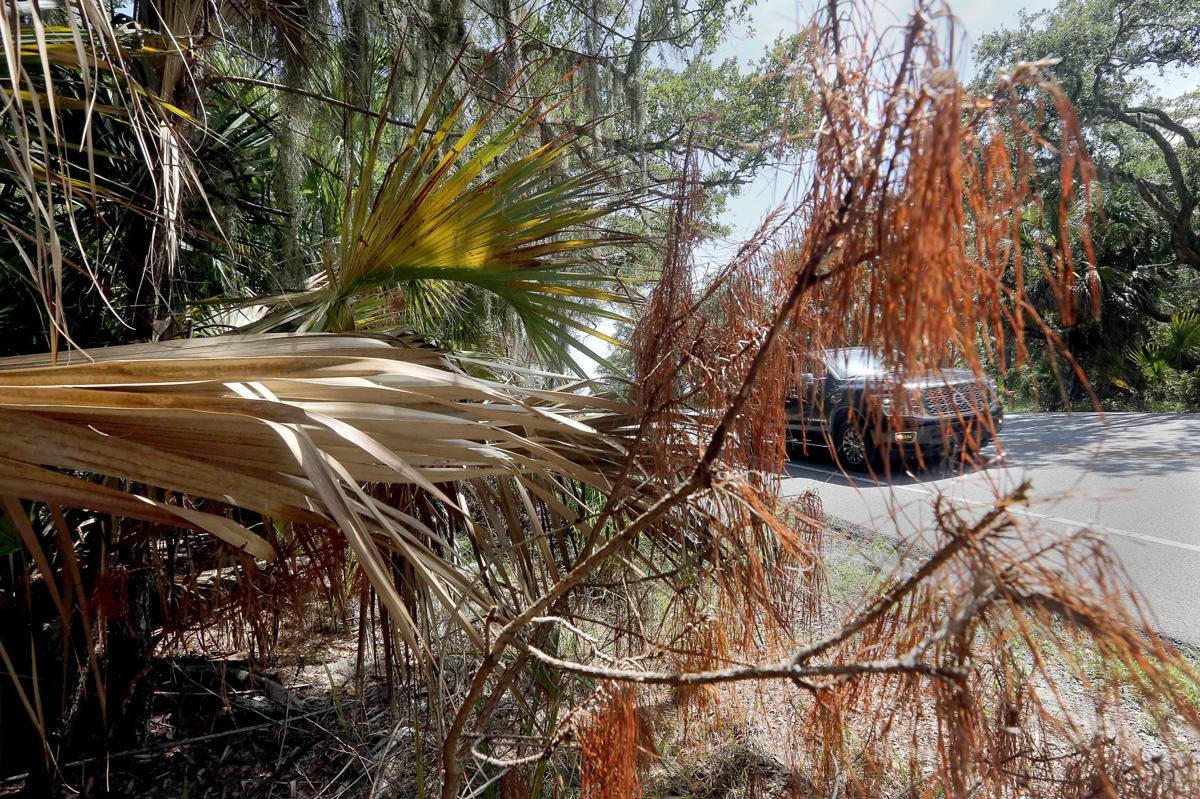 The South Carolina Department of Transportation sprayed foliage along S.C. Highway 174 on Edisto Island to suppress growth. Residents worry about the unsightly results and impact on the environment. Brad Nettles/Staff

Chemical spraying along roads in the Charleston area has left unsightly, browned foliage behind and residents are worried about how the herbicide affects the environment.

But the S.C. Department of Transportation said the chemical used is safe, and that the spraying must be done as the agency prepares to inspect bridges around South Carolina.

The spraying has stoked particular uproar on Edisto Island, where S.C. Highway 174 — the 17-mile thoroughfare that leads from the island's entrance to its beach — was treated in June.

The road was designated a National Scenic Byway in 2009, said Marian Brailsford, who led that effort in her former job as director of the Edisto Open Land Trust.

Ida Tipton, a resident of Edisto Beach, drives the entire length of 174 whenever she has a medical appointment or other commitment off the island. She said she's seen debris in Edisto Beach State Park and damaged trees along the road. She worries the view is a poor greeting to tourists who soon will arrive for Labor Day weekend.

"It's worse than I've ever seen in the 20 years I've been here on this island," she said. "Right before the last holiday of the year we’ve got nothing but debris on Highway 174."

Brush management is often a touchy subject in the Lowcountry, populated as it is with sensitive marshlands, moss-draped live oaks and protective residents. Multiple communities have protested recent tree-trimming by electric utility Dominion Energy.

But in the case of roadside brush management, SCDOT's priority is to make sure the roadway is safe and visibility is maintained, said Jennifer Gruber.

She manages the agency's vegetation control across the state, which is done by mechanical trimming and chemical sprays.

The effects look so severe on Edisto and other parts of the Charleston area because work crews applied the chemical during the growing season, a new technique, Gruber said. The spraying is usually done while plants are dormant, she added, and that's less obvious.

Brailsford said many on the island are concerned about the environmental effects of spraying a defoliating chemical so widely, as Edisto is laced with more than 50 creeks, streams and tributaries. Using chemicals, she said, doesn't jibe with the plan laid out when 174 became a scenic byway.

"If bushes and small trees are in the way, we’ll cut them down," Brailsford said. "Why use poisons, why subject the landscape to three or four months of hideous brownout that looks like a fire rolled through?"

The concern also comes as juries have awarded large verdicts to plaintiffs who claimed they were injured by exposure to the Monsanto Co.'s popular Roundup weedkiller.

The chemical used by DOT's work crews is sold under the brand name Garlon 3A. It was chosen because it's approved for an aquatic environment, such as the marshes and transitional areas around bridges, Gruber said.

DOT has to inspect bridges around the state this year, so brush has to be cleared for inspectors to see all parts of the structure, she added.

At the same time, the chemical's Environmental Protection Agency-approved product label warns against using the chemical in areas where soils are permeable or in salt water bays or estuaries.

Vijay Vulava, a professor at the College of Charleston who studies environmental contamination, said chemicals like Garlon 3A vary in how well they stick to their intended targets. While the chemical is designed only to affect weeds and woody brush plants, it's unclear how much might run off during a rainstorm, he said.

Gruber said DOT's hired crews are aware of the possibility the chemical could leach out of the right of way. Crews mix it with another compound that makes it more likely to stick only to the plants it's sprayed on.

Kevin DeLorenzo, who investigates herbicide and pesticide use at Clemson University, said Garlon 3A is a typical chemical to use to clear brush next to a road. He's gotten calls about DOT's recent spraying but said it's too late to track whether the chemical spread in the environment.

"Two months is a pretty long time," he said.

Now, people on Edisto are left with 20-foot-high corridors of burned-out plants. DOT crews will eventually grind up the dead brush for mulch, Gruber said, but the earliest that would happen on Edisto is November.

"My preference would be to see it done much quicker," said Jane Darby, mayor of Edisto Beach. "I understand they have high-priority issues and this might not be on the top of the list, but from an aesthetic standpoint, the sooner, the better."