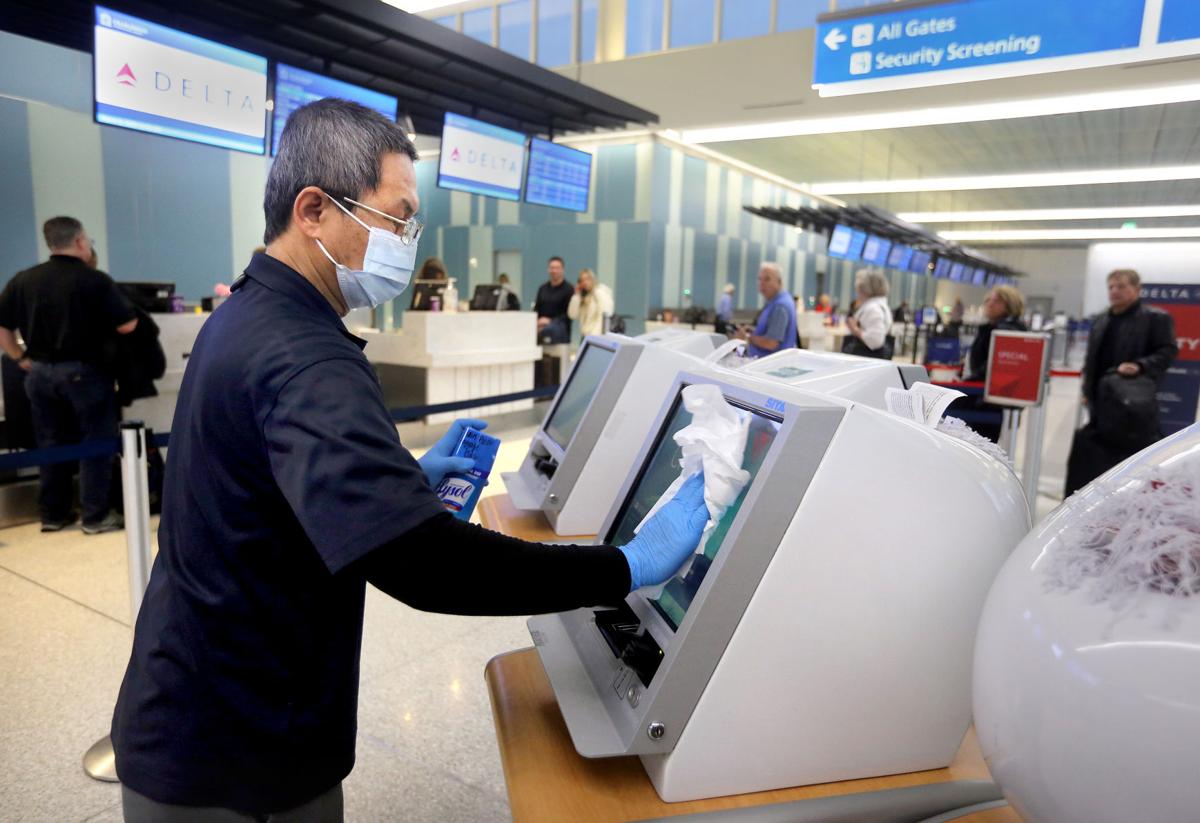 Jaime Dimafelix uses a disinfectant to clean the self check-in monitors at Charleston International Airport on Thursday as a precaution against coronavirus. Brad Nettles/Staff 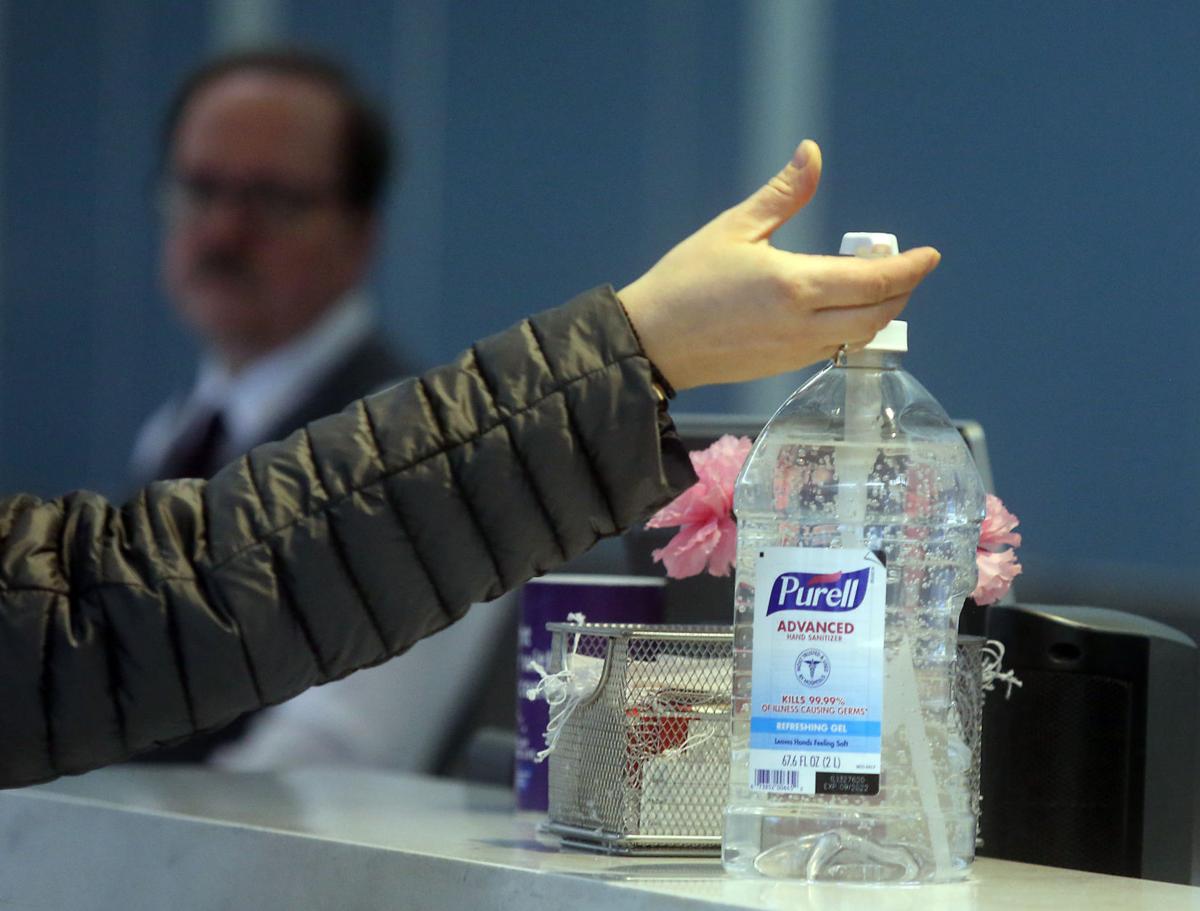 Charleston International Airport has put hand sanitizer at all airline check-in counters for passengers to use as a precaution against coronavirus. Brad Nettles/Staff 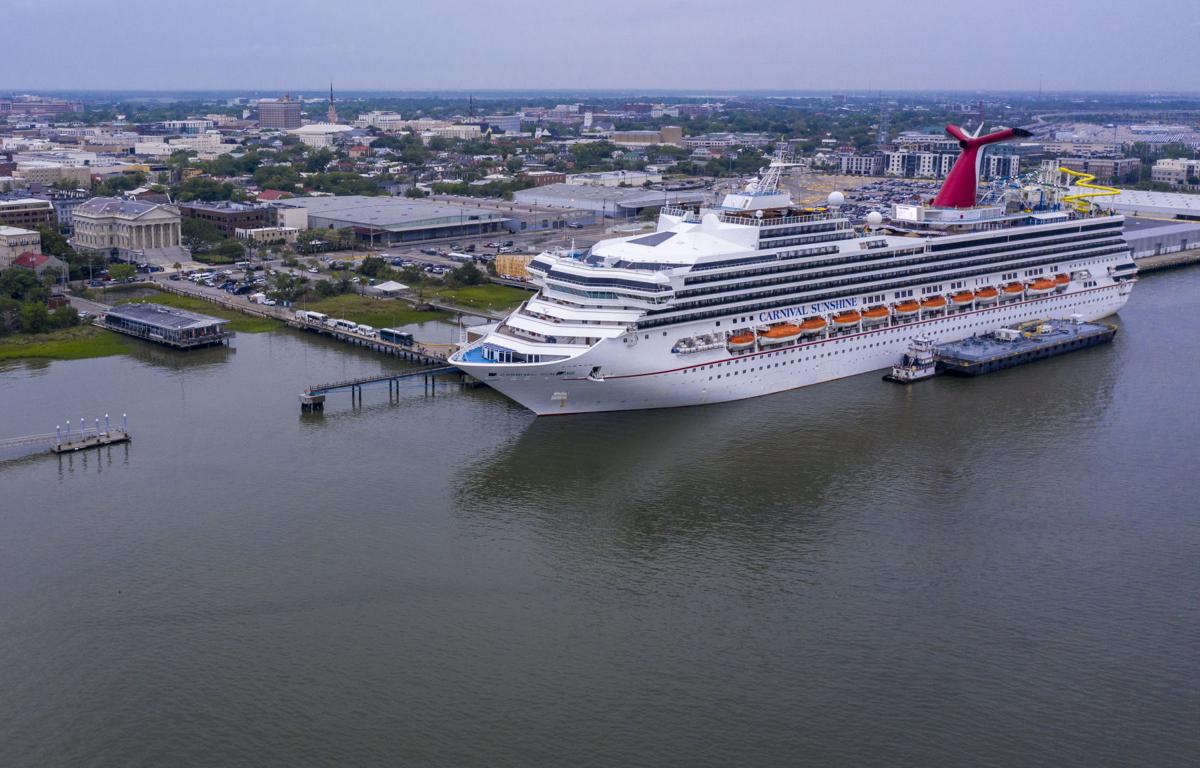 All cruise ships entering the Port of Charleston have to be cleared by the U.S. Coast Guard and U.S. Customs and Border Patrol. File/Lauren Petracca/Staff

With multiple presumptive positive cases of a dangerous strain of the coronavirus detected in South Carolina, the travel industry is bracing for what's next.

“This is kind of like a hurricane,” said Wayne Smith, chair of the College of Charleston’s Department of Hospitality and Tourism Management.

It’s similar in that the industry knows it has to be prepared to absorb losses, but there’s a key difference: the impact of the virus, known as COVID-19, is being felt globally.

The event and the cruise ship industries will likely be the “first and hardest hit,” Smith said.

On Sunday, the U.S. State Department advised Americans against taking cruises, citing a warning from the Centers for Disease Control and Prevention that says the ship environment presents a higher risk of contracting the disease, especially for people with underlying health issues.

At the Port of Charleston, cruise activity was operating normally, said State Ports Authority spokeswoman Liz Crumley. Passenger levels have not been negatively affected, and no pleasure ship calls have been canceled.

Major draws like the Volvo Car Open and the Cooper River Bridge Run were still on as of Monday, but the visitor industry was starting to see groups reschedule or cancel stays in the Palmetto State.

NASA contacted Charleston County last week to announce that a supplier summit it had planned to host at Trident Technical College would be postponed for nearly a year because of new travel policies related to the virus.

On Monday, the Daniel Island-based technology company Benefitfocus opted to shift its One Place event, which brought about 1,200 to Charleston last year, online to protect the health of attendees. The company is reimbursing registration fees, canceling hotel bookings and encouraging people to call off their travel arrangements.

Explore Charleston CEO Helen Hill said Monday the region was seeing “an increased impact on group and leisure travel” due to coronavirus fears. But, she said, more groups have opted to reschedule their events rather than cancel them.

Occupancy rates at hotels along the coast were down the last week of February by anywhere from 4 percent to 14 percent, according to the state tourism department. Parrish said that was likely because of early declines in international travel, a trend that's expected to continue.

Most tourists coming into the Palmetto State from other countries head to coastal hubs like Charleston, Hilton Head Island and Myrtle Beach, which means those places will likely see the brunt of declines in international excursions.

What it means for travelers

For those who do choose to travel in the coming weeks, they may find unusually low prices.

Airfares have been falling as demand drops. Round trip fares from Charleston to Seattle — the Puget Sound area has one of the largest clusters of COVID-19 cases in the U.S. — were listed at a $178 discount from the typical price on Monday.

Also, most carriers have relaxed their policies for changing flights. Delta, United, JetBlue and American Airlines are all waiving change fees for most tickets issued this month.

At Charleston International, flights went on as scheduled. High-touch areas are being sanitized more often, and hand sanitizer has been placed in public areas, like the airline ticket counters and security lines.

For people planning to board Carnival cruises in Charleston, schedules are currently unchanged. The company's Sunshine ship left Charleston Harbor on Saturday and is expected to return and load up with more passengers on Thursday.

Passenger numbers reported by the port for February don’t indicate any drop in volume. Last month, 26,248  passengers came through the port, which was at least 12,500 more people than February 2019 when Carnival was operating a smaller ship from Charleston.

All ships have to be cleared for entry into the port by the Coast Guard and Customs and Border Patrol. The city of Charleston said it does not have jurisdiction over whether a cruise ship comes into the port or not.

What it means for the industry

“The toughest thing is going to be what employers do,” said Smith of the College of Charleston.

Smith knows firsthand how an outbreak can hurt the visitor industry. In 2003, when the SARS virus was spreading in Canada, Smith was working as a tourism development coordinator in Ontario.

Even if the local hospitality industry were to experience a substantial downturn, Smith said employers should do their best to avoid laying off workers. They should instead use that time to invest in training, which can help with retention and allow businesses to ramp up more quickly when visitors return.

Smith also said the industry should be prepared to spend on a recovery strategy, as it has done after other unexpected disruptions.

For the past couple of years, the state tourism department has directed funds to specifically promote fall tourism on the South Carolina coast to offset the losses caused by hurricanes and other severe storms.

Hill of Explore Charleston said the hospitality trade's disaster preparedness plans are informing some of its approach to the uncertainty surrounding COVID-19.

Your questions, answered: What we know about coronavirus' impact on SC so far

“While it's unfortunate we've had to lean on those plans the past several years, it also means our industry is well versed in coordinating efforts during evolving situations that might disrupt existing plans for travel to our region,” Hill said.

At the state level, Parrish said his agency is considering redirecting some advertising attention from fly-in markets to drive-in markets.

Since travelers may perceive traveling by car as having a lower risk of exposure to the virus, people within driving distance may be more motivated to make a trip despite concern over the illness.

The thing that's not possible to track, Parrish said, is visitors who typically would have started planning a vacation around this time but aren’t doing so because of concerns over the coronavirus' spread.

Meanwhile, hotels are doubling down on cleaning routines and visitors' centers are getting extra scrubs.

"I think it's really important that we have an industry that's doing it's best to keep everyone as safe as possible," Smith said. "No one wants a visitor to come and have them get sick."