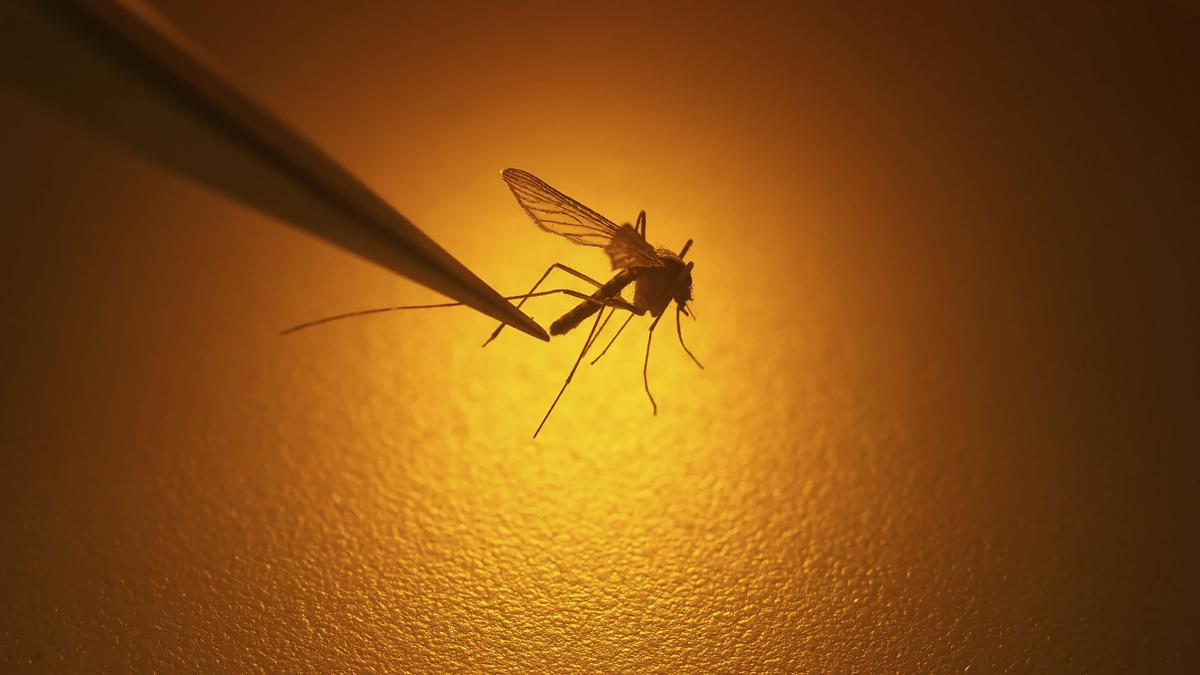 Entomologists say there are now 61 known species of mosquitoes in South Carolina. In 1995, the count was in the 50s. File/AP 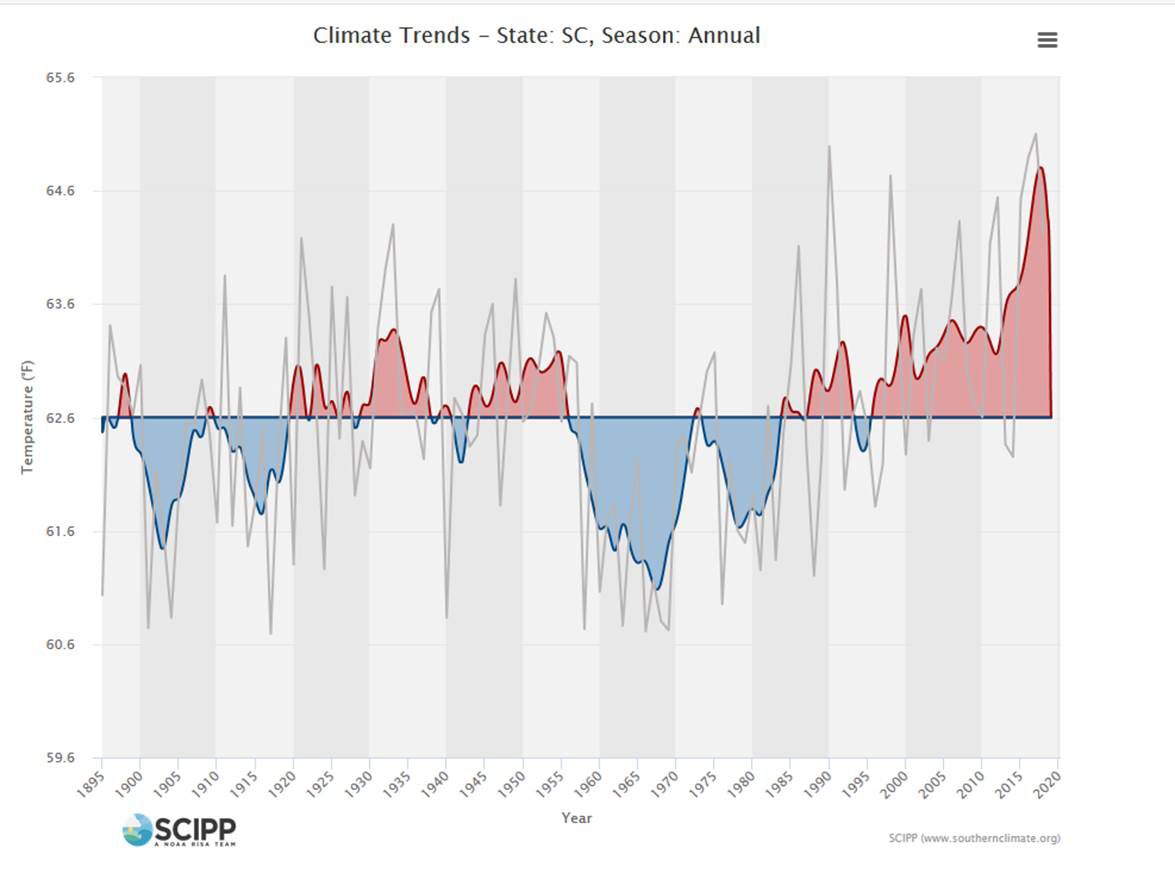 South Carolina has trended hotter year to year since the 1980s, with a steep spike in the last decade. Southern Climate Impacts Planning Program/provided 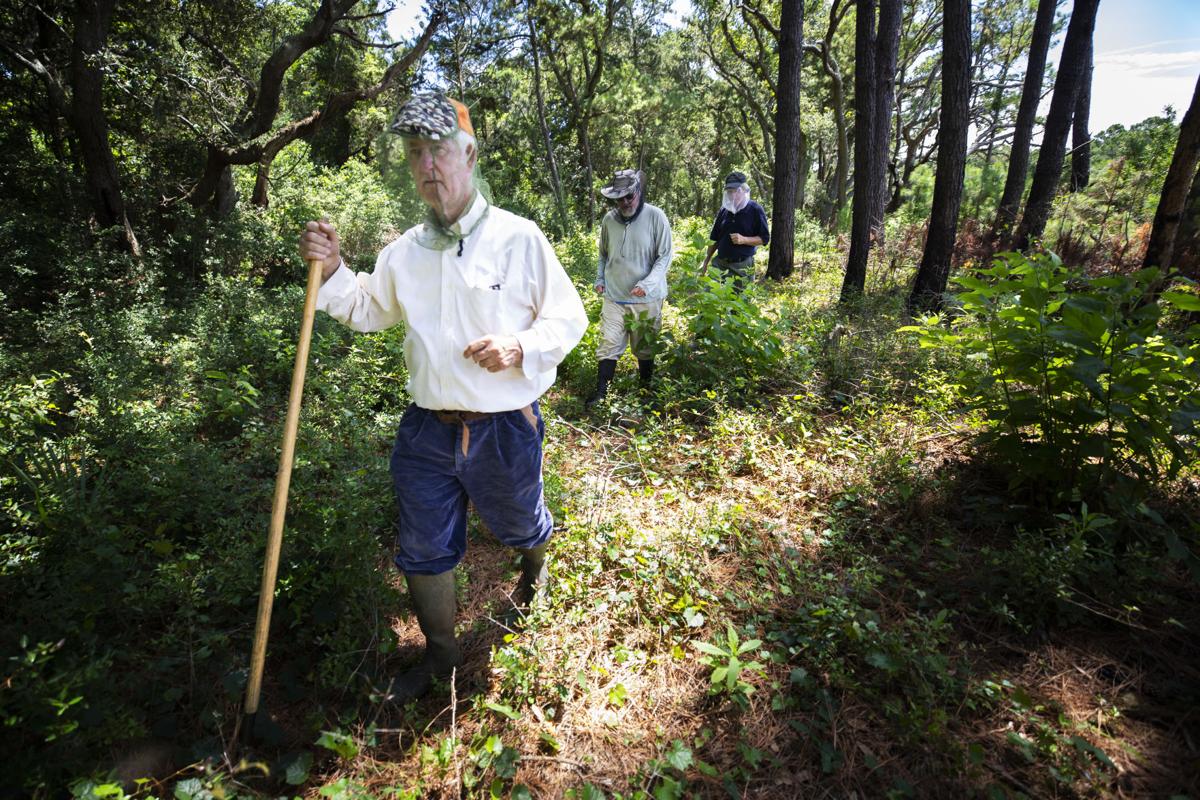 Entomologists say there are now 61 known species of mosquitoes in South Carolina. In 1995, the count was in the 50s. File/AP

Mosquitoes are a good way to show how close South Carolina is to becoming a climate warming "hot spot."

More mosquitoes — and more mosquito species — tend to turn up in specific places that are hotter and wetter.

A run of years where the state's coast has seen both hotter days and flooding rain has people seeing different mosquitoes than they're used to — everything from monster-size gallinippers to Zika-carrying fever mosquitoes thought to be a more tropical species.

How many mosquitoes varies year to year as well as rain to rain, so it's hard to quantify whether the numbers have grown in the long term. There's also been no detailed research into historic changes of the number of species here, but there are more than there were as recently 25 years ago.

South Carolina has seen an accelerating trend of a warmer annual mean, or average temperature since the 1980s, with a huge spike in the past decade.

Climate hot spots are regions where the average temperature has climbed more than the 3-degree Fahrenheit global mark (2 degrees Centigrade) considered to put severe stresses on life from vegetables to people, and may be a point of no return.

'Too hot to believe' extreme days to get more frequent in SC, study says

For example, the heat hasn't significantly impaired South Carolina's resources, one of the stresses that indicates a hot spot. But it has impaired the state's environment.

Although most of the current hot spots tend to be in more extreme northern or equatorial regions, they also tend to be coastal. Ecosystem damage is showing up here that is associated with warmer regions.

Or, to put it right in your slapping hand, there's more skeeters.

A report released this month by an international group of scientists indicates that sea rise is accelerating as glaciers and snow melt, while oceans are getting more acidic and dying.

The Intergovernmental Panel on Climate Change warned that if steps aren’t taken to reduce emissions and slow global warming, seas will rise 3 feet by the end of the century, with far fewer fish, less snow and ice, stronger and wetter hurricanes and other worsening weather.

For some places, it will get worse quicker than others. South Carolina has a toe in those waters.

The state's annual mean temperature has risen about 2 degrees since the 1980s — a longer, steeper climb than anything seen since the 1890s in the periodic back-and-forth of warmer and cooler years.

Global measures set out by the Intergovernmental Panel on Climate Change indicate a 2-degree rise would mean a high risk of extreme weather as well as the loss of environmental features considered singular to the region and vulnerable.

The relationship of global impact to local impacts isn't one to one. But if you took those measures and applied them to the state, the correlation is remarkable.

The recent years of extreme temperatures, drought and flood speak for themselves. Maybe the most significant environmental feature of the region is the marine-species nursery of the coastal salt marsh. It's begun dying off in patches that are becoming more frequent and larger.

Meanwhile the marsh is being swamped by rising seas. The Association of State Wetlands Managers estimates that 80,160 acres are lost nationwide each year and the rate of loss is accelerating.

A 2018 University of Florida study found the Southeast coast is becoming a hot spot of recurring, short-term rises in sea level. Its authors concluded the rises were a key risk factor for coastal vulnerability. The National Oceanic and Atmospheric Administration made the same finding in a study released in the next year.

The recurring rises have been linked to the Gulf Stream flow weakening as a consequence of glacial ice melt and other climate trends.

A number of factors contribute to a specific region being warmer or colder than another, said David Barbeau, a University of South Carolina geology professor. One of the significant factors is how close to the ocean it is and how the ocean circulation and atmospheric circulation interact.

"As global temperatures change, there can be profound effects on the patterns and strengths of the circulation of the ocean and atmosphere on these short timescales. The end result is that some areas get much warmer while others get warmer at a slower rate," he said.

Direct impacts of climate warming are showing up particularly along the coast in the Carolinas, said Kenneth Kunkel, an North Carolina State University atmospheric science professor. He points to the historic floods of the 2015 rainfall, Hurricane Matthew in 2016 and Hurricane Florence in 2018.

"The waters in all those events were warmer than the overall normal," he said, and that translated to 10 to 20 percent more rain.

But maybe it's easiest just to put it in terms of mosquitoes.

Entomologists say there are now 61 known species of mosquitoes in South Carolina. In 1995, the count was in the 50s. To put that in perspective, worldwide there are more than 3,000 species.

An epic story about power, beauty and how one of SC's last great places faces new threats

But several mosquito species are new to the Southeast, said Shannon LaDeau, a disease ecology scientist at the Cary Institute of Ecosystem Studies in Millbrook, New York.

While a number of social and development factors such as international travel have contributed to the trend, shorter and warmer winters allow the species to get a foothold and stay active longer, she said.

“If the warming and the high atmospheric carbon dioxide keeps going on, there would be more (mosquito) species, so the population would be more diversified,” said Chufel Tang, a China Agricultural University entomologist who was one of the authors of a 2019 study on mosquitoes respond to a warming climate.

“There would be also more places with longer time that mosquitoes could breed. Thus the mosquitoes would have population growth, bringing higher density,” he said.

As a coastal state South Carolina faces some serious problems, Kunkel said, including sea rise flooding and stronger hurricanes both linked to warming ocean and air.

"I don't think there's a tipping point where everything goes crazy," he said about the 3-degree mark. "It's more of a gradual thing."

Temperatures are forecast in the mid-90s Thursday and Friday, according to the National Weather Service. But there's some relief on the way.