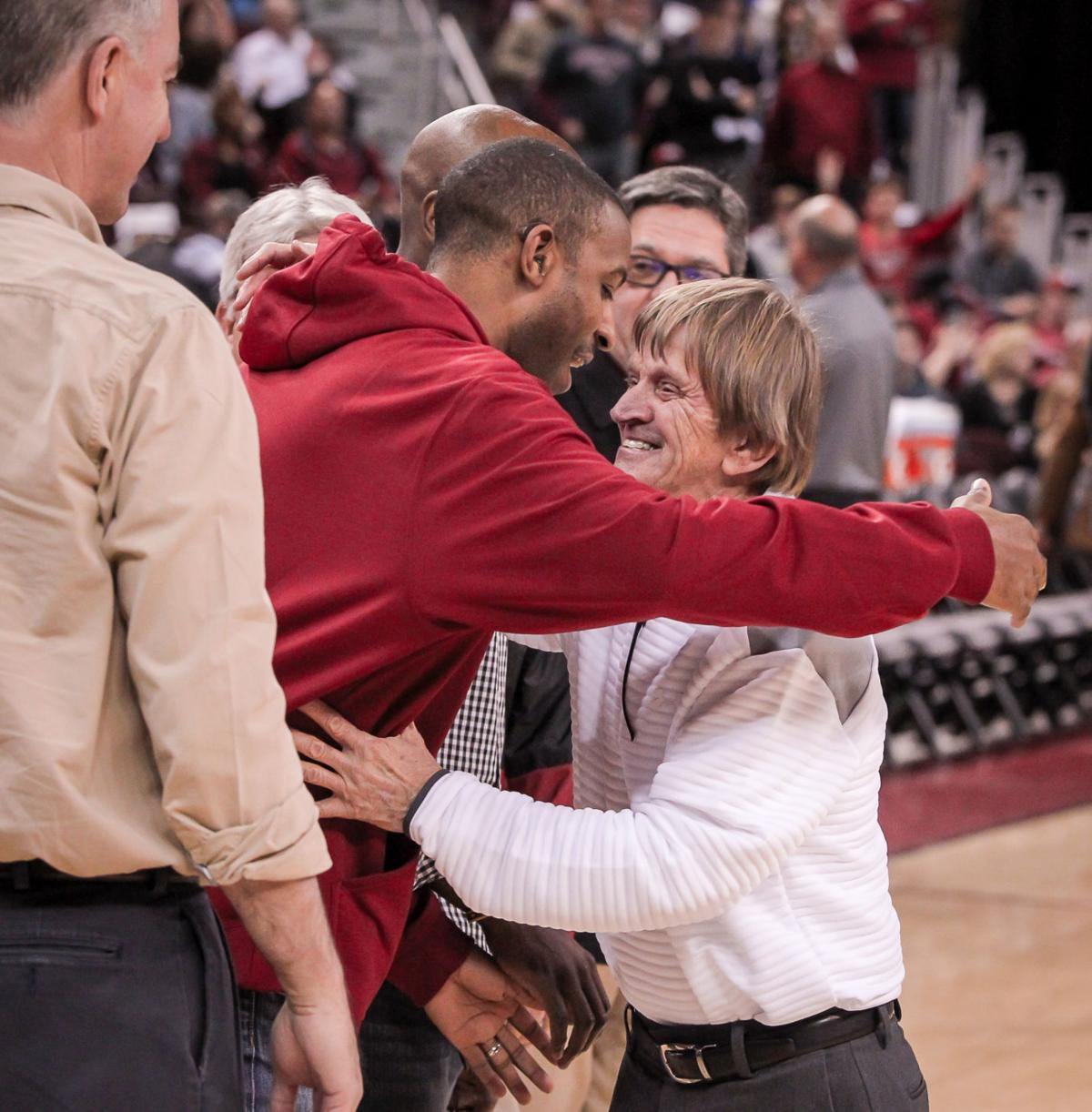 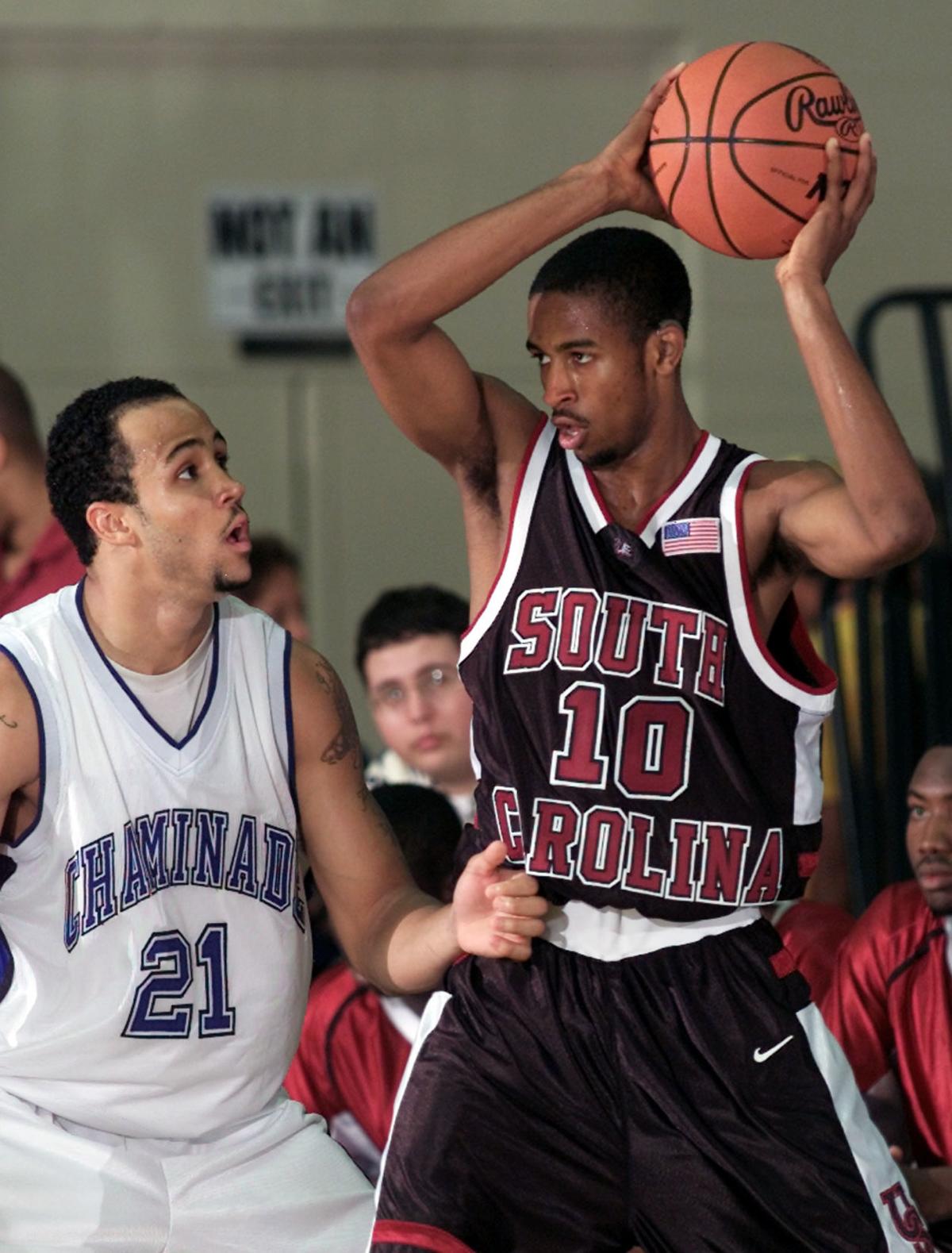 Chaminade's Albert Powell, left, defends South Carolina's Jamel Bradley in the second half of a first round game in the Maui Invitational in Lahaina, Hawaii in November 2001. Bradley led South Carolina 17 points as they defeated Chaminade 74-61.(AP Photo/Michael Conroy)

A former college basketball star has been fired from his job as a Richland County sheriff's deputy amid allegations that he acted inappropriately with female students while working as a school resource officer.

Jamel Bradley, a record-holding former guard for the University of South Carolina, was terminated on Oct. 30 after “critical information” surfaced during an internal affairs investigation, according to court records. It was unclear from those records just what that information was.

The investigation was prompted by an ongoing federal lawsuit in which a female Spring Valley High School student in 2018 accused Bradley of assaulting her multiple times while she was a freshman and sophomore. The allegations include unwanted kissing, touching and fondling, according to the lawsuit.

Bradley, 40, denied involvement but acknowledged not turning on his body camera during "several interactions with the student," according to personnel documents obtained by The Post and Courier through an open records request from the Richland County Sheriff's Department. He was "purposely non-cooperative" during a polygraph examination, according to a personnel document.

Robert Garfield, an attorney who was representing Bradley and the sheriff's department in the federal lawsuit, did not respond to an email requesting comment Wednesday. Court papers show Garfield on Wednesday asked to be withdrawn as Bradley's attorney in the case.

As part of the federal case, Richland County School District 2 turned over 64 pages of messages between Bradley and another female Spring Valley student during an eight-month period spanning 2015 and 2016.

Bradley had come under scrutiny for his ties to that teen after a colleague spotted them together at 10:30 p.m. in the parking lot of a Target store in Columbia in December 2015. He was reprimanded for that incident after a one-day internal probe, records show.

The sheriff's department said many of the emails between Bradley and the student "appeared to be personal in nature and/or did not involve official school or law enforcement business," in a document filed as part of the federal lawsuit.

It wasn’t the first time Bradley faced accusations of inappropriate interactions with female students. Bradley was hired by the department in 2007 and assigned as a school resource officer at Spring Valley in 2009, according to court records.

He had been accused of having an affair with a student in 2016, according to internal affairs documents. Bradley had reportedly sent photos. Bradley denied having a sexual relationship with any student at Spring Valley and said he never sent any sexual text messages, including pictures, to a student at the school, according to personnel documents. An investigation of the accusations stalled after the complainant passed on meeting with deputies.

In 2011, a cheerleading coach from another high school reported that Bradley may be having a personal relationship with a cheerleader.

The sheriff's department internal affairs division said the allegation was unfounded, documents show, but Bradley was "counseled." Bradley had "friended" the student on his Facebook page. He was told not to do that.

"It was also explained to him that engaging in any extracurricular conversations or activities with female students, regardless of the perceived innocence on his part, can be misinterpreted by students and adults as something more than professional," according to a department training document.

In 2010, he was “verbally counseled” after it was discovered that he was giving female students a ride home in his patrol vehicle, personnel documents show.

When the allegations in the federal lawsuit were first reported to the sheriff's department, they were reviewed by the criminal investigations division's special victims unit, “since there had been past allegations that were similar in context,” according to a 2018 department memo. The investigation was closed soon after.

After the probe had ended, the female student and a social worker met with a department investigator during an outpatient treatment session. The investigator told the student the review of the incident was “prematurely closed” after it was “abruptly taken away” from the officer, according to the federal complaint. The investigator went on to say that Bradley was “above reproach.”

James B. Moore III of the Evans Moore law firm is one of the attorneys representing the girl, referred to as Jane Doe in court documents. He said the female student "is prepared to fight until justice is served and this goes far beyond the recent termination of Deputy Bradley."

A new sheriff is in town, but Chester's scars offer lessons for other rural SC counties

Bradley’s firing is a blow to his image that was built as a top USC basketball player who excelled while having a hearing impairment.

The West Virginia native led his teams in scoring his junior and senior seasons. As a senior, he averaged more than 13 points a game, leading the Gamecocks to the 2002 championship game of the National Invitation Tournament at Madison Square Garden in New York City.

He still owns USC's career record for three-point shots made.

As a basketball player, and a deputy, he met with children with hearing impairments to talk with them about his experience, according to news articles and personnel documents.

One elementary school principal, in 2016, wrote that Bradley met with a second-grade student who asked a teacher if she thought he would ever be able to be a police officer. Bradley pumped up the boy's spirits and provided inspiration, according to an email in Bradley's personnel file. "I knew you would want to know how great Jamel is," the principal wrote.

Richland Sheriff Leon Lott, a USC basketball fan, got to know Bradley after watching him as a player, according to a 2017 article in The State newspaper.

Lott told the newspaper he recalled asking Bradley what kind of work he wanted to get into after meeting him at a prayer breakfast a decade earlier.

"He wanted to work with kids," Lott told The State. "I said, 'Good, you’ll make a great school resource officer.' "

The federal lawsuit faults the sheriff's department for not properly investigating reports of inappropriate conduct by Bradley.

The Target parking lot incident was investigated as a “supervisory inquiry” instead of being handled by the department’s internal affairs office, according to court records.

A department spokeswoman confirmed that Bradley was fired last month but declined to comment further, citing the pending litigation.

The review of the Target incident lasted one day and consisted of the supervisor speaking with Bradley and the female student, according to court records. The student’s parents weren’t notified, nor was the State Law Enforcement Division. The school district also did not perform a Title IX investigation into the matter, records show.

A district Title IX compliance officer also did not investigate the reports of sexual assault detailed in the federal lawsuit, according to the complaint in the case.

In a statement, the school district said it cannot comment on specifics of the case due to a confidentiality order imposed by the court. But the district said it disputes many of the allegations in the lawsuit and "believes appropriate actions were taken by the administration."

The sheriff asked for an internal affairs investigation this summer after Lott became aware of the emails between Bradley and the student, according to court records.

On July 26, Lott removed Bradley from his school resource officer role and re-assigned him to the department’s warrants division.

“As a result of an active internal affairs investigation, additional information surfaced on Oct. 30, 2019, regarding Bradley’s interactions and/or relationship with the female student,” according to court records.