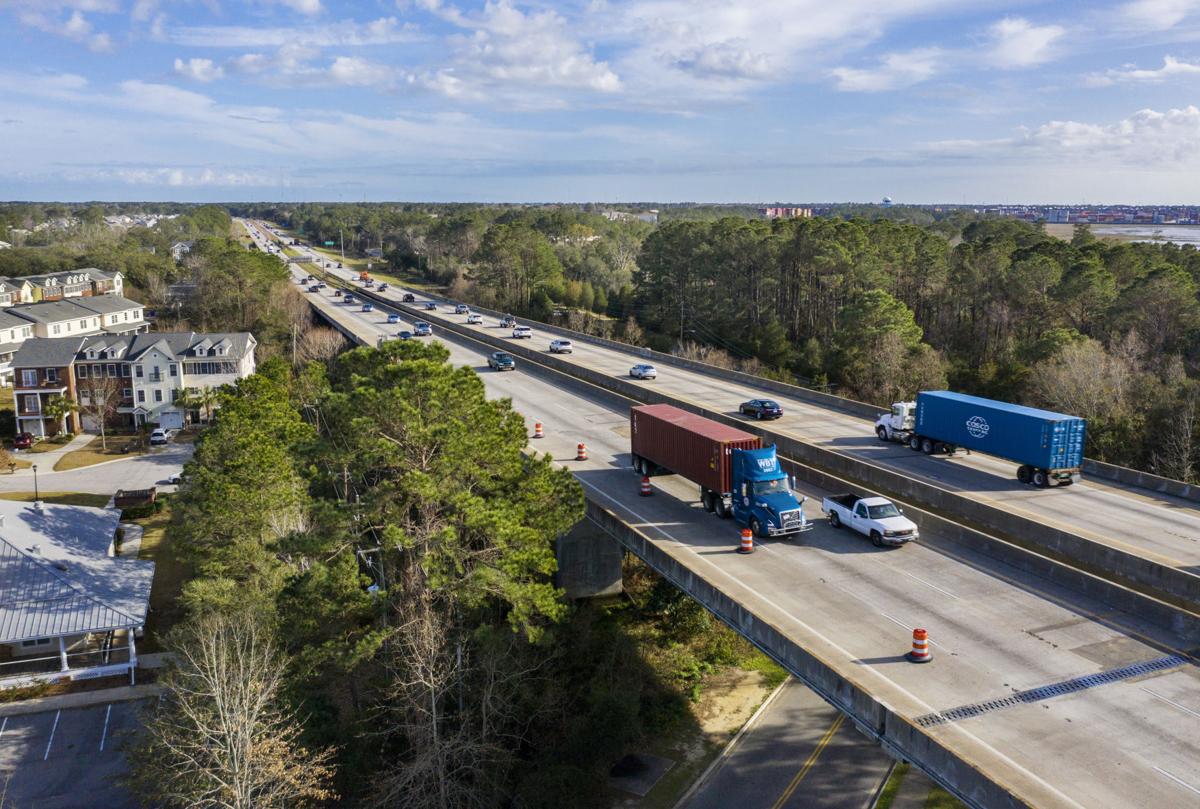 Traffic moves along Interstate 526 on the Mount Pleasant side of the Wando River Bridge on Monday Feb. 10, 2020. The Etiwan Pointe townhouse development is on the left. Now, the state plans to double the width of the highway from four to eight lanes, all the way to Mount Pleasant. Lauren Petracca/Staff 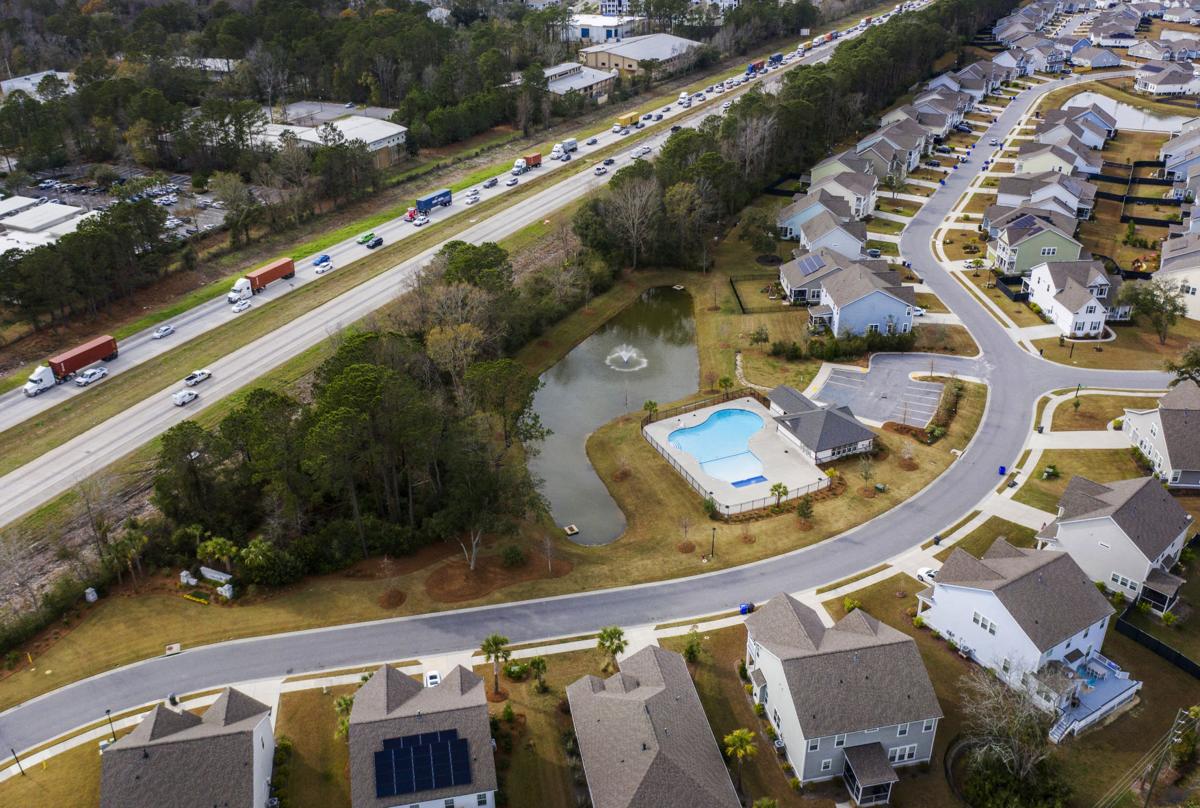 Traffic moves along Interstate 526 in Mount Pleasant next to the Tidal Walk subdivision on Monday Feb. 10, 2020. Now, the state plans to double the width of the highway from four to eight lanes. Gavin McIntyre/Staff 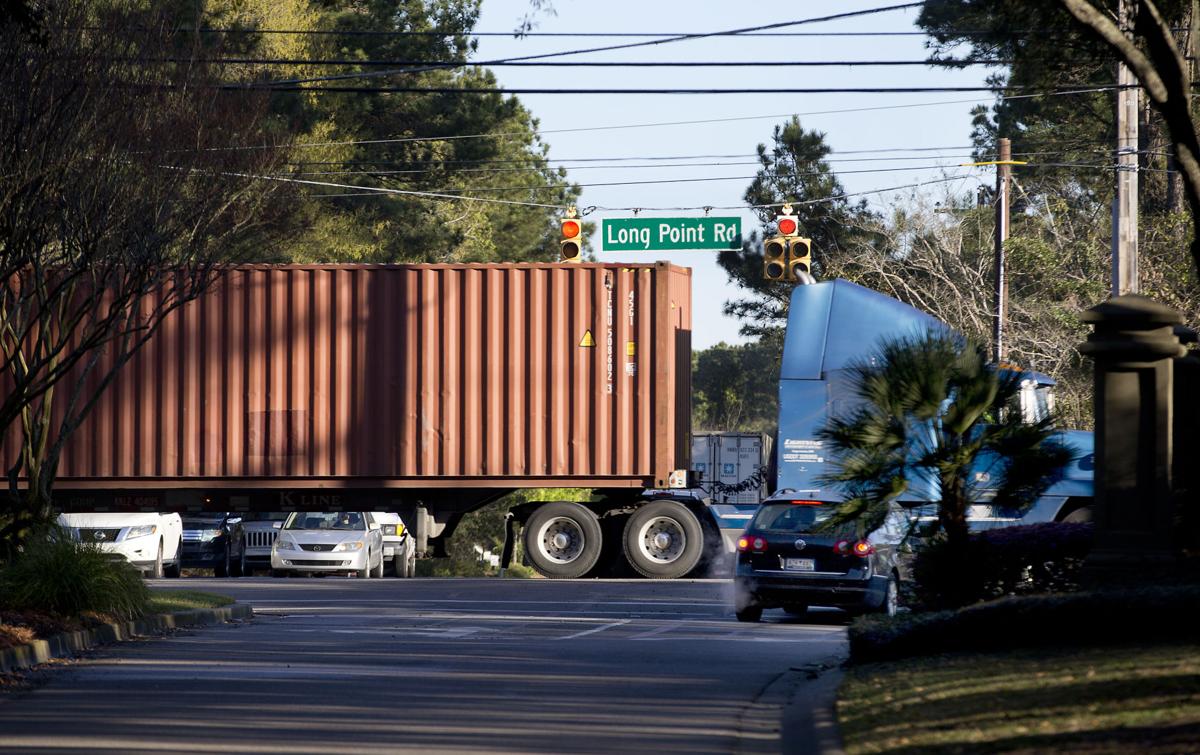 Truck traffic heads from the Port of Charleston's Wando Welch Terminal down Long Point Road on Monday, March 18, 2019, in Mount Pleasant. Now, the state plans to double the width of Interstate 526 from four to eight lanes, a project that could cost billions of dollars. Grace Beahm Alford/Staff

It was soon overwhelmed by the growth and development that followed.

Now the state plans to double the width of the highway — from four to eight lanes — end to end from West Ashley to Mount Pleasant.

Doing so could cost billions of dollars. And tolls, unheard of in the Charleston area, could be needed to pay for part of it.

Potentially alarming as well: Mount Pleasant homes and businesses near the highway could be threatened.

The S.C. Department of Transportation calls that section Lowcountry Corridor East. It's one of the state's most congested stretches of highway, and most of it is elevated so it can't be widened easily. It's a road that's crucial for commerce, for commuting and for fleeing the area if a hurricane's approaching.

It's also a mirror to the I-526 expansion on the other end of the highway, through West Ashley and North Charleston, which will impact about 300 homes and businesses and cost an estimated $1.1 billion.

Now, attention is turning to the remaining highway section from North Charleston across Daniel Island and into Mount Pleasant, which is expected to cost at least that much.

The Mark Clark Expressway, as I-526 is also known, is the main route for trucks carrying containers to and from the state's busiest port, Wando Welch Terminal in Mount Pleasant. It's also the primary route on and off Daniel Island. With two lanes in each direction, the traffic can be nightmarish when there's an accident.

Planning is just getting started and the real price tag for doubling the width of the interstate to Mount Pleasant won't become clear until details are worked out, but a billion dollars amounts to about 10 percent of the state's entire general fund budget.

“That’s never popular, but it’s a tool other states have used," she said.

From North Charleston to Mount Pleasant, widening the highway comes with costly added challenges including two large bridges — the Don Holt Bridge over the Cooper River and the James B. Edwards Bridge over the Wando River.

The Wando River bridge was briefly closed in May 2018 after one of the primary support cables was found to have snapped. Most lanes reopened the following month but the incident raised questions about whether the bridge should be replaced entirely as part of the planned widening.

“At some point those bridges have a life and they will expire," said Riley.

What to do about the bridges is one question traffic planners hope to answer as they refine plans over the next year. In West Ashley, where I-526 crosses the Ashley River via the Gen. William C. Westmoreland Bridge, plans call for adding lanes by building parallel bridges next to the existing one.

“526 East and West will be the biggest project DOT has ever taken on," Riley said.

$1.1 billion plan for interstates 526 and 26 will claim many North Charleston homes

Homes near the highway

In Mount Pleasant many homes and businesses are close to the expressway. It's not clear if any stand in the way of widening the highway, as more than 100 do in North Charleston, but road-widening would move traffic closer to residences.

"Please tell me they aren't going to do that," said Cacky Rivers, whose Mount Pleasant home in the CandleWood subdivision backs up to the interstate. "We'll never be able to sell this house."

Rivers said her family already uses sound machines to mask the highway noise and sleep at night. She said, however, that her main concern if the highway is widened is the impact on wildlife.

Rivers and other residents pointed out that trees and shrubs along the highway were recently cleared, removing habitat for birds and increasing noise. Riley said the clearing was unrelated to the widening project, and was routine maintenance.

“I think residents got comfortable with the vegetation we were not maintaining," Riley said. "With the gas tax increase, we now have a funding source."

The "east" section of Interstate 526 runs from North Charleston across Daniel Island and through Mount Pleasant.

The first public meetings for Lowcountry Corridor East will be held in late March.

"I would obviously like to hear more about what they plan to do and when the plan to do it," said Chad Jenkins, who lives in the Etiwan Pointe Townhomes development next to the interstate where it crosses the Wando River.

Both public meetings are on weeknights from 5 to 7 p.m. The dates and locations are:

Mount Pleasant Transportation Director Brad Morrison said the town has been briefed but there are many questions, including how the highway project will address truck traffic from Wando Welch Terminal.

Residents of several subdivisions already contend with Wando Terminal container truck traffic as they enter and exit their neighborhoods via Long Point Road.

"That's where the bottleneck is," Jenkins said.

State Ports Authority spokeswoman Liz Crumley said the authority has had initial talks with DOT about the road project and future plans for the Wando terminal.

"S.C. Ports is also looking for creative ways to help ease congestion, including a proposal to move a portion of containers between Wando Welch Terminal and the future Hugh K. Leatherman Sr. Terminal on barges rather than by trucks," she said.

Charleston City Councilwoman Marie Delcioppo represents Daniel Island, where she lives, and said most of the complaints she hears about I-526 involve truck traffic from the port.

However, the development of Daniel Island created a large share of the traffic on the highway and there's much more to come. A more than 9,000-home subdivision called Cainhoy Plantation is being developed on the Cainhoy peninsula above Daniel Island, and I-526 remains the only direct route to North Charleston and I-26.

Unlike North Charleston and Mount Pleasant, on Daniel Island few homes are located very close to the interstate.

Dana Beach, who retired in 2017 from running the Coastal Conservation League, warned in 1992 when I-526 was finished it could make traffic worse rather than better.

"By not controlling sprawl around the Mark Clark we will be wasting hundreds of millions of dollars in public funds and gaining nothing in terms of mobility," Beach said in a June 1992 Post and Courier article.

“It was really just a matter of looking at the history of these mega-projects and realizing that you can’t just build your way out of sprawl with more highway," Beach said Wednesday. “You look at growth in the area, automobile commuting and the lack of alternatives; it is not a difficult prediction to make."

Spending a billion dollars on public transit would be a better use of public funds, he said.

Will homes be taken?

Morrison is hopeful I-526 can be widened to eight lanes without the need to claim Mount Pleasant homes and businesses for the project.

Riley said it's possible that the interstate won't need to be widened in Mount Pleasant east of the Long Point Road interchange where most port truck traffic enters and exits the highway. That would mean the most disruptive impacts of the road project would be between Long Point Road and the Wando River.

The rest of the highway, Riley said, needs twice the lanes it has now and going from four lanes to six would not be enough.

“If we could wave a magic wand and make it six lanes today it would barely operate at a passing grade, maybe for a year or two," she said.

Carl Smith lives in a house in the Tidal Walk subdivision, near I-526 between Long Point Road and the Wando River Bridge.

"I'm not opposed to them widening the road, as long as they put in a sound wall," he said Tuesday over the noise of evening rush-hour traffic on the nearby highway. "I'm guessing it's at least five years away."

Riley said that if the highway is widened as planned, noise studies will be conducted to determine the need for sound walls. How many years could pass before the highway widening gets underway remains an open question.

The Post and Courier's coverage of the opening of Interstate 526, the Mark Clark Expressway, in 1992.

Questions about the Lowcountry Corridor project?

Test your knowledge of SC celebrities, Gullah culture with this week's news quiz