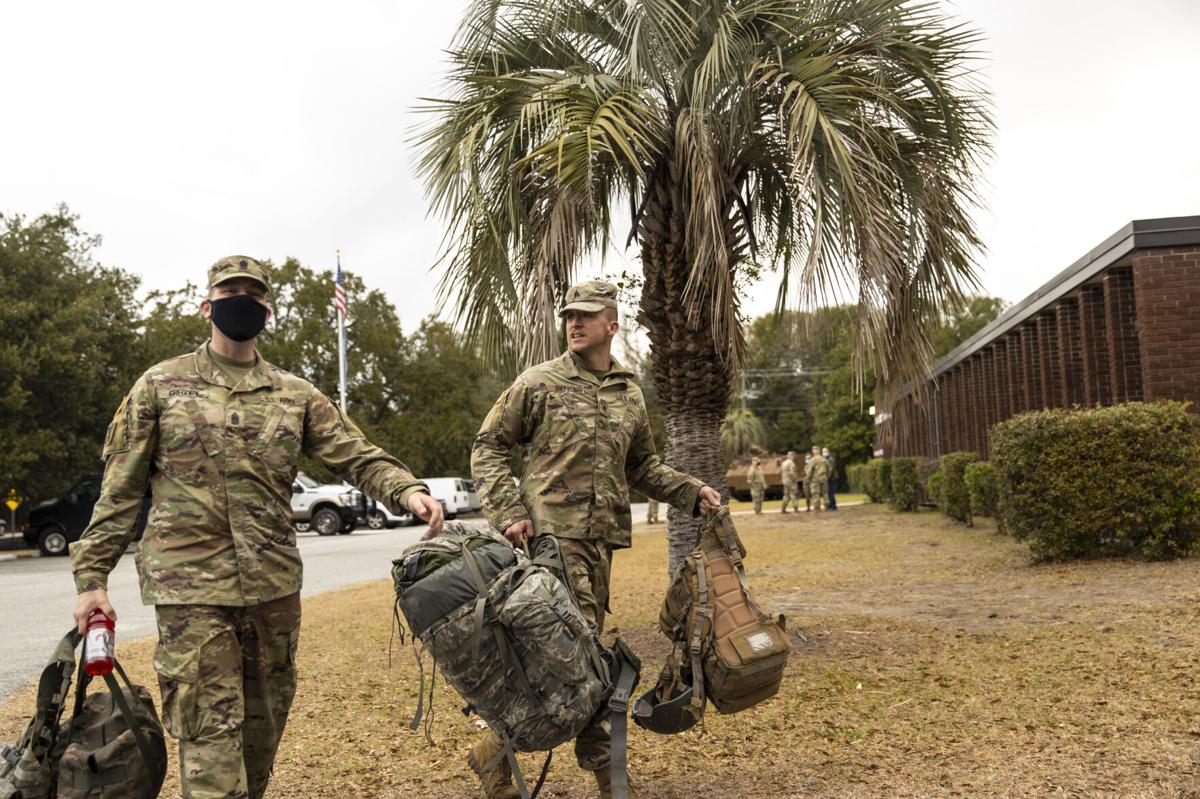 S.C. National Guardsman John Shytle (right) gets help with his bags from Sgt. Maj. Jason Gregory as they arrive home in Mount Pleasant on Monday, Jan. 25, 2021. The guard served in the District of Columbia in support of the presidential inauguration. A total of 671 guard members were deployed over the course of nine days. Andrew J. Whitaker/Staff 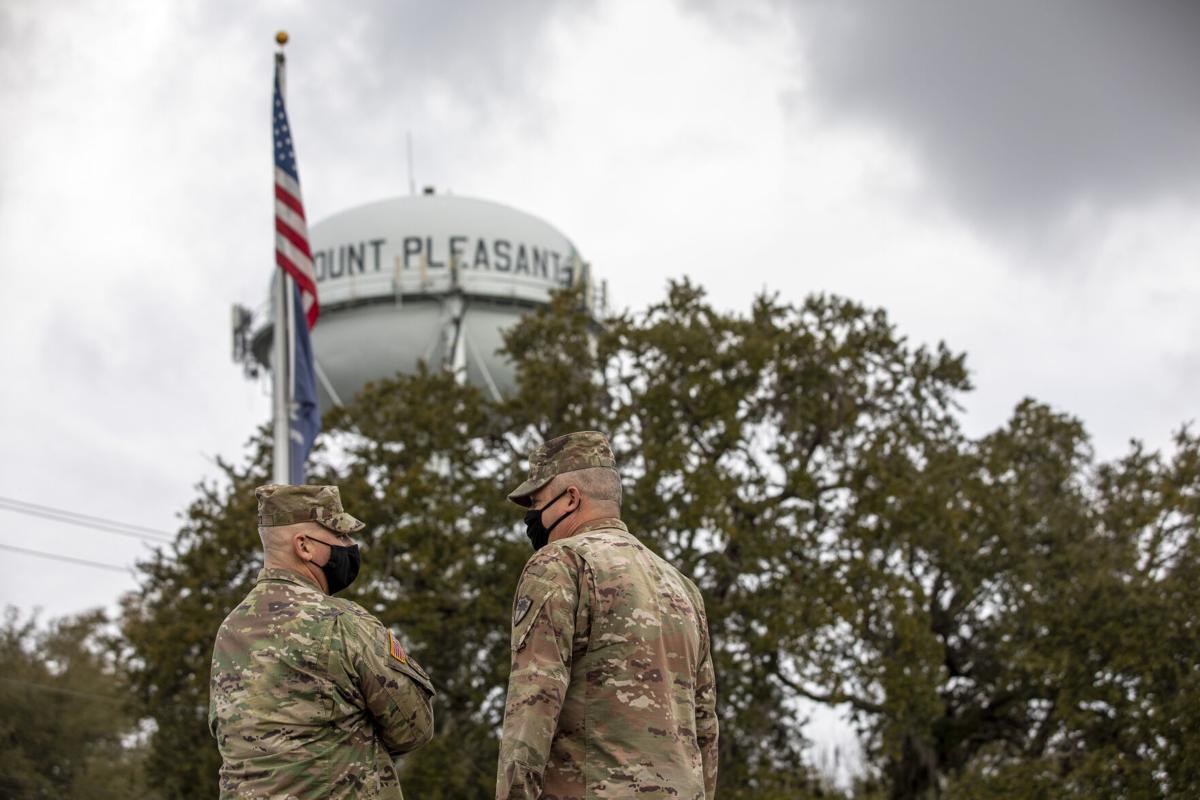 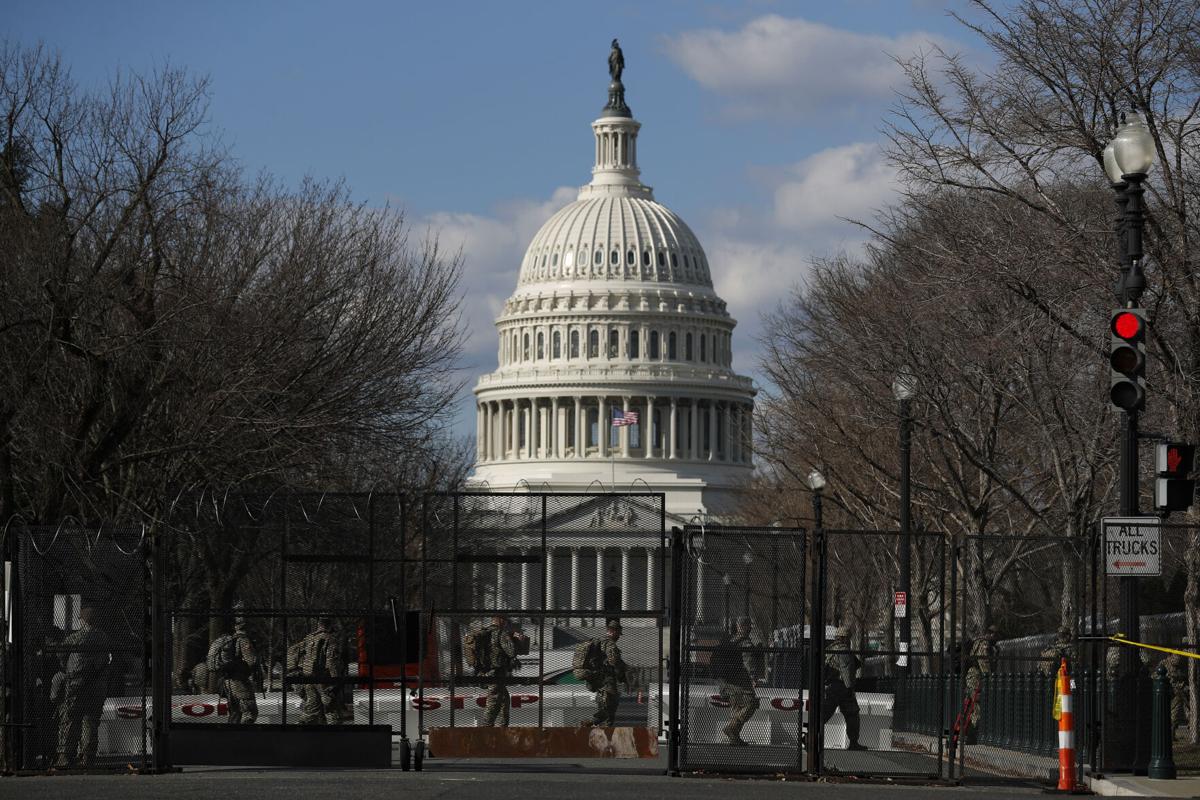 National Guard troops walk outside the Capitol as the security perimeter continues to shrink and many guard units head home, two days after the inauguration of President Joe Biden on Friday, Jan. 22, 2021, in Washington, D.C. Rebecca Blackwell/AP 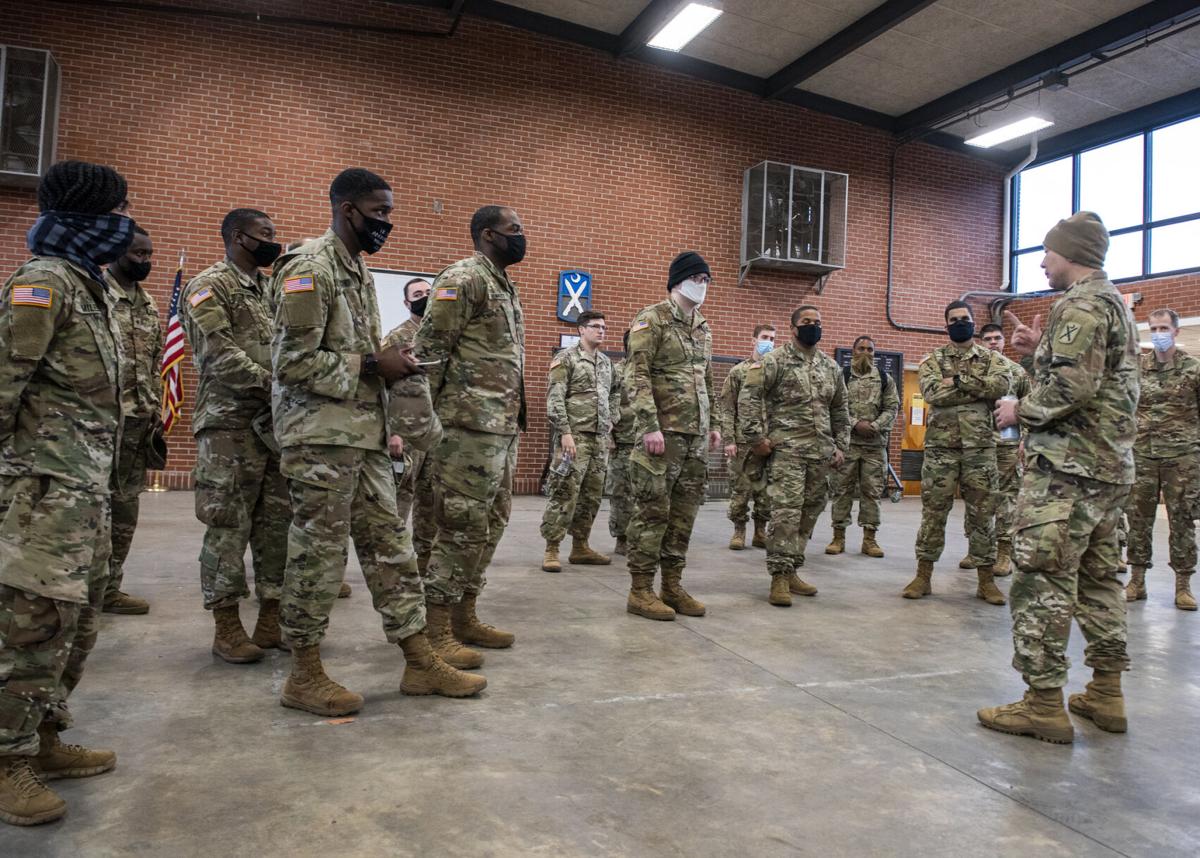 S.C. National Guardsman John Shytle (right) gets help with his bags from Sgt. Maj. Jason Gregory as they arrive home in Mount Pleasant on Monday, Jan. 25, 2021. The guard served in the District of Columbia in support of the presidential inauguration. A total of 671 guard members were deployed over the course of nine days. Andrew J. Whitaker/Staff

MOUNT PLEASANT — The buses pulled up in the predawn darkness Monday, filled with members of the S.C. National Guard returning from the most unusual presidential inauguration in living memory.

Their deployment to Washington, D.C., saw them thrust into mounting tensions and heightened security concerns in the nation's capital, which saw armed insurrectionists invade the Capitol building only two weeks prior.

In all, 671 South Carolina Guardsmen were deployed, some for as long as nine days, said Col. Edward Cloyd, commander of the 218th Movement Enhancement Brigade.

More than 15,000 guardsmen from around the country came to the capital and about 5,000 remain, authorities said.

For these guardsmen, who arrived at 7:30 a.m. at the armory on Mathis Ferry Road, it was time to return to their homes and to their families.

"It is good to be home — very proud of our service, very proud to be there during an important event in our country's history and very thankful for the families and the employers who saw us through," said Army Brig. Gen. Jeff Jones, deputy adjutant general for the South Carolina Military Department.

"It felt different with more soldiers there but you still felt a positive spirit there, and I can tell you that the people of Washington, D.C., and the Congress were very supportive," he added.

President Joe Biden's inauguration proceeded with only a handful of minor arrests and incidents on Wednesday, but the guard's deployment stirred controversy after photos emerged of soldiers forced to bunk in a cold parking garage.

The guard and Capitol Police later issued a joint statement saying they were coordinating to set up "appropriate spaces" within congressional buildings for on-duty breaks and that off-duty soldiers had hotel rooms or "other comfortable accommodations."

Jones said South Carolina guardsmen were assigned hotels while off duty, but there was a time period where the troops needed to sleep in the immediate area of the Capitol because D.C.'s bridges were closed and commanders wanted to ensure soldiers did not miss their assignments due to travel.

The commander said the experience was positive and that the entire South Carolina congressional delegation visited to lend encouragement and hand out food.

"They're thankful for what they've done," Jones said. "They're ready to get home to their families. They're ready to get back to their jobs. And that's what we do, whether it be for a hurricane or an inauguration, we do our duty and we get back home to our families and we get back to our jobs, and that's why I really feel they're Americans at their best. When our country calls, we're going to be there."

While in D.C., the unit's duties included manning traffic-control points, parking coordination and managing the flow of crowds.

Last year was hectic for the S.C. National Guard. In addition to numerous flooding events, hurricanes and a global pandemic, guardsmen were deployed to Washington, D.C., this summer amid racial justice protests and civil unrest.

Two members of the guard were struck by lightning in June while providing security outside the White House during the protest deployment, and D.C. Mayor Muriel Bowser ended up pushing them out of the city several days after their arrival.