The announcement was big news for the local economy in Dorchester County and South Carolina's political leaders.

Showa Denko Carbon, a manufacturer of electrodes used in the steel-making process, decided in 2011 it would expand its factory just outside of Ridgeville and increase its production capacity by 68 percent.

Local officials and Nikki Haley, who was in her first term as governor at the time, packed into the Dorchester County Council chamber to praise the company's growing relationship with the Palmetto State.

The S.C. Department of Commerce, by that point, agreed to give Showa Denko a $2 million grant in return for the company investing at least $200 million into its factory and adding another 100 workers to its payroll.

"When a company expands in South Carolina, it's a celebration, because it's commitment," Haley said at the event.

The grant Showa Denko received certainly was a commitment. The company signed a contract with the state to get that money.

But more than 10 years later, it has now been revealed that the company didn't follow through on all of the promises it made to South Carolina.

Newly released records show commerce officials allowed Showa Denko, and several dozen other businesses, to keep state grant funding even after they failed to meet all of the agreed-upon job and investment requirements.

The Commerce Department released the information on those deals last month in an effort to appease state lawmakers who have complained about a lack of transparency at the agency, which is responsible for recruiting new businesses to South Carolina.

But if state commerce officials expected the information to satisfy their critics, it didn't work.

Instead, it reignited efforts by a pair of legislators to increase oversight of the agency and to shine more light onto the millions of dollars in grants and tax incentives state officials provide to companies every year.

Sen. Dick Harpootlian, D-Columbia, and Sen. Wes Climer, R-Rock Hill, said the grant that was given to Showa Denko is a good example of why lawmakers need to make those business deals more transparent and accessible to the public.

Showa Denko completed the expansion of its factory in 2014 and surpassed its required $200 million investment. But the records show the company created less than half of the jobs it was obligated to produce within the time period outlined under its contract.

As a result, commerce officials could have clawed back a quarter of the money the state spent to help with the company's expansion. But they never did.

Instead, state officials quietly resolved the issue with the company's attorneys in 2016. In doing so, they determined Showa Denko's executives made a "good faith effort," and they allowed the company to keep half a million dollars in taxpayer money that could have been returned to the state.

Erik Doerring, an attorney who represented Showa Denko in those negotiations, said the state allowed the company to keep the grant funding because it invested an extra $140 million into its project. He said the grant funding was instrumental in the expansion, and he emphasized the business added jobs since then.

The electrode manufacturer wasn't the only company that didn't meet the terms of its contract though. According to Commerce Department records, similar situations played out with businesses that set up shop throughout South Carolina.

A recycling company in Florence County, for instance, created zero jobs after promising 25 new positions, but it got to keep the entire $55,000 grant it received from the state.

In Clarendon County, a startup company that manufactured floor pads created 60 of the 100 jobs it promised. But it was never forced to repay part of its $150,000 grant.

And a company manufacturing electric buses in Greenville County promised to expand its workforce by 400 people but only hired 297 individuals. Yet it got to hold onto the entire $1.5 million grant it negotiated with the state.

Alex Clark, a spokeswoman for the Commerce Department, said each of those decisions was made on a case-by-case basis after considering the "broader economic development environment."

Commerce officials, she said, weigh a number of factors: whether there were problems outside the company's control, whether the company struggled to find qualified workers and whether the business was located in a rural county where it is harder to recruit employers.

Harpootlian questioned whether state officials would have allowed the companies to keep the money if the process was more transparent and those decisions were openly debated and voted on in a public meeting.

"The concern here is that you have folks who didn't do what they said they were going to do and there's no sanction for it," Harpootlian said. "These are contracts. In the business world, you don't get to keep money when you fail to deliver."

Many of the economic development incentives the Commerce Department hands out to companies have been around for decades. But only recently have those business deals come under scrutiny.

Officials with the state Legislative Audit Council finalized a report last year on the biggest grant and tax incentive programs overseen by the agency.

The auditors reviewed more than $526 million in grants the state doled out to companies from 2009 to 2019, and they sampled some of the tax incentives that made hundreds of companies eligible to keep a combined $6.2 billion in state tax revenue.

The final report criticized the lack of transparency surrounding those economic development packages, and the findings raised questions about the state's oversight of the companies that receive those lucrative contracts. It also broadly mentioned how the state declined to claw back at least $7.6 million from companies that didn't meet all of their obligations under their contracts.

The Commerce Department, at the time, acknowledged the findings but pushed back against the report. In a letter, Commerce Secretary Bobby Hitt pointed out that the vast majority of the deals his team put together generated the jobs and investment that were promised.

The agency has also emphasized the importance of the incentive packages in attracting major corporations to South Carolina. That includes marquee companies such as Boeing, Volvo, BMW, Bridgestone, Mercedes-Benz and Michelin.

Harpootlian and Climer recognize the industries and economic growth the grants and tax incentives helped to generate. But they question why the details of those economic development deals continue to be cloaked in secrecy.

The Commerce Department, they said, does a great job of announcing when businesses choose to locate or expand in South Carolina. The agency also likes to advertise how many jobs those companies are projected to create.

But the follow through isn't there, Climer said. There is no easy or affordable way for taxpayers to learn how much each individual company stands to collect from the state through the grants and tax incentives, he said.

And, prior to last month, the Commerce Department never voluntarily revealed which companies fell short of their job creation and investment goals.

Clark, the agency's spokeswoman, said the list of companies that failed to follow through on their grant obligations over the past decade was provided as a "proactive step."

Those concessions are a start, Harpootlian said, but he and Climer plan to push for bigger changes in an effort to make the agency more accountable to taxpayers.

"The public has a right to know how its money is being spent," Harpootlian said. "There is going to be more transparency."

The two lawmakers are taking a scattershot approach in their attempt to reform South Carolina's economic development system.

They want to mandate that the Commerce Department, for the first time, disclose exactly how much each company is receiving through the grants and tax incentive deals each year.

They plan to increase the number of dedicated auditors at the S.C. Department of Revenue who scrutinize the companies that receive the state tax incentives.

Harpootlian, who sued the Commerce Department over a Freedom of Information Act request in 2019, also sponsored legislation that would limit what information and documents the agency can shield from the public under state law.

The biggest change the two lawmakers are pushing relates to the S.C. Coordinating Council for Economic Development. Most people have probably never heard of that group, but it's arguably one of the most powerful governmental bodies in South Carolina.

The council consists of the directors of 11 state agencies and the body is chaired by South Carolina's commerce secretary.

Its primary purpose is to sign off on the deals that commerce officials negotiate with companies. The group makes all of those decisions behind closed doors in executive session to protect the identity of the businesses the state is negotiating with.

It's that secrecy and loose accountability that has Climer and Harpootlian concerned.

They can understand the necessity to privately discuss potential deals before they are finalized. But the state lawmakers question whether the council thinks for itself or if it is just a "rubber stamp" for the Commerce Department.

An unnamed member of the coordinating council told the legislative auditors last year they could not remember a time when a company applied for a grant or tax break and was turned down by the council.

That shows there is no check on the Commerce Department, Climer said.

To try to correct that, Climer wants to add four state lawmakers to the coordinating council. The hope, he said, is that those new members will bring some transparency to the council and make it more accountable to taxpayers.

The only current member of the council that is elected by voters, Climer pointed out, is the agriculture secretary. Everyone else on the body are political appointees.

Climer and Harpootlian also want to remove the council's ability to forgive companies that don't follow through on their contracts.

It was the coordinating council that ultimately allowed Showa Denko and the other businesses to keep the state's money after failing to fully follow through on its commitments.

That needs to end, Climer said. He is going to ask lawmakers to transfer that power to the state's Fiscal Accountability Authority.

"You'll no longer have the fox guarding the hen house," Climer said. 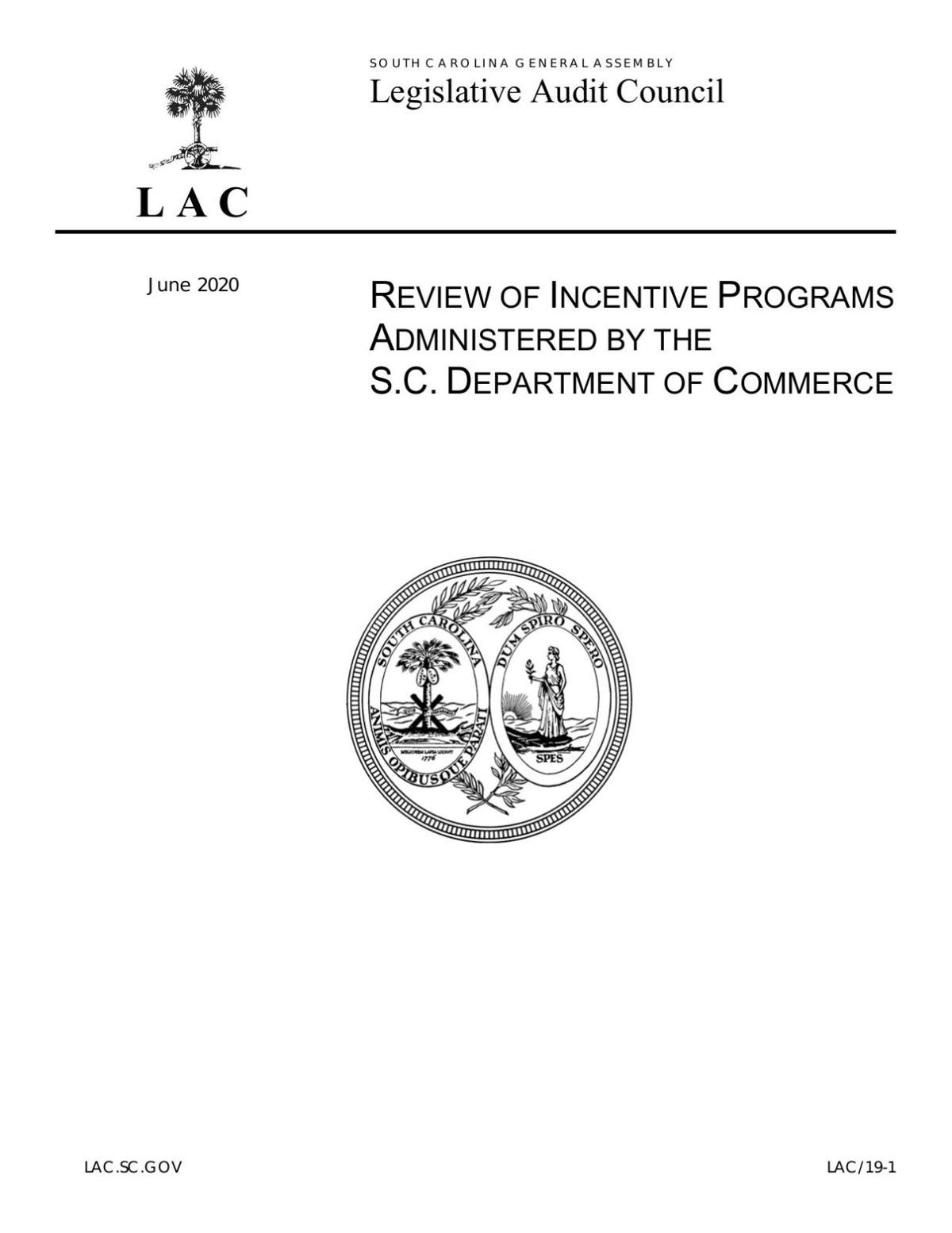