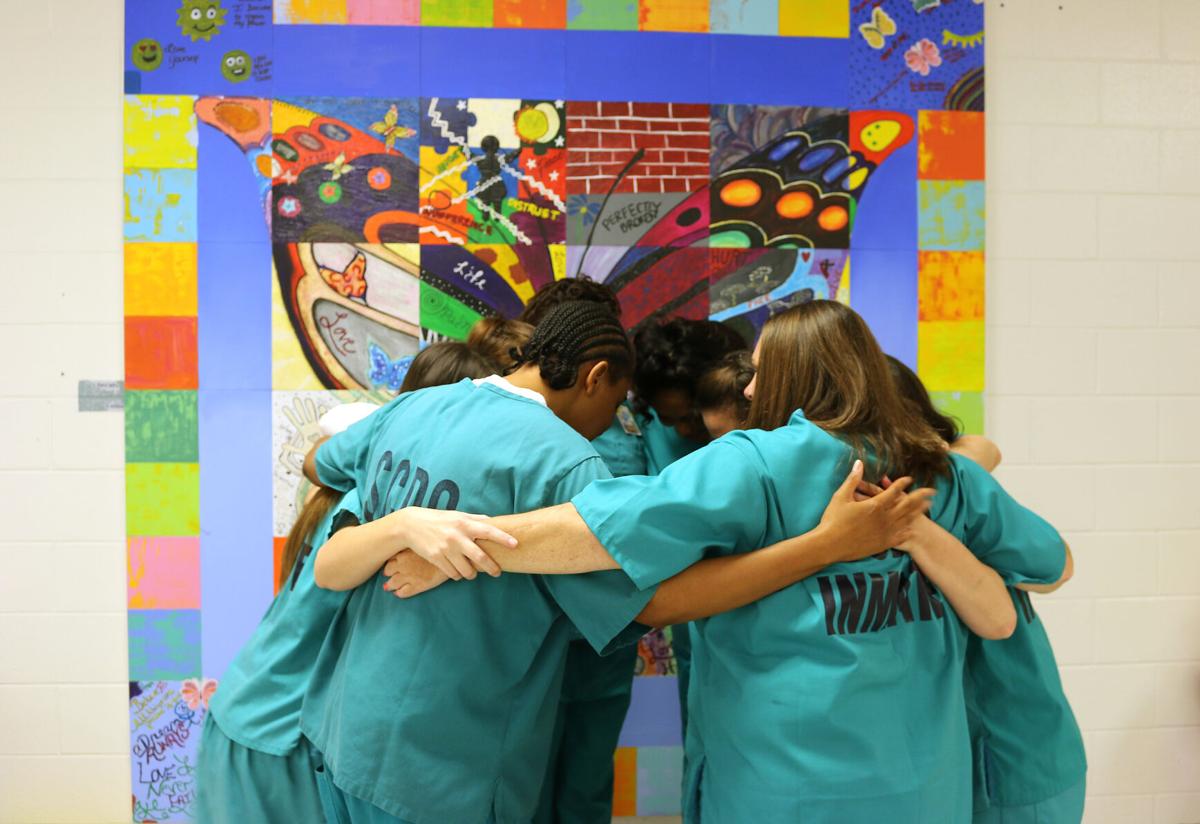 Inmates hug in front of the installation at Leath Correctional Institution. South Carolina Department of Corrections/Provided. 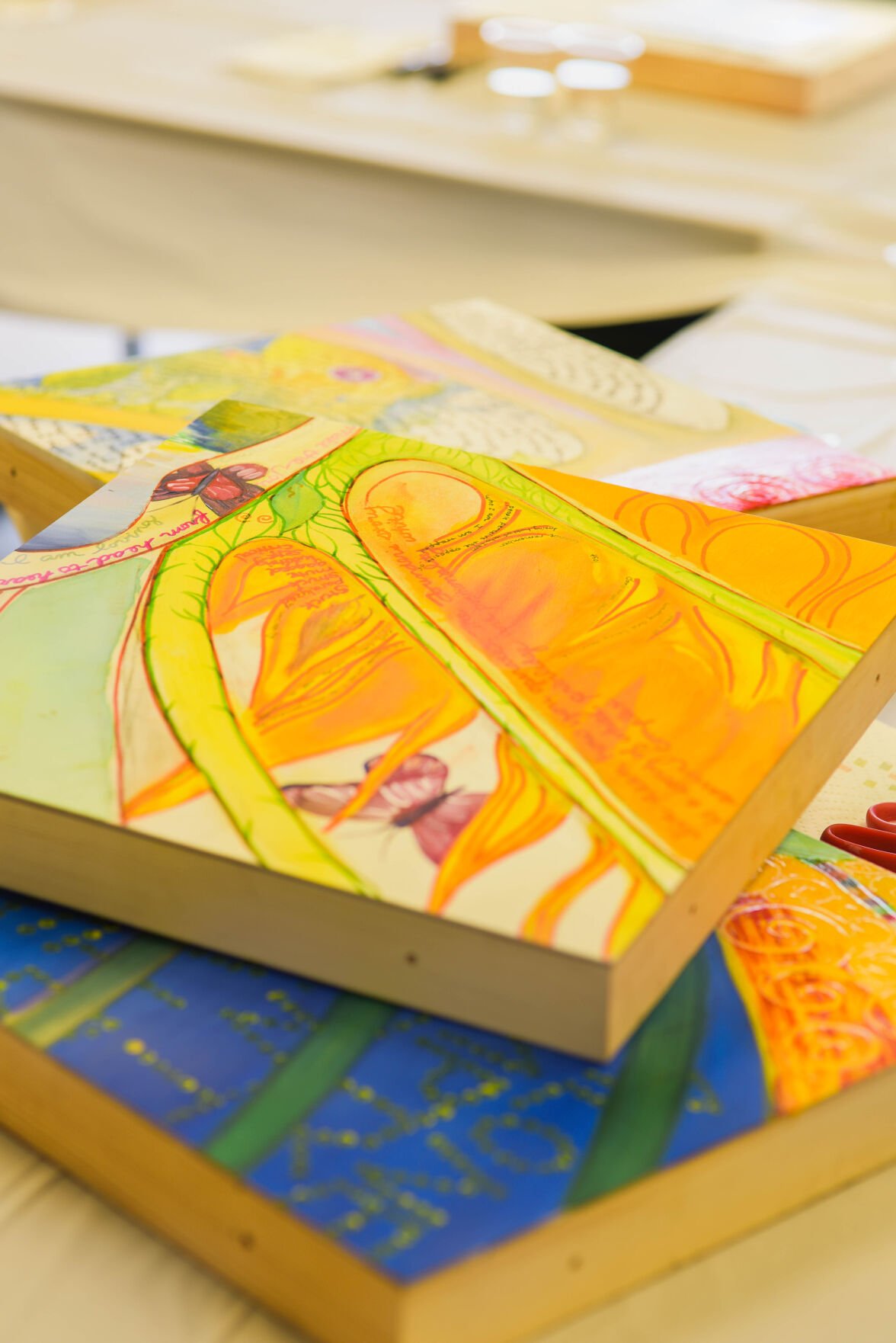 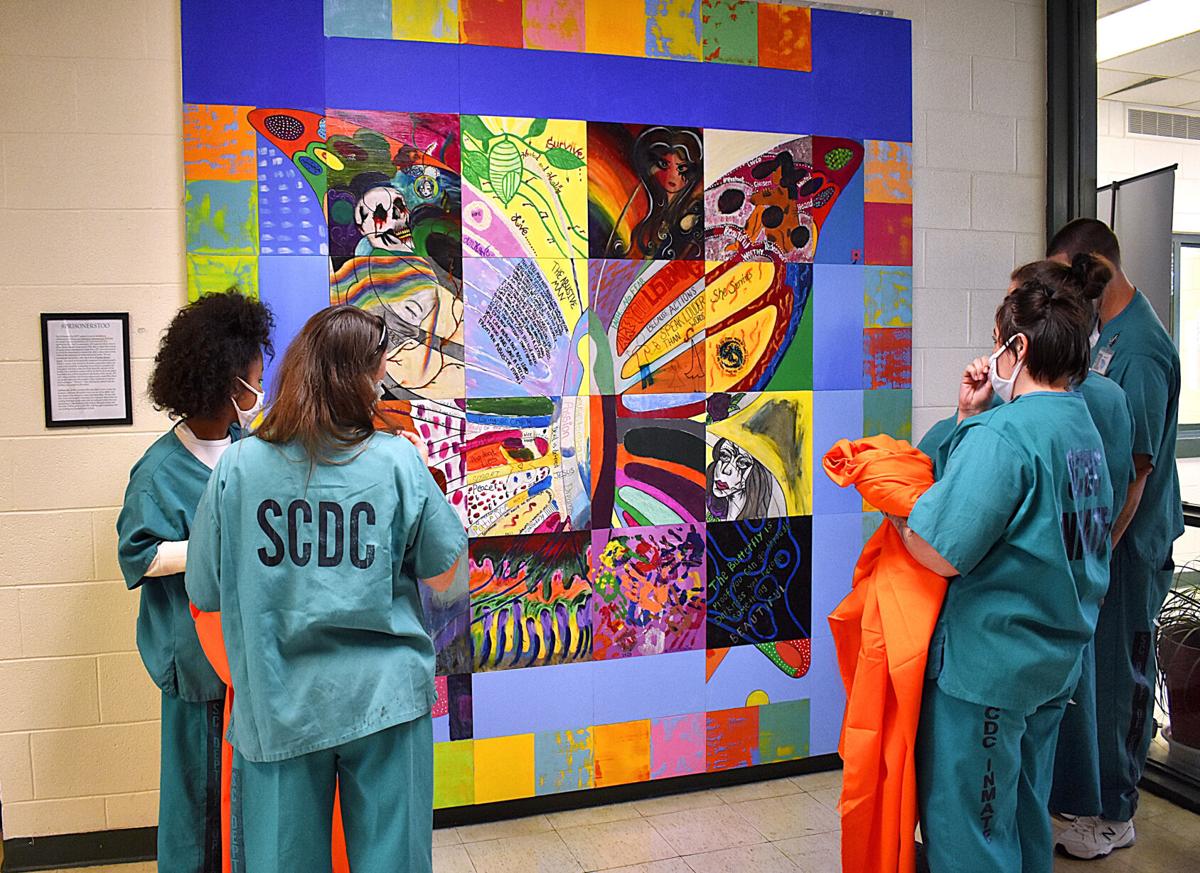 At two women’s prisons in South Carolina, butterfly wings spread out across the walls.

The murals, at Leath and Camille Graham correctional institutions, are the first stage of a project focused on healing for inmates who have survived sexual and domestic violence.

Artist Cathy Salser guided 32 inmates, each of whom decorated one of the 16 panels that make up a butterfly. They painted scenes and scrawled poetry that reminded them of their abuse — and the healing that they’ve been able to do since.

“In the beginning we didn’t know what we were getting into, so I was really kind of scared,” one Leath inmate said. “You don’t want people to know the dirty secrets you have. And we just displayed those dirty secrets on a board, imagine that.”

The Post and Courier doesn’t identify victims of sexual assault.

The program, organized by the S.C. Department of Corrections and Just Detention International, is part of an ongoing project aimed at helping inmates process and heal from the abuse they’ve suffered.

Tara Graham, JDI’s national program director, said a disproportionate number of female inmates have experienced traumatic violence themselves, so addressing the past is key to the organization’s mission of stopping rape behind bars.

“There was this idea of that time in that institution as a tool for growing stronger … the women had come up with the symbol of a cocoon,” Salser said. “The invitation is to create something that for them is going to become their own lived journey."

A Camille Graham inmate said the program empowered her to let go of some emotions and focus on bringing change, whether that's by providing support for her fellow inmates or advocating for change beyond the prison's walls.

For her, the best part of the project wasn't the mural, but a series of tinier butterflies, cut from the teal cloth of the women's uniforms. Each woman decorated a couple of the palm-size insects: one to keep as a comfort item, and another to send to a legislator or activist.

Many in criminal justice system need mental health treatment, but resources are strained

She said she hopes the mementoes will inspire lawmakers to take abuse into account when addressing criminal justice, especially for victims who hurt their attackers in self-defense.

The effects weren’t just emotional. During one session, Salser said, an inmate learned that there was no statute of limitations preventing her from reporting an assault, and she immediately reported it to Kenneth James, SCDC's Prison Rape Elimination Act coordinator.

"We've asked for a substantial amount of mental health support over the last few years. ... One of the things we try to do is get people on the right track," SCDC Director Bryan Stirling said. "This fits hand in glove with what we're doing."

Organizers hope to expand the program so more inmates can participate, and invite staff and inmates to engage with the existing murals with removable butterflies they can add their contributions to. SCDC wants to add a program in men's prisons as well.